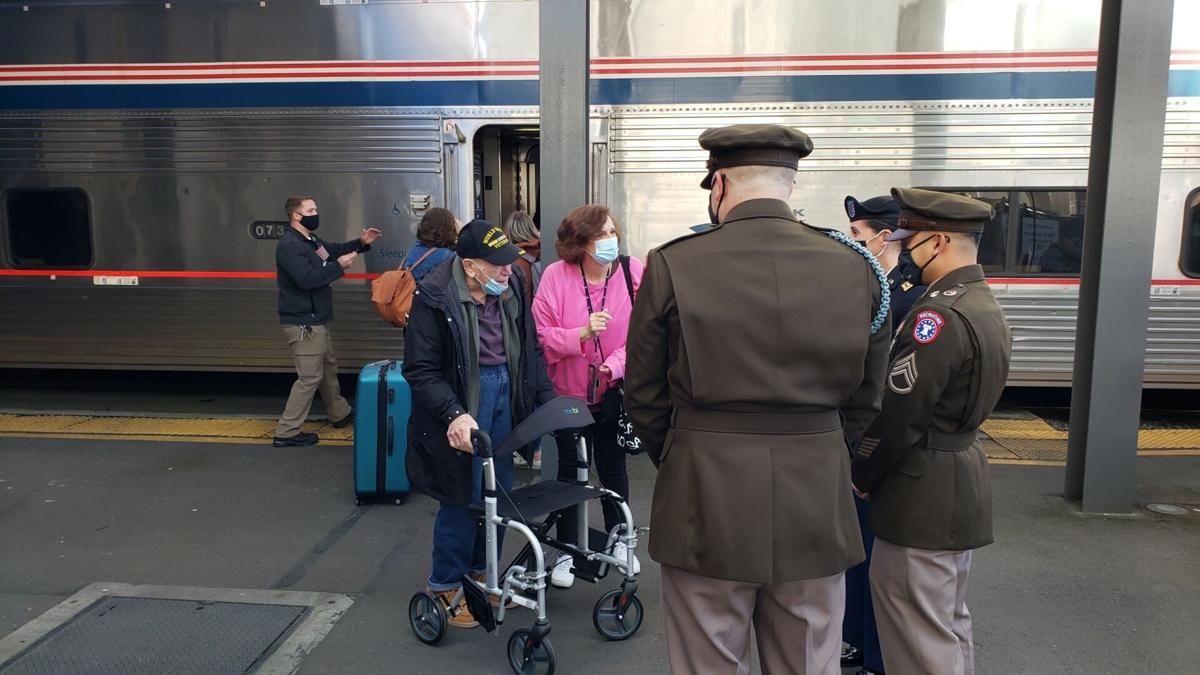 Recruiters with the Seattle Army Recruiting Battalion greet WWII and Army veteran James Edward Reed and his daughter Marybeth Reed, as they arrive at the King Street Station, Seattle, Oct. 15, 2020. The journey marked a milestone for Reed, who always desired to travel aboard the Empire Builder (Amtrak) train from St. Paul/Minneapolis to Seattle. (Photo Credit: Nicole Celestine) 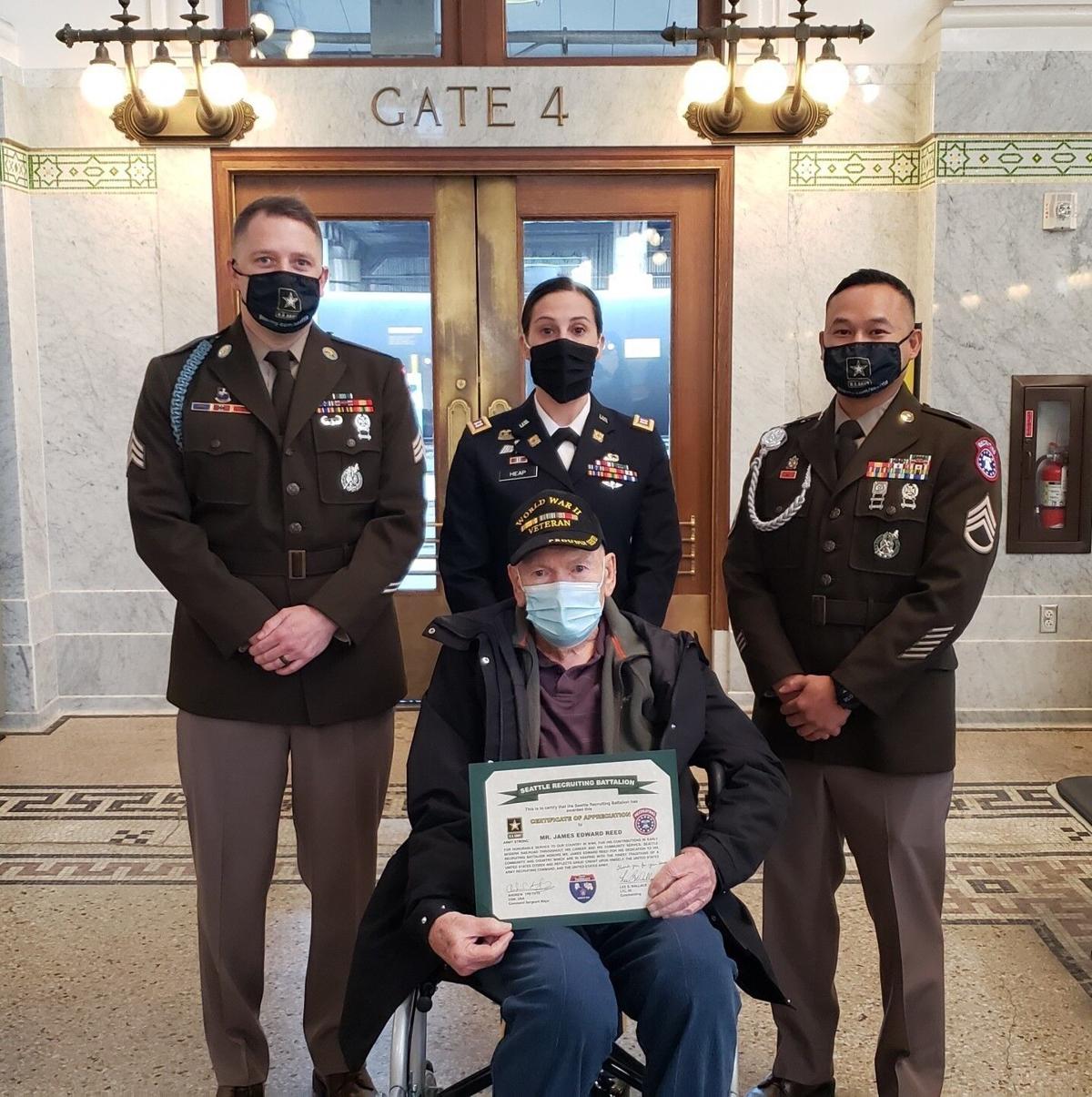 Recruiters with the Seattle Army Recruiting Battalion greet WWII and Army veteran James Edward Reed and his daughter Marybeth Reed, as they arrive at the King Street Station, Seattle, Oct. 15, 2020. The journey marked a milestone for Reed, who always desired to travel aboard the Empire Builder (Amtrak) train from St. Paul/Minneapolis to Seattle. (Photo Credit: Nicole Celestine)

SEATTLE — As the train pulled into the King Street Station at 9:50 a.m. on Oct. 15, 2020, Army Cpl. James Edward Reed achieved yet another milestone: traveling from St. Paul/Minneapolis to the West Coast aboard the Amtrak Empire Builder train. What was even more special about this journey was that the 97-year-old World War II veteran accomplished it before taking his last breath.

What began as a request from his daughter Marybeth Reed for special accommodations on Amtrak to visit The Plains, Cascades, Rockies and Pacific Northwest, grew into a special welcome reception complete with gifts, tokens of appreciation and much applause from Amtrak, the Seattle Army Recruiting Battalion, friends and well-wishers and the wider Seattle community. The American Legion coordinated a special Bon Voyage ceremony for his departure after his one-day round trip.

When the battalion got the call from Lora Hastings, Amtrak Operations Supervisor, it knew it needed to honor the Red Wing, Minn., native, who is terminally ill.

According to Heap, the battalion got involved because, “It is so important to recognize our military veterans. Today, the Battalion paid homage to Mr. Reed’s achievements and sacrifices. We were able to do that in front of his family as well as the Seattle community. What an opportunity it was to be able to honor Mr. Reed, acknowledge his daughter Marybeth, and show that [Reed and his family’s] support has added value for the greater good of the community.”

Reed’s connection with the railroad goes back 80 years, when he began working for the CBnQ (present-day Burlington Northern Railroad) at 17. The company kept Reed’s position after he got drafted as an Army Signal Operator and throughout his deployment to North Africa and Italy during World War II. Reed served from 1942 to 1945.

Marybeth said both she and her father were deeply touched by the reception and Army recognition.

“My father is a sweet, gentle man who would never ask for anything for himself,” she said. “He generously gave to our country through his service in World War II, to the history of early to modern railroad through his career, and to his community through church and other charitable causes.”

Memories of his time during World War II included reuniting with his older brother who was an Army Air Corps bomber pilot while in Italy. According to Reed, on that particular occasion, his brother (a captain at the time) had dinner with him (then a private) and other enlisted service members. He also remembered the excitement he and other service members felt when American actress Grace Field invited them to her home in Capri, Italy, for “r ‘n r” (rest and relaxation).

“It was so moving to witness Mr. Reed debarking from the train, looking up into the crowd, recognizing those of us in our service uniforms, and being immediately brought to tears,” Heap said. “In that moment, it struck me that this Army family is lifelong and has unspoken connections and meaning.”

Reed advises anyone considering military service to follow their talents and know their strengths. In his case, he had prior experience in telegraphy, or Morse code, and said a job in Signal Corps was the right fit for him. Regarding parents of youth and young adults considering military service, he said, “Those who’ve been in the service understand it’s bigger than themselves.”

According to the U.S. Department of Veterans Affairs, about 300,000 American WWII veterans are alive in 2020.

While the reality of a COVID-19 vaccine inches closer, the team at Operation Warp …

FORT BENNING, Ga. – Those who train the Army's tank crews and cavalry scouts have …