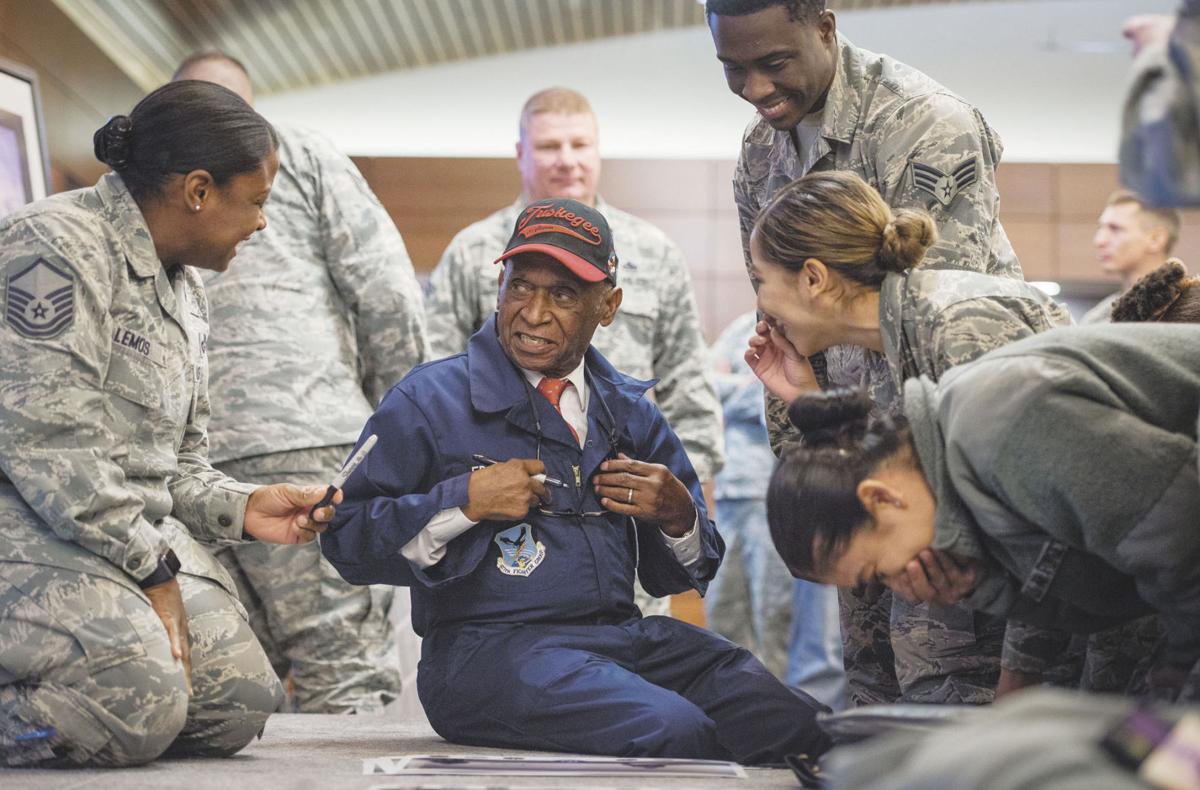 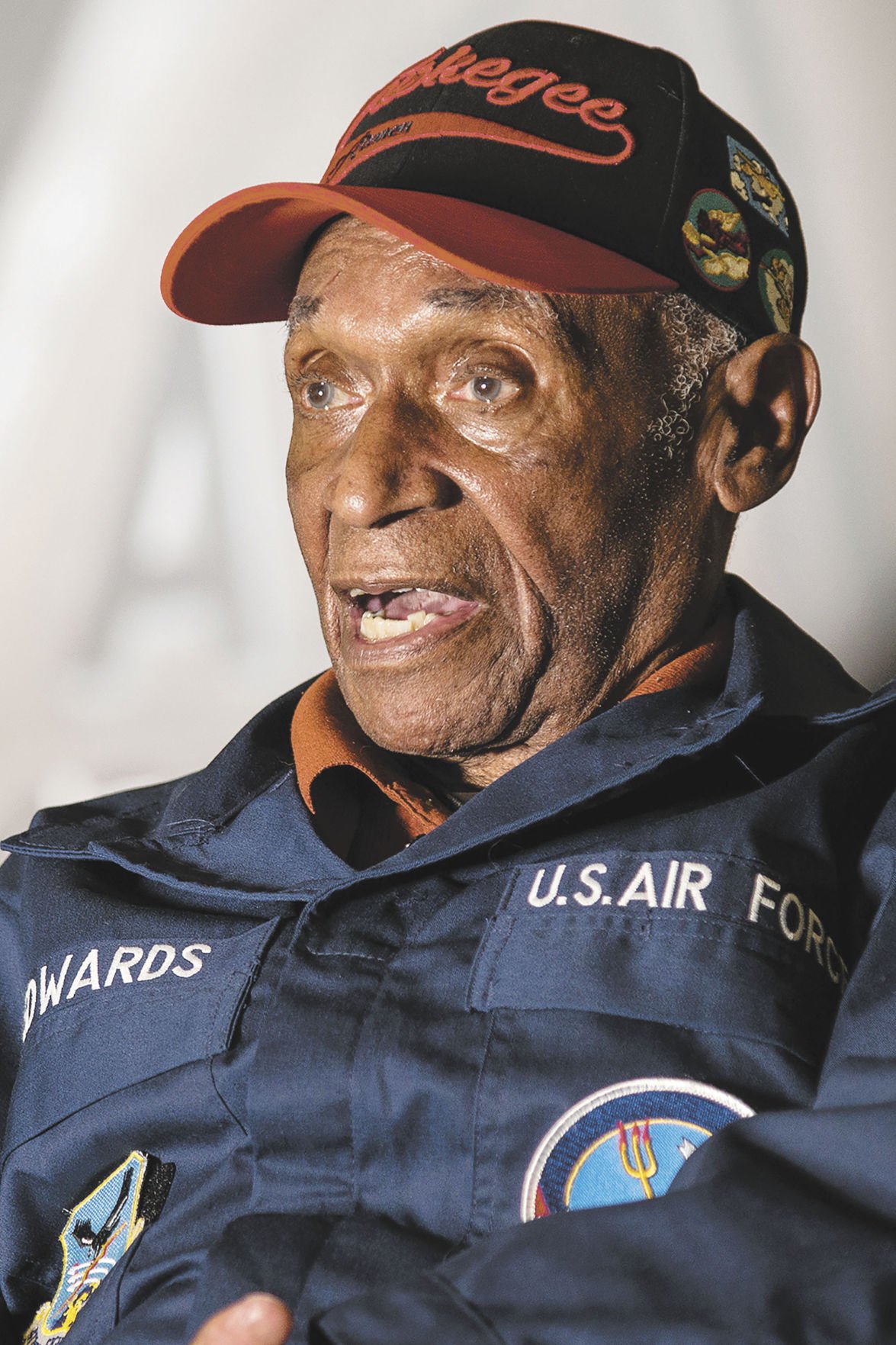 Army Air Corps Staff Sgt. Leslie Edwards braced himself against the roaring might of an F-22 Raptor as nearly 70,000 pounds of thrust threatened to rip his signature red-and-black Tuskegee Airmen cap from his head – a dramatic change from the aircraft of his day.

On a mound overlooking the flightline at Joint Base Elmendorf-Richardson, Edwards watched the 44-foot wingspan of the Raptor zoom by before soaring into the wild blue yonder.

Edwards, a Tuskegee Airmen and the last surviving member of the 477th Bombardment Group, looked on as the F-22 – through its tail flash – continued the legacy of his former unit. The changes in aircraft seem to mirror the changes in society through the years. Breaking sound barriers and breaking racial barriers have something in common.

“[The military] showed how to make it a better nation,” Edwards said. “And a whole lot of other institutions in America had an example of how we could live better as human beings.”

Progress, however, can at times be slow.

Edwards was born in August 1924 in Memphis, Tennessee. Later, his family migrated to Ohio to escape the threat of the Ku Klux Klan.

“[Living in Memphis at the time], … a black man getting lynched was a probability,” Edwards said.

But he would grow to discover Ohio wasn’t too far from the old South; limitations, while not as prevalent, were still in place. By 19, the industrious Edwards had worked most of his life, performing any job that would lead to an honest living.

“[Some were] dangerous jobs; and unhealthy jobs,” he said, recalling working on the gut line in a meat packing plant. “There were a lot of safety hazards. [They weren’t] jobs that caused anybody to have respect.”

Edwards discovered he would be joining the military in 1943. Uncle Sam, with the postman’s notice, drafted him into the selective service.

“I knew when I got the notice that my wife was going to give birth,” he said. “And I knew I would probably not be around when my first child would be born. I let them know I didn’t like it, but they said, ‘we don’t care about what you like.’”

Poked and prodded, tested and re-tested, after a series of evaluations Edwards discovered he would be heading to Sheppard Field, Texas, to train as an aircraft mechanic. Although he was combating racism at home, he would train to fight fascism abroad.

“They started selecting a few blacks to fit in the Air Corps,” Edwards said. “That’s what they did – fit blacks into the experiment to see the reason they would fail. But they didn’t fail.”

It was in military training Edwards realized his potential, and even his preconceived ideas of inferiority were proven wrong.

Through will, perseverance and the support of his contemporaries, Edwards completed his training. And because of his commitment and attention to detail, he would later be hand-selected by then-Col. Benjamin Davis and put in charge of four B-25 Mitchell bombers.

“There were a lot of guys around me who saw there was something about me that I didn’t know I had,” Edwards said. “They saw I had potential, and they let me know I could do it. See, I had conditioned myself to think I was a low achiever. Now I’m taking training that’s telling me I’m not a low achiever.”

Following his training, Edwards traveled to his first duty station as part of an integrated squadron tasked with fighting alongside Chinese service members in the Pacific. It was not a question of color, but ability.

“It was a good fit,” he said. “[The white Airmen] knew how to get it. They didn’t hesitate. … We were having so much appreciation for each other as mechanics.”

When the sun  set and tools were packed, mechanics did as mechanics are wont to do – crack open beers and toast a job well done.

But the good times came to an end with the call for segregation; Edwards was transferred to the 477th Bombardment Group.

“The order came down that we had to separate the whites from the blacks,” Edwards said. “That was one of the worst things that ever happened in my military career.”

In its history, the 477th BG hit racial barriers unlike any other U.S. military outfit in World War II.

Low morale and leadership with segregationist attitudes led to the darkest day in the unit’s history – the “Freeman Field Mutiny.”

“I was there,” Edwards said.

Black officers at Freeman Field, Indiana, were denied entry into recreational facilities, and in a peaceful act of defiance, groups of black officers attempted to enter one of the segregated facilities.

Then-lieutenants Roger Terry and Coleman Young devised a plan to send black officers three at a time. In this fashion the officers attempted to enter, and were subsequently arrested. The total reached 103 by day’s end.

“They knew the regulation,” Edwards said. “Regulation 210-10, paragraph 19, makes it clear that on a military base you cannot restrict any officer from any recreational activity that was available for officers.”

Of the more than 100 arrests made, only three men were court-martialed; two were instantly acquitted. Terry was found guilty of “jostling” an officer. He was fined $150, reduced in rank and dishonorably discharged.

Nearly 50 years would pass following Terry’s conviction, before the Army pardoned him, restored his rank and gave him back his $150.

It has been said this act of civil disobedience was instrumental in President Truman issuing Executive Order 9981, which desegregated the U.S. military.

“It doesn’t matter whether you’re short or tall, black or white, male or female – it’s about performance,” Edwards said. “When you see a female with those captain bars on, you know she got them because she performs. And you respect that. And if you don’t respect that, you don’t belong with this group.”

Through the Tuskegee program, almost 1,000 pilots and more than 15,000 ground personnel were trained. What was expected to be a failed experiment of black pilots in the military flourished.

As the F-22 is technologically worlds ahead of the B-25 bomber, so is the social climate of today different to the 1940s.

Despite the progress, there is still work to do.