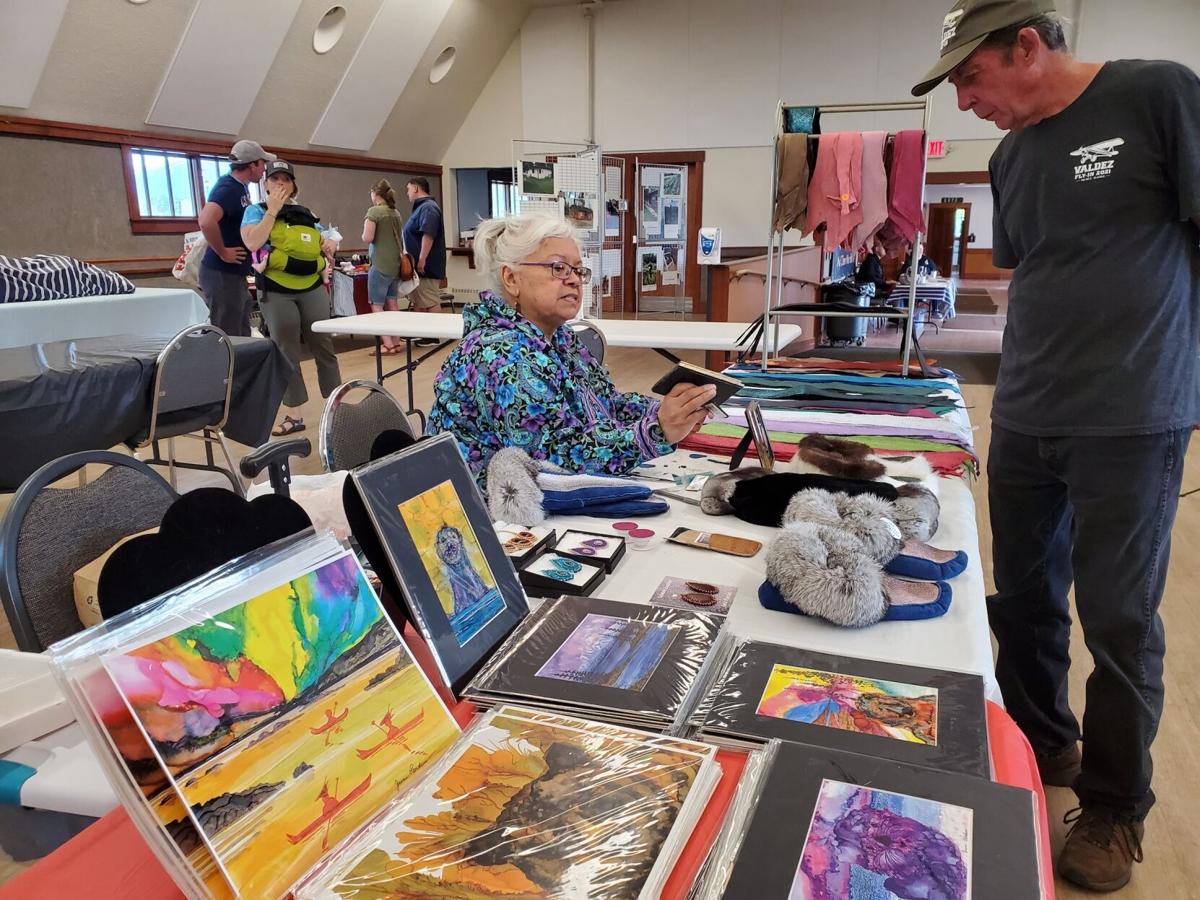 June Pardue sells handcrafted fish skin clothing and other items inside the Palmer Depot during the first Alaska Native Marketplace. 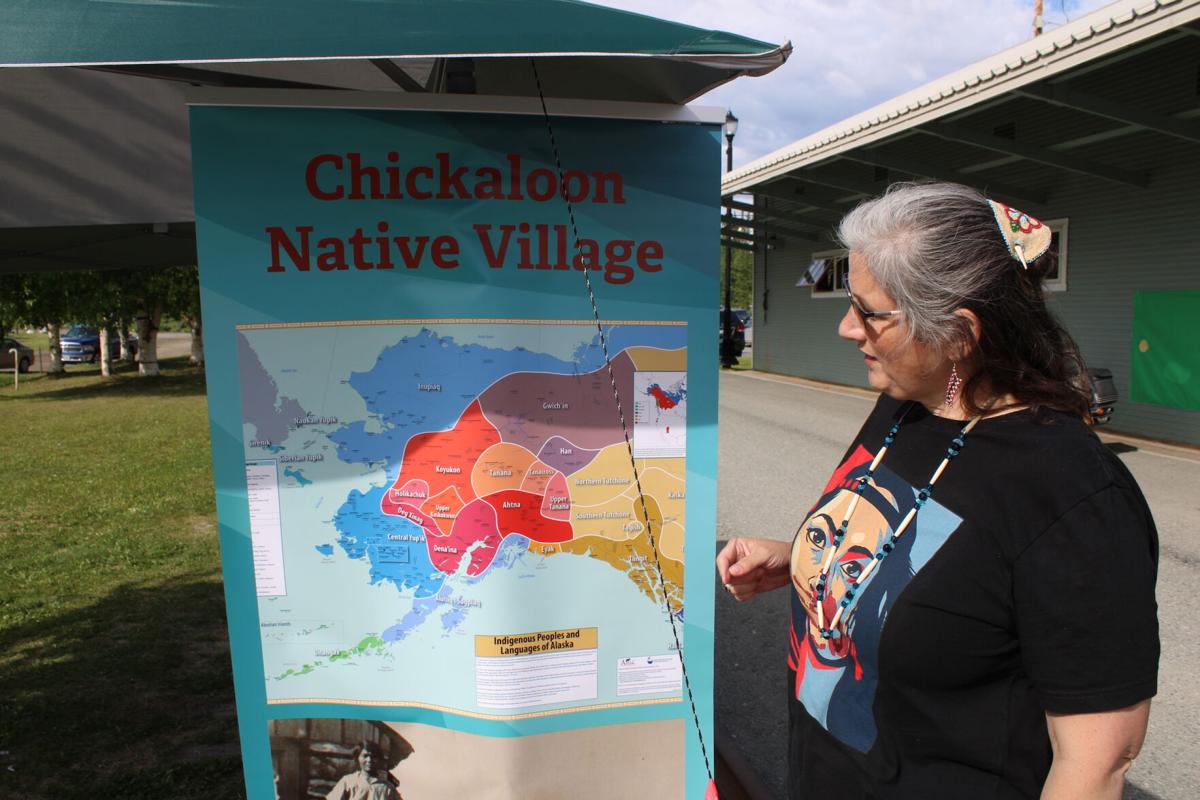 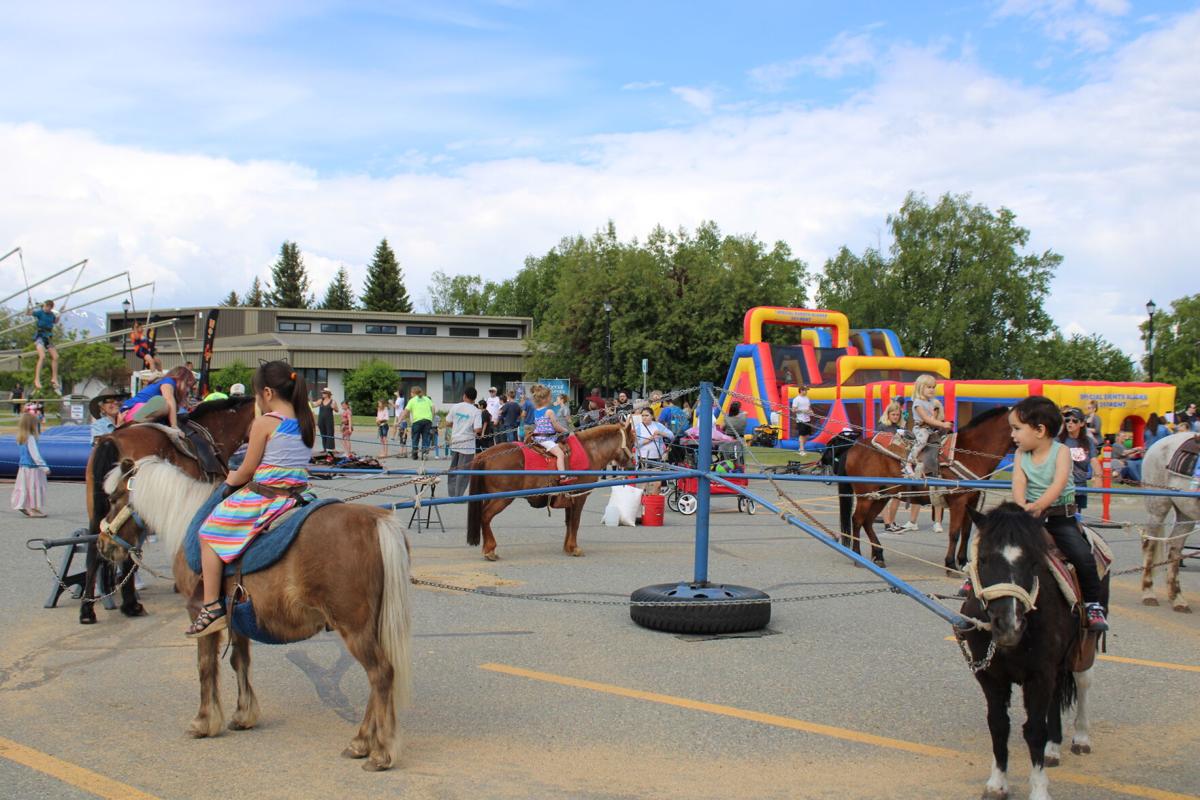 Children ride horses and enjoy carnival games in front of the Palmer Library during the second day of Colony Days. 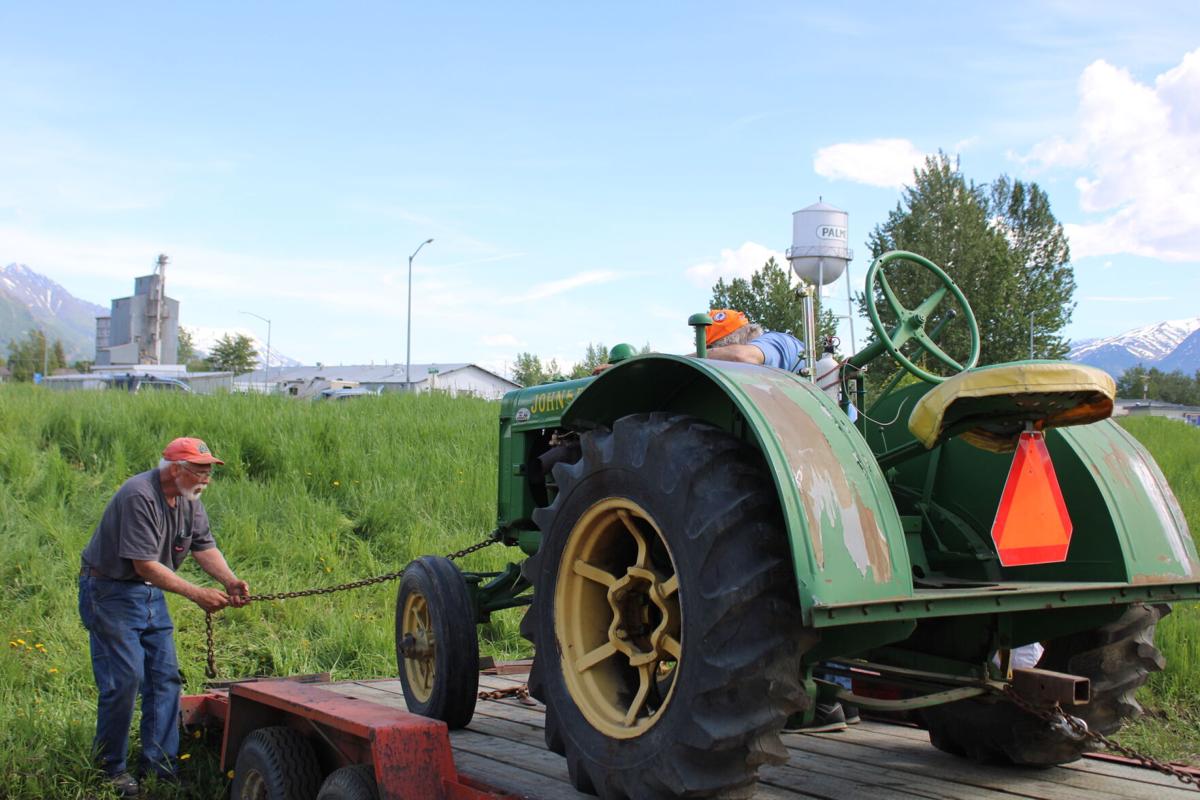 Antique Power Club of Alaska member Richard Greeno loads an antique tractor onto a trailer after the Colony Days parade and the subsequent tractor pull hosted by his club.

June Pardue sells handcrafted fish skin clothing and other items inside the Palmer Depot during the first Alaska Native Marketplace.

Children ride horses and enjoy carnival games in front of the Palmer Library during the second day of Colony Days.

Antique Power Club of Alaska member Richard Greeno loads an antique tractor onto a trailer after the Colony Days parade and the subsequent tractor pull hosted by his club.

PALMER — The annual Colony Days three-day festival returned from its pandemic slumber with high attendance and plenty of opportunities for community connection through new and familiar points of interest throughout the weekend.

One of the most prominent additions to Colony Days was the first Alaska Native Marketplace held inside the Palmer Train Depot in collaboration with Alaska native organizations such as Chickaloon Village Traditional Council and Knik Tribal Council, featuring Alaska Native artisans selling a variety of handcrafted creations.

Ortega-Chiolero said that events like these help them raise awareness for their organization and efforts from similar organizations working to connect Alaska Native children to their elders and their culture. She said that she purchased an assortment of items from Alaska Native Vendors.

Ortega-Chiolero formerly worked as the director of the Palmer Museum of History and Art. She said that she was involved with Colony Days for several years, and this was the first year she’s seen this level of Alaska Native incorporation in the event.

“There’s a bunch of different cultures represented here. It’s good to finally see that happen. It should have happened years ago,” Ortega-Chiolero said. “I got the be on the other end… Working at the Palmer Museum, I always heard visitors say they want to learn more... Up until now, it’s been a pretty one sided history. I feel like they’re gonna have a richer Colony Days experience… Palmer’s story began way before the colony project and I feel like that’s something a lot of people don’t know for many reasons.”

Chickaloon tribal historic preservation officer Angie Wade said that several Alaska Native cultures travelled and traded across the area long before it was ever called the Mat-Su Valley, with numerous overlaps.

“People were here,” Wade said. “I went to Palmer High School with the grandkids of the colonists, and they didn’t know that there were natives here.”

Wade said that Colony Days is a different platform that can ultimately help them fill in the rest of the overarching narrative that makes up the history of the area, before, during and after colonization.

“We had a separate event before, but that’s not really helping get the story out right? We had hundreds and hundreds of people come to our event and that’s super and we love that. Those are our people. But, you know, it’s about being among people that aren’t always ours,” Wade said. “Our identity grounds us… It’s about us living in this community… It’s about educating. It’s not about being better or special, or any of that, but just having that mutual recognition and that mutual respect.”

June and Charlie Pardue participated in the Alaska Native Marketplace. Charlie said there was a good variety of booths with impressive works on display.

“I’m glad we came,” Charlie said. “We know some of the other artists. It’s good to see ‘em… The Alaska native art community is pretty small… Nowadays, the idea is, ‘share the idea or it dies…’ I share a lot of my woodworking and ivory tips.”

June said it’s crucial for Alaska Native artisans to share their knowledge to the next generation.

“It’s the way we live,” June said. “When you live it you know who you are. We learn as we live.

Traditional knowledge and skills, it affects the health of our families.”

Richard Greeno and several other Antique Power Club of Alaska members participated in the annual Colony Days parade and hosted their annual Tractor Pull event afterwards. He said that he owns two colonial tractors and their club is always on the lookout for old equipment and machinery to keep the past alive.

“We are remembering the colonial days of Palmer,” Greeno said.

The Antique Power Club of Alaska has been a part of the Colony Days parade for over 25 years, according to Greeno. He said that his favorite part of the Parade and surrounding festival is seeing all the different people coming together in the same place enjoying the summer sunshine and sharing smiles across town.

“This is one of the best parades of the whole year. It’s fun to be back. We’re all glad to be back,” Greeno said. “Not having done it last year makes you want to do it more, makes you appreciate it more.”