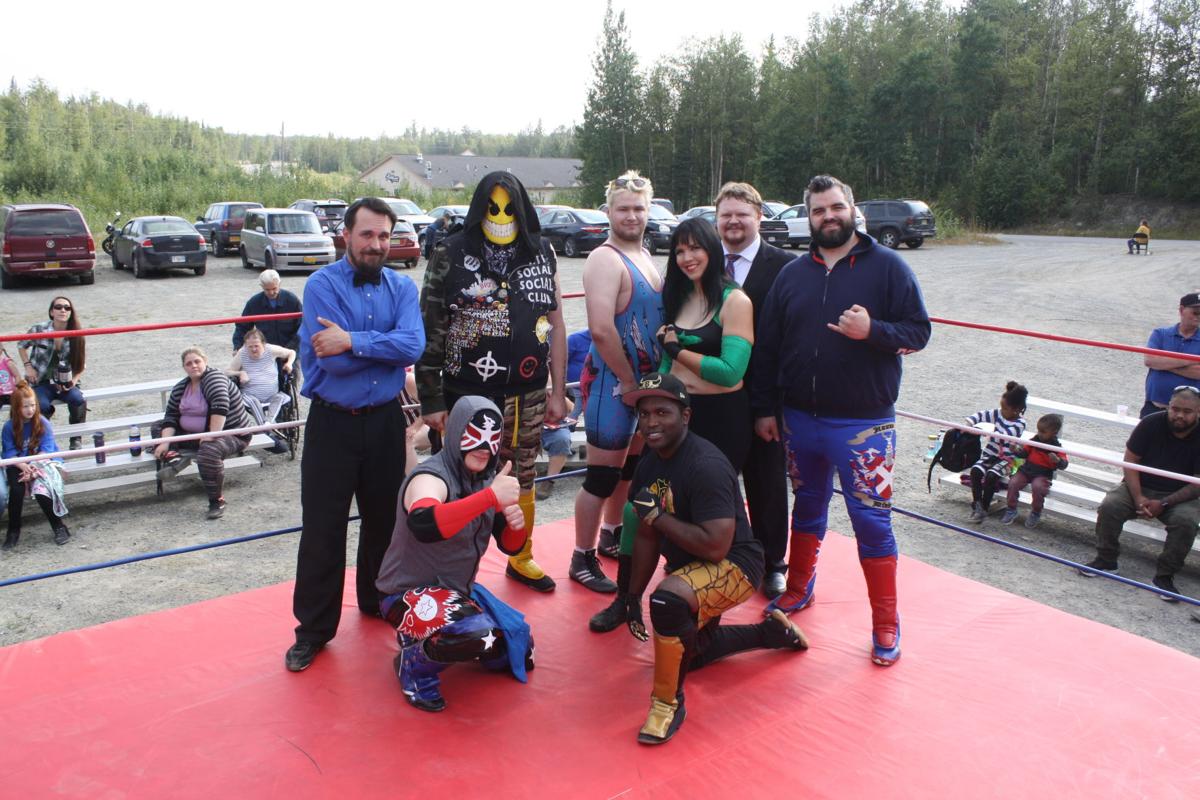 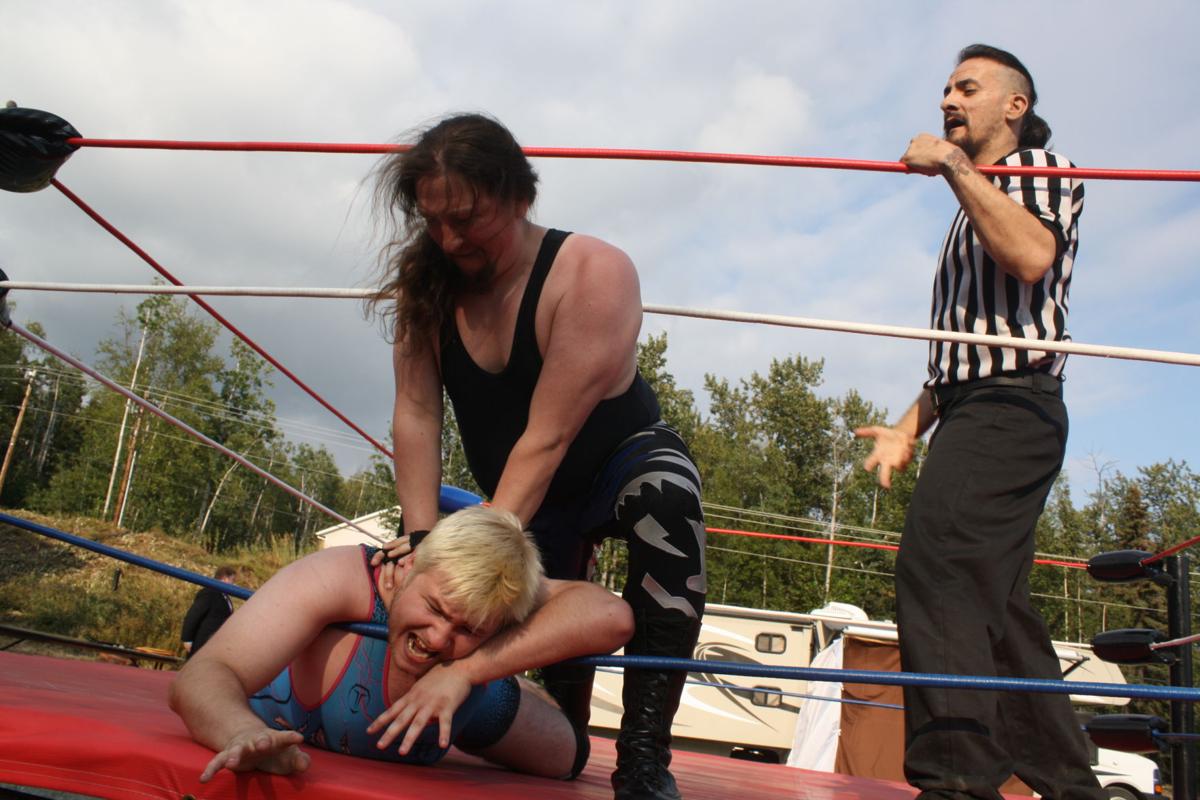 Stephen Wolfe defends his belt against Sterling Folk during a title match at the Patriot Games. 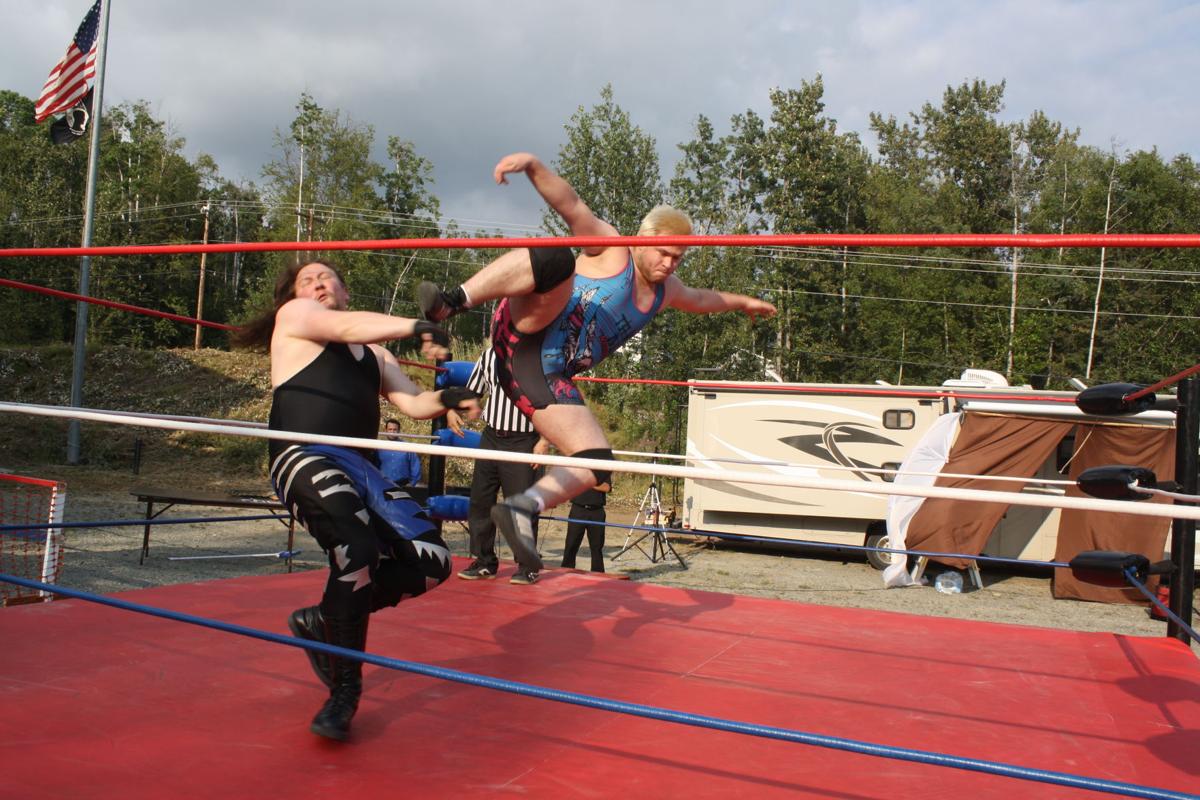 Sterling Folk shows his athletic skills at the 2019 Patriot Games.

Stephen Wolfe defends his belt against Sterling Folk during a title match at the Patriot Games.

Sterling Folk shows his athletic skills at the 2019 Patriot Games.

The colorful cast of wrestlers tussled in front of an enthusiastic crowd of families, fans, and retired military, all to raise money for Mission 22 who in turn is combating veteran suicide.

“They’re patriotic and they want to do what they can for our vets,” Mission 22 Alaska State Ambassador Leader Manuel “Manny” Baez said.

Mission 22 is a national nonprofit ran by volunteers who offer support and resources to veterans as a response to a grim statistic: on average, 22 U.S. military veterans die each day.

“We’re trying to get that number to zero,” Baez said.

Kids and adults alike cheered for the “good guys” and booed the “bad guys,” getting invested in the outcome of the story unfolding in the ring.

This is exactly what Sean Coleman intended when he founded NSA Wresting, getting the whole family invested in this unique style of entertainment. He said it feels good.

“You get those kids behind... they almost look at us like we’re Captain America,” Coleman said.

NSA lead referee Michael Dillon said that in this day in age with superheroes dominating the box offices and the cultural landscape, it’s nice to see local kids watch local heroes battling villains, especially since the money raised supports the heroes of the American armed forces.

“They can see their hometown heroes,” Dillon said.

Patrick McGregor, general manager for NSA Wrestling, has been involved since the inception. He said that about 75 percent of the roster is comprised of his longtime friends.

“Wrestling is what drew us all together in the first place,” McGregor said.

McGregor has known Coleman for many years. He said they were kids that grew up with a love of wrestling. Coleman’s mother even named him after the famous wrestler Shawn Michaels.

McGregor said that love only grew over the years. He quickly aided Coleman on his quest to bring local wrestling to the Valley. McGregor started as a ring announcer, eventually donning the role of GM. He said that he felt sentimental and proud they’ve reached the point of hosting fundraising events like the Patriot Games in the community.

“Humble beginnings that’s turned into something that we can make a difference with,” McGregor said.

McGregor added that they were not only getting the chance to support nonprofits like Mission 22, but with something they’ve all loved and believed in their whole lives. He said that many people want to turn their passions into careers or volunteer work and he felt lucky to be “actually out here doing it.”

“There’s nothing better than that,” McGregor said. “The future of wrestling in Alaska is bright… We’re only getting bigger.”

NSA collaborates with AMVETS Post 9 each year to support a local military/veteran based nonprofit for the Patriot games. They managed to raise over $1,200 for Mission 22 this year, according to Coleman.

“I think everything went really well. Everybody seemed entertained… We’re planning to do it every year,” Coleman said.

Baez said that Mission 22 does a lot of outreach and collaborating with events like this helps to raise awareness for their cause. He said the Patriot Games were their fifth event and it was a great collaboration between NSA and AMVETS.

“I’m glad they reached out. Hopefully we can team up again in the future,” Baez said.

Baez said that he’s active military and felt like this program was an effective way to help his military brothers and sisters. He said that many veterans struggling with issues like PTSD, depression, anxiety, or suicidal feelings often don’t reach out for help.

He has a message for all those veterans who need help but haven’t asked yet: “You’re not alone. There is support and help available; and do not be afraid to ask for help.”

To learn more about NSA Wrestling, search for their page on Facebook.