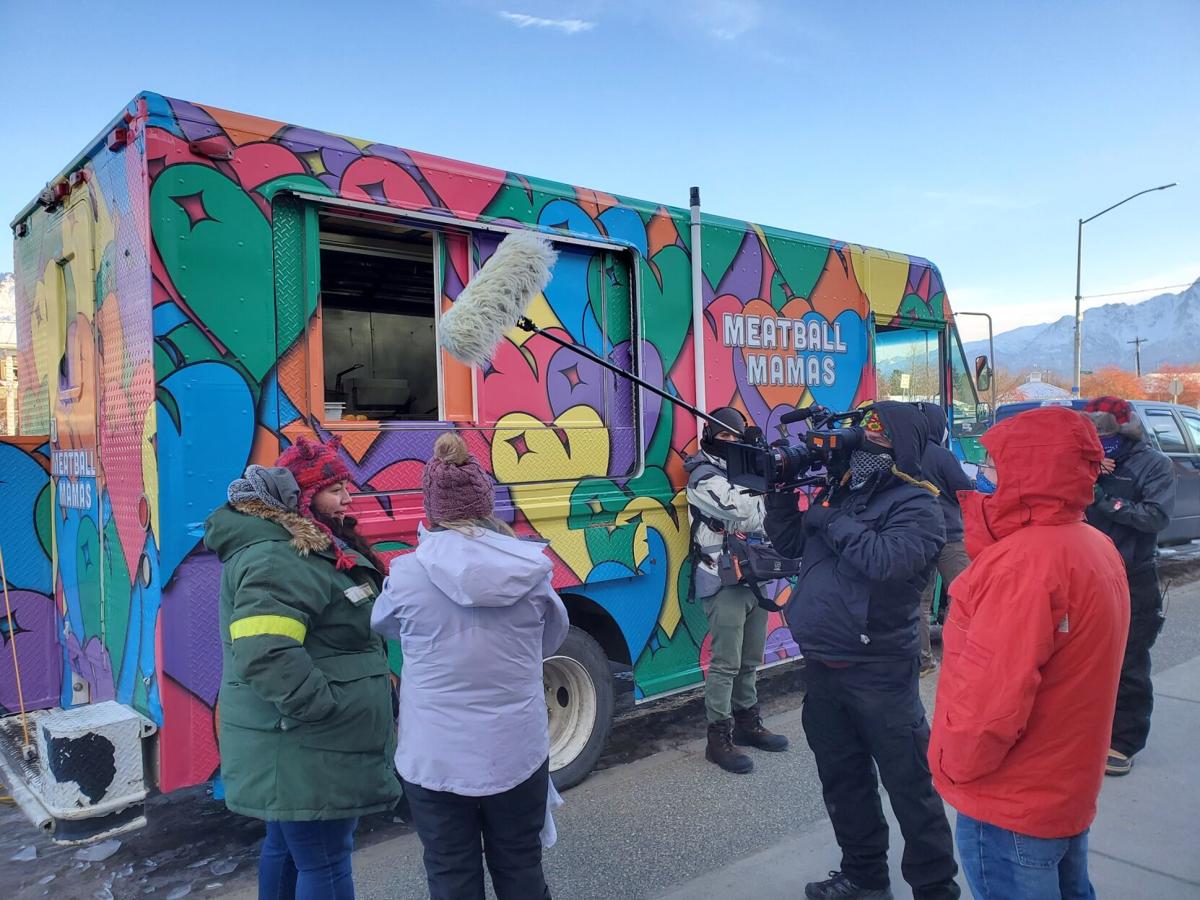 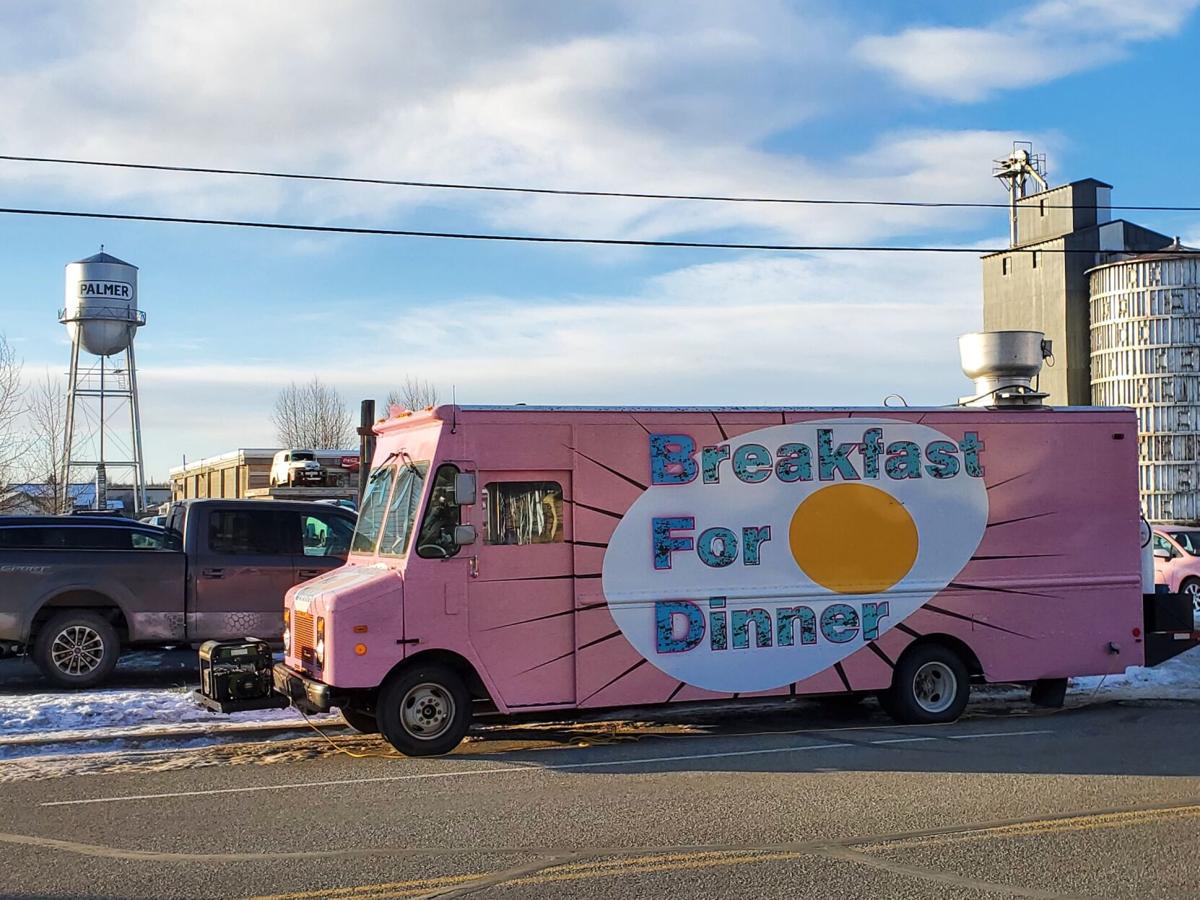 Breakfast for Dinner was one of several visiting food trucks from the Lower 48 parked across Palmer Monday, Nov. 2. 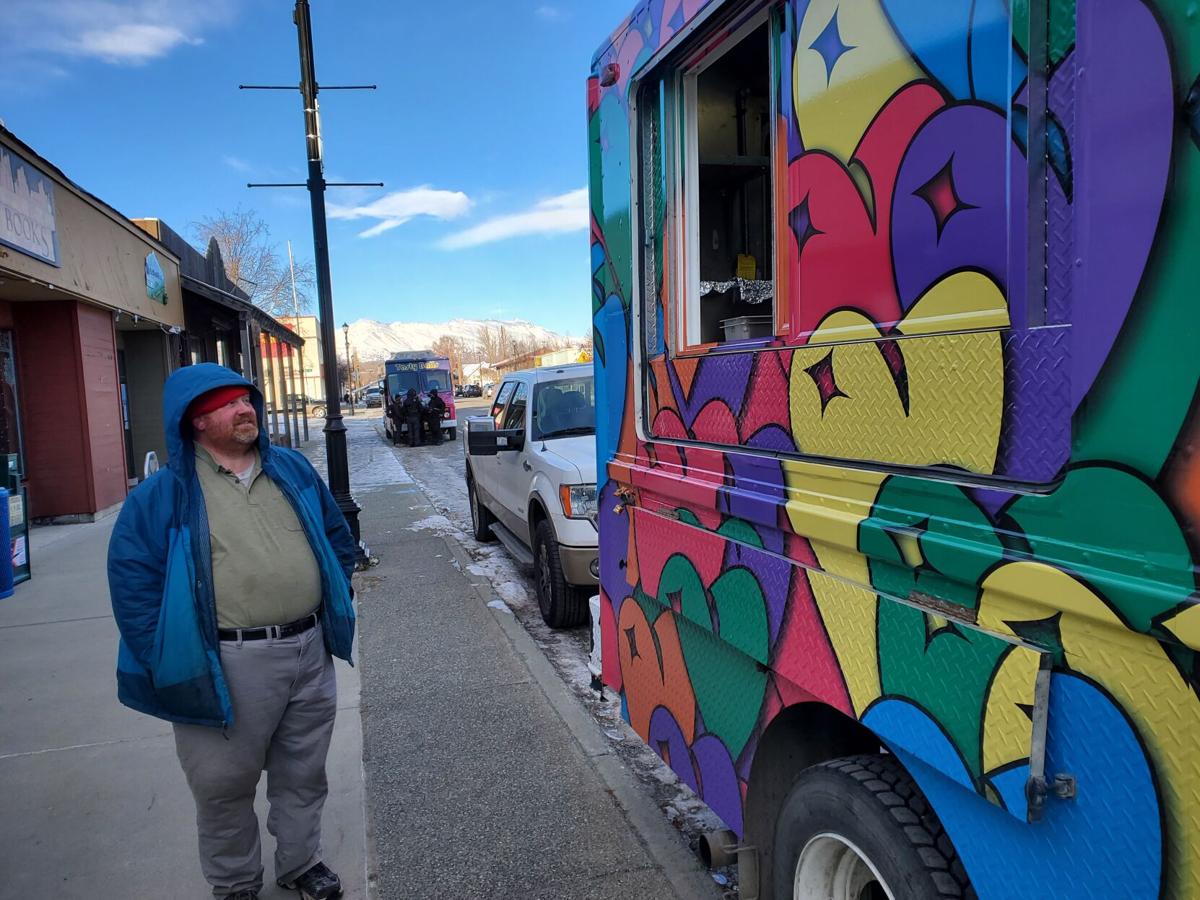 Breakfast for Dinner was one of several visiting food trucks from the Lower 48 parked across Palmer Monday, Nov. 2.

PALMER — Despite the cold winds, downtown Palmer’s shopping district bustled with activity Monday afternoon as locals and visitors alike made their way from one food truck to the other.

The food was actually coming from out of state contestants taking part in the Food Network’s “Great Food Truck Race” television show, making for a noteworthy day out of the norm for the small Alaska town.

“Anything new is fun. It’s cool to see people excited, even though they’re in this wind,” Butte resident Joshua Hardy said.

The Food Network chose to film an upcoming season of the “Great Food Truck Race” in Alaska. Show contestants parked in front of numerous Palmer businesses to serve food while being filmed.

“It was definitely a noteworthy day in Palmer today, gusting winds, sunshine, and lots of rosy cheeks,” Greater Palmer Chamber of Commerce Executive Director Ailis Vann said. “It was fun to talk to business owners around town and hear their thoughts on the event… and to see people out and about enjoying the excitement.”

“The Great Food Truck Race” is a reality television cooking competition that follows food truck teams throughout a variety of cooking competitions and challenges. Teams with the least amount of profit following the challenges are eliminated, and the overall winners earn a $50,000 grand prize. The trucks were in Wasilla over the weekend and Anchorage last week. The show has aired on Food Network since 2010. Acclaimed chef and television personality Tyler Florence is the host. A producer with the show said they could not comment about the upcoming season that will include the footage from Palmer.

Meatball Mamas, Querencia Mia, Metro Chilli, Some Like It Tots and Breakfast for Dinner were among the trucks parked in Palmer Monday.

Non Essentials was one of the participating businesses who allowed the visiting food trucks to park outside their establishments. Several community members posted a list with the food truck names and accompanying locations around town on social media.

Owner Denise Nelson said that she thought it was a neat opportunity, something she’d never done at the store before.

“It was just an unusual lunch and dinner option for a not typical Monday. Kind of makes up for the wind,” Nelson said.

Nelson said that film crews cycled through her doors and other businesses to warm up. Most of the crew members were wearing thick parkas.

“It’s fun. my heart is bleeding for these guys who aren’t used to the winter weather, “ Nelson said with a laugh. “The show is cool. I’ve seen it before… We’ve got space for warming up so that works out.”

Thanks to numerous posts shared across social media and Valley word of mouth, crowds of people flocked to Palmer, including Hardy who said he’s always looking for a new food truck to try out.

“I like to see what’s out there. Just break it up,” Hardy said. “My wife, she loves the food truck shows. She’s a big fan… It’s fun to see them doing something like this around here.”

Elizabeth Bradley came from Wasilla to check out all the excitement. She said that her husband kept texting her from work asking her to save him some food. She said this beats the drive thru anyway.

“It would be cool to show some local food trucks. because we really have some really good ones out here,” Bradley said.

Lacey Eshleman was one of several locals interviewed in front of a camera by Food Network crews to gather footage for the show. After talking to crew members, she waited on the sidewalk for her order. She said that a friend of hers let her know about this and she figured it would be a fun part of her son’s second birthday celebration.

Eshleman said that she was born and raised in the Valley. Despite being unfamiliar with the show, she said this was an interesting experience out of the usual norm, noting that most food truck activity slows down in Alaska during the winter months.

“I don’t actually know about it because I don’t watch TV, but I love food trucks,” Eshleman said. “I’m amazed how many people showed up. I guess it’s a pretty popular show.”