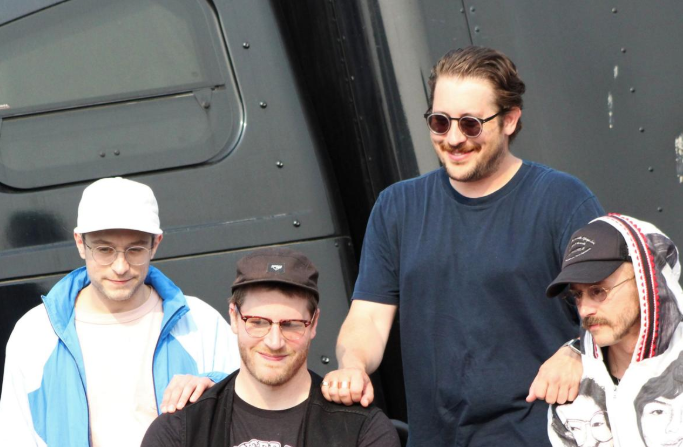 Portugal. The Man played a free concert in the UAA Parking lot in 2019. 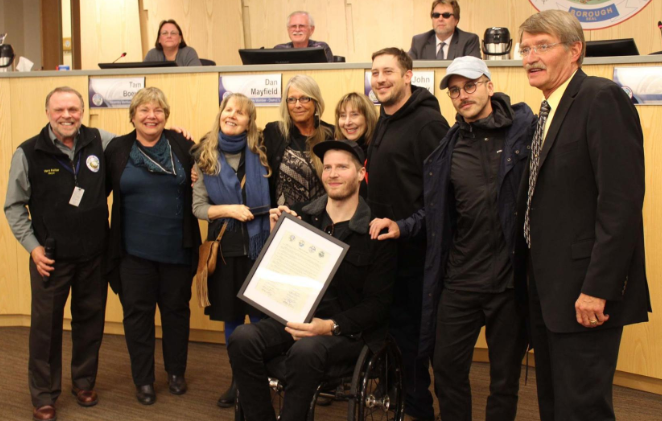 Portugal. The Man band members posed with their mothers, Mat-Su Borough Assembly Mayor Vern Halter, former Assemblywoman Barb Doty and Wasilla Mayor Bert Cottle after receiving their citation from the Assembly for winning a Grammy in 2018.

Portugal. The Man played a free concert in the UAA Parking lot in 2019.

Portugal. The Man band members posed with their mothers, Mat-Su Borough Assembly Mayor Vern Halter, former Assemblywoman Barb Doty and Wasilla Mayor Bert Cottle after receiving their citation from the Assembly for winning a Grammy in 2018.

PALMER — When the Mat-Su Borough School Board voted 5-2 to pass an amendment preventing the use of “I Know Why the Caged Bird Sings” by Maya Angelou, “Catch-22” by Joseph Heller, “The Things They Carried” by Tim O’Brien, “Invisible Man” by Ralph Ellison and “The Great Gatsby” by F. Scott Fitzgerald in MSBSD high schools, a trio of musicians with Mat-Su roots took notice.

Valley-grown Grammy winning recording artists Portugal. The Man jumped in to offer their assistance for students who desire to read these books and began a barrage of social media posts criticizing the school board’s decision.

“We want to make sure that any student in the Matanuska-Susitna Valley and any parent of any student in the Matanuska-Susitna Valley has access to any of these books if they want and we’re willing to send one or all five to anyone that writes us and asks,” said guitarist Eric Howk. “For us it’s just kind of what our foundation sort of strives to do. That’s why we set this up and it’s for any time that we see anything that we strongly disagree with or anything that needs a stronger voice. We have a microphone. We were given a microphone because we have some songs that were on the radio and what happens to the Valley happens to us. I’m not exaggerating and I’m using no hyperbole when I say that when I first read about this, I felt it in my heart and it hurt.”

This is not the first time the Portugal band members have jumped behind social causes related to their home state, including education funding and Alaska native rights. Howk said that members of the band learned about the school board’s decision in a group chat and have been acting in opposition to that amendment to MSBSD high school English elective curriculum over the last two days. Portugal’s Twitter account pinned their tweet from April 28, leaving it at the top of their feed for every one of their over 126,000 followers to see.

“We believe this decision is narrow-minded and un-patriotic, and we are not OK with it,” read a portion of the tweet.

Portugal’s social media accounts have continued to promote the substance found in each of the five books that were removed from MSBSD classrooms last Wednesday, sending out quotes from iconic authors, thanking teachers, tagging the MSBSD’s twitter account and retweeting Colony High School senior Mekenna Bills’ open letter to the Mat-Su School Board.

“I’ve been very active in the social media and I get the counter argument that it’s not a ban on the books, the books are still in the library, it’s a ban on them being part of the curriculum. I would argue that that is absolutely as dangerous because I think that classroom conversation is so important. I think it’s so important to compare your ideas, to fight about your ideas, I think that critical thought is something that can only happen in groups,” said Howk.

Portugal began playing music together at Wasilla High School under the name ‘Anatomy of a Ghost,’ in the early 2000s. Singer John Gourley hails from Willow, Howk and bassist Zach Carothers were raised in Wasilla. After relocating to Portland, Oregon, Portugal’s 2017 album “WOODSTOCK” featuring the single “Feel It, Still” went RIAA Platinum five times and broke the record for the most weeks at the top of the alternative top 40 chart at 20 weeks. Portugal won a Grammy for “Feel It, Still” in 2018 and returned home not for praise and adoration from a state full of fans, but to connect with native Alaskan artists and continue their commitment to social justice. Portugal has partnered with Keep Oregon Well to raise awareness for Mental Health, March for Our Lives to promote gun reform and the climate action initiative Protect Our Winters. On the Alaskan portion of their 2018 world tour, Portugal played two benefit concerts in Anchorage to raise money for suicide awareness. During their 2019 concert in the parking lot of the Alaska Airlines Center on the UAA campus protesting Gov. Mike Dunleavy’s budget vetoes, Gourley wore a kuspuk with the faces of missing and murdered indigenous women, and band members often wear clothing made by Native Alaskan artists, paying homage to their home and supporting causes that affect Alaskans.

“We just kind of get to go around and experience stories and people and people’s experiences and translate those experiences into our story and then we carry it onto the next place, but it always comes back to home for us because that’s where so many of our stories began and where they continue and all of us still have family there,” said Howk. “It hurts me for all of the incredible teachers that I had growing up that worked so hard to get people like me to see so much more than, you know their backyards. It’s just, it’s devastating and that’s what always brings us back to Alaska and to Alaskan causes is I think Alaskans just take care of each other.”

Howk shared how a friend of his from Anchorage who works as an artist came across the school board news and said they were not surprised to hear it came from the Mat-Su. Howk said that Portugal’s loyalty to their home state is what compels them to speak out against the school board amendment, mentioning that no matter how far up the Parks or Glenn Highway, Alaskans will stop to help their neighbor fix a flat tire in the middle of nowhere.

“Even though we don’t live there now, and as hokey of a cliche as that may be, it’s still part of who we are. It’s in our blueprint,” said Howk. “Once you start messing with the classics and taking away five incredible pieces of classic literature that is, you know, essentially so important that I’m on a microphone talking to you about it right now because it’s under threat. That’s how important these books are. You take those away and you’re taking away incredible tools from teachers that are just working so hard with what they have.”

Howk sees striking similarities between creative uses of literature and what he describes as an ethereal experience in making music with his Portugal bandmates. Howk recalls Ms. Baker’s classroom at Wasilla High and her unique atmosphere for molding young minds. While taking Advanced Placement Literature from Ms. Lawton at Wasilla High, who also taught French, Howk was called out by his teacher for turning in a book report when she could tell he had not finished reading “Jane Eyre” by Charlotte Brontë.

“I felt like that was her way of being like I care and you’re not going to sneak that past me and words matter and like the context of words matter,” said Howk. “She just knew that I didn’t get the story. I read some of the words but I didn’t get the story and I think that that’s so much of the problem with arbitrarily labeling or branding different narratives or different stories in books as inappropriate or salacious or problematic, there’s no conversation behind that, and that was another thing that was incredible in that class. It was incredibly argumentative and the subject matter wasn’t super easy or handed to us, but it resulted in no wrong answers. It was a lot of cross talk, a lot of passion, a lot of people standing up at their desks and that’s incredible. That’s how it should be. That’s how we make our records. No one’s like cool bassline bro, next. It’s like hey great guitar part, next song, and it’s always an argument and it should be. That’s what makes things unordinary.”

Howk and his Portugal band mates want to help students expand their minds by providing the opportunity to read the five books removed by the school board on April 22. Recently Howk was disappointed by the film adaptation of the “His Dark Materials’” book trilogy by Philip Pullman, and is currently rereading Pullman’s “The Amber Spyglass” to immerse himself in the printed story. Howk’s favorite book is “Kafka on the Shore” by Haruka Murakami, and said he is always compelled and sometimes terrified at the universes in Murakami’s literature

“It is Japanese hyper surrealism that jumps from scene to scene flawlessly and he’s one of the greatest descriptive authors of all time. He works in all of the senses, relentlessly at times and just when you think you know where he’s going with something, you go to a completely different setting and then he gets you just as invested in that setting as he does the next. The takeaway from all of it is maybe one of psychedelia but it’s also one of beauty,” said Howk.

Howk said that critical thinking happens naturally in discussion groups and wants to support teachers’ ability to foster that discussion with students. Howk has a cousin starting high school next year in Alaska and Carothers’ mother still calls downtown Wasilla her home. When Howk was growing up in Wasilla, both of his parents spent time working at the Frontiersman offices, and Howk developed a connection with the events of his local community that has not waivered.

“I used to raise hell in the newsroom as a kid in the late 80’s running around that place. I was there kind of like reading the AP printer at the same time that you know the world was getting news about Kosovo and about the Berlin Wall and just these incredible moments in history but at the same time, I was there when Martin Buser hit 10 days on the Iditarod and blew everyone’s mind. So to me, Wasilla news is Wasilla plus world news. You have to focus on what’s local but you have to be so aware of what’s national too,” said Howk. “I think that everything that’s happening with this, let’s call it a curriculum ban. Everything that’s happening with this could potentially happen anywhere and it’s a great example in how not to do it and it’s a great example to show that even when you don’t think that people are watching and even if it’s a smaller community, people are definitely watching.”

Students who wish to receive a free copy of any of the five removed books can email sticksandstones@portugaltheman.com.