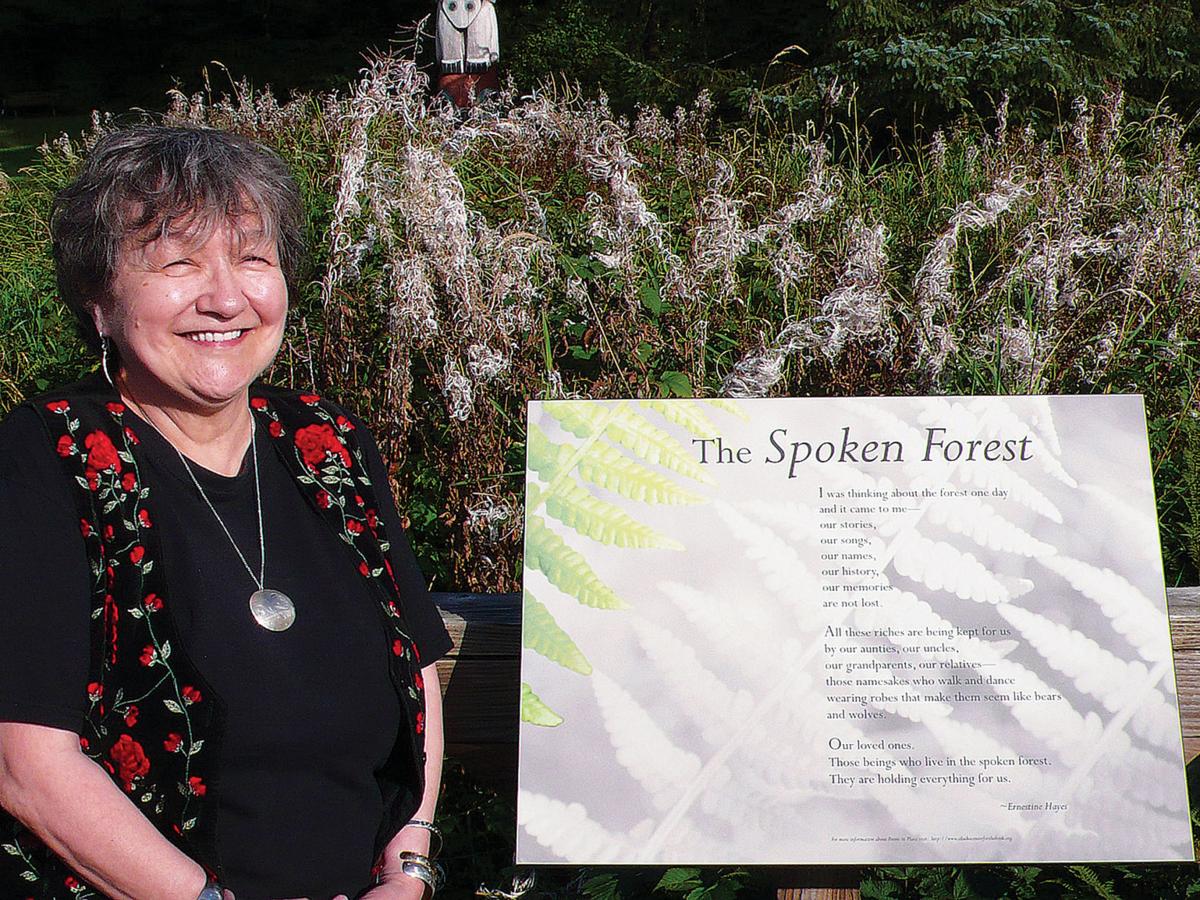 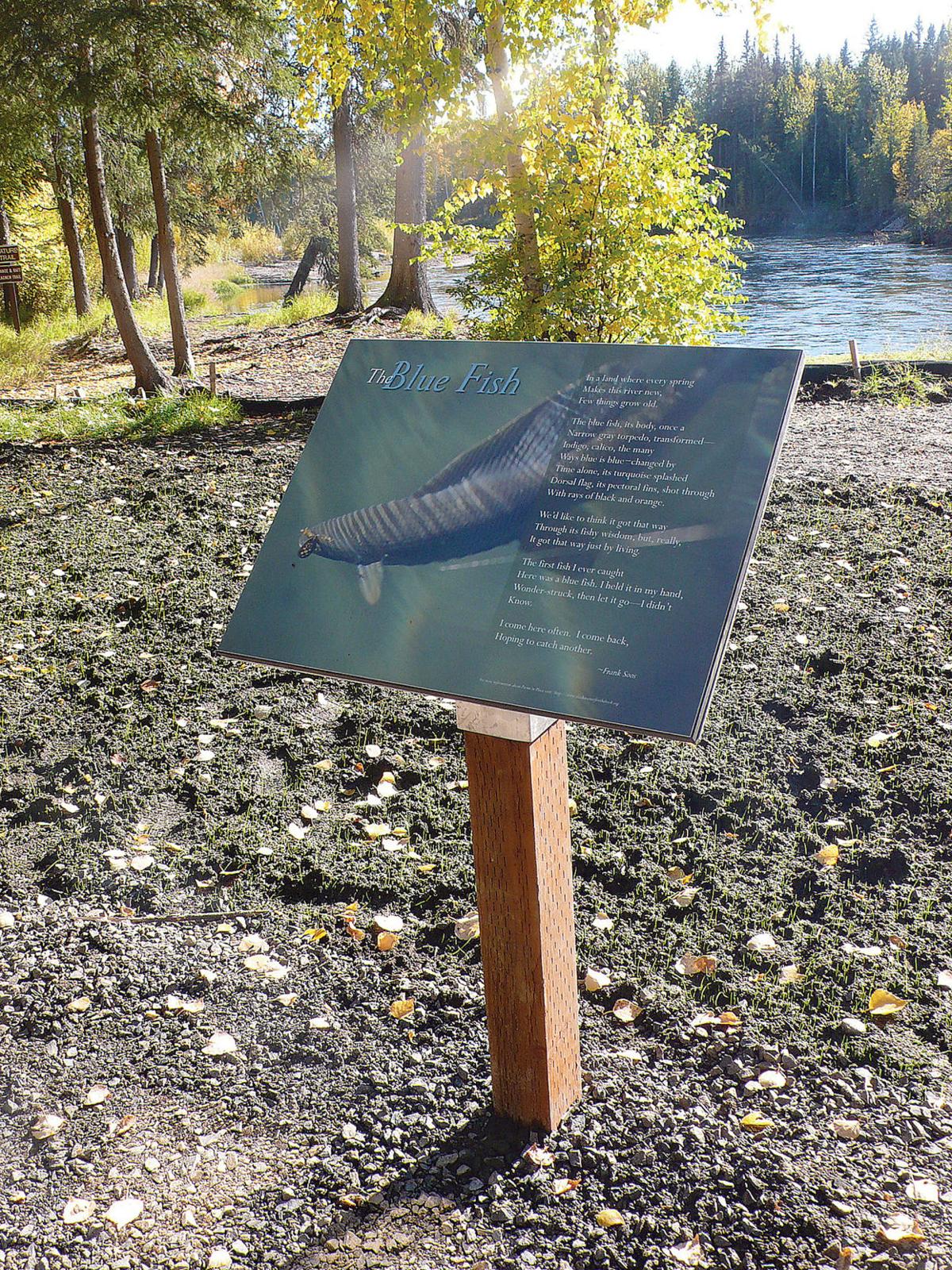 Frank Soos’ poem "The Blue Fish" was permanently placed in Chena River State Recreation Area last year, along with John Haines’ "Poem of the Forgotten" as part of the three-year Poems in Place project. 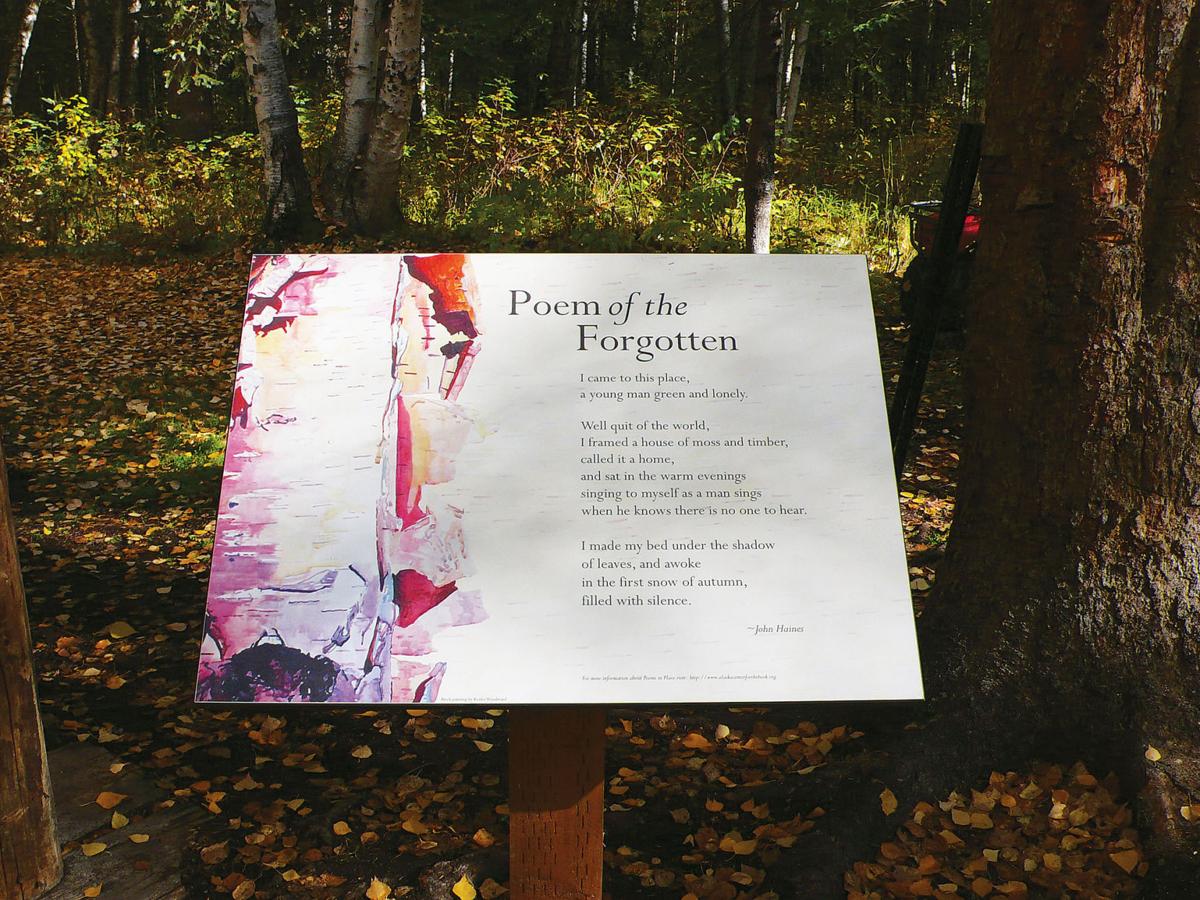 John Haines' "Poem of the Forgotten" was nominated last year to be permanently installed in the Chena River State Recreation Area as part of Poems in Place, a project sponsored by Alaska Center for the Book. Kes Woodward did the artwork for the plaque.

Frank Soos’ poem "The Blue Fish" was permanently placed in Chena River State Recreation Area last year, along with John Haines’ "Poem of the Forgotten" as part of the three-year Poems in Place project.

John Haines' "Poem of the Forgotten" was nominated last year to be permanently installed in the Chena River State Recreation Area as part of Poems in Place, a project sponsored by Alaska Center for the Book. Kes Woodward did the artwork for the plaque.

HATCHER PASS — Alaskans have the opportunity to get in touch with their inner bard, and selected poets and their poems will be celebrated in the Mat-Su Valley soon.

“Poems in Place encourages Alaskans to explore a relationship with language and place, both as writers and readers,” project coordinator Wendy Erd wrote in a 49 Writers blog post earlier this year.

At Independence Mine State Historical Park on Aug. 30, poets and poetry enthusiasts are encouraged to attend a lecture and discussion with former Alaska poet laureate Tom Sexton from 11 a.m. to 1 p.m. and the dedication ceremony following at 2 p.m. The workshop is free and open to anyone age 18 or older but space is limited so participants must register in advance by emailing poemsinplace@gmail.com.

According to Erd, the project started here in 2011 with the placement of Alaskan poet Kim Cornwall’s poem, “What Whales and Infants Know,” at Beluga Point in Chugach State Park. The project was inspired by the 1994 “publication” of William Stafford’s Methow River poems on roadside plaques in the northern Washington valley.

Erd and Cornwall had planned to go on a “poetry pilgrimage” someday, but after Cornwall passed away in 2010, Erd still wanted to do something. Once she discovered the Beluga Point epigram on Cornwall’s poem, and with the Methow project in mind, Erd posed the idea to the Alaska Center for the Book, and everyone quickly came on board.

“It must have been the right idea because everyone just embraced it,” Erd said. “Lots of friends and other supporters donated funds for the project and it just took off. It’s been a really wonderful thing.”

Wall, a professor of Creative Writing at the University of Alaska Southeast and faculty advisor to the student editors of the school publication “Tidal Echoes” published her first poem in 1994. She has published two books of poetry since then and said she was very excited to have her poem selected for Poems in Place.

“I actually think this is the coolest project I’ve ever been involved with,” she said. “This project means more to me than those two books.”

Wall’s poem, “This Poem, This Beach, You” took her four months to compose, she said, but poetry doesn’t have to be like that for everyone.

“We want to work on bringing poetry out of the academic world and into everybody’s world,” she said.

Sexton, the featured poet for the Aug. 30 event, also has an academic background in poetry, but emphasized experience and “intense” attention to detail as the most important requirements for “place poetry.” In his poem, “Independence Mine, August,” Sexton said he tried to imagine and capture what it would be like to suddenly emerge from an underground tunnel after hours of dark and dirty hard work into such a place as Hatcher Pass.

Note: it’s not just Hatcher Pass, nor the mine — it’s the sensation of the moment.

“It isn’t about a specific place, it’s the feelings we have about a place, about the north,” Sexton said.

“In a good place poem, the feelings come at the end and are muted so the place itself is what affects the reader,” he said.

Sexton’s first impression of the Alaska north came in 1959 when the U.S. Army stationed him at the Fort Richardson (now known as JBER). He was just six months out of high school, so when his time was up he traveled back East to get his Bachelor of Arts degree in English at Salem State College, then returned to the University of Alaska Fairbanks for his Master’s of Fine Arts with his wife and a 1962 Volkswagen bus.

Soon after he finished school, Sexton became the first English professor at the University of Alaska Anchorage campus and stayed there for 24 years. He became Alaska’s Poet Laureate in 1995 and has been retired from teaching for more than 20 years.

Mrs. Sexton is not a writer, her husband said, but she is a “good sounding board and a good critic.”

“Everything I write I read to her and watch her expression,” he said. “Then I know I better go back and write it over again.”

The collaborative work of writing poetry, Sexton said, is a huge part of the process, but not one that necessarily comes naturally to him.

Having contact with other writers, however, hasn’t really been difficult for Sexton, as he’s had some very important resources always at his fingertips: books.

Sexton cited Elizabeth Bishop as his favorite poet — her poem “Filling Station” was particularly inspiring to him — and Seamus Heaney as a close second. Ezra Pound, Sylvia Plath and Robert Service also made the list, and Gerard Manley Hopkins’ poem “Inversnaid,” about a waterfall in Scotland, also stuck out to Sexton as a good place poem.

“If I don’t know where to go (with my writing), I’ll go read their work,” Sexton said. “I don’t go to them looking for something I can copy, but to say ‘ah, yes, this is poetry, this is the way I should be doing it.’ You can learn an awful lot, not from writers themselves, but from their work.”

Tim Troll’s poem, “The Wisdom of the Old Ones,” will be installed Sept. 6 at Lake Aleknagik State Recreational Site at the entrance to Wood-Tikchik State Park near Dillingham.