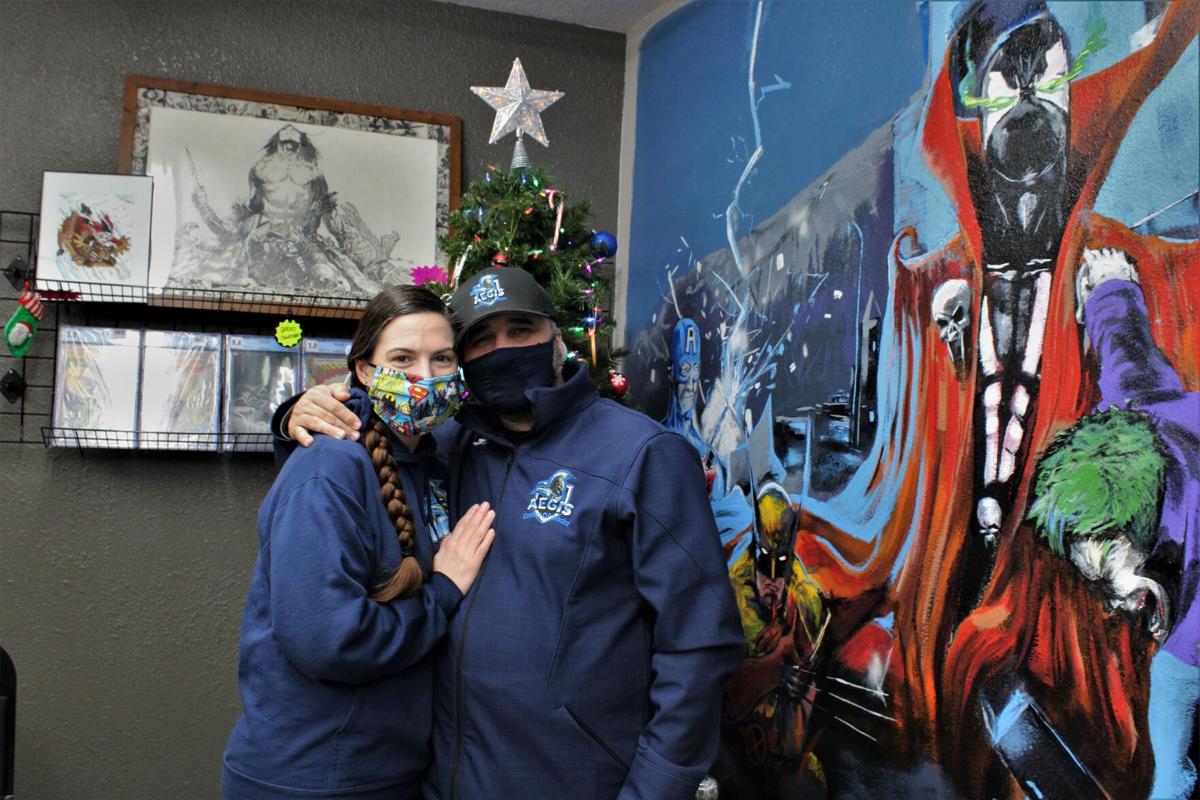 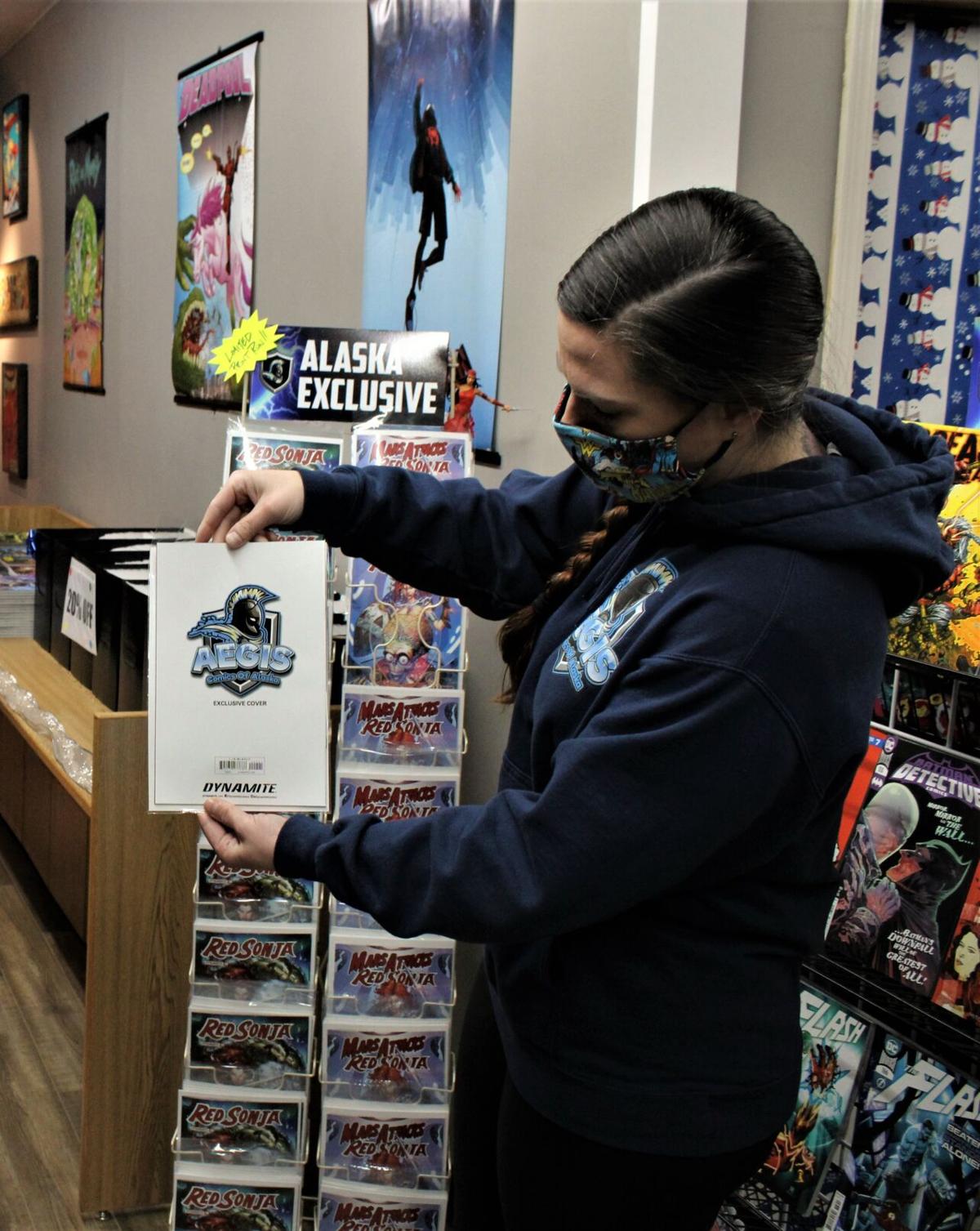 Amie shows an exclusive cover of 'Red Sonja' made specifically for their shop, also featuring their logo on the back of the comic. 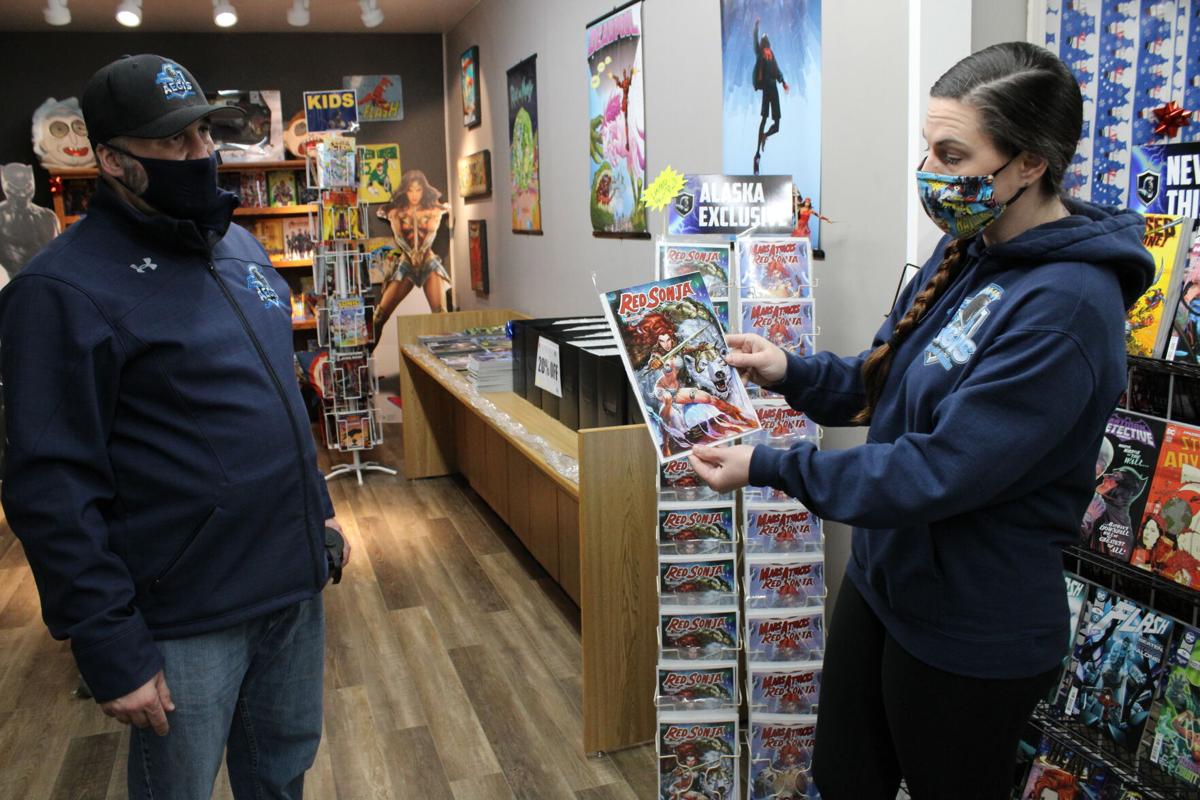 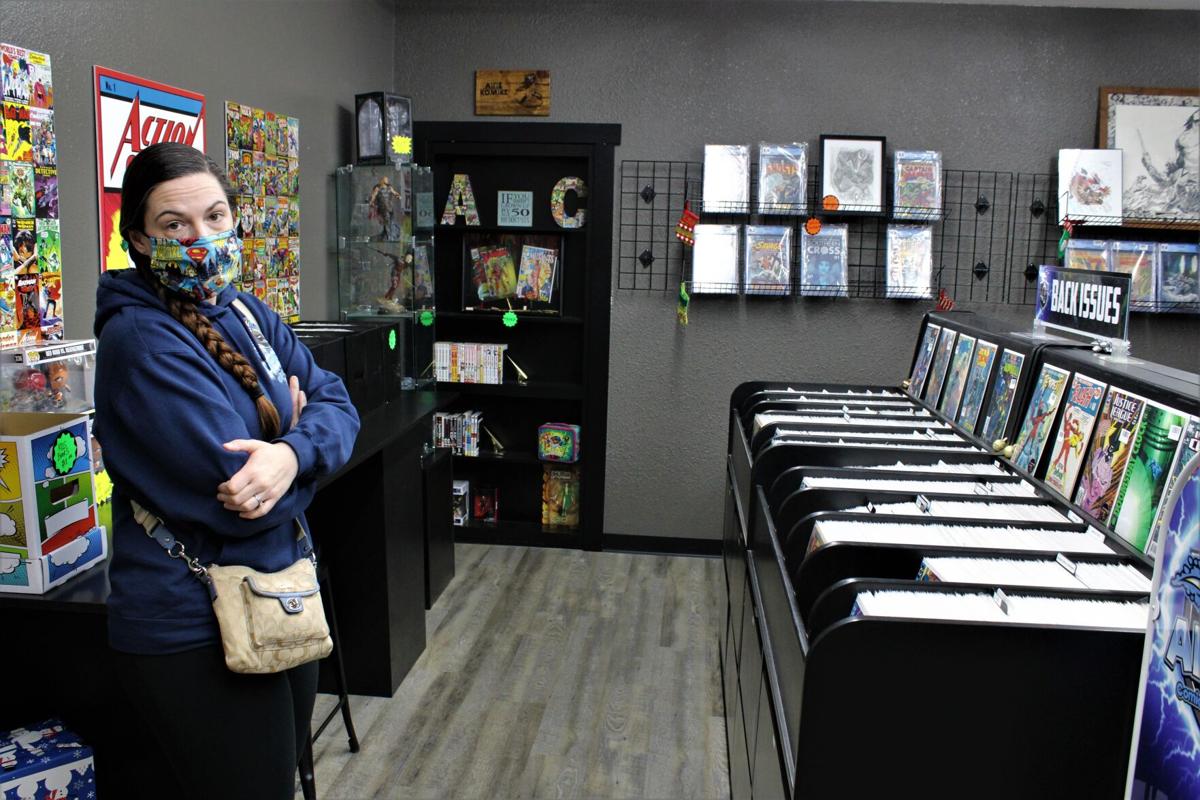 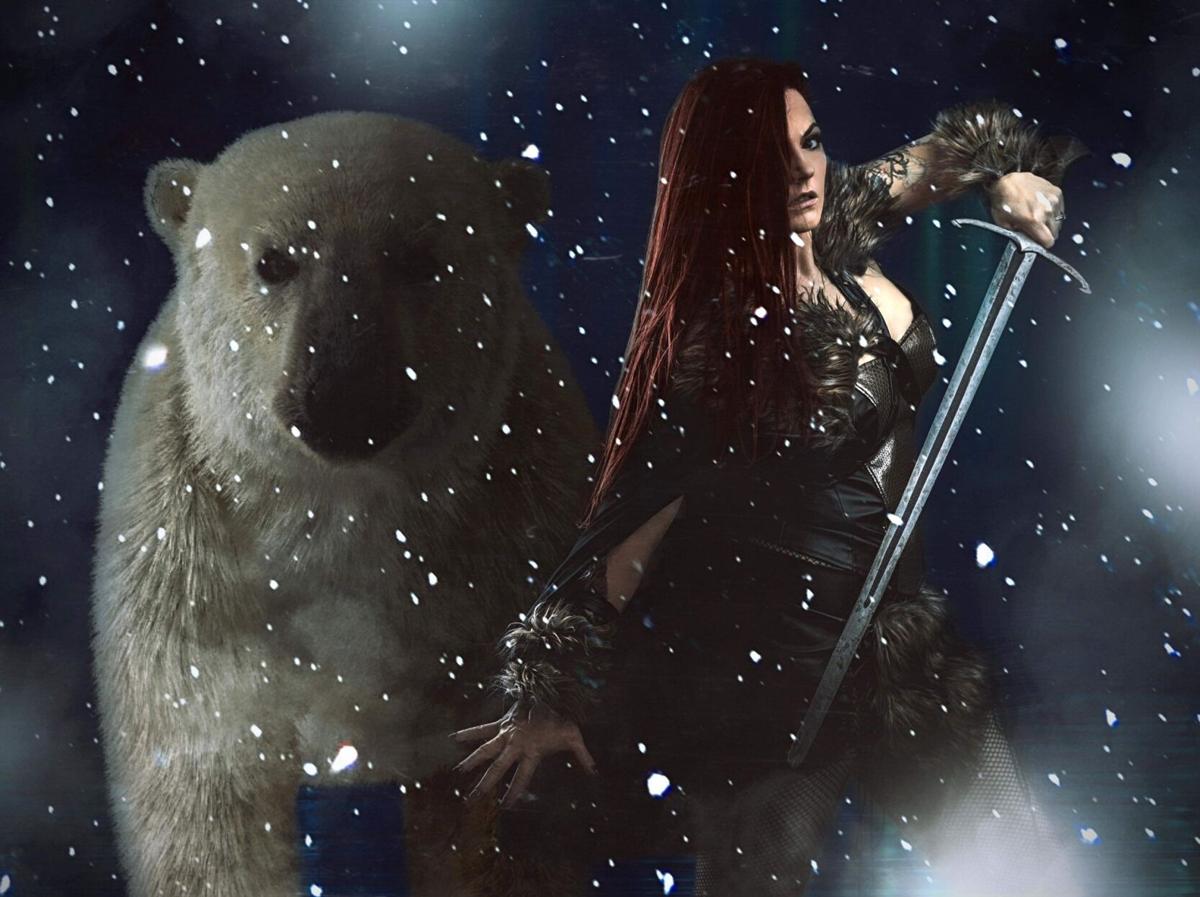 Amie Nieves got into character in light of their collaboration with Dynamite Entertainment and cosplayed as Red Sonja for a photo shoot.

Amie shows an exclusive cover of 'Red Sonja' made specifically for their shop, also featuring their logo on the back of the comic.

Amie Nieves got into character in light of their collaboration with Dynamite Entertainment and cosplayed as Red Sonja for a photo shoot.

WASILLA— Aegis Comics of Alaska is currently raising funds to expand and relocate its establishment to the bottom floor of the Larson Building in downtown Wasilla.

Owners Luis and Amie Jo Nieves created a Gofundme page to raise $15,000 for the move downstairs. They’ve raised $960 from six donors since the page was created on Nov. 10.

“Slowly but surely, we’ll get to our goal. There’s no doubt,” Luis said.

According to Amie, a huge motivator for getting the move done as soon as possible is the need to provide more adequate access for those who are physically disabled and unable to make their way up the winding stairs to the shop.

She referenced Austin’s Compassion Exchange founder and sole operator Tina Ervin’s experience at the shop. Ervin’s son Austin is a huge comic book fan but he is unable to physically go inside the shop due to his wheelchair. Amie said that Ervin uses FaceTime to show her son around the shop to help him pick out the comics he wants.

“I just want to be able to have it so kids like Austin can come in,” Amie said.

Luis said they started out of this location because it was affordable and they didn’t anticipate growing to this point. He said the comic shop had been thriving and gaining popularity at a much quicker rate than previously expected.

“We had no idea we’d see the need like this,” Luis said.

Aegis Comics opened during the summer of 2019. Luis and Amie have been the sole employees until recently. They hired a part-time employee and shop manager to help them with the shop.

Up until the pandemic, the shop was regularly hosting a number of events, promotions, and other activities. Amie said they’ve had to cancel a lot of their social gatherings to maintain social distance.

“The pandemic kinda put a damper on a few things this year,” Amie said. “We’re doing the best we can with what we’ve got.”

Luis noted that despite the strains from the pandemic, the shop is making it through and they’re all hopeful for the future.

“We’re hanging in. We’re fighting through it,” Luis said. “Our customers have been helping us through this… Thanks to everyone, we were able to hire two people and keep things going.”

Kevin Doggett is the newly hired shop manager. He said this is his ideal workplace, the kind of job he’s always wanted.

“I love it, man. I’ve been collecting comic books since I was like 5, 6 years old,” Doggett said. “When Lu offered me the job, it was a dream come true.”

Doggett has lived in the Valley for the last 10 years. He said there hasn’t been anything like this out here and he immediately flocked here once it opened.

“My buddies and I were starving for a comic shop,” Doggett said with a laugh.

He said that being involved with the store has shown him how much of an impact it’s having on the community.

“I would love to see it grow... and become a staple, a name that everyone knows, something that they’re used to having around here,” Doggett said.

After the move and remodel, Luis and Amie plan to keep expanding with community inclusion endeavors like an after school reading program and bringing back their coffee with veterans meetings.

“There’s so many valuable lessons you get from comic books,” Amie said.

Luis said the traditional role of a comic shop has always been to be a social space, a community hub for comic book lovers of all ages to safely page through their favorite comics and talk to like-minded fans of the artform.

“We’ve made a lot of good friends here... this is community,” Luis said.

Aegis has worked with nearly a dozen local artists since they opened, showcasing their works and collaborating on shop projects. Luis said they mostly work with U.S. military veterans, and they encourage any creative sketchers, painters, crafters, carvers or other artistically inclined locals to reach out.

“It’s brought a lot of people together,” Luis said. “Everything’s a story here.”

Aegis recently achieved a historic milestone and recognition from the comic book community. Amie and Luis worked with Dynamite Entertainment to feature two exclusive covers of “Red Sonja” specifically made for their shop, one of few in the nation and the only in Alaska. Amie was even able to provide input and help come up with the designs.

“It was a really cool experience,” Amie said.

Aegis Comics of Alaska is one of three comic book shops in the state. Luis said they’re very active on social media and continue to expand their scope and social connections through their podcast and Youtube channel.

Aegis offers curbside and shipping options with new issues coming to the shop every Wednesday.

Santa Claus is scheduled to appear outside the shop for socially distant photos this Saturday from 11 a.m. to 3 p.m.

The shop is located at 500 E. Swanson Ave., Suite 10 in downtown Wasilla, near Turn A Leaf and Carrs Safeway.