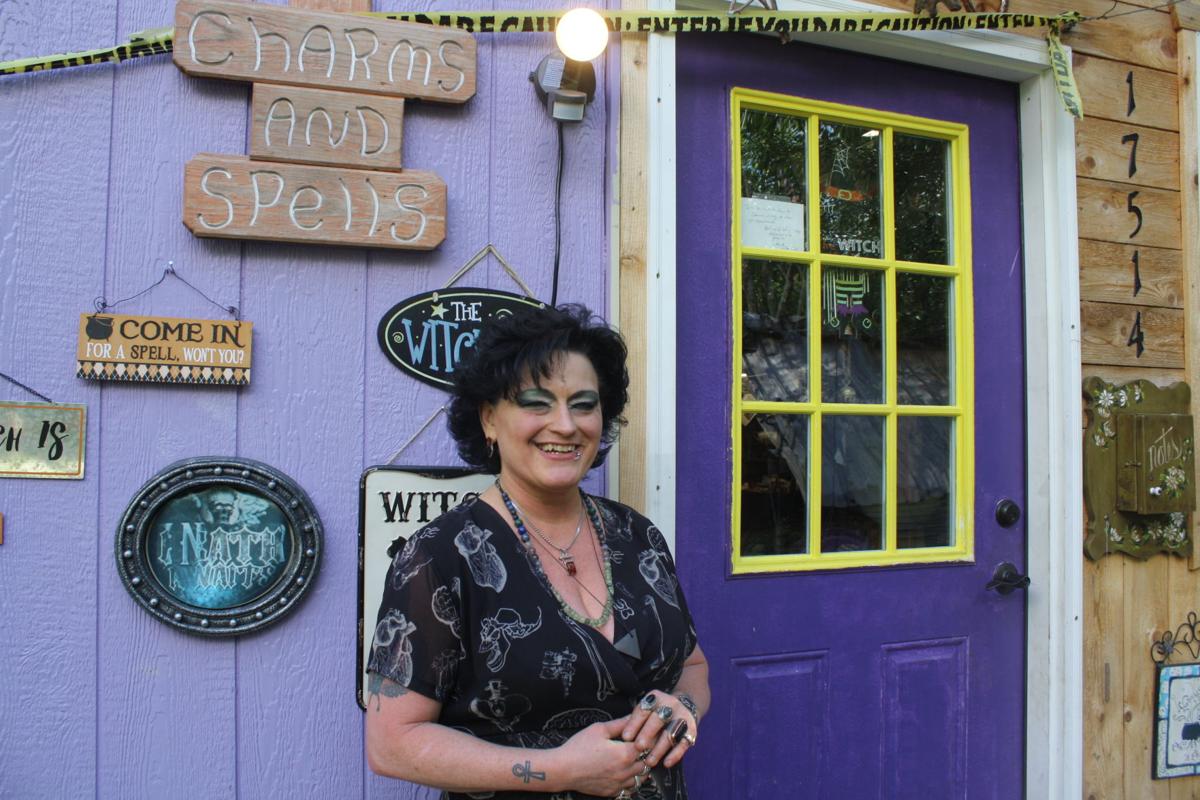 Rhonda Garnett, a.k.a. Willow Wytch, stands in front of her establishment, Wytchwood Herbal Shoppe. The shop is coveted by many and there’s currently a fundraiser to help keep it going. 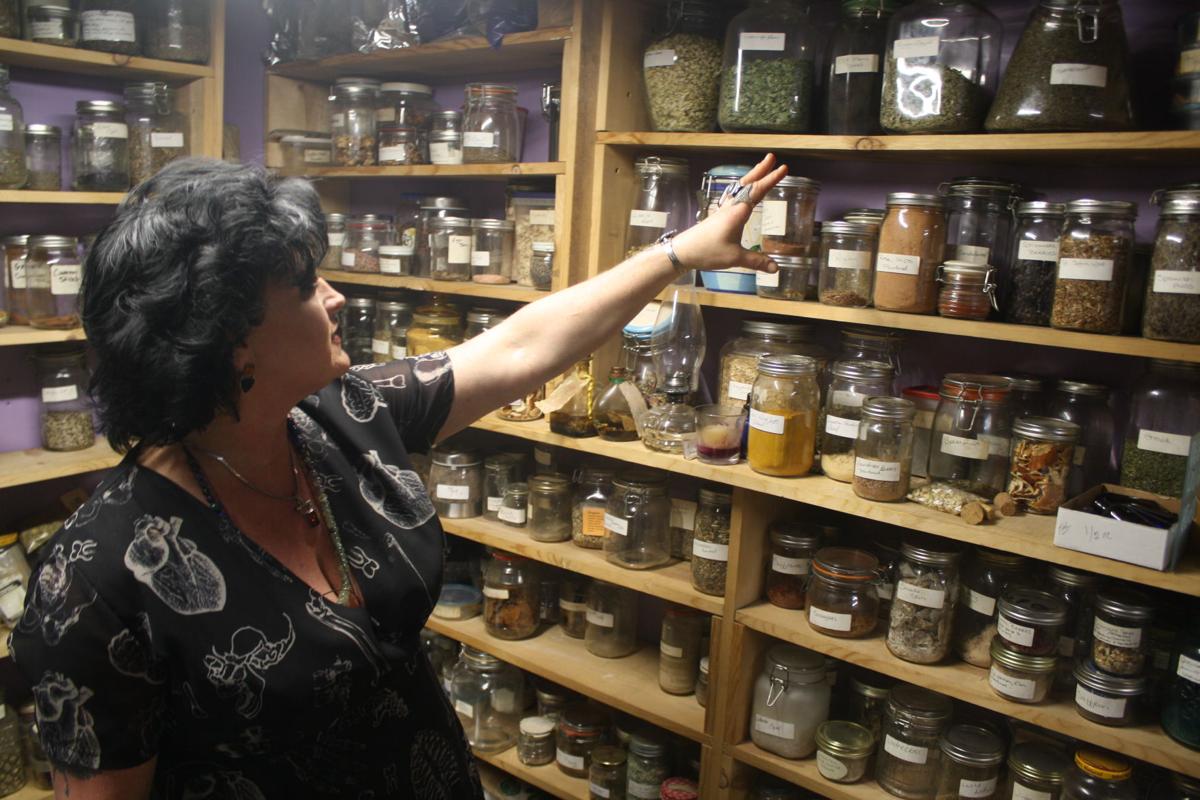 Garnett shows her collection of herbs and other ingredients used to make homemade remedies.

Rhonda Garnett, a.k.a. Willow Wytch, stands in front of her establishment, Wytchwood Herbal Shoppe. The shop is coveted by many and there’s currently a fundraiser to help keep it going.

Garnett shows her collection of herbs and other ingredients used to make homemade remedies.

HOUSTON — There’s a special kind of shop in Houston, just down the road from Three Bears. The Wytchwood Herbal Shoppe is a quaint, purple building facing the Parks Highway.

It’s a place to find all sorts of things, from handcrafted herbal remedies to custom made jewelry and other unique finds. Above all, it’s meant to be a place to heal, be it with the salves or teas or an attentive ear ready to offer advice and refuge to anyone.

“So many different people find it as a sanctuary,” owner Rhonda Garnett, a.k.a., Willow Wytch said.

Wytchwood is there to be a safe haven for anyone who needs it, a judge free environment where people are encouraged to be themselves.

It’s a place that welcomes the outcasts and the misfits just as much as it invites the steady regulars and the more casual shoppers. One regular, Courtnie Metzger, can usually be found at Wytchwood.

“It’s the only place I can really relax,” Metzger said.

Metzger typically goes there Monday through Friday. She is a caretaker and started taking her client there a year ago, finding that the place very beneficial for them both.

Metzger often brings her son who plays while her client follows her daily rituals correlating with the shop, soothing her mind with the routines. Metzger said that she treasures the relaxing atmosphere all the steady supply of support from Garnett.

“She’s helped me through a lot of problems,” Metzger said.

Numerous regulars like Metzger feel this way and that’s why Wytch feels compelled to keep her shop going. She is currently facing financial hardship, tying to support her boyfriend, Les Copeland, with his medical issues while maintaining her business.

“I don’t want to toot my own horn but I do a lot of good,” Garnett said.

Tiffy Iman, Kristina Gruno and Buphalo Barbie created a Facebook fundraiser called “Another piggie bites the dust...” referring to Copeland’s bout with diabetes and losing his toes. Donations will help Wytch cover Copeland’s care, household and shop expenses to keep the doors open. Over the last 15 days, 25 people have raised $1,000 out of the $5,000 goal.

Garnett said that she has a tough time asking for help like this but appreciates all the support from her close group of friends she calls her “tribe” and that of the community.

“It’s always been a group effort… Everybody’s helping me keep the place going. I want to be here. I don’t want to be greedy. I just want to stay here,” Garnett said.

Garnett said that she established her business over 11 years ago, long after she started practicing witchcraft. She said that she knew as a young girl that she was a witch.

“I was born with it,” Garnett said.

Garnett grew up in Ohio knowing she was different and people could tell. When she was growing up, she always dressed as a witch for Halloween, even as her mom suggested another kind of costume. For her, being a witch was much more than a costume to wear one a year. She said that spent several years with her broom in the closet before finally taking her broom out of the closet when she was about 32 years old.

She said it’s been a long and “epic” journey getting to Alaska, making a business out of her witchcraft, learning new ways to help people with her gifts and craftsmanship and becoming the witch she was born to be.

This current location is her second, moving from the original in Willow about three years ago. She’s hosted several community events and participated in local happenings like the annual parade at Houston Founder’s Day.

Garnett said things have been going well in her now home, pleasantly surprised by the overall acceptance.

Those walking into the shop will often be greeted by a bulky and friendly Blue Nose Pitbull/American Bulldog mix dog named Dink. Looking around, they will find a spectrum of herbs, local art, jewelry, soaps, herbal teas, herbal salves, incense, candles, vintage and other unique and handcrafted finds.

Garnett said that she analyses each person who comes through her shop. She talks to them, forming a prognosis for what herbal blend or tincture would work best for them.

“We’ve got what you need,” Garnett said, citing her shop’s motto.

People can buy tarot cards or they can ask to have a tarot reading. They also have a pagan meeting at the last Sunday of every month.