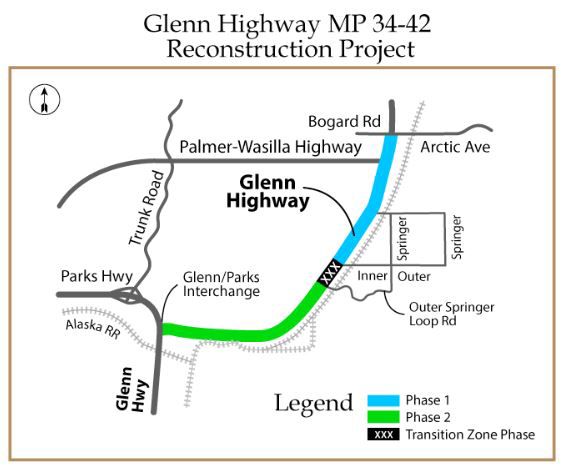 PALMER — The expansive Glenn Highway reconstruction project is underway and Palmer businesses like the Noisy Goose Café and their neighbor Edmonds Auto Import are in the midst of the transition.

Owners of both establishments said this process may slightly affect their current business but in the long run, the ease of access and overall road improvements will benefit everyone.

Edmonds and her husband Kevin have owned and operated from this location since 2013. She said they’re waiting to make upgrades to their exterior and add a dog park on the side until the construction is over. Anyone who walks into Edmonds will be greeted by their two chocolate colored dogs, Pete and Nod.

Construction crews are currently creating a new frontage road near Colony Way. Margaret Road is going to be the new way to access the Noisy Goose and Edmonds. The road loops around the back and customers will be able access the café or the auto shop through their rear parking lots.

There will no longer be highway access but there will be three access points on the frontage road, each with a traffic signal, according to Todd Smith, construction project engineer overseeing the project.

Noisy Goose owner Glenda Nafus said that she lost about three-quarters of her back parking lot but they will make it work just fine.

“I think the state’s done a fantastic job,” Nafus said.

She said the hectic highway has only increased in traffic over the years. She felt like something needed to change because it’s a dangerous intersection.

She said that she’s had nothing but positive conversations with project managers and the crew. She said they’ve been very thoughtful during this process and she’s hopeful for the future.

There are two phases to the Glenn High Way reconstruction project, which will add lanes, widen shoulders, create turn lanes and frontage roads, and other traffic and safety related improvements.

Smith said that phase one began last summer and everyone will be working this coming year to do most of the heavy civil construction work like excavation, embankment, infrastructure, conduits, and setting wires. Smith said they’re striving to complete phase one by July 31, 2020.

Smith said they are also creating a new road in between the state building and Edmonds called J Street, which will be connected to the Margaret Road and Glenn Highway with a traffic signal.

Edmonds said that she lost about 20 feet from the front parking lot but she is excited for J Street because it goes directly to their parking lot. She felt the same way as Nafus when thinking about the long run.

“It really needed to be done,” Edmonds said.

Smith said this project will help make this area right outside downtown Palmer with the Alaska State Fairgrounds on one side and longtime local businesses on the other safer overall with better ease of access.

“The frontage road is going to take all the traffic and funnel it to a traffic signal where those turn movements happen in a location that people are expecting,” Smith said.

This means fairgoers will also have safer and easier access to the grounds both in the vehicles and on foot with designated turn lanes and cross walks.

Smith said they’re striving to finish the traffic signal lanes with functional light before snowfall but there’s several variables to consider. Phase two is scheduled to in 2020 on the heels of phase one and will start only when it’s complete.

During phase two, the project team will continue to work with adjacent property owners to acquire the right-of-way needed for the project and design refinements, according to a fact sheet from the Alaska Department of Transportation and Publix Facilities. A railroad siding is also planned between Outer Springer Loop and the fairgrounds during phase two.

This reconstruction project also includes a 10-foot-wide separated pathway along the north side of the Glenn Highway from the Matanuska Lakes State Recreation Area and extending into Palmer.

For more information on construction visit: www.brooks-alaska.com/glennhighway or call the project hotline at 907-373-0061.