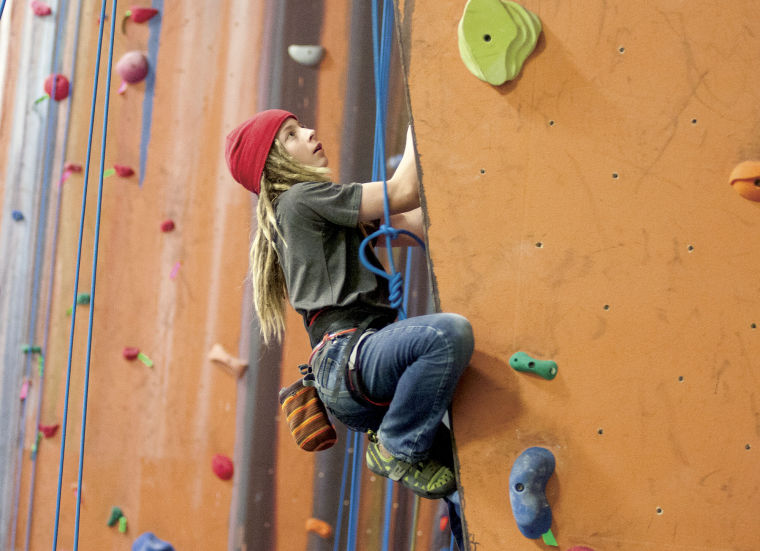 Noah Samuelson looks for the next hand hold while climbing a route at the Rock On Climbing Gym in Wasilla Friday evening. 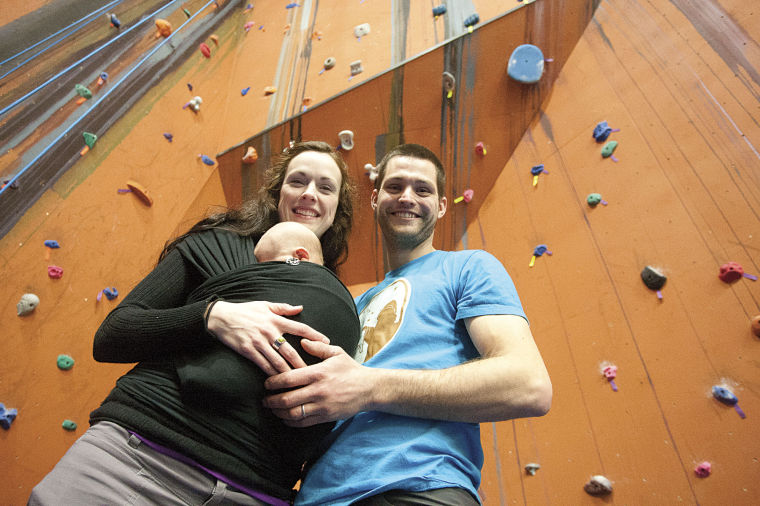 Rock On Climbing owners Amanda and Cole Lund stand inside their new 7,200 sq foot facility at 1080 N. Wasilla Fishhook Road in Wasilla. The climbing gym has been six years in the making for the husband and wife duo.

Noah Samuelson looks for the next hand hold while climbing a route at the Rock On Climbing Gym in Wasilla Friday evening.

Rock On Climbing owners Amanda and Cole Lund stand inside their new 7,200 sq foot facility at 1080 N. Wasilla Fishhook Road in Wasilla. The climbing gym has been six years in the making for the husband and wife duo.

WASILLA — It has been a six-year climb to get to the base of what Cole and Amanda Lund see as a catalyst for the climbing community. Now with 15 days into their Rock On Climbing Gym, the duo prepares to head for the summit.

The husband and wife team grew up in the Valley. Both left for college with feelings of never returning. Now they find themselves back in the place they call home. Amanda taught at Tanaina Elementary and Cole was a steel worker for American Steel and the Arctic Slope Regional Corp. The common thread for the two is climbing.

So why not start a business based around that?

For Cole it was also about the aspect of just getting out to climb.

“We were not staying in shape as much as we wanted and we found we were going out more to just get in shape so we could climb. We were just not getting the most out of our sessions,” he said.

So they decided to build a gym.

“We liked the idea,” he said. “We wanted to do it for us and the community.”

“We talked to so many people that said I used to do it, and I would do it more if it was just more accessible,” added Amanda.

So began the process of creating a climbing gym that would grow with the climbing community. The two traveled outside to do research and see what was working and not working for other gyms. What they found was that each gym was based around a community of like-minded people.

“That is what made us want to do a gym,” said Cole. “If you go to Colorado or any of those towns a climbing gym isn’t a gym. It’s a meeting place. A place to meet your climbing partners, people you want to hike with. It’s a place for information on trails and routes for climbing.”

“We want to be the outdoor hub.”

Both Cole and Amanda realize that running a business and climbing is an uphill battle. Keeping the dream alive and securing the funding was tough.

“Money,” answered in unison when asked what was the hardest part.

“Everyone believed in the idea,” said Cole. “Wells Fargo was super on board for like five or six months. Then it all fell through.”

Both agree it has been frustrating. But like climbing both refused to give up and climb back down. “We had sacrificed too much,” said Amanda. We had people coming out of the woodwork telling they would love a climbing gym she said.

But keeping focused was hard said Cole. “You always hear as a kid coaches saying you can do anything you set your mind to. And really if we had taken our eye off the goal it would have slipped.”

Every time there was a set back Cole said he would be thinking that he really like what he was doing work wise. “But,” he said. “I would just have to focus back on it. It was crazy, but we just stuck with it.”

As for the future, both Cole and Amanda agree that the community will make that decision. Cole said they designed the building to be outgrown in two years. But, he added, that will be up to the climbing community.

“Really this is about the community. The community is going to push it.”

The plan has always been about building that cohesion among the climbers and friends. “If it is a community thing people can’t just not go to that business because it is part of your life,” said Cole. “It’s where your friends are. It is where you get your information for the outside. It’s a family. It’s what you do.”

For now they want to build on what they have. Amanda hopes to add some home school type activities after the winter break, and Cole hopes to see enough business to add an outdoor climbing park and bouldering area in the summer. There are also plans for a small retail area in the gym. “We do rent gear,” said Cole. “But we hope to do a little retail spot. We should have inventory in the next two weeks.”

Cole said it will be small, but they will carry harnesses so at least people can try them on and order them.

For now they will just see what the climbers want. Cole said they started with a taste — everything from lead, top rope, bouldering and slab to vertical, overhangs.

“We wanted to give our community a little bit of everything. If we find out one type is bigger than the other then we will adapt to fit the community,” he said. “I’ll build what ever they want.”