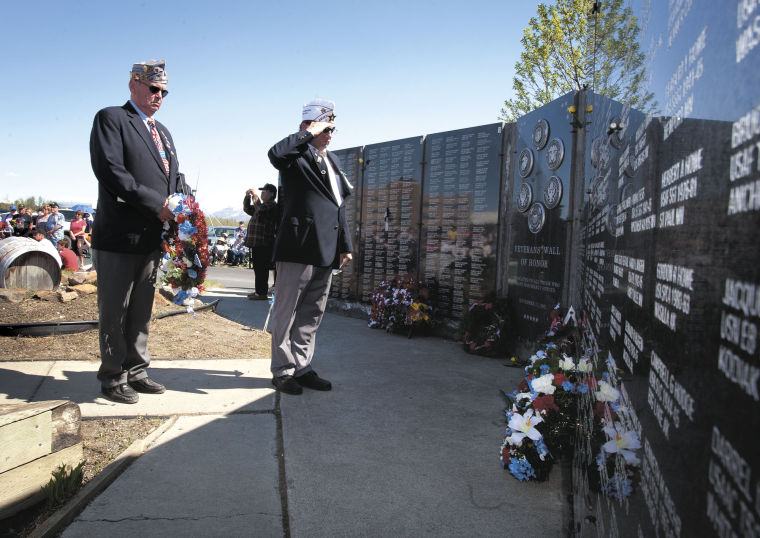 AmVets Post 11 Commander Eugene Zola salutes after placing a wreath at the base of the Veterans Wall of Honor Monday afternoon. Standing to Zola’s right is Robert DeLoach, also with Post 11. 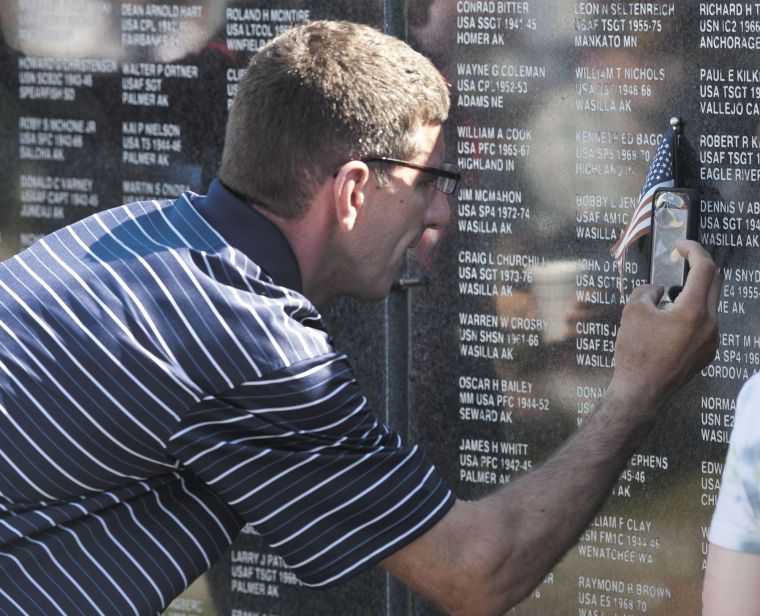 Elwyn Fischer takes a photograph of his father’s name, Robert B. Fischer Sr., on the Veterans Wall of Honor Monday afternoon. 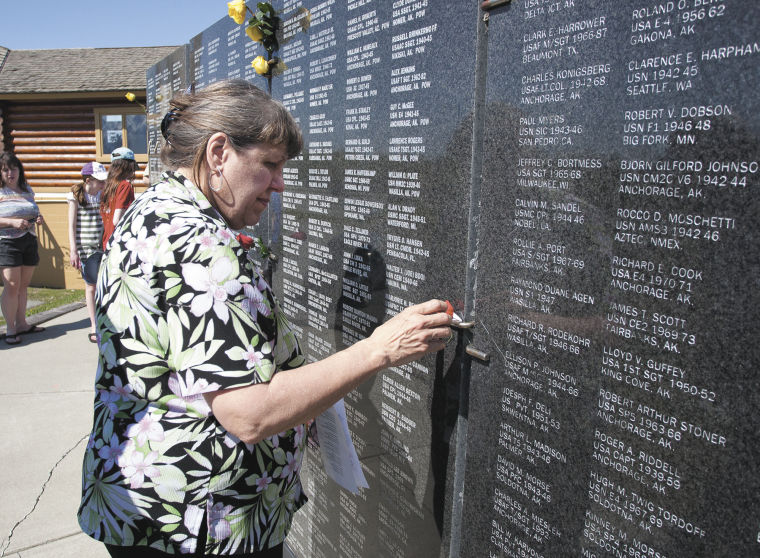 AmVets Post 11 Commander Eugene Zola salutes after placing a wreath at the base of the Veterans Wall of Honor Monday afternoon. Standing to Zola’s right is Robert DeLoach, also with Post 11.

Elwyn Fischer takes a photograph of his father’s name, Robert B. Fischer Sr., on the Veterans Wall of Honor Monday afternoon.

PALMER — Sacrifice is woven into the fabric of military service.

Service demands the highest sacrifice from some men and women who serve in the armed services, but all who wear the cloth sacrifice, Lt. Col. David McCleese told the hundreds of Alaskans who gathered at the Veterans Wall of Honor at the Mat-Su Convention and Visitors Bureau to mark Memorial Day on Monday.

“We all know when we take our oath that our lives belong to the nation we serve,” he said. “Today we mark sacrifice.”

The Mat-Su crowd gathered under cloudless blue skies to remember, mourn and “pray for permanent peace,” according to the joint resolution approved by Congress May 11, 1950, which established Memorial Day.

McCleese said that although the U.S. has been at war for 10 years, the majority of Americans still live lives untouched by war.

“It falls to us here to insure that those who remain know the cost of freedom,” he said. “Today is sacred because by publically stating our resolve, we pass on that resolve to future generations.”

Wasilla’s VFW Post 9365 had the honor of conducting this year’s ceremony, complete with singing of the national anthem, speeches from dignitaries, placing of wreaths, a bugler’s performance of “Taps” and a 21-gun salute.

Among those who sacrificed was veteran sailor and VFW state commander from 1981-82 Daniel A. Huff. He was there to remember his two tours aboard minesweepers during the Korean War before the U.S. Navy sent him back to dry land as a sonar instructor for four years.

Seated nearby was Merchant Marine Commander Eldon Gallear, who recently organized the first meeting of the Mariners’ Alaska Greatland Chapter.

Sen. Murkowski said Memorial Day is a time when Americans pause to pay tribute to those patriots who never returned.

“Our debt to them is one we can never repay,” she said. “We must honor those we lost by living up to the ideas they died defending.”

Many U.S. soldiers were wounded during the wars in Afghanistan and Iraq, she said. But not all of their wounds will be obvious.

“Some wounds of war are invisible,” she said. “But these wounds are no less serious.”

Murkowski said the nation must meet its commitments to the men and women who served.

“No more excuses about how long it takes to process veterans’ benefit claims,” she said.

Before Mayor Johnson read a proclamation from Gov. Sean Parnell, she offered a few words of her own.

“I want to start with a huge thank you from us,” she said. “We wouldn’t be able to enjoy this beautiful, calm setting without the horrors you endured during the war.”

After the ceremonial placing of wreaths and performance of “Taps,” Rep. Hughes capped the ceremony by announcing a June 2 signing of legislation to designate Alaska a Purple Heart State.

Hughes said the Alaska Chapter of the Military Order of the Purple Heart currently reports having about 300 members and the Alaska Division of Motor Vehicles has issued more than 700 Purple Heart license plates, but she said there could be more recipients who are thus far unrecognized.

“If you are a Purple Heart recipient or know someone who is, contact my office,” Hughes said. Contact Hughes office at 376-3725.