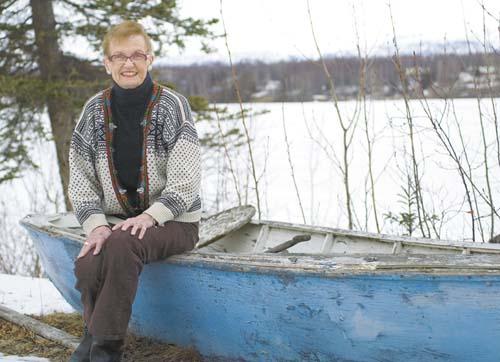 Katie Hurley sits on the edge of her late husband’s sailboat at her Wasilla home. Hurley, who turns 90 years old Wednesday, is one of the last surviving participants in the drafting of Alaska’s Constitution during the Constitutional Convention in Fairbanks between November 1955 and February 1956. See today’s Valley Life, page A10, for more. ROBERT DeBERRY/Frontiersman 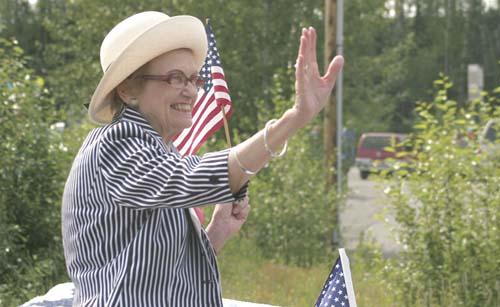 Photo courtesy Heather Resz Katie Hurley waves to parade-goers during the Wasilla Fourth of July parade in this 2009 photograph. Hurley rode at the front of the parade as its grand marshal. She is 90 years old. 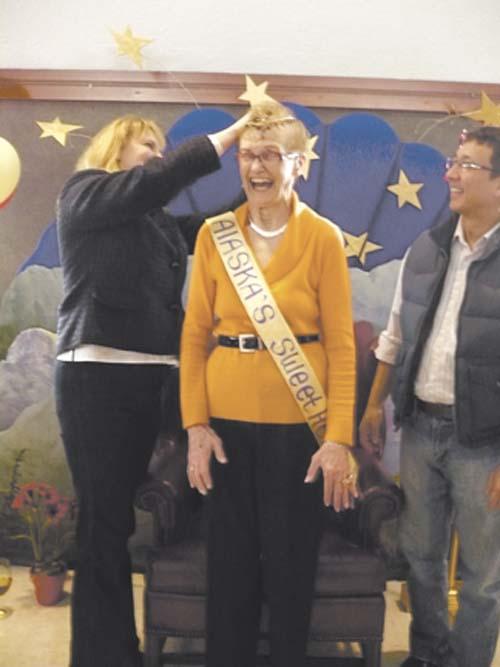 Palmer Mayor DeLena Johnson crowns Katie Hurley ‘Alaska’s Sweetheart’ during her 90th birthday bash at the Palmer Depot Sunday afternoon. The event was organized by Mat-Su Democrats and made possible by more than $4,000 in donations by friends and family members. K.T. McKEE/Frontiersman 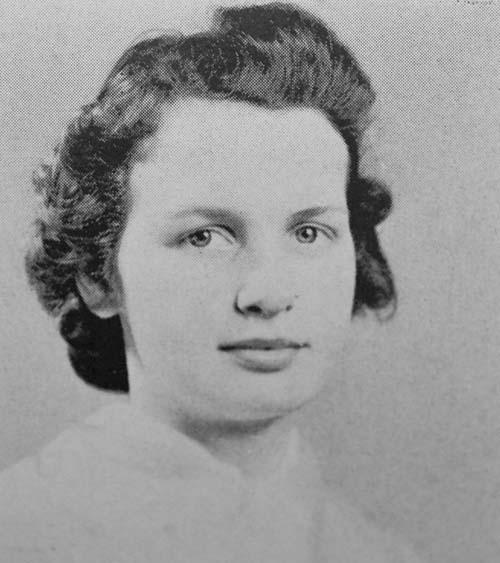 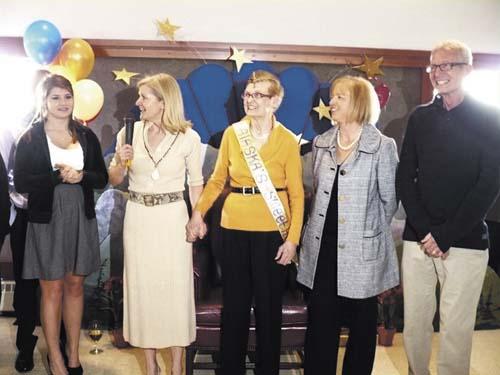 Katie Hurley sits on the edge of her late husband’s sailboat at her Wasilla home. Hurley, who turns 90 years old Wednesday, is one of the last surviving participants in the drafting of Alaska’s Constitution during the Constitutional Convention in Fairbanks between November 1955 and February 1956. See today’s Valley Life, page A10, for more. ROBERT DeBERRY/Frontiersman

Photo courtesy Heather Resz Katie Hurley waves to parade-goers during the Wasilla Fourth of July parade in this 2009 photograph. Hurley rode at the front of the parade as its grand marshal. She is 90 years old.

Palmer Mayor DeLena Johnson crowns Katie Hurley ‘Alaska’s Sweetheart’ during her 90th birthday bash at the Palmer Depot Sunday afternoon. The event was organized by Mat-Su Democrats and made possible by more than $4,000 in donations by friends and family members. K.T. McKEE/Frontiersman

WASILLA — They say that within the first five minutes of meeting Katie Hurley, you already know three things about her: She’s an Alaskan, a Norwegian and a Democrat.

“That about sums her up,” Hurley’s oldest daughter, Susan Derrera, said Sunday during her mother’s 90th birthday bash at the Palmer Depot. “It’s not surprising that a bunch of her friends wanted to put this party on for her and that those friends are the Mat-Su Democrats. She’s been very active in Alaska politics since she was 19 years old, so we see a lot of key figures here through her work in Juneau and elsewhere.”

A large photo of Hurley with President John F. Kennedy hung on the depot wall. Hurley pointed out to the more than 200 gathered for the party that the pearl necklace she was wearing with her clingy, knit dress in that photo was worn by Derrera at the party to symbolize a fashion feat she remembers fondly.

“Susie was born five weeks before that and I was thrilled I could get into this dress!” Hurley said as the crowd roared.

As the Bel Canto Ensemble sang Hurley’s favorites such as “K-K-K Katie” and “It’s Only a Paper Moon,” she was crowned “Alaska’s Sweetheart” Sunday by Palmer Mayor DeLena Johnson and given a gold sash before taking a seat on a burgundy “throne.”

The backdrop for the throne was a familiar mountain scene painted by Mat-Su Democrat Suzanne McCausland on old campaign and coal protest signs.

“Those signs have quite a history, so they seemed perfect for her throne,” said McCausland, whose father narrowly escaped dying in a coal mine explosion that took the lives of seven of her classmates’ fathers when she was growing up. “I grew up with coal dust in my lungs and now I can’t sing. These kinds of issues are important to Katie, too. That’s why we love her and we hope she sticks around for quite a while longer.”

Hurley, who has lived on the banks of Wasilla Lake for about 50 years now, fought off breast cancer 20 years ago and is one of the last surviving participants in the drafting of Alaska’s Constitution during the Constitutional Convention in Fairbanks between November 1955 and February 1956.

As chief clerk at the convention and then secretary of the Territorial Senate in 1957 and the first state Senate in 1959 and 1960, Hurley’s dedication to the state and the causes most important to her span more than five decades and continue to this day.

Born Olga Katherine Torkelsen in Juneau March 30, 1921, as the middle child of Norwegian immigrants, Hurley and her two siblings learned early to be self-sufficient and strong when their father died of colon cancer at age 46. Hurley was only 14 at the time.

“When my father was dying of cancer, he didn’t have insurance so he was at home,” she recalled Wednesday during an interview at her modest Wasilla home. “I was the one who was called on to help my mother take care of him and that really bonded us. It was a terrible loss to me. He was the one who had taken me to the library and introduced me to books and instilled the importance of reading.”

Hurley said that although her mother was hard on her growing up, she admired her for not spending the $10,000 life insurance check she received when her father died. Instead, she put it away for an emergency fund and ended up putting it to good use when her younger sister needed heart surgery later in life.

“My sister never would have been able to get the surgery if she hadn’t had that money,” Hurley said. “That made a big impression on me.”

Also key in helping Hurley develop into the caring, hard working person she grew to be were her teachers, she said. Her sixth-grade teacher, in particular, was instrumental in helping her reach her full potential, she said.

She ended up graduating Juneau High School as salutatorian in 1939 and spent only one year at businesses school in Portland, Ore., before returning home in the fall of 1940 to put her shorthand and typing skills to good use.

She was hired first as clerk-stenographer in Gov. Ernest Gruening’s office in 1940, then advanced to secretary to the governor in 1945.

“Because I was so eager to learn, the governor would tell me to stop him and ask him questions along the way,” she said of Gruening. “I was using the dictionary every day because of his vast vocabulary. He really taught me a lot. And because I was such a fast typist and could keep up with him, I would just tear off the sheets as I finished them and hand them to him. We did that with a lot of his speeches. He gave me a lot of political insight about Washington.”

When she became pregnant with her first child, David, it wasn’t the norm for pregnant women to be working, let alone be seen in public, she said.

But she continued to work for Gruening and only missed two weeks of work when David was born, she said.

“My husband Joe wasn’t very happy about having to push a baby buggy down the street to my mother’s apartment every morning,” she laughed, explaining that Joe Alexander had his own photography studio, so had more flexibility in helping care for the baby while she worked in the governor’s office.

That career ended with the election of President Eisenhower and the appointment of Governor Heintzleman in 1953.

Her life in politics was only just beginning, however.

She was appointed to the state Board of Education in 1971 by Governor Egan and reappointed by Governor Hammond, serving as president of the board for the next seven years.

Although she didn’t win that post, it inspired her to serve as executive director of the Alaska Commission on the Status of Women from 1980 to 1984.

By then, she was primed to run for the state House and became the Matanuska Valley representative in 1984, serving as chair of the state Affairs Committee and a member of the House Education Committee until 1986.

She was appointed to the Commission for Human Rights in 1987 and served until 1992 and received an honorary Doctor of Laws degree from the University of Alaska Southeast for distinguished public service in 1995.

She also was appointed to the state Personnel Board in 1996 and the Alaska Judicial Council in 2000 to fill an unexpired term until 2004.

She also was elected to the Matanuska Telephone Association Board of Directors three times, serving from 1995 to 2004.

Although Hurley’s been taking life a little easier since then, she’s remained active in local politics and even ran as a write-in candidate against House District 14 incumbent Vic Kohring in 2006.

“When she told me she was running with a write-in campaign a few years ago against Kohring, I thought she was crazy,” Hurley’s youngest daughter, Mary Hilowitz, said during her mother’s party Sunday. “But she really is amazing. She deserved this party. I think it’s been fun for her to see everyone. She knows so many people. We can’t go anywhere without people coming up to her. She’s really quite the celebrity.”