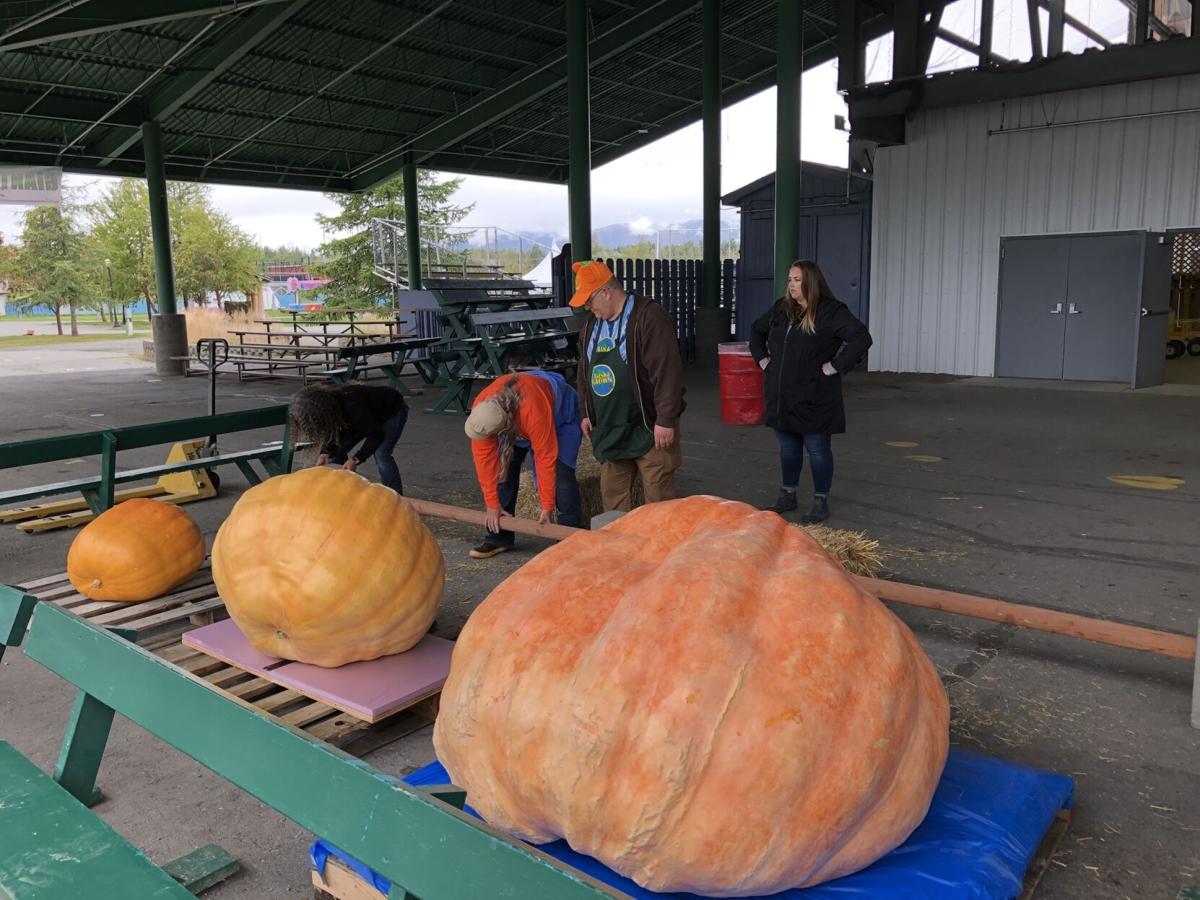 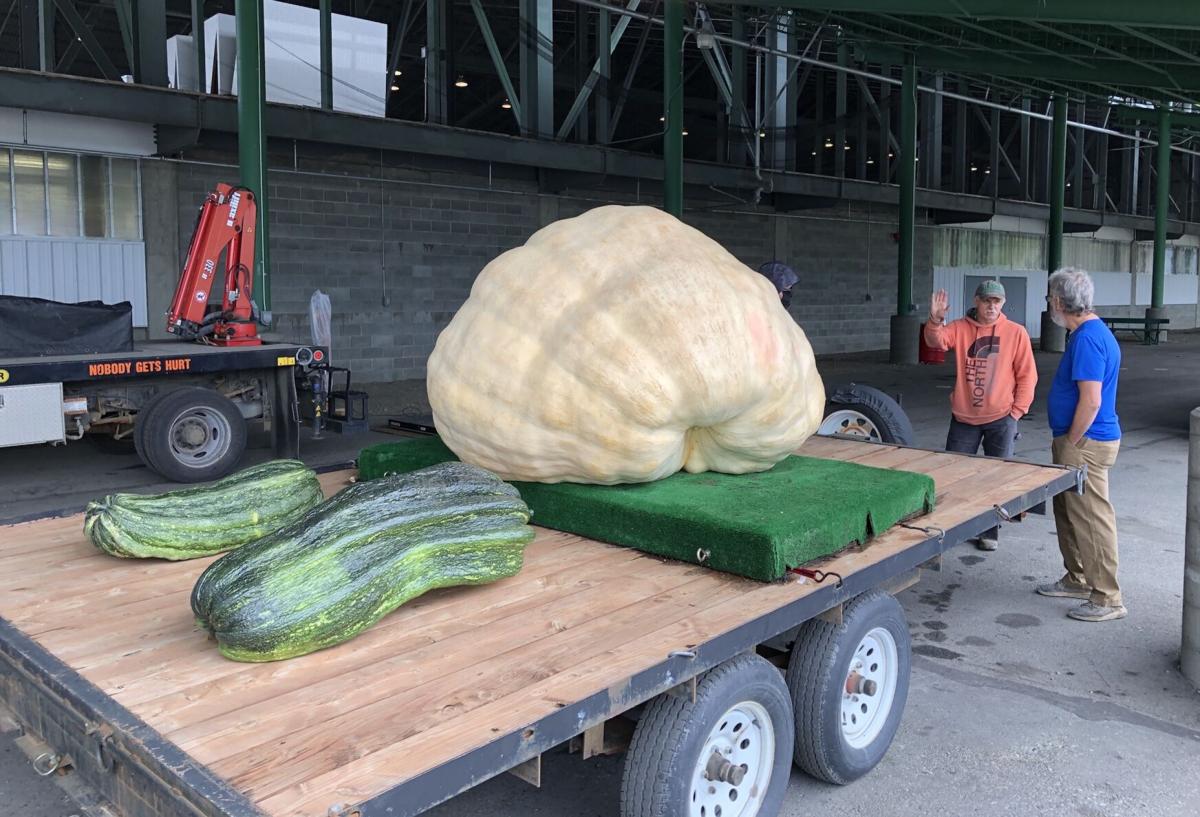 Even though the Alaska State Fair was cancelled this year, the Harvest Fest, which starts, Friday will include the traditional giant vegetables.

Even though the Alaska State Fair was cancelled this year, the Harvest Fest, which starts, Friday will include the traditional giant vegetables.

PALMER — Gardeners across the state stuck to their giant crop growing ways and submitted the accumulations of their labors to an unprecedented virtual weigh off event live streamed by the Alaska State Fair staff and volunteers while gearing up for the fair’s alternative, Harvest Fest.

In spite of the conventional fair and giant vegetable weigh-offs being altered due to social distancing efforts, a number of passionate crop growers kept doing what they do best and participated in this year’s weigh-off.

A total of four giant pumpkins submitted by four different growers were submitted into the weigh-off, with 15 pre-registered giant cabbage growers, according to ASF crop superintendent and horticulture manager Kathy Liska, a.k.a. “The Queen of the Crops.”

She said all the giant crops will be on display alongside other agricultural entries on display throughout Harvest Fest.

“Everybody planted their gardens with the fair in mind. This is what we do in the end of August and September,” Liska said.

Harvest Fest, which starts Friday at the Alaska State Fairgrounds, will include some of the popular events and exhibits people expect each year, including the giant cabbage and pumpkin exhibits, tractor displays, and the Junior Livestock Auction benefiting children and teens in the 4-H program.

There will also be several agriculturally inspired games competitions like the scarecrow and goat milking contests and working dog demonstrations.

“It’s an agricultural fair. It’s kind of a thanks to the Valley,” Liska said. “We’re kind of going back to the roots of the fair, which is agriculture.”

Anchorage resident Dale Marshall squashed the Alaska State Fair record for giant pumpkins during the 2019 weigh-off. Marshall’s 2019 pumpkin came in at 2,051 pounds, well above the previous record and his own expectations. This year’s entry wasn’t as big, but it still came in at 1,742.5 pounds, the second biggest pumpkin grown in the state.

Marshall said this year’s weigh off was a “bittersweet” experience.

“I’m happy just to get a pumpkin here,” Marshall said.

Marshall said that he was already two months into growth when fair officials announced the cancellation. He pushed on anyway to follow his passion, noting that he has to play catch up when he found out about the virtual weigh-off. He said that all in all, the result of 90 days of work was worth it.

“Not every year is gonna be perfect,” Marshall said.

Liska said that she’s glad they were able to find an alternative means of celebrating Alaskan agriculture this year.

Liska has worked in the fair’s crop department for 25 years. She said the Harvest Fest is the fair’s way of giving back to the community for supporting them over the years.

“We all do this because we love it,” Liska said. “There’s volunteers who’ve been here longer than I have… It’s a really cool thing to be involved with. There’s a lot of special people in this place.”

Liska’s eclectic group of staff and volunteers vocalized their shared passion for reuniting with their fair family each year. She said they’re all excited to come back even bigger and better next year, hoping there’s no need for a second cancellation.

“Hopefully this is just a one time thing,” Liska said. “We’re gonna come back and we’re gonna raise the roof in the barn.”

The 4-H families will still be able to sell their livestock, even though it’s not technically a 4-H event this year due to COVID-19, according to Crystal Roberts. She said that ASF and the Alaska Farm Bureau are sponsoring this year’s Junior Market Livestock Auctions and Shows.

“We’re so thankful that they’re doing this for these kids,” Roberts said.

The auctions will be held in a separated area that’s closed to the public during Harvest Fest. The event is much smaller this year, but it will still help offset the costs of Roberts son Canyon and daughter Kayleena’s summer livestock projects.

Canyon said that he loves working with animals and just animals in general and his sister said that she enjoys being a trainer.

“It’s kind of the main event of the year, and all our hard work gets paid off here,” Kayleena said.

Admission to this weekend’s Harvest Fest is $6 per person, and children 5 are admitted for free. Parking is free. Tickets must be purchased online or by phone prior to the event.

Anyone who is experiencing symptoms of COVID-19 is asked to remain home and visitors are strongly encouraged to wear masks.