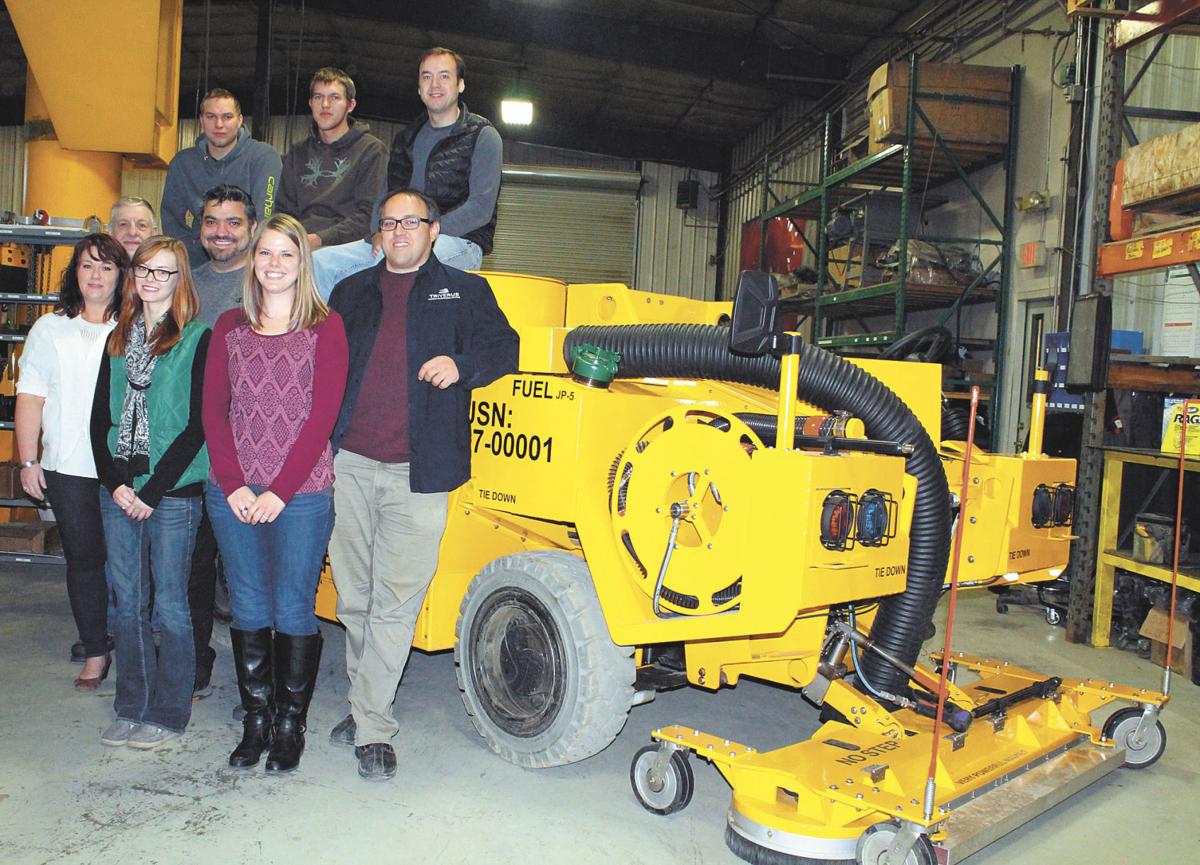 Palmer-based Triverus is proud to show that quality, high-dollar manufacturing products can be exported from Alaska. Pictured above, back row, left to right, Roger Helminen, Devon Berg, Tristan Kenny; middle row, l-r, Darrel Petersen, Mathew Hakin, Triverus President and CEO Hans Vogel; front row, left to right; Paula Smith, Julie Studinski and Nicole Cullen are proof of that. The group is part of the company making substantial inroads to produce a machine worthy of the US Navy. 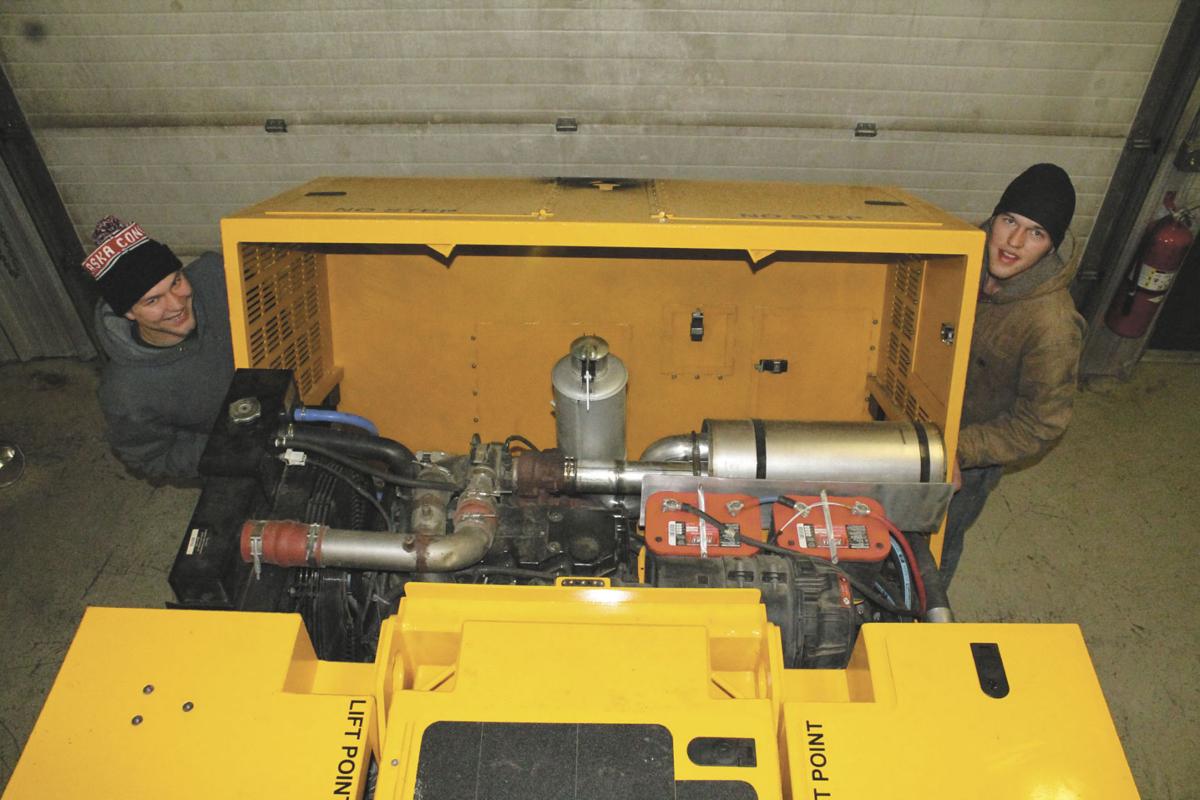 Palmer-based Triverus is proud to show that quality, high-dollar manufacturing products can be exported from Alaska. Pictured above, back row, left to right, Roger Helminen, Devon Berg, Tristan Kenny; middle row, l-r, Darrel Petersen, Mathew Hakin, Triverus President and CEO Hans Vogel; front row, left to right; Paula Smith, Julie Studinski and Nicole Cullen are proof of that. The group is part of the company making substantial inroads to produce a machine worthy of the US Navy.

PALMER — While some may say there are no large manufacturing export markets in Alaska, one Palmer business is proving otherwise. Triverus LLC has just shipped its second of four Mobile Cleaning Recovery and Recycle System (MCCRS) units to the US Navy.

“Our team has worked with the Navy for 10 years in the R&D (research and development) phase to meet all their requirements and create a state-of-the-art, hard surface cleaning machine built right here in Palmer, Alaska,” said company President and CEO Hans Vogel.

Vogel was referring to the machine used aboard aircraft carriers to clean and restore necessary friction on flight deck surfaces. The machine, using patented technology, dramatically reduces pollution runoff into the ocean and can also take care of minute amounts of metal and other solid particulates that, if they made their way into a jet engine, could lead to catastrophic failure.

The seven-plus ton unit utilizes patented technology to clean, recover and recycle foreign object debris (FOD) from the flight decks of American aircraft carriers. It does so using nothing more than water and, according to government tests, out-performs human workers taking on the same task. It is more thorough, faster and provides betters results.

Vogel said Triverus is a manufacturing and research and development company.

“It is important to show there is manufacturing happening here that there is intellectual property and value,” Vogel said about the standing mentality that there is little manufacturing exporting taking place in Alaska. “There are other players up here as well and I think they’re not recognized. There is a manufacturing sector. We’re just not shipping our natural resources out. We’re using technology and advanced design processes to get to higher place.”

Triverus has its roots in Anchorage. Vogel said he started in Muldoon in a double car garage in 2001.

“We had no manufacturing capability. We had a chop saw, coffee maker and a plastic table. And the Navy had awarded us a contact, a very small one,” said Vogel. “We were one of 14 companies to participate at that lower level. From that level, we were able to develop and ultimately transition.”

Shortly after the garage, Vogel decided the valley offered a great spot to set up shop.

“Palmer offered a reasonable regulatory environment, three-phase power, city water and sewer,” Vogel said. “It had talent here that didn’t want to commute to work. We could develop our business here at a lower cost. If you’re starting out a business, you don’t want to be scraping for basic (infrastructure) necessities and doing a startup. If you’re starting a business, you want all those things ready to roll.”

“All but one of my employees are from the valley and live here. To be able to create and live in the same community your in is a valuable asset. A lot of my employees have been with me for over a decade,” he said.

Vogel said after making the move to Palmer, the company started investing in heavy technical manufacturing equipment. He noted there are not many other companies in Alaska that have invested similarly.

The plan has led to Triverus reaching a low rate initial production of four MCRRS machines which have been on US aircraft carriers all over the world for approximately the past four years. Over that timeline, Triverus has worked out problems areas, and improved its product to where it now meets rigorous U.S. Navy standards.

“And in some cases solving extremely poignant FOD problems. Anything loose that can get into an engine. Managing FOD and remediation is a gigantic priority,” Vogel said. “The USS America, which is brand new out of San Diego, our machine just went out with it. It’s easy to say you’re just the janitor...but cleaning that space is a really relevant part of that system.”

Vogel explained that a carrier can go into complete shutdown if FOD is found on-deck, or if liquids such as oils, lubricants or water are discovered. The MCRRS handles all of that. He said the Navy wanted to move beyond the bucket and mop method of cleaning. Vogel said multiple machines could do similar jobs but not as well and the MCRRS does it with one.

“Every time you go on a ship, some poor group of sailors are maintaining something to do with corrosion as well. It’s a quality of life issue. Sailors are performing menial tasks. The MCRRS does a better job with less people because of mechanization,” Vogel explained.

If things stay on course, Triverus is anticipating landing a multi-million dollar contract to build up to 45 more units, or a full procurement contract with the government. That could expand further if Triverus receives the nod for maintenance management.

“Every two years, everything has to be taken apart, reassembled and sent back. We’re tentatively set to start full production this spring...another 45 units. We can currently build one unit every two months but that will change as we swing into full production,” Vogel said.

Eric McCallum, a Triverus investor and partner noted the company has a second manufacturing plant in Burlington, VT. where it makes the MCV (Municipal Cleaning Vehicle) a smaller machine  used in commercial applications for cleaning parking garages and paved dock areas in coastal cities. He noted Minneapolis International Airport has five MCVs just for cleaning their parking garage.