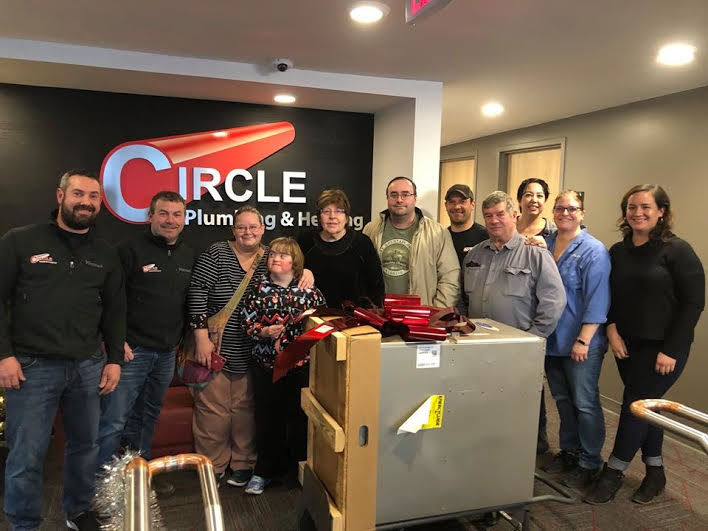 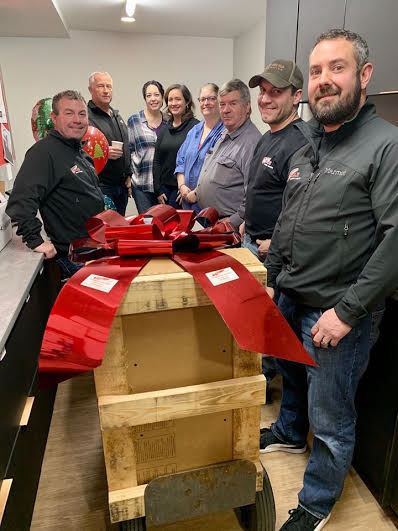 Circle Plumbing and Heating staff stand near the free furnace prior to installation, which was also free. 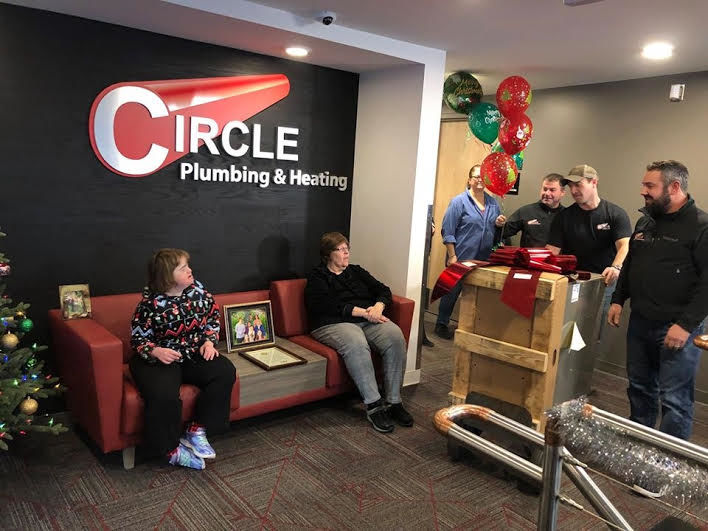 Circle Plumbing and Heating staff stand near the free furnace prior to installation, which was also free.

Semonin’s daughter-in-law Melaine Anderson nominated her for the second straight year. Anderson was overjoyed that Semonin was selected. She got choked up recalling the day the news dropped and how thankful she was towards Circle Plumbing and Heating.

“It was really the best thing just because I knew she needed it so bad; and I can’t even imagine how they feel knowing that they’ve helped so many people before,” Anderson said. “So, it was really cool.”

Semonin is Anderson’s sister Mary’s mother-in-law. Anderson said they all call her “Grandma Joyce.” She said Semonin doesn’t have any direct family members in the state aside from her son; and her daughter Stephanie who’s in her 30’s, has Down Syndrome and lives with her.

“It’s just a huge financial relief off Joyce’s shoulders because furnaces are not cheap; and it’s not just the furnace, it’s the installation, it’s everything,” Anderson said. “Those guys and gals that work there, they’re just amazing. They refuse to take a handshake. It has to be a hug. It’s a complete family-owned business.”

“This is just in time for Christmas and I think that furnace wouldn’t last another year… In my eyes it was a true Christmas miracle,” Anderson said with a laugh. “This Christmas is going to be pretty hard to top.”

Circle Plumbing and Heating is based out of Anchorage, located at 2317 Raspberry Road. It’s owned and operated by the Embley family. Lee Embley and his wife Thelma started the company in 1971, according to service manager Michael DuPree.

“One of the things that Circle loves to do is give back… It’s something they love doing,” DuPree said. “It’s just a tradition and we wanted to continue doing it.”

DuPree said he’s worked with Embleys for over 7 years and been a family friend for 30-plus years. He said they’ve been doing this holiday giveaway for eight years and created it in memory of Lee.

“Christmas was his favorite time of the year,” DuPree said. “He loved it.”

DuPree said the annual giveaway has really taken off and they receive a hefty amount of nominations each year.

People either nominating their own household or someone else’s share their stories and how much the assistance would mean to them. Circle employees widdle down the entries to a top five and select a winner from there.

“It’s one of those things that you wish you could do so much more but it’s one thing that makes a big impact, not just for the family who wins it but all their friends and family,” DuPree said. “It’s encouraging. If your family won something, you’d be encouraged.”

DuPree said they were able to give away two furnaces over a season on two occasions. He said all the employees participate in the process each year.

“We’re actually part of the process so it brings all our Circle employees together, too,” DuPree said.They talk to customers all year long about this. So, it makes it pretty special to us as employees,”

As for Semonin, both Anderson and DuPree witnessed her reaction and said that she was speechless when she found out.

“She was shocked. She like, couldn’t even speak,” Anderson said with a laugh.

Anderson said the furnace went to a very deserving person. She said Semonin always takes life with a smile, for every up and every down. No matter what trial she’s facing, Semonin takes it with a smile.

“She is the sweetest person you’ll ever meet,” Anderson said.