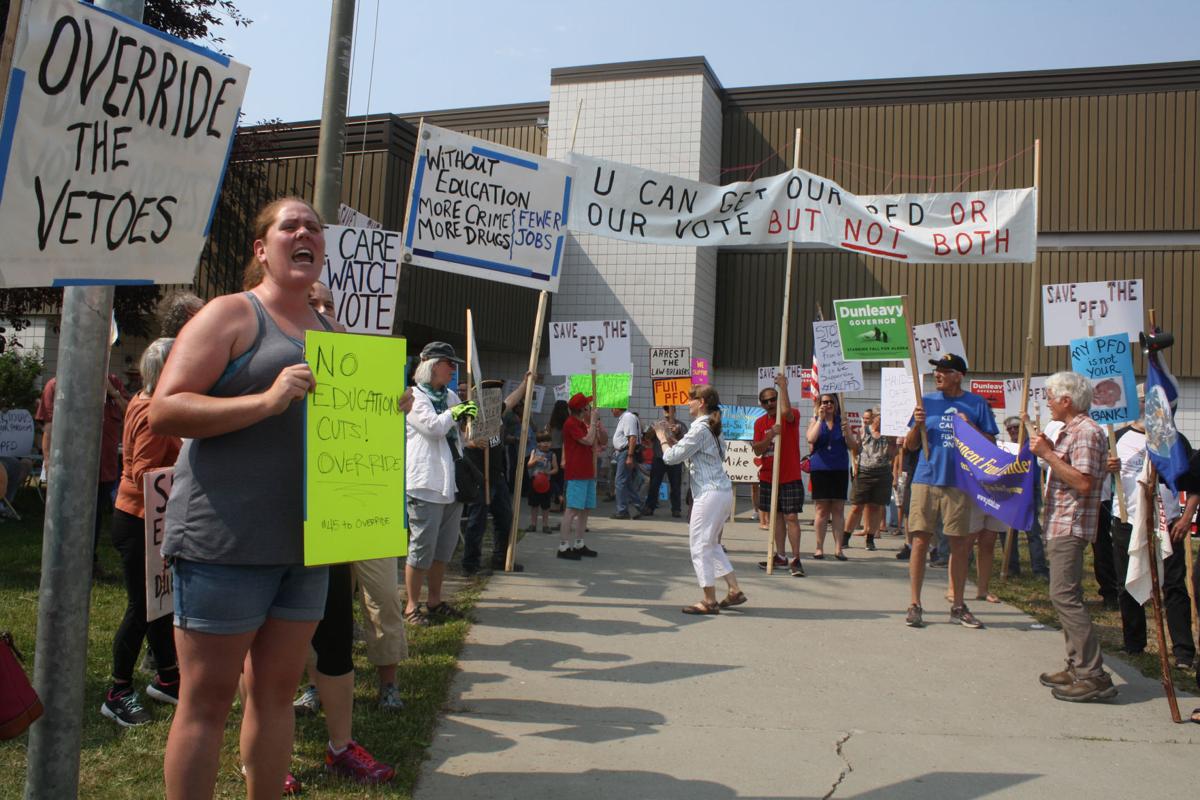 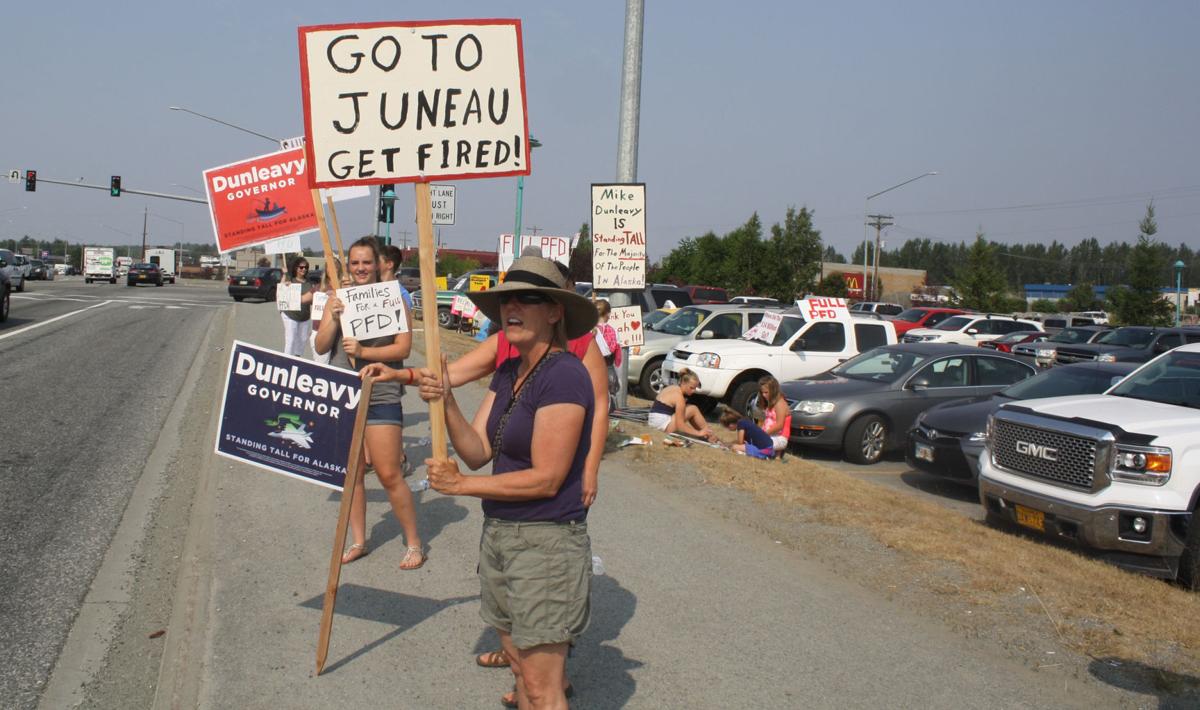 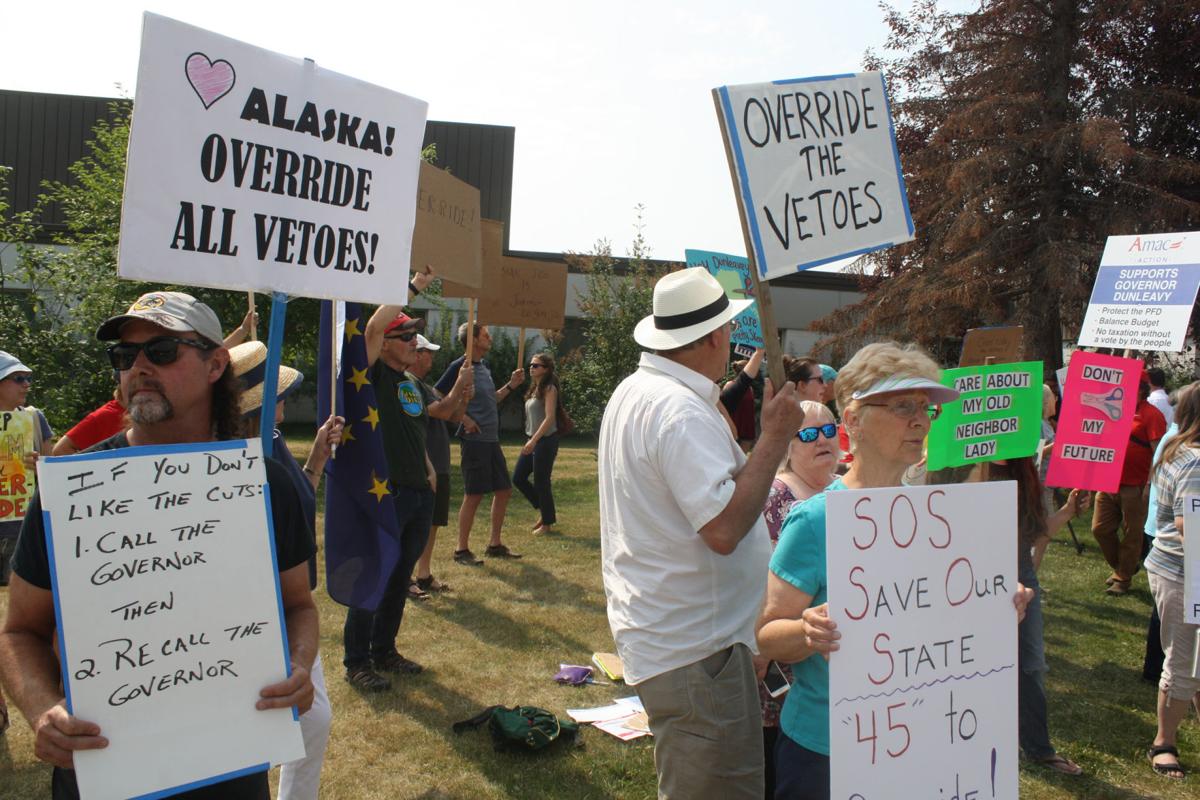 WASILLA — Gov. Mike Dunleavy’s special session with Alaska Republican legislatures at Wasilla Middle School Monday drew in waves of supporters and protesters to his recent budget vetoes that would cut hundreds of millions of dollars across the state, potentially affecting programs like the University of Alaska, Medicaid, early education and senior cash payments.

As forces from both sides rallied their numbers in the hours leading to the special session, Larisa Fonov stood near the Crusey Street and Parks Highway intersection by Newcomb Park and Wasilla Lake alongside numerous other Dunleavy supporters. They all waved to traffic holding signs that said things like “save the PFD” and “we support the veto” and “lawmakers or lawbreakers?”

“I know Dunleavy has a good plan… We voted him in didn’t we?” Fonov said.

Fonov said that she’s followed Dunleavy’s various meetings and sessions. She said that so far, the governor has been keeping his word on his promises, “staying on track.”

“Budget cuts happen. They need to happen... If we were promised full PFD’s we need to get full PFD’s,” Fonov said.

Some people were livestreaming, shouting their beliefs and calls to action into to their phones. One Dunleavy supporter even brought a megaphone and a Gadsden flag.

Like Fonov, Melody McCullough said that she was there to support Dunleavy’s cuts and to advocate for the “full PFD.” She said as a grandparent, the PFD means winter clothes, school clothes and school supplies for her grandkids. She said it also means tires on her car and help with her heating and electric bills.

“My husband works in one of the natural resources that Alaska has to offer seven months out of the year. He’s home five months. The PFD helps us get through the winter time,” McCullough said.

McCullough said that the PFD has “nothing to do with the budget.”

“It was set aside by Alaskans for Alaskans. It is not meant to be used for governmental purposes. I think we need to enshrine it. I’m tired of getting ripped off every year. I’ve had to cut my budget every year. When am I gonna see the government cut theirs?” McCullough said.

McCullough said that she supported the cuts 100 percent, saying that Dunleavy was getting rid of the “fat” and “waste.”

“You know, honestly, senior services is the one thing that it really doesn’t bother me that much. Because, if we get a full PFD, these people are talking about being cut at the maximum $250 a month. Well, if you take $250 a month and you times that by 12, it equals $3,000. Hmm, a full PFD,” McCullough said.

As 1 p.m. neared, the Dunleavy supporters marched up Crusey Street to Wasilla Middle School, finding a hodgepodge of opposition and support. People lined up on both sides of the walkway leading to the main entrance. Instead of having a clear boundary for left and right ideals on either side, the crowd formed pockets of likeminded protestors and supporters.

The crowd of supporters and protesters produced a gargled din of chants. Circling around the crowd, one would hear the assorted chants for each side as they made their way around- hearing chants like “Follow the law!” “Alaska Pride, override!” and “Save the PFD!”

There were protestors holding signs like “override the vetoes” and “without education more crime more drugs fewer jobs” and “what would Ted do? Override!”

Tina Tomsen held the “what would Ted do? Override!” sign, referring to the Former United States Senator who died in 2010 during an airplane crash.

Tomsen said that it was interesting to notice how the crowd seemed to split into two camps: a full PFD and overriding the vetoes.

“It’s not one or the other. Nobody’s addressing the oil tax credits, which would more than pay for Dunleavy’s vetoes,” Tomsen said.

“Not just the most vulnerable, but the thinkers in our state. The university cuts, the Medicaid cuts, we could really decimate the services and human infrastructure that we have in our state,” Tomsen said.

Dianne Woodruff was there to protest Dunleavy’s vetoes. She said that not all seniors qualify for the PFD and the taxable source of income could affect their other benefits like housing and food stamps. She said that Dunleavy’s solutions to the state budget are more short term without seeing the bigger picture.

“Someone read Ayn Rand and thought that was the gospel. If you want people to not be takers, then help them be makers. You know, people got through the book and thought it was a gospel and not a work of fiction. It’s a pondering piece. Maybe they should spend a little more time with ‘1984’ and ‘Fareihnheight 451.’ I mean, think about ‘Animal Farm.’ Let’s think about those things as well; and then try to put it all in perspective,” Woodruff said.

Woodruff fondly recalled the bipartisan political movement called Coffee Party USA. It was created in 2010 as a response to the radical right wing Tea Party and it evolved to having members across the political spectrum. She said that it didn’t seem to gain much traction but left an impression of unity beyond political lines.

“That’s basically the concept we need to get back to. Let’s get together as a community and let’s talk about the realities that people are facing. Let’s figure out what we think is important and then let’s seriously talk about how we’re going to solve those things; instead of just shouting at each other,” Woodruff said.

Make the cuts. Without doing this, Alaska will be officially broke by next year or so. The Legislature has been kicking the can and ignoring the major issues which have been coming down that road for a long time. Well, time has now run out and the Governor has taken responsibility and has the balls to actually make the hard decisions. No one else has done so and has caved to peer pressure and of course the whining of the public. The public has gotten used to all the free-bees where everything has been paid for by government. When you are dependent on the government for everything, that is called socialism. This year and next will be very hard, but without these cuts, it will be more devastating when Alaska goes completely broken and more if not most programs dry up. All people need to learn to live within their means and not expect others to pay for everything they need or want. This lesson is now on the table. This has gone way overboard in how much the feds and the state dole out for all of the free-bees. Enough is enough... time for the major cuts. Support the cuts and do for yourself. Tired of Alaska being a welfare state when people could be responsible for their own lives.