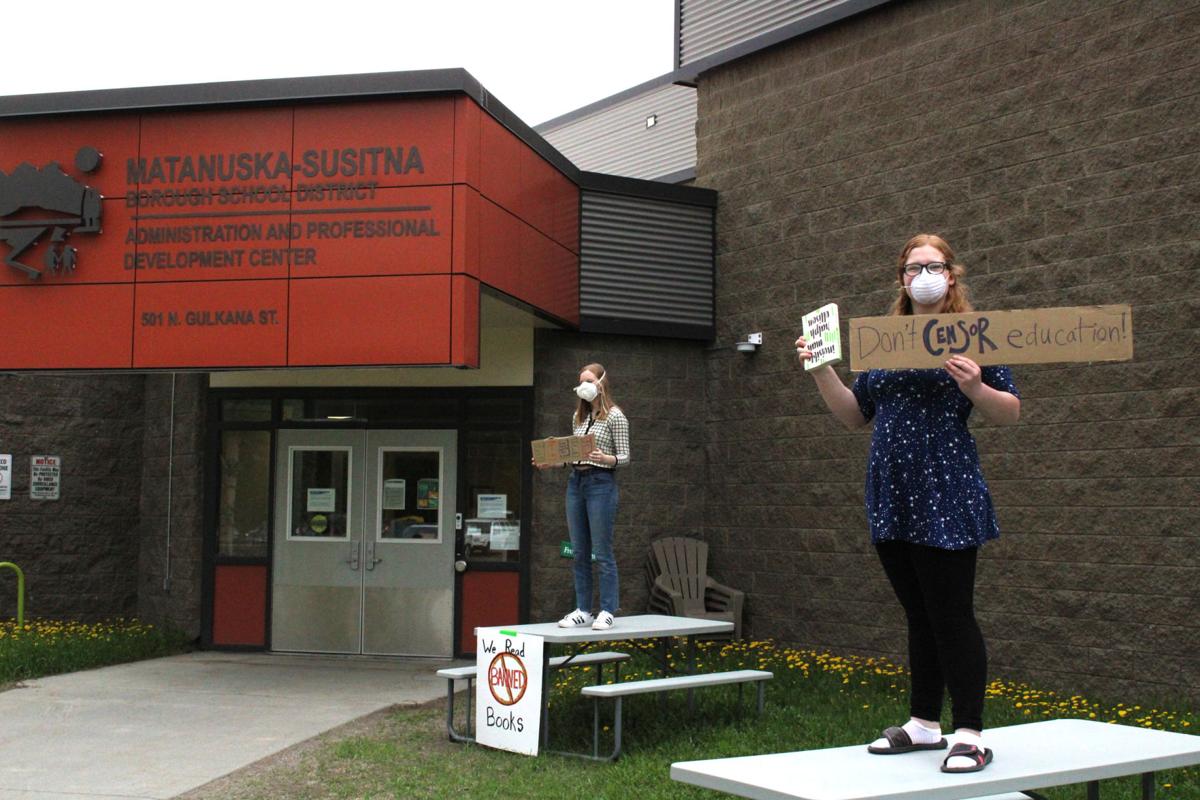 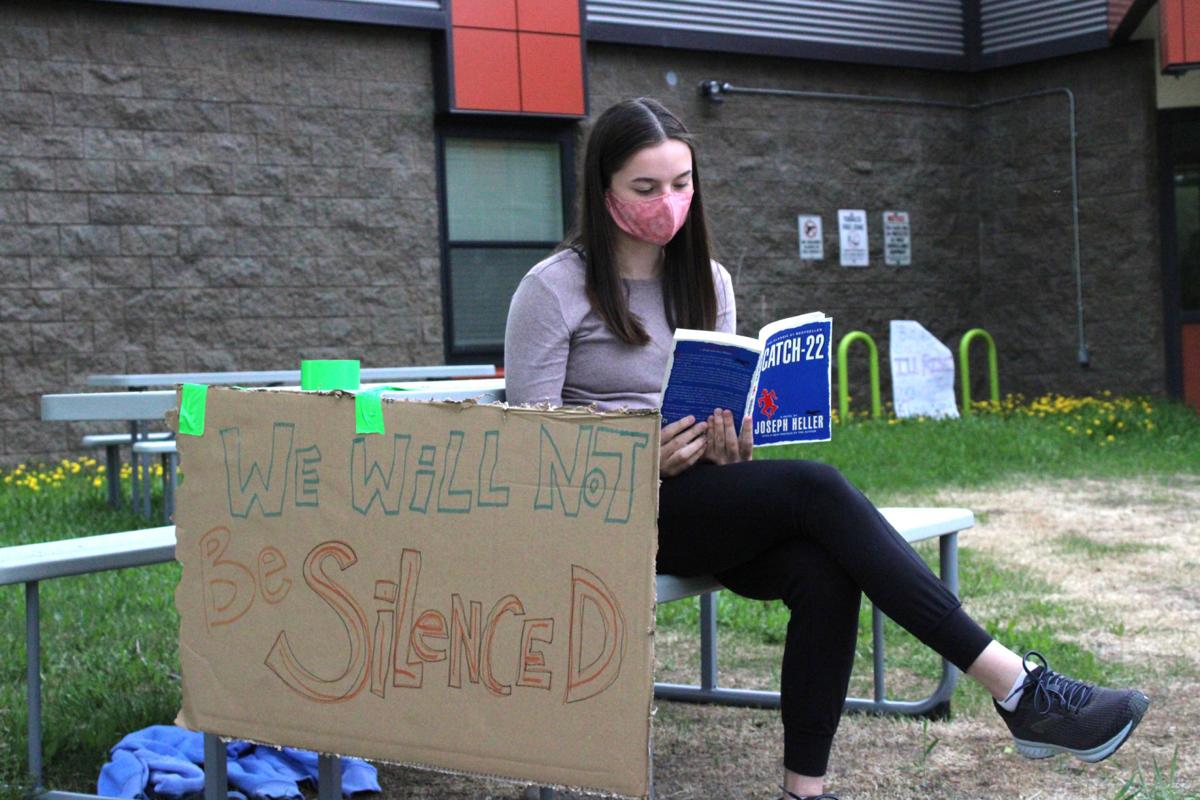 Zoe Patton-Meyer, a Palmer High School student, reads "Catch-22" Wednesday prior to the Mat-Su School District meeting. The agenda at Wednesday's meeting included a vote to rescind a vote to remove five books from the district's English curriculum. The list iincludes "Catch-22". 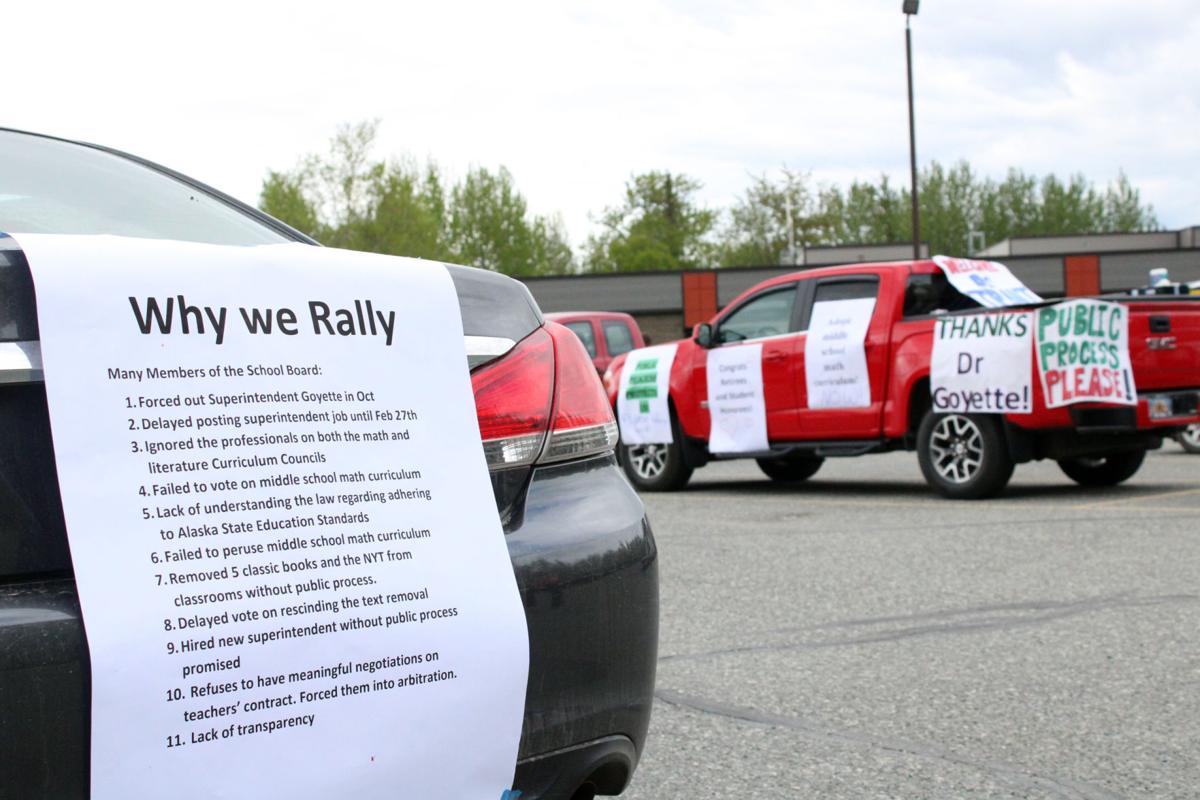 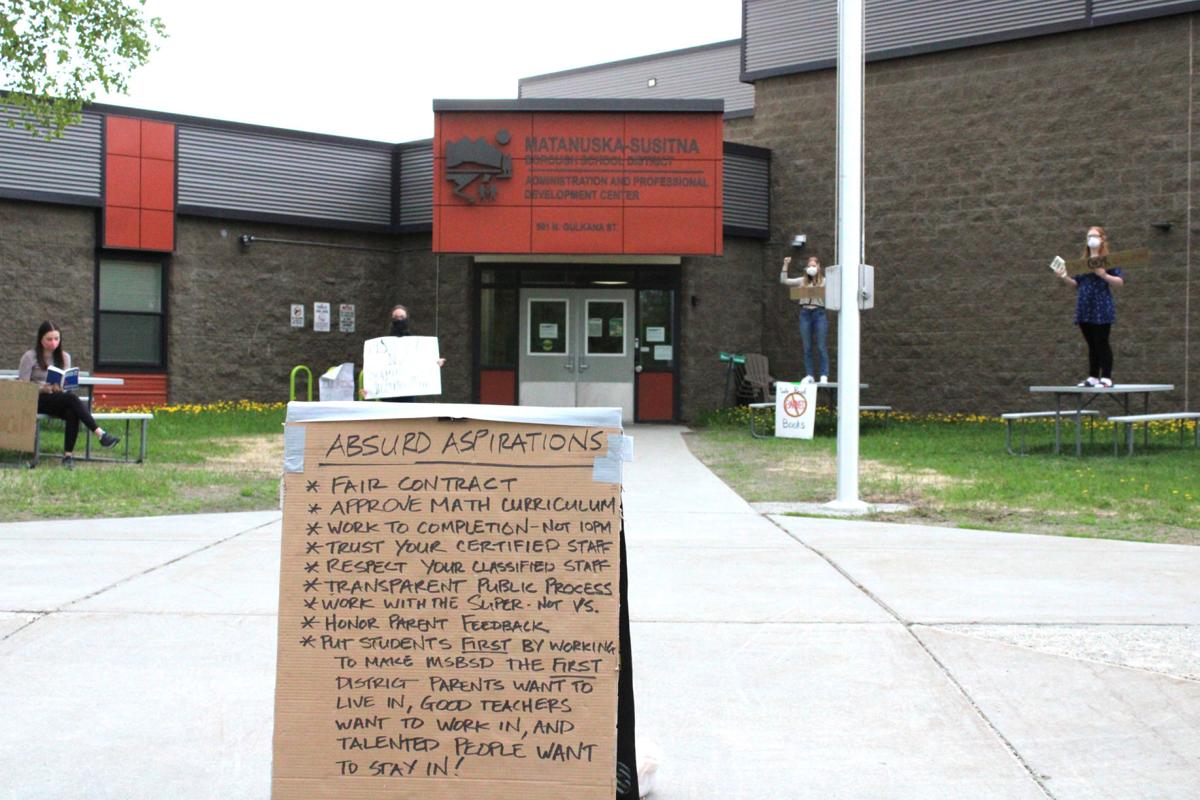 Zoe Patton-Meyer, a Palmer High School student, reads "Catch-22" Wednesday prior to the Mat-Su School District meeting. The agenda at Wednesday's meeting included a vote to rescind a vote to remove five books from the district's English curriculum. The list iincludes "Catch-22".

PALMER — The removal of five books and the New York Times Learning Network by the Mat-Su Borough School District School Board has prompted unprecedented community involvement in recent School Board meetings.

“The Things They Carried” by Tim O’Brien, “I Know Why the Caged Bird Sings” by Maya Angelou, “Catch-22” by Joseph Heller, “Invisible Man” by Ralph Ellison and “The Great Gatsby by F. Scott Fitzgerald were removed from MSBSD high school English elective curriculum after an amendment passed 5-2 at the April 22 meeting of the school board. At the May 6 meeting of the school board, 58 members of the public offered their comments on the curriculum change, with 48 of those comments opposing the action and asking for a motion to rescind. On Wednesday as the board prepared to take up the curriculum a third time in less than a month, members of the public offered words and actions to the school board to express their support for the books.

“I hope they can realize that this was a mistake,” said Gloria Shomer. “We’re not going to be silenced even though something like this is happening.”

Shomer is an incoming junior at Mat-Su Career and Technical High School and stood at the entrance to the MSBSD office building prior to the start of the school board meeting at 6 p.m., on Wednesday. Shomer was joined by Palmer High School students Annika Gagnon and Zoë Patton-Meyer as they read books that were removed from curriculum by the school board at the entrance. The gauntlet of students reading removed books at the district office doors was just part of a physical protest despite the fact that no members of the public were allowed in the school board chambers during the meeting.

“Since we’re not able to show up in person to the meeting because of a social distancing, right, this new reality that we’re all a part of, we did the next best thing and we got creative in this parking lot protest. So we did reach out to the union of course because they’re very organized but in that sense this is a community led effort and there are many people here like myself who are not employees of the district. I’m not even a parent right, I’m just a concerned citizen. Banning literature is just so closed minded,” said Denile Ault.

“I hope that they decide to start following the public process which they have failed to do in hiring the superintendent, they failed to do on banning the books and they failed on the math curriculum for middle school. They should’ve already adopted that by now and they chose now and so I’m hoping they decide to follow that process. Do I expect them too, I have given up trying to figure out what this board will do,” said Shibe.

Once the meeting began, members of the public were permitted one hour, per the meeting rules, to address items not on the agenda. Members of the public chose four topics to focus on, chastising the school board for the lack of vote on middle school math curriculum, book removal, a lack of contract with teachers since the start of last school year and the lack of public input during the superintendent hire process. Palmer City Councilwoman and business owner Dr. Jill Valerius was curious why no in-person testimony was allowed at the school board meetings when technical difficulties had been so prevalent since the shift to telephonic testimony.

“I feel like there was a lack of board process initially with regards to the removal of select books from the upper level English literature elective after it had gone through a thorough approval process, disheartening that it took public outrage for you to respond and reconsider. The fact that you as a board chose to end the last meeting rather than consider the testimony or respond appropriately, I feel like that was an expression of disrespect and a dereliction of your duty,” said Valerius. “While I’m glad that we do have a superintendent hired, I’m a bit disappointed by the lack of transparency with regards to hiring the superintendent.”

While public comment on non-agenda items is limited to two half-hour sections per meeting, nine members of the public chose to speak to the board. Nearly all of the members of the public who spoke expressed their disapproval of the superintendent hire process, math curriculum, English curriculum, or teacher contract, and in many cases all four. Jamin Burton chose to use as many numbers as he could fit into his three-minute long testimony.

“The teachers in our district have gone 89 percent of a calendar year without a contract while picking up 100 percent of the increases to health care. Mat-Su teachers and the school district have been lauded for their response to COVID-19 in the media, but there seems to be little to no respect for the teachers and the staff actually doing the work from the school board. Meanwhile, other media have poked fun at, ridiculed and lambasted our school district for removing approximately 30 percent of literature materials for our high school elective English curriculum while providing zero alternative materials,” said Burton. “I would like to plead with the board, do your homework, get your job done, find a way to be productive, it should not be absurd aspirationally to work with a fair contract, a quality curriculum and a board that adheres to a public process and does their jobs.”

Ault was one of the nine members of the public who chose to call in. At the April 22 meeting, Board Member Jim Hart said that reading sections of the removed books in public would result in an Equal Employment Opportunity complaint and could result in sanctions against the person reading the material aloud. Ault chose to do just that during persons to be heard on non-agenda items, reading an excerpt from Maya Angelou’s “I Know Why the Caged Bird Sings” from page 271.

“To be left alone on the tightrope of youthful unknowing is to experience the excruciating beauty of full freedom and the threat of eternal indecision. Few, if any, survive their teens. Most surrender to the vague but murderous pressure of adult conformity. It becomes easier to die and avoid conflicts than to maintain a constant battle with the superior forces of maturity.

Until recently, each generation found it more expedient to plead guilty to the charge of being young and ignorant, easier to take the punishment meted out by the older generation (which had itself confessed to the same crime short years before). The command to grow up at once was more bearable than the faceless horror of wavering purpose, which was youth. The bright hours when the young rebelled against the descending sun had to give way to twenty-four -hour periods called “days” that were named as well as numbered.

The black female is assaulted in her tender years by all those common forces of nature at the same time that she is caught in the tripartite crossfire of masculine prejudice, white illogical hate and Black lack of power.

The fact that the adult American Negro female emerges a formidable character is often met with amazement, distaste and even belligerence. It is seldom accepted as an inevitable outcome of the struggle won by survivors and deserves respect if not enthusiastic acceptance.”