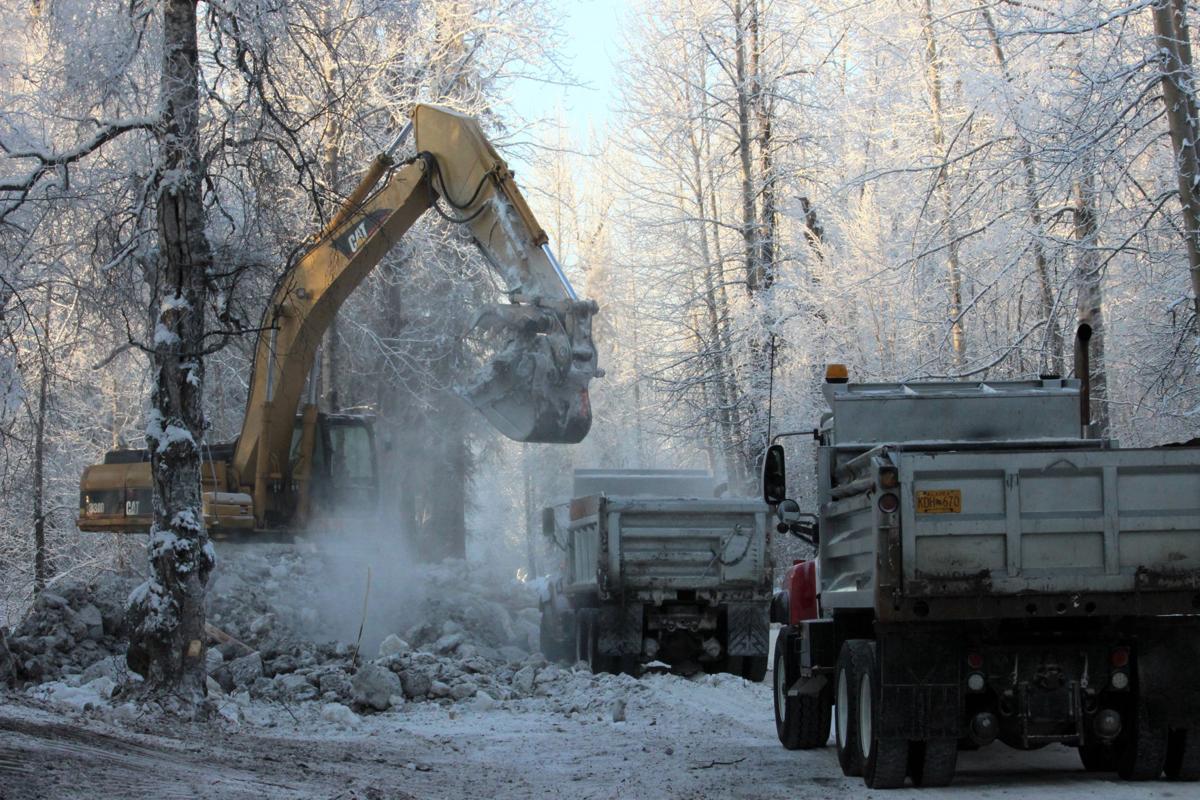 Contractors work to move ice in the Willow Creek area. 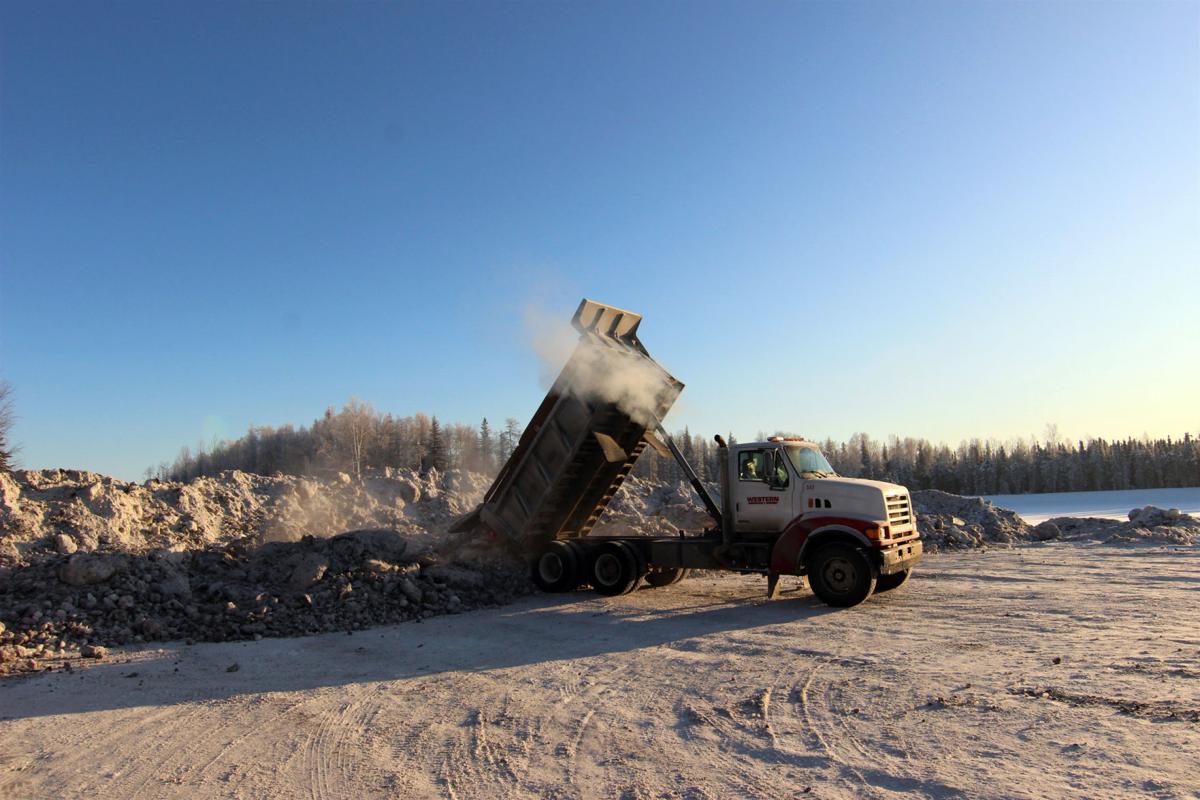 A truck dumps a load of ice as contractos work to combat a flood in the Willow Creek area.

Contractors work to move ice in the Willow Creek area.

A truck dumps a load of ice as contractos work to combat a flood in the Willow Creek area.

WILLOW — As contractors hired by the Mat-Su Borough near completion of their reclamation project of Deneki Road, a new threat arises on the other side of the Valley.

On Wednesday, the residents on Deneki Road were somewhat back to normal. Sled dogs howled to their owner, ptarmigans blended in with the snow and the faint sound of trickling water could be heard on Deneki Bridge. The Dec. 21 flooding of Willow Creek at Deneki Bridge had resulted in the declaration of a disaster by the Mat-Su Borough Mayor Vern Halter and Manager John Moosey. The declaration of disaster was extended to Jan. 21 and according to Road Maintenance Superintendent Mike Lachelt, the work to clear the rest of the ice off the roadway could be completed by the end of this week.

With residents on Deneki Road cut off from Willow-Fishhook Road, water rescue teams had to residents, animals and supplies back and forth to safety before Moosey signed a Letter of Entry, allowing the borough to hire Western Construction as its contractors to place an excavator on the river ice and punch a channel through to return water flow to the river rather than through residents properties. As of Wednesday, the harrowing remains of the damaging flood linger. As long as the cold temperatures remain below 32 degrees fahrenheit, three or more feet of ice will line Deneki Road and many of the properties along it.

“The coldest temperatures we had was -35 and we had a long long spell of 30 below. It was getting old,” said Lachelt. “We had to open this multiple times and clean it out multiple times in the sub 30 below to build this channel and the dam was heavy under right here, concentrated by the bridge and the ice was grounded…so no water was going to get by it, so we worked real hard to try and break loose and get a channel moving underneath this.”

As ice remained frozen to the banks of Willow Creek, the moving flow of water found the path of least resistance and lowest ground on which to travel, a property adjacent to the bridge at the intersection of Michelle Drive and Deneki Road. A large u-shape has been carved into the three feet of ice that coat the entire property to allow a car to park in the driveway.

As the flood put Deneki Road completely under water, borough operations and maintenance crews were able to assist in attacking some of the ice and shuttle residents in and out for supplies. A hydrologist was hired to assess the damage and Western Construction was hired as the contractors to help begin removing ice last Wednesday. Access for residents went from no access to argo access only to 4x4 vehicle access along the ice road that still required crossing over running water to last week when most any vehicle was able to travel over the ice road. Western is rotating four dump trucks that are making laps across Willow-Fishhook road to take loads of 10 cubic yards cut out by three excavators operating along the roadway, removing ice along the 30-foot easement at an estimated five tons per truckload. A sea of ice sits across Willow-Fishhook load in an empty lot where it has been dumped by trucks. Nearly a football field long and nearly 100 feet wide, Lachelt has had to monitor the temperature closely. Any melt that refreezes could cause more problems. While residents now have access to their property, not all have been pleased with the work of the borough in response to the flood.

“I enjoy helping people and stuff like this. I’m in charge of road improvements, [Capital Improvement Projects] lists and budgets. When you go out and actually improve the road and people like it, that’s good. Sometimes you never can do anything right,” said Lachelt. “Everybody was up against it in the middle of the night. They came out, so from now on they might carry a roll of that caution tape with them or something. They’re out there in the water past their waist getting people out in frozen ice water in their suits. My hat was off to those guys.”

Lachelt has worked for the borough for 20 years, 17 of those as the Road Maintenance Supervisor for five Road Service Areas from Big Lake north to Trapper Creek. Lachelt says he was told that Road Maintenance Supervisors rarely last more than five years and must develop thick skin to deal with the critical nature of their performance. As Deneki Road turns into Michelle Drive and Kenny Boulevard in Willow, the Shirley Towne Drive bridge sits idle, incomplete and condemned from damage during 2012 floods.

“This is the worst for wintertime and we had other events in 2006 and 2012, for sure some lesser events with topping over the road that were much less impactful,” said Lachelt.

The borough assembly has made the Shirley Towne Bridge their number one priority for the RSA, hoping to complete a quick repair and complete replacement this year. While the Borough awaits an estimate to fix the Shirley Towne Drive bridge which could provide a secondary egress for residents, massive piles of ice stand along Willow Creek. The same Willow Creek ice eerily sits along Deneki Road, waiting to be removed by Wester. Excavators. While the declaration of disaster ends on Jan. 21, a rapid change in temperature high or low could drastically change the flow of water in Willow Creek and resurface past problems of ice jams and flooded streets.