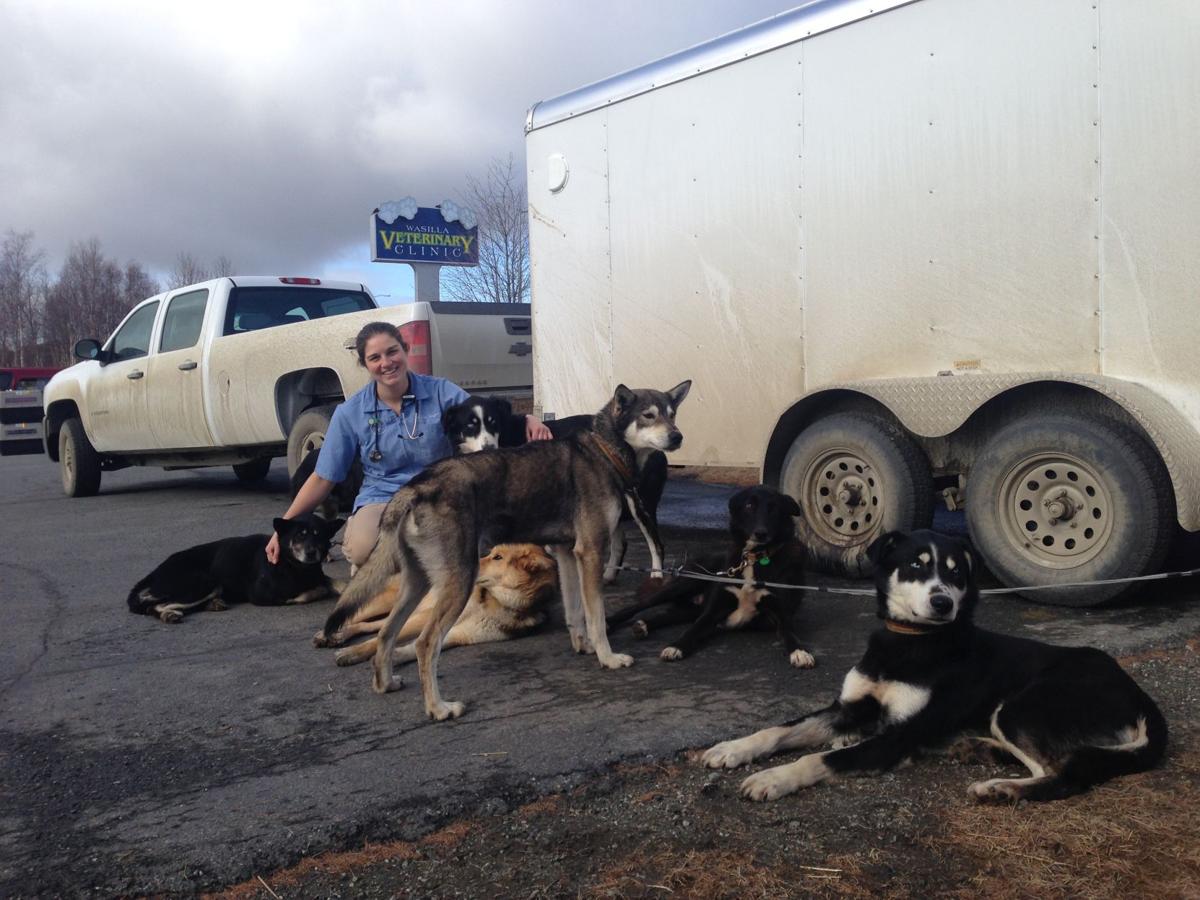 Dr. Julie Stafford smiles for a photo with some sled dogs outside Wasilla Veterinary Clinic, where she’s worked since January. Stafford has been recognized as the winner of the 2016 Next Generation Award, presented by the World Small Animal Veterinary Association (WSAVA) and Hill’s Pet Nutrition in Colombia last month. 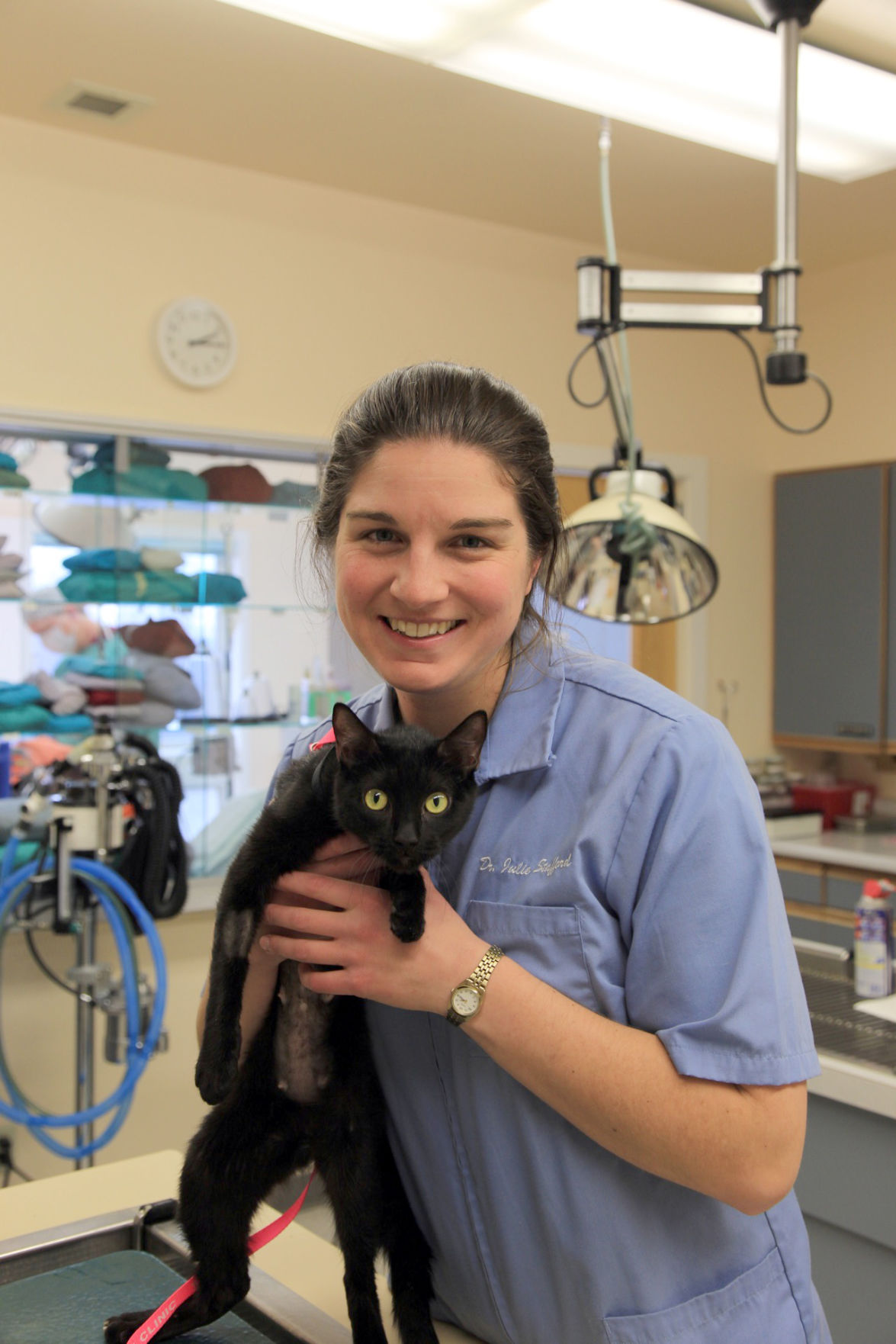 Dr. Julie Stafford smiles for a photo with some sled dogs outside Wasilla Veterinary Clinic, where she’s worked since January. Stafford has been recognized as the winner of the 2016 Next Generation Award, presented by the World Small Animal Veterinary Association (WSAVA) and Hill’s Pet Nutrition in Colombia last month.

WASILLA — The young Wasilla veterinarian Dr. Julie Stafford has been globally recognized for her work with animals, but her work with and understanding of people is perhaps what sets her apart.

Born and raised in Anchorage and a graduate of Colorado and Oregon State Universities, Stafford said she has worked at Wasilla Veterinary Clinic since January. Last month, she received the 2016 Next Generation Award from The World Small Animal Veterinary Association (WSAVA) and Hill’s Pet Nutrition, and traveled to Cartagena, Colombia for the WSAVA World Congress.

During the four-day conference — which Stafford extended to a much-needed 2-week vacation, she said — she delivered a lecture titled, “Veterinary Wellness: Addressing burnout, depression and suicide in the veterinary profession.”

“It’s been a topic of interest of mine for a couple of years,” Stafford said by phone after a long work day last week.

Part of the reason she got the Next Generation Award, she guessed, was because of her participation in a year-long program with the American Veterinary Medical Association (AVMA), during which she studied “threats to the veterinary profession” and promoted the wellness and self-care of veterinarians.

“It’s a little-known fact but we actually have four times the national rate of suicide … as the general population,” Stafford said, and twice that of other health care professionals. One in six veterinarians, she said, contemplate suicide at some point during their careers.

When asked why this might be, she said it probably has something to do with rate of patient death.

“Other doctors don’t experience death quite at the rate that we do,” Stafford said. “We have to euthanize patients … and a patient might not be presented to us until they’re in incredible pain or, you know, dire straits.”

There’s also the added emotions of the client — the person responsible for the animal, and payment for services — and the mutual grieving process that can wear a veterinarian down.

Unsure if vet clinics in other countries experienced the same issues, Stafford said she was a little nervous to present to the World Congress last month. Afterward, though, she said “a depressing number” of people, “from Myanmar to Mexico,” came up to her, affirming burnout, depression and suicide as global problems among vets.

These are the things, Stafford said, that students should be aware of as they pursue careers in veterinary science, but they’re not necessarily reasons not to become a vet.

“It’s a wonderful occupation and it can be so rewarding, but it also can be very stressful,” she said. “It isn’t just puppies and kittens all day like a lot of people think.”

“But if, knowing that, you decide this really is what you want, don’t give up,” she added.

Stafford said she’s one of the “stereotypical” vets that had wanted to work with animals since she was a little girl, but in high school and college discovered that she “really loved medicine and biology.”

Now, there’s nothing she’d rather do than help people care for their “fur babies,” she said.

“Knowing that ... both of you as a team are working to provide a pet with the highest-quality, long, happy life — that’s really my favorite part,” she said.

Dr. Julie Stafford is a busy woman, but encouraged people to stop by the clinic — located at 2750 E. Parks Hwy. next to the Alaskan View Motel — and say hello.