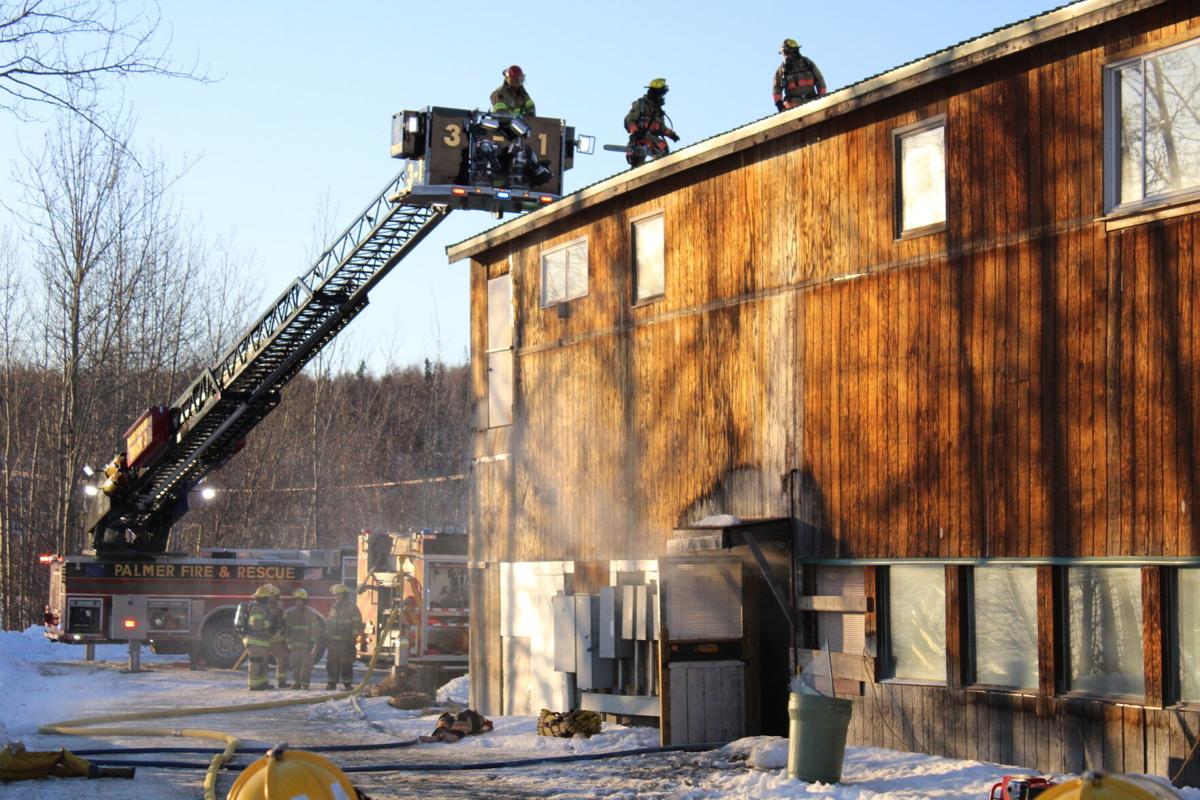 Dozens of on-call responder firefighters from the Butte Fire Department, Sutton Fire Department and Palmer Fire and Rescue descended upon the iconic green building on the Old Glenn Highway near the Matanuska Bridge that formerly housed a restaurant decades ago. 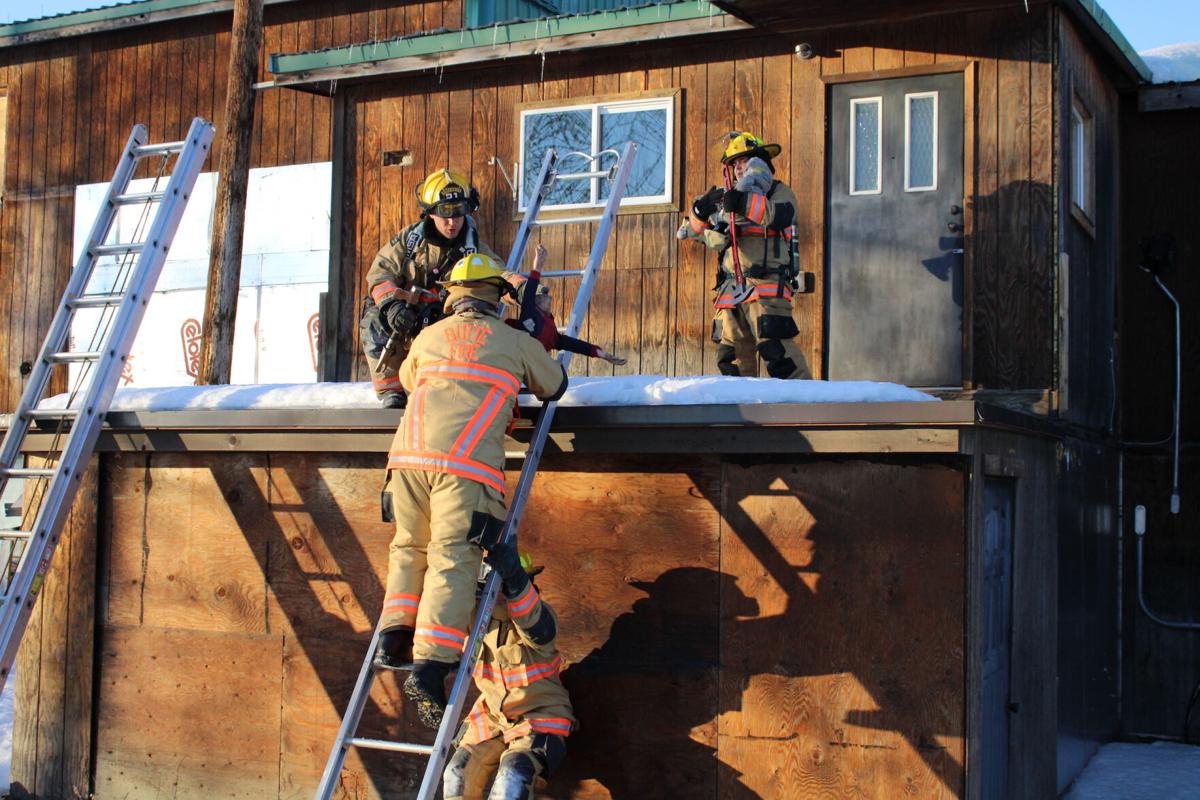 The building used for training on Monday night is set to be demolished as it currently sits in a dangerous area for flooding and has not been used commercially in decades.

Dozens of on-call responder firefighters from the Butte Fire Department, Sutton Fire Department and Palmer Fire and Rescue descended upon the iconic green building on the Old Glenn Highway near the Matanuska Bridge that formerly housed a restaurant decades ago.

The building used for training on Monday night is set to be demolished as it currently sits in a dangerous area for flooding and has not been used commercially in decades.

PALMER — Dozens of on-call responder firefighters from the Butte Fire Department, Sutton Fire Department and Palmer Fire and Rescue descended upon the iconic green building on the Old Glenn Highway near the Matanuska Bridge that formerly housed a restaurant decades ago.

The gathering of three local fire departments was a training exercise that came about as a unique opportunity to train in structure fires for the local departments.

“We have four different scenario fires inside the building that they have to locate and extinguish as well as mannequins that are simulating victims inside the building and around the building,” said Butte Fire Chief Michael Shipton. “Being able to go into a building that we typically don’t get a chance to go in, it changes up the way we think as we move through the building and actually increases our abilities to understand for safety and to be cautious as were moving through things that we typically don’t see on an everyday basis.”

The building used for training on Monday night is set to be demolished as it currently sits in a dangerous area for flooding and has not been used commercially in decades. Throughout the month of March, Butte, Sutton and Palmer Fire have been training on various skills and scenarios vital to their safety and ensuring the safety of Mat-Su residents should they have to respond to a fire. The iconic green building that has not housed a business for decades provided an opportunity for the local firefighters to train in combating a fully involved structure fire, a luxury not available currently at the Mat-Su Borough fire training facilities on Knik-Goose Bay Road in Wasilla. After the initial response and entry, firefighters had to simulate locating people in need of rescue as well as set up a portable tank and relay water from one vehicle to the firefighters on the ground.

“It’s a great opportunity especially for on-call responders coming out here. That’s one of our challenges is understanding that as on-call responders, we don’t always have the personnel that full time departments have or career departments have and being able to adapt to what we have based off the situation and who we have responding and knowing that our next unit may be a little while out, it could be 20 or 30 minutes, that we have to adapt to what we have ahead of us,” said Shipton. “Firefighters will be able to continue to do their job and this is part of that readiness and response to ensure that each department no matter where we’re at, mutual aid or an individual fire department, that we’re consistently ready to respond to the community’s needs.”

As nearly a dozen fire vehicles arrived onsite causing a brief delay in traffic on the Old Glenn Highway, firefighters trained in ladder drills, water shuttles, and search and rescue techniques during the simulated fire that included an artificial smoke machine. Shipton led in coordination of the training that included Ventilate, Enter, Isolate, and Search (VEIS) drills as well. The Mat-Su Borough Planning Department notified MSB Deputy Fire Director Brian Davis of the impending demolition of the building and the process was underway to plan a training exercise for dozens of local firefighters. Davis said that on any given structure fire, multiple fire departments will likely respond as a result of the mutual aid agreements between local fire departments.

“Here’s a building that they haven’t been in before that they’re not familiar with the layout, so when they get into the smoke they’re going to get disoriented and have some unique challenges that they don’t get in just our routine training facility,” said Davis. “We’ve been a largely residential community here in the Valley. Now we’re getting more commercial development so it’s now becoming emphasized as a part of our training is adapting to what’s being built in the community which is more and more of these commercial buildings.”

“If we actually look at statistics since the early 1990’s to now, the on-call responders, just firefighters in general or anybody in public service, we’ve dropped over 50 percent of what we’ve had before and it’s relatively easy to actually look at the Mat-Su Borough website itself. You can apply online,” said Shipton.

Following the initial response to the simulated structure fire, groups gathered to review what actions they took and receive constructive criticism from their fire chiefs on how to work more effectively.