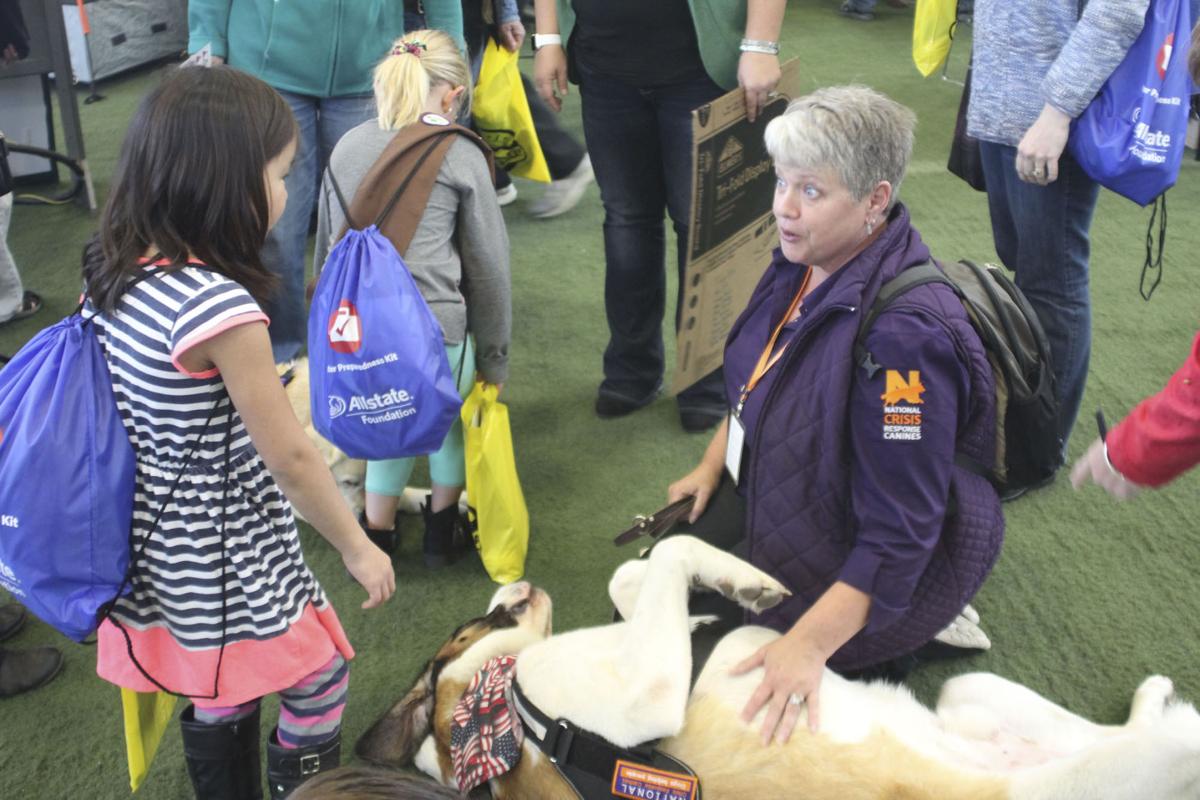 Some of the members of the National Crisis Response Canines were hard at work at Saturday’s annual Mat-Su Emergency Preparedness Expo at the Menard Center in Wasilla. 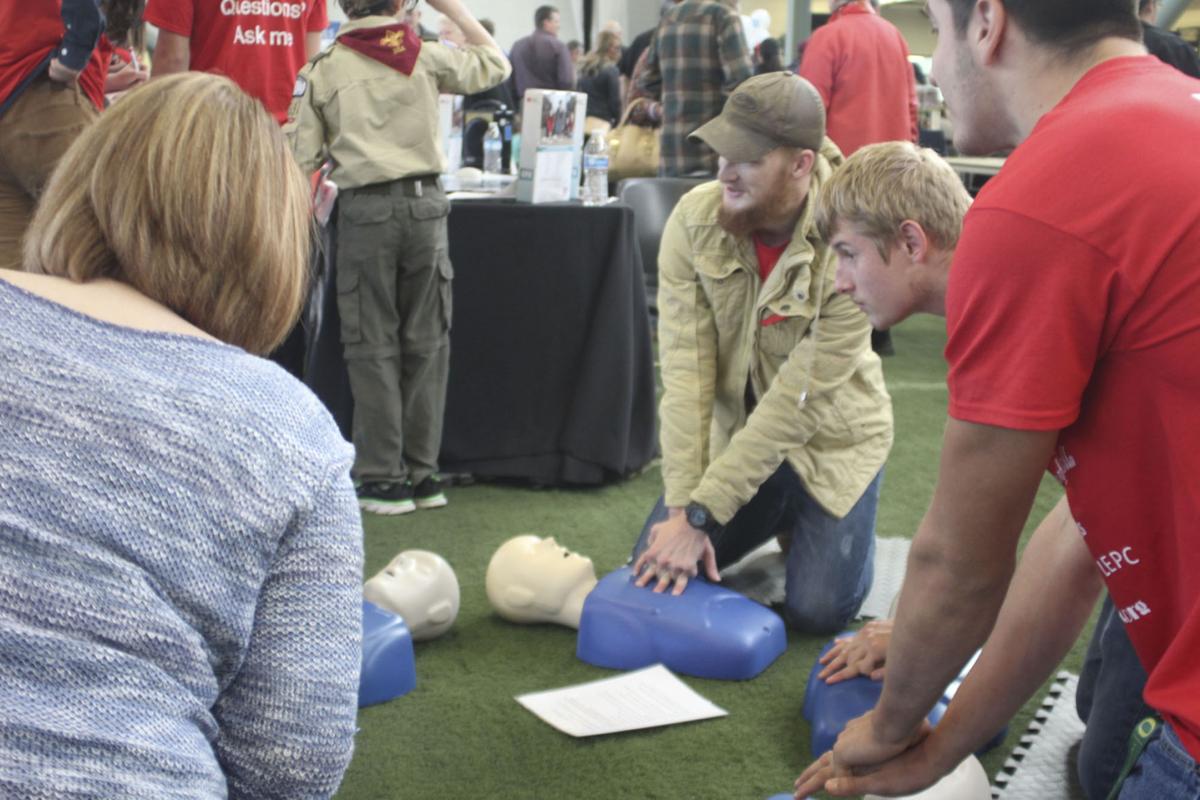 Some of the members of the National Crisis Response Canines were hard at work at Saturday’s annual Mat-Su Emergency Preparedness Expo at the Menard Center in Wasilla.

WASILLA — The annual Mat-Su Emergency Preparedness Expo saw more than 1,200 people through the doors of the Menard Sports Center Saturday. The event was a chance for families to prepare for disasters and emergencies. About 70 businesses and organizations participated with booths, live presentations, workshops and demonstrations, covering topics like first aid, cardiopulmonary resuscitation (CPR), boat safety, smoke alarms and fire escape plans.

Many people went in a circle, visiting various vendors and gathering materials to make an emergency kit. There were also some appearances by emergency service dogs like Mat-Su Search and Rescue (MATSAR) and National Crisis Response Canines (NCRC). A LifeMed helicopter made special landing in the parking lot. The event was essentially a “one-stop-shop” for emergency preparation.

According to event coordinator and Mat-Su Borough Emergency Management Specialist Heather Ridge, the event began nine years ago and was formerly held at Mat-Su College. She said the event gets bigger every year and eventually outgrew the college and moved to the Menard Sports Center.

According to Ridge, the 2017 event was the best by far. Ridge handed out feedback forms for all of the vendors. She said they had an overwhelming positive response.

“They said it was the best expo they’ve ever been to,” Ridge said.

This year’s expo broke new ground, with its first-ever flash mob performance. A bulk of the event’s volunteers were youth from various places including Junior Reserve Officer Training Corps (JROTC), Boy Scouts of America, Primal Martial Arts and the Wasilla High School cheerleaders. In the middle of the event, the cheerleaders broke into dance while Wasilla’s own Portugal. The Man’s hit song, “Feel it Still” played with safety preparedness lyrics dubbed over. They danced around the turf and “saved the lives” of young volunteers dressed up as zombies.

There were several presentations onstage covering various forms of safety and preparedness for emergency situations, general safety, injury prevention and even a mascot dance off with Sparky the firehouse dog from Mat-Su Central Fire Department defeating Perry the Preparedness Penguin from Fort Richardson. One of the presentations on stage was a legal recognition of a young adult’s dedication to safety in her community.

Teagen Tanner was awarded a legislative citation for her Helmets on Heads (HOH) nonprofit organization. State Rep. Cathy Tilton presented the citation to Tanner and explained how the legislature came to recognize her efforts of promoting public safety. Tanner started HOH in 2015 after recovering from traumatic head injury from an ATV accident. She wasn’t wearing a helmet and almost died. She said she made it her mission to prevent as many head injuries as she can by giving away free helmets and promoting helmet safety at events like the expo. In the first nine months of her program, Tanner raised more than $45,500 and donated 66 helmets. To date, she raised $69,385 and given away 300 helmets.

“We’re grateful for her inspiration , her dedication and her contributions to the community,” Tilton said. “We’re always looking for people, especially young people who are promoting safety in the community. It shows that in Wasilla, there are still young people out there who want to make a difference.”

Tanner said that traumatic brain injury rates are higher in Alaska than most other states because so many people ride ATVs, dirt bikes and snow machines and it’s “a part of our culture.”

“It’s definitely an honor. I’ve put many hours into this, a lot of hard work,” Tanner said.

“She took something that was a tragedy and turned into something positive, not just for her but for everyone,” Tilton said.

“I call it tragedy to triumph,” Tanner said.

Tanner is still recovering from her injury, saying that her memory is still foggy. She works a full-time job and dedicates a lot of her time outside work to her mission.

The NCRC dogs were hard at work at the expo, getting cuddled from all sides throughout the day. A large, Saint Bernard named Rufus laid on his back with his paws up, readily receiving precious pets from the public. In once instance, he lived up to his breed’s nickname as the nanny dog. While he was looking a completely direction, a stroller with a baby rolled by. He seemingly sensed the baby and perked right up and approached the stroller, welcoming the precious cargo. The mother commented on how well trained he was.

“Canines have an amazing ability to sense when people need them,” said one NCRC handler, Debra Zastrow.

The NCRC dogs may look like they have an easy job, but each canine undergoes a year’s worth of training. The NCRC dogs undergo insensitive training to learn how to work in complex environments of disasters and to safely interact with people experiencing intense emotions in the aftermath of crises. A recent example is when the team provided emotional support for the victims of the huge apartment fire in Anchorage.

“We are for the people,” Zastrow said.

This is the third year Ridge has coordinated the expo after taking the mantle from Bea Adler, the vice chair of the Local Emergency Planning Committee. Adler said the goal from the beginning has always been to make a “big impact on a low budget.” She said that seeing younger generations take action and the growth of the annual expo is building a “culture of preparedness.”