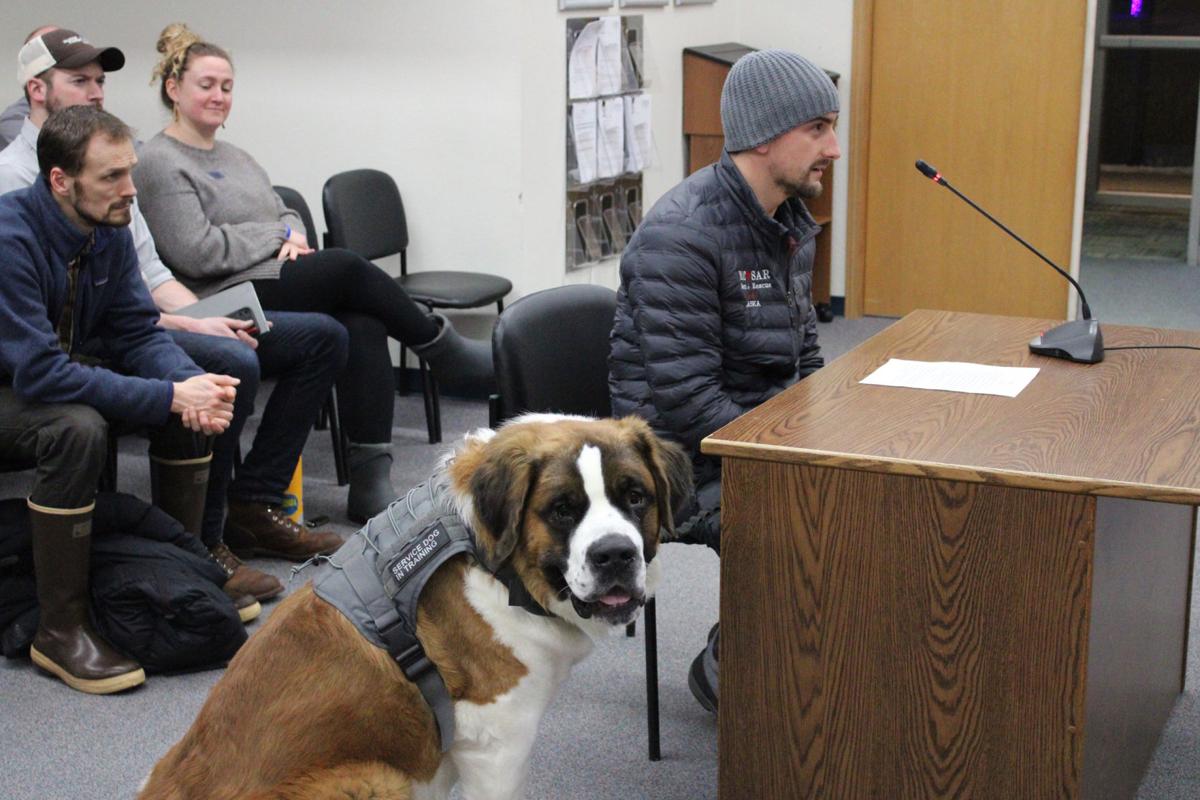 Tristan Hampson speaks during a Palmer City Council meeting Tuesday. Hampson is a K9 handler for Leo, a Saint Bernard, a search and rescue dog for MATSAR. 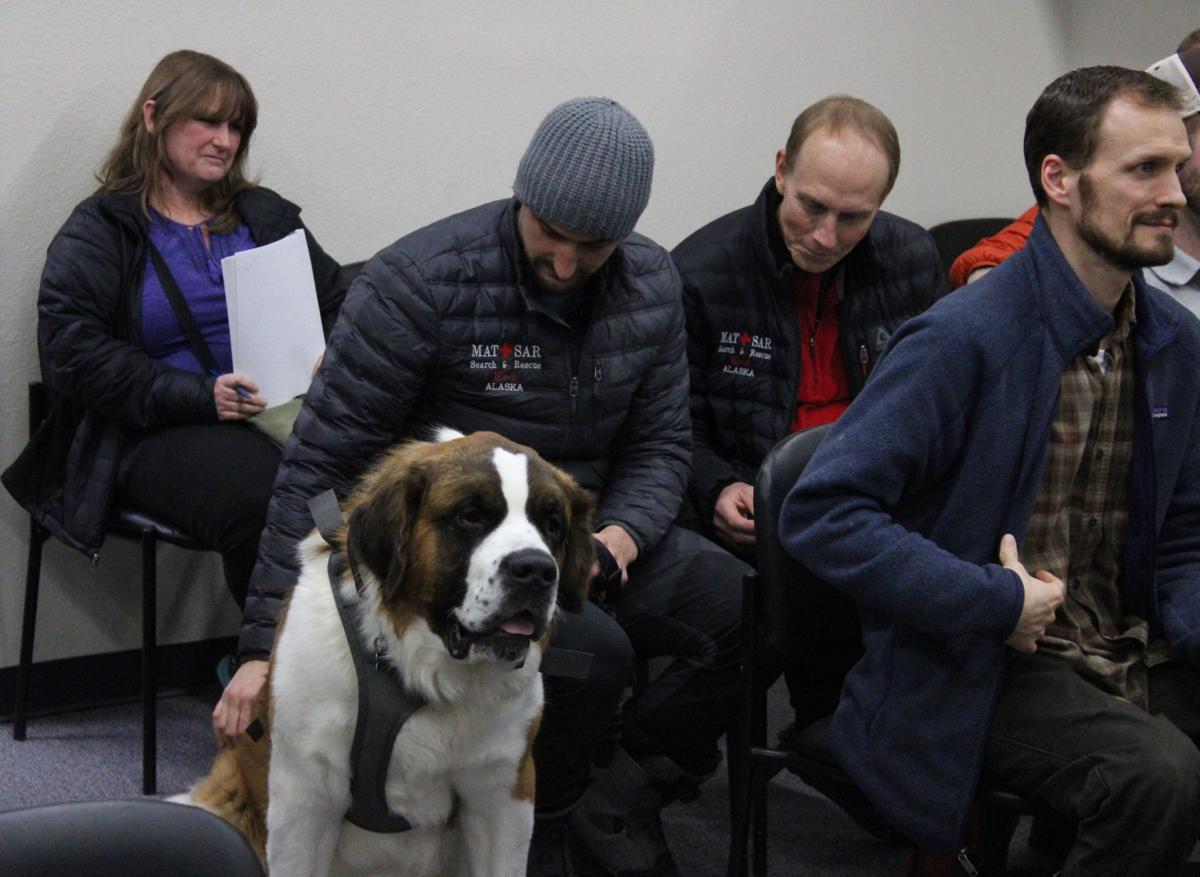 Leo, a Saint Bernard, is a service dog in training.

Tristan Hampson speaks during a Palmer City Council meeting Tuesday. Hampson is a K9 handler for Leo, a Saint Bernard, a search and rescue dog for MATSAR.

Leo, a Saint Bernard, is a service dog in training.

PALMER — After Mat-Su Search and Rescue (MATSAR) was denied in their request for a $1,650 community council grant at the Palmer City Council Meeting on Jan. 14, the council unanimously passed Ordinance 20-012 on Feb. 11 to draw the $1,650 from discretionary funds.

After the 4-3 decision by the council in January, MATSAR training and safety officer Mark Stigar was contacted by Ed Rasmuson of the Rasmuson foundation to discuss funding the nonprofit search and rescue program.

”I want to offer apologies for our clumsiness in dealing with this matter,” said Councilman Steve Carrington. “This is something that doesn’t necessarily fit the guidelines that were written into the community grants but I think this is important.”

MATSAR has had a busy weekend assisting during three days of cross-country ski races at Government Peak Recreation Area. Among the responses MATSAR has made this year are concussions and broken bones.

“Basically we’re here to do first aid get them off the ski trails so that we can call for an ambulance,” said Stigar.

MATSAR consists of approximately 30 members and has assisted the Alaska State Troopers in search and rescue operations for 17 years, but can only respond to an emergency once directed by AST. Formerly, the troopers helped to fund the equipment and training costs for MATSAR, but with a recent lack of funding and inability to raise their own money as a nonprofit, MATSAR went to the Palmer City Council for funds to pay for rope throw bags for near-shore rescues, snowshoes, an iPad and search management software as well as a fuel card and 12-volt jump start battery. Stigar said that yearly costs of operation are approximately $5,000. The troopers will still reimburse search and rescue organizations for mileage and pay for plane tickets to remote emergencies, but equipment and training must be funded by MATSAR.

“The requested funding of $1650 will assist the organization MATSAR to be more effective as a “First Responder” for callouts by the Alaska State Troopers,” reads ordinance 20-012. “This funding request from MATSAR economically assists the City of Palmer by providing an expected level of First Response in an emergency as well as promotes wellness by providing rescue and recovery for those in need both residents and visitors as well.”

MATSAR has received funding from the Mat-Su Health Foundation to help support their Search and Rescue Academy that they have orchestrated for two years, training local law enforcement and Village Public Safety Officers on search and rescue techniques.

“We’ll help train them up and they can be at any skill level,” said Stigar. “What’s different about MATSAR is we not only have canines, we have ground support or ground searchers, we have a motorized section and we’re actually the only one in the state that has a horse group.”

MATSAR has also applied for a grant from the Mat-Su Trails and Parks Foundation. Equipment utilized by MATSAR includes radios and a radio base station funded from a grant from the state, an ATV trailer, avalanche beacons, stretchers and medical kits. A total of six K9 searchers have been certified to a national standard and another 15 are working toward attaining that status.

“We unlike, say FEMA, our K9s are trained and certified in multiple tasks (since we are in AK they need to be Swiss Army Knives) such as mine works off leash (Airscent) Live and also in Human Remains Detection, additionally she has been trained in both wilderness and urban environments,” said Stigar.

During the January meeting, the Palmer City Council cited the requirement that MATSAR conduct their operations within the city of Palmer as a reason for denying the grant. Councilwomen Julie Berberich, Sabrena Combs and Jill Valerius voted for the grant while Mayor Edna DeVries, Deputy Mayor Linda Combs and Councilmen Richard Best and Steve Carrington voted against.