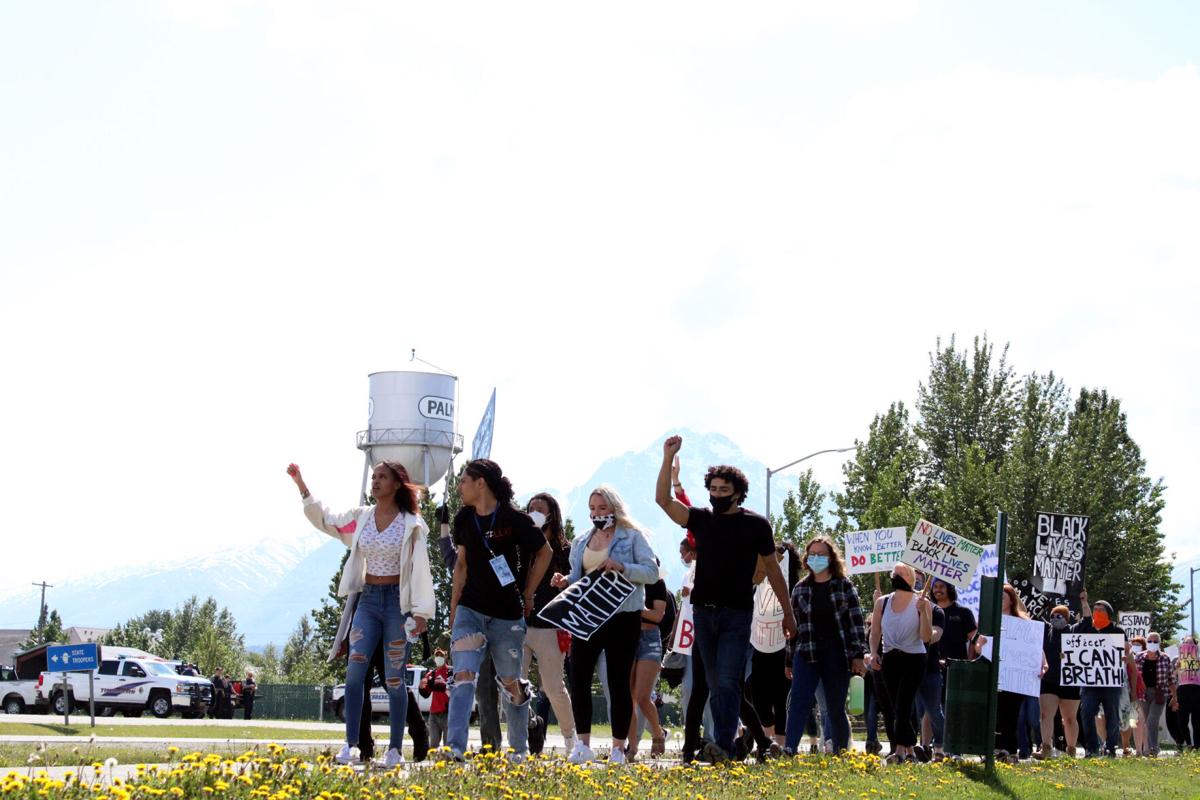 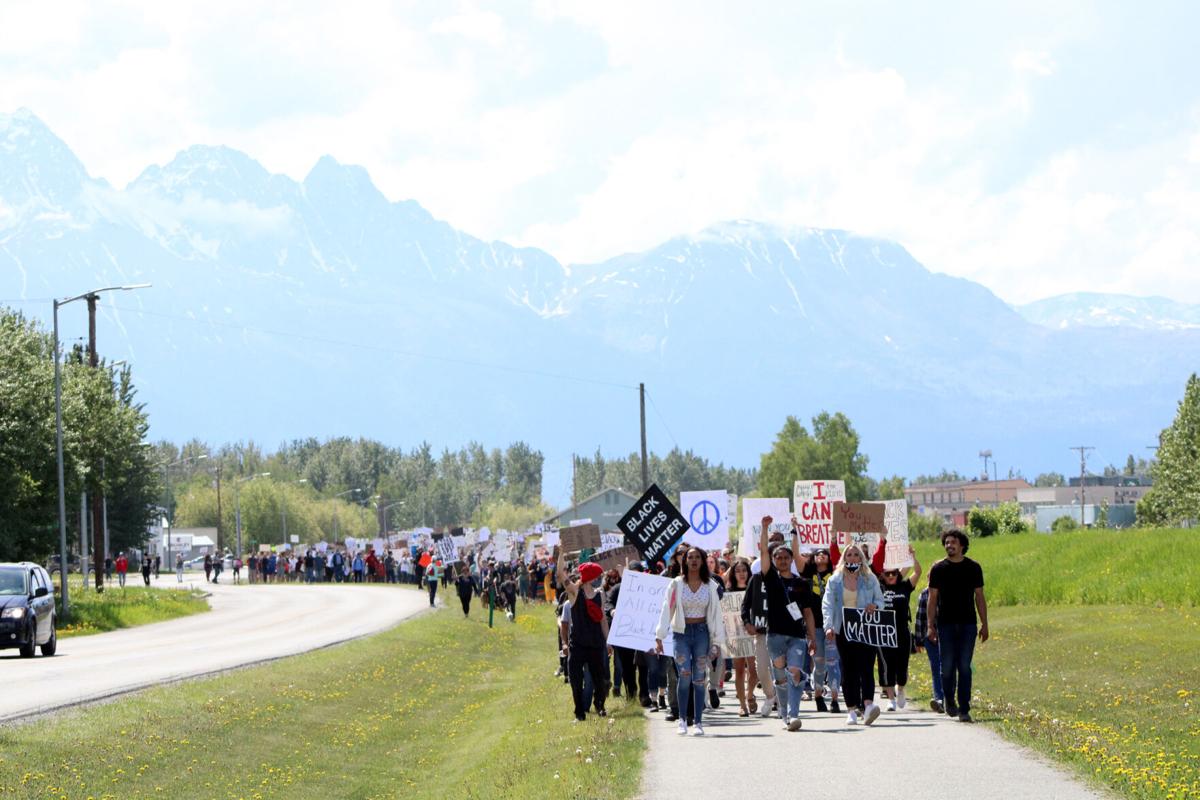 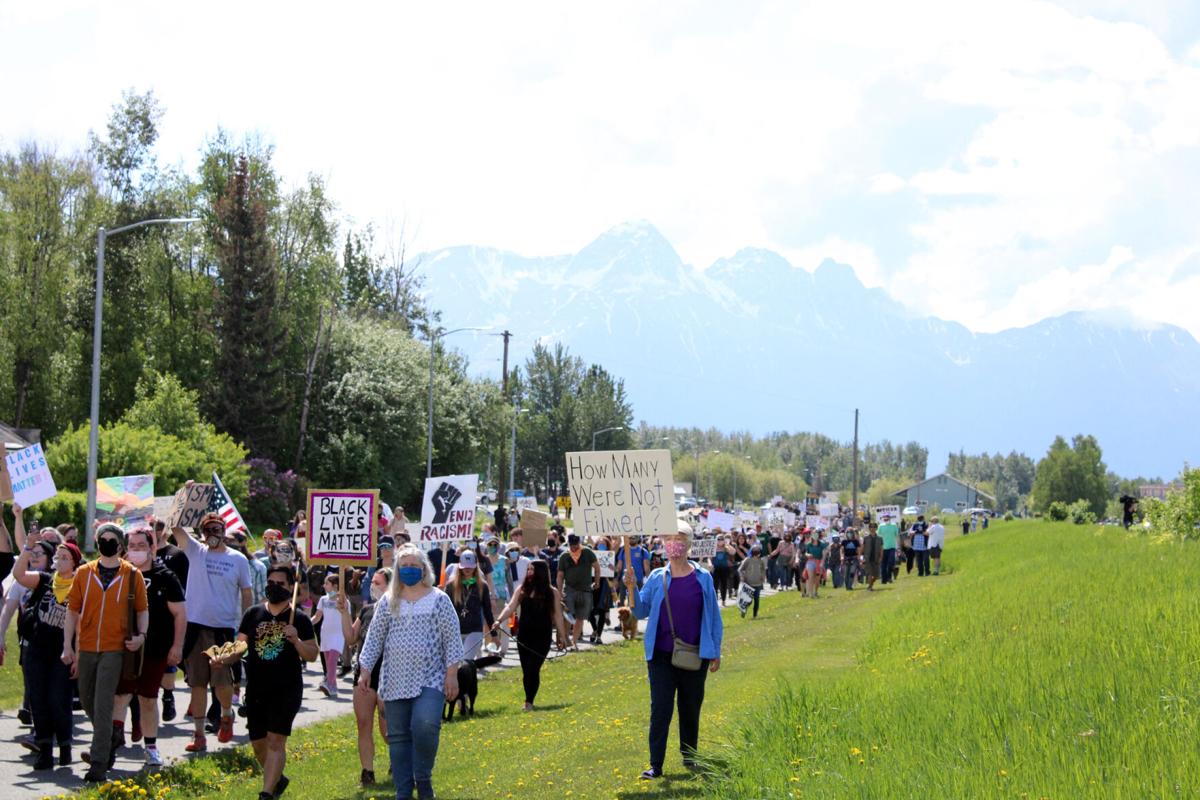 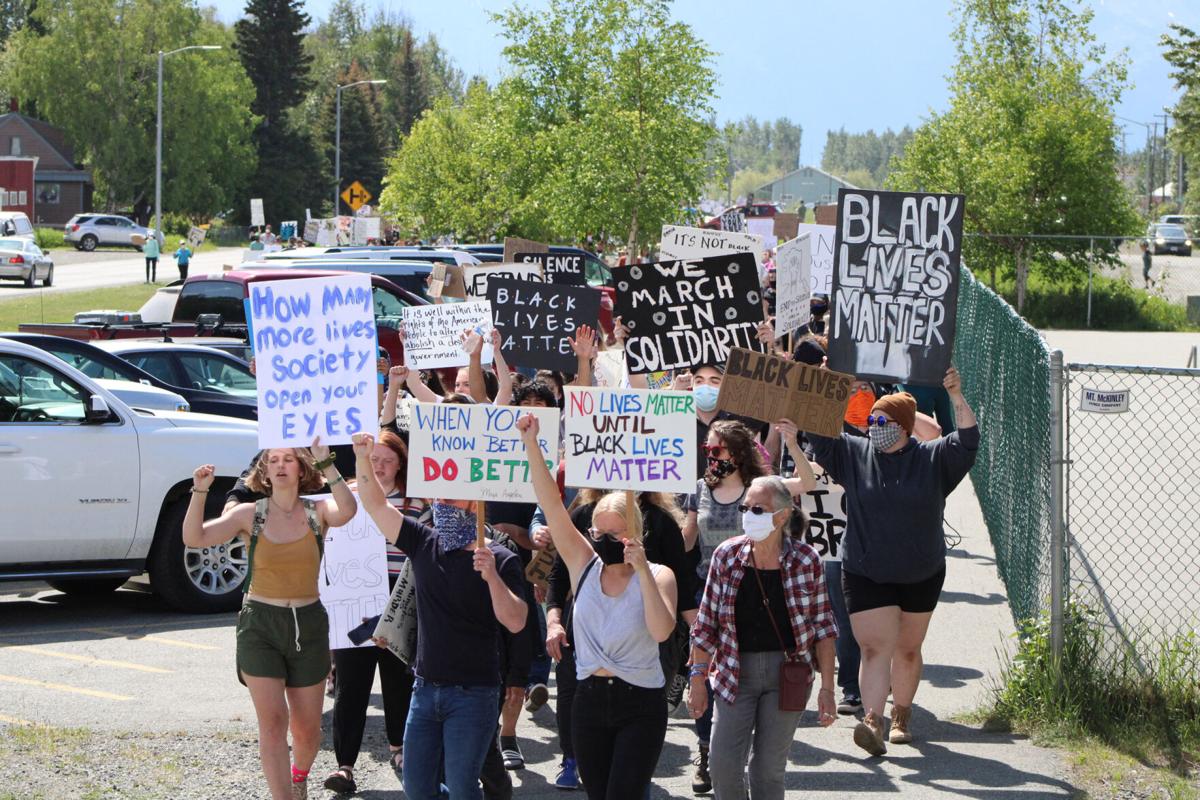 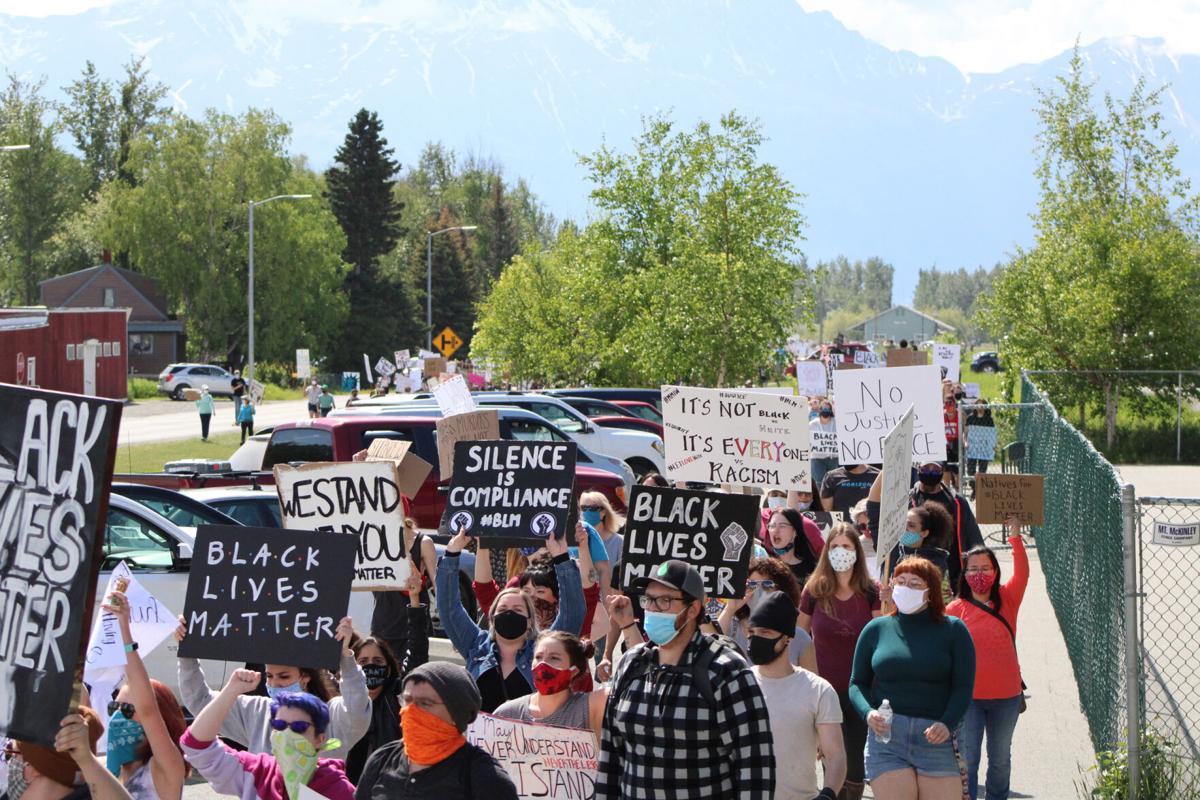 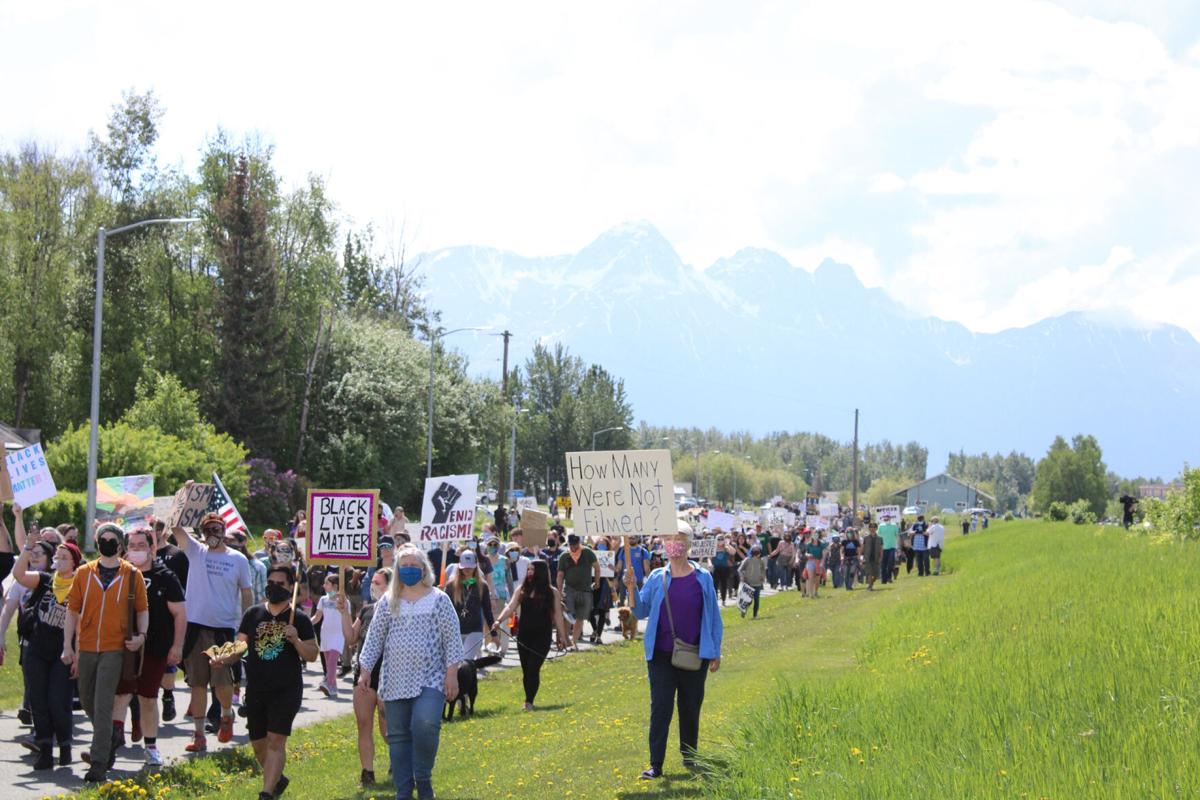 PALMER — A group of nearly 2,000 people of all racial backgrounds gathered in the heart of downtown Palmer on Saturday to display proudly that Black Lives Matter. A vigil hosted for the lives of black, indigenous and people of color who have died at the hands of police injustice went off as planned, peacefully.

A group of teenagers who organized the protest met with a separate group that had gathered at the Palmer Train Depot across from the vigil. The vigil was organized at the pavilion and both the organizers of the protest and the group that met at the depot agreed to walk together down the streets of Palmer to jointly exercise their first amendment rights.

At 7 a.m., a group of local religious leaders met in the parking lot of the Palmer Public Library to pray for Palmer and pray for police during a time of international outcry for police reform.

At 10 a.m., Palmer Mayor Edna DeVries and city council members Steve Carrington and Linda Combs were part of a group of 20 people including black and brown business owners, pastors, and residents of Palmer in prayer at the Train Depot, expressing wishes of revival and reformation in the United States and specifically for police.

At 11 a.m., Luke Howard, who had organized the separate group of citizens who wished to gather adjacent to the protest for Black Lives Matter, walked across East Evergreen Avenue to meet with the organizers of the vigil. Howard spoke at length to the young people who had organized the protest, prayed with them, and asked if he and his group could march together with the group of nearly 2,000 people young, old, black, brown and white down the streets of Palmer.

Peaceful protests and marches began after the May 25 death of 46-year-old George Floyd in Minneapolis under the knee of Minneapolis Police Officer Derek Chauvin, who has since been charged with murder in the second degree. After the announcement Tuesday of the peaceful protest planned in Palmer as a Black Lives Matter demonstration, online commenters made threats of violence against the organizers, and city officials feared for the safety of business and residents of Palmer. The city of Palmer made a statement on Thursday on its Facebook page after a post by Howard on the Facebook page for his group, 907 Freedom. The city of Palmer stated that rumors of an armed militia hired to respond to the peaceful demonstration were untrue and Howard made separate posts encouraging members of his group not to bring high-powered rifles or engage in arguments or violence. Saturday morning, Howard said he had reached out to a family member of the protesters and agreed with the message of Aurora Till, who applied for and was granted the special assembly permit from the city of Palmer. Howard said that Till had done an amazing job.

“I made that video after I talked to Palmer PD, after I talked to Alaska State Troopers. They did say, hey if any of your people have video of any lawbreaking going on, can you turn it over to us. I said absolutely. If any of you are roving or watching from your cars on different parts of the path, can you call us if you see anything suspicious. I said sure,” said Howard. “The agitators and provocateurs on both sides had something to say about it. I’m sitting here in the middle going guys, how do you not hear my message. It’s right there, in the color of video right in front of your eyes.”

The group of teenage women who organized the protest overcame the minor difficulty of a brief lack of electricity under the pavilion in Palmer and took turns speaking their truths about their personal experiences with systematic racism and police injustice, inviting the massive gathered crowd of mask wearing, sign holding citizens to call and respond in phrases such as “No justice”, “no peace”, “Black Lives Matter”, and “this is what democracy looks like.” Speeches and chanting went on without disruption for the gathered mass to hear. Eden Johnson spoke about her experience in Alaska schools, hearing racial slurs even as an elementary school student.

“I always had to sit in the back because my hair was too big. I didn’t understand that,” said Johnson. “First thing just because it’s different, doesn’t mean it’s wrong. This is different. People might be used to their comfort but that’s not what we’re doing anymore and we’re starting with this because it all started when we were kids. People act the way they’re taught to act”

Johnson and three of her fellow organizers educated the crowd and shared their personal experiences with racism. Johnson encouraged those who were listening to actively condemn hate speech if they hear it.

“I think it’s important not only to learn but to teach other people. If you hear somebody say something hateful towards you or somebody you know whether you are white or you are black you need to say something,” said Johnson. “People want to use the argument that we’re all Americans, and yeah we are. So you’d better stand up for your other Americans.”

Following the communication with counter protests and an hour of speeches with an actively engaged massive crowd, the protesters walked along the bike path up South Valley Way and down the sidewalk of South Alaska Street, chanting and receiving cheers and honks from the houses of people they passed and cars along the road.

“How am I supposed to be confident in a system made to protect my rights if it’s the same system killing me,” said Mat-Su Career and Technical High School graduate Reggie Drummond. “We’re here to change that...We’re here so that every person regardless of race is treated the same, is looked at the same, because of what I wear because of the skin color because of my hair, I should not be looked at different.”

Following the march that nearly stretched all the way from the pavilion to Arctic Avenue, the group gathered again to chant, share, and say the names of black and brown Americans who have lost their lives to police brutality.

No obviously violent acts were observed by Frontiersman staff in attendance.

All lives matter. People the world over -- all colors and creeds -- suffer injustices.

That being said, the righteous wheels of justice are purposefully slow. Lady Justice needs to remain color-blind and fair. We should all strive for due process.

My Heart swelled with love today. STand for black lives, stand against oppressive authority and racism, end it now.