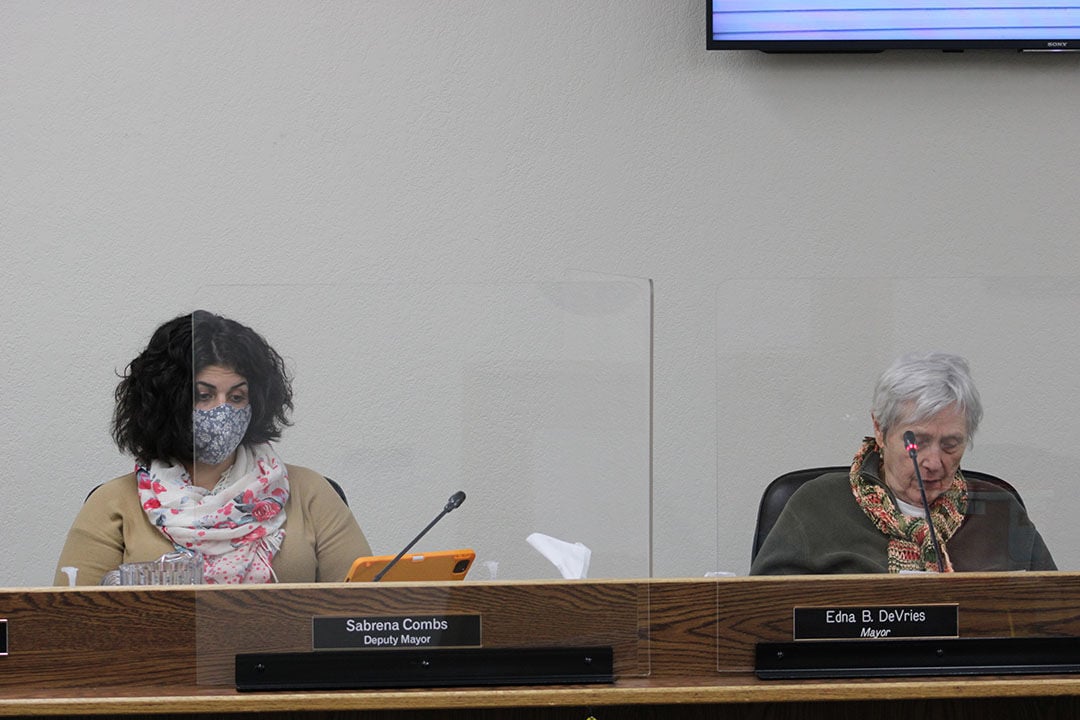 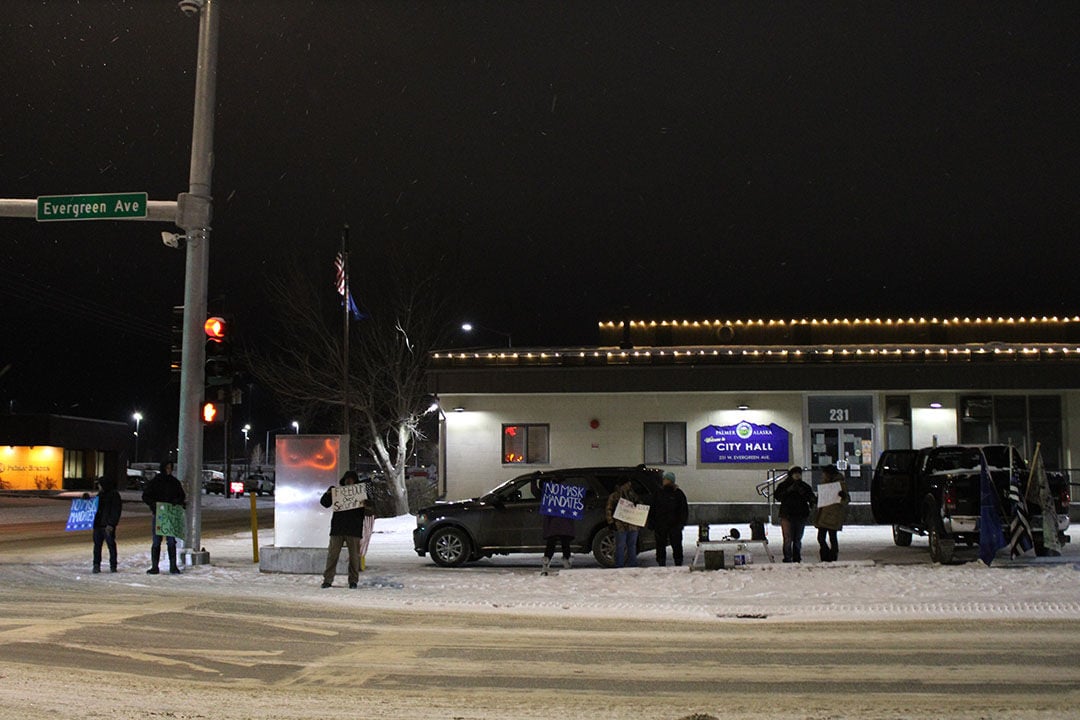 PALMER — More than 16 days and four hours after it began, the public comment period on Palmer City Council Ordinance 20-016 — which would enact a mask mandate — failed by a 4-3 vote of the council after it was amended. The Palmer mask mandate was sponsored by Deputy Mayor Sabrena Combs and Dr. Jill Valerius, though Combs did not vote for the passage of the ordinance.

“Table and then urge, is that what you’re saying?” asked Mayor Edna DeVries.

As soon as the over 600 emails had been read into the record by City Clerk Norma Alley, Deputy Clerk Kara Johnson and Manager John Moosey, Valerius moved to table the highly scrutinized ordinance and instead, urged citizens of Palmer to wear masks, socially distance in public and follow the guidelines distributed regarding COVID-19 by the office of Gov. Mike Dunleavy. Ultimately, DeVries ruled Valerius’ motion out of order as she attempted two actions with one motion. Combs then moved to approve the ordinance for the purpose of speaking to the issue.

“I hope that we can find a way to do this I’m not comfortable really tabling this until we have some sort of idea of what we’re going to do moving forward,” said Combs.

The debate over the mask mandate raged over the course of four meetings featuring over 60 passionate comments in person, many of which were in opposition of 20-016. Additionally, over 600 emails were received that were determined to be read into the record for the public by the clerks and manager. In the parking lot of Palmer City Hall for each meeting, protestors stood and held signs, waved flags and accepted honks from drivers who supported the anti-mask message. On Friday, about a dozen stood in the parking lot.

“Seeing this on Facebook and seeing it in the news where people are afraid and there’s so much information going on out there and we have seen a bullying aspect within our community and across the country where people have fear of a certain thing and they take it on themselves to police one another whether it’s their business or not. I personally myself have been yelled at due to not wearing a mask. I have heard stories of people that have worn masks and have felt that people were looking at them strangely and so I’ve seen it on both sides of things,” said Councilman Richard Best.

As soon as Combs’ motion to bring the ordinance to the table for discussion was made, DeVries clarified on the record that 20-016 would require six votes to pass, per Palmer Municipal Code’s requirement of 75 % of the voting body for passage of an emergency ordinance. Although she did not vote for the ordinance in the end, Councilwoman Julie Berberich thanked Combs for introducing the mask mandate.

“Whether you like this ordinance or not, three weeks ago the governor felt like we were in such an emergency situation that he had to send out an emergency alert to every citizen in the state of Alaska and that frankly scared quite a few people who came to councilwoman and asked her to do something about it and if we are doing anything in this job, it is listening to our constituents and what they have to say and follow through with it,” said Berberich. “This did not have to be such a politically divisive issue and I see it a failure of leadership, a failure of leadership from the top from the federal government to our governor and quite frankly here, madam mayor.”

Berberich noted the change in hospital capacity in the Mat-Su. Many letters written to the council quipped that only five have died in the Mat-Su from COVID-19, that number is now eight. Others talked about the percent of positivity rates, disparity between cases in the Valley and Anchorage and the number of hospital beds available. As of the time of the meeting on Friday, the Alaska Department of Health and Social Services Dashboard listed zero available Intensive Care Unit Beds at Mat-Su Regional Medical Center, a vast change from when many of the letters were written.

Councilman Brian Daniels made his first official amendment as a member of the Palmer City Council after he was elected in October. Daniels moved to change “shall” to “may” in the first sentence of the ordinance which passed 4-3. DeVries questioned City Attorney Michael Gatti if amendments were also held to a six vote threshold, which they were not.

“I’m pretty torn on this vote because it’s forcing me to choose between what I know in my heart and my brain is the right thing to do, which is masking, and ultimately what I was elected to do which is to represent the will of the people,” Combs said. “We hold public hearings to find out what public opinion is not to push agendas as a lot of people have insinuated. 68 % of those who testified on this ordinance were not in support of it and I feel it’s our duty to abide by our oath of office and act in the best faith of our citizens impartially.

“It’s my hope that those 68 % opposed take a moment to think about the 31% of our community who does not feel safe in our own town. Whether or not you agree on their reasoning, their opinions are just as important and deserve to be heard,” Combs added. “That’s why I brought this forward. It’s our duty to bring conversations to the table to allow for a platform for our community to voice their concerns regardless of what side they’re on. Bringing forward legislation that was requested by our community members should not be taken lightly and I hope those in opposition, specifically as council members take small steps to help their neighbors feel safe rather than respond with hate and anger as I have most certainly experienced in the past couple weeks and some of you even witnessed in these chambers.”

Maybe they can put this on everyone's tombstone who voted against masks. "Only five have died in the Mat-Su from COVID-19, that number is now eight" and it will continue because of the arrogance and self-righteousness of the valley. It is truly pathetic that those who get paid to ensure the health and welfare of those in their communities are that oblivious to what a simple fix this would be to protect these people. Obviously emergency responders didn't weigh in on this, even though they are the one's with first hand knowledge. Think about how fast this virus has escalated, how many have died, how hospitals are almost maxed out. Think about how you would feel if you or someone you cared about had a medical emergency, but got told that there was no room to admit them. Staff shortages, so can't do surgery, too many covid patients to deal with anyone else.... how would you feel? I cannot believe the self-serving arrogance by those who are so wrong.