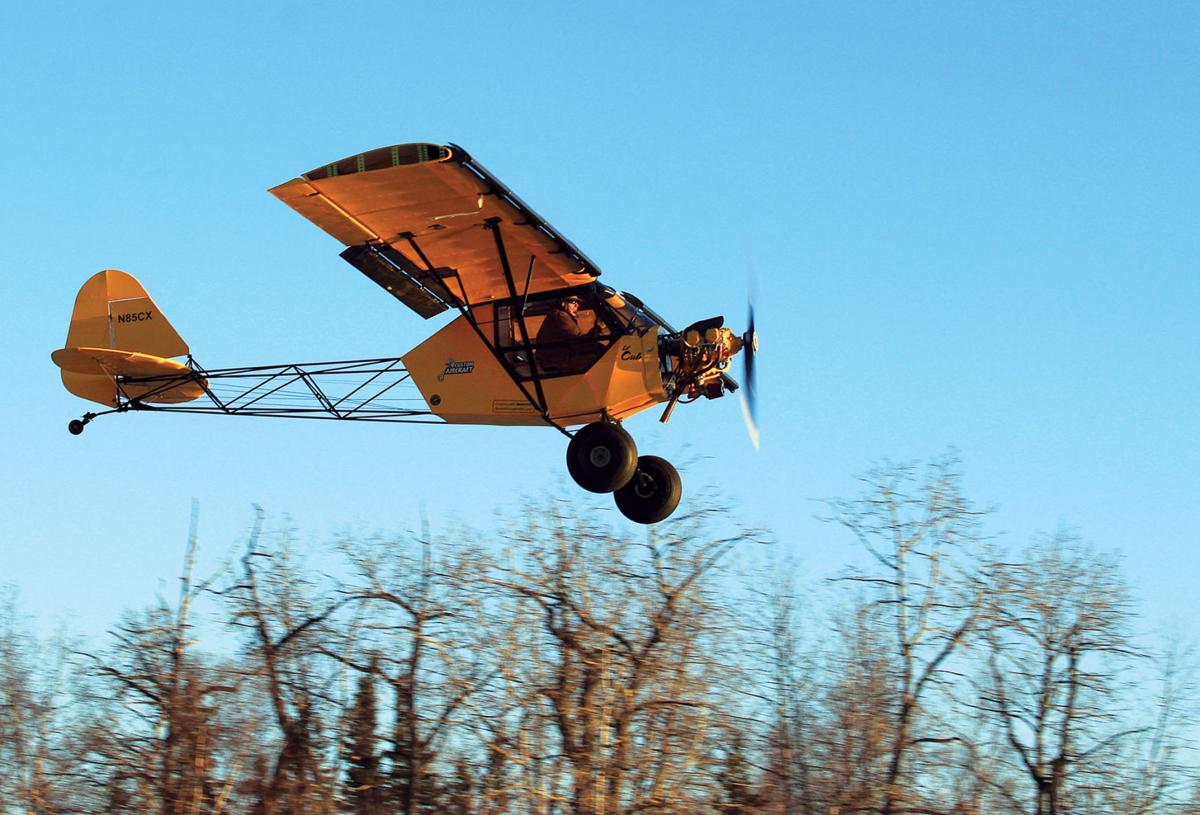 Palmer pilot Frank Knapp takes his plane for a spin over Finger Lake earlier this winter. Knapp is something of an all-star in the bush flying competition world, having won several competitions for shortest take-off and landing. 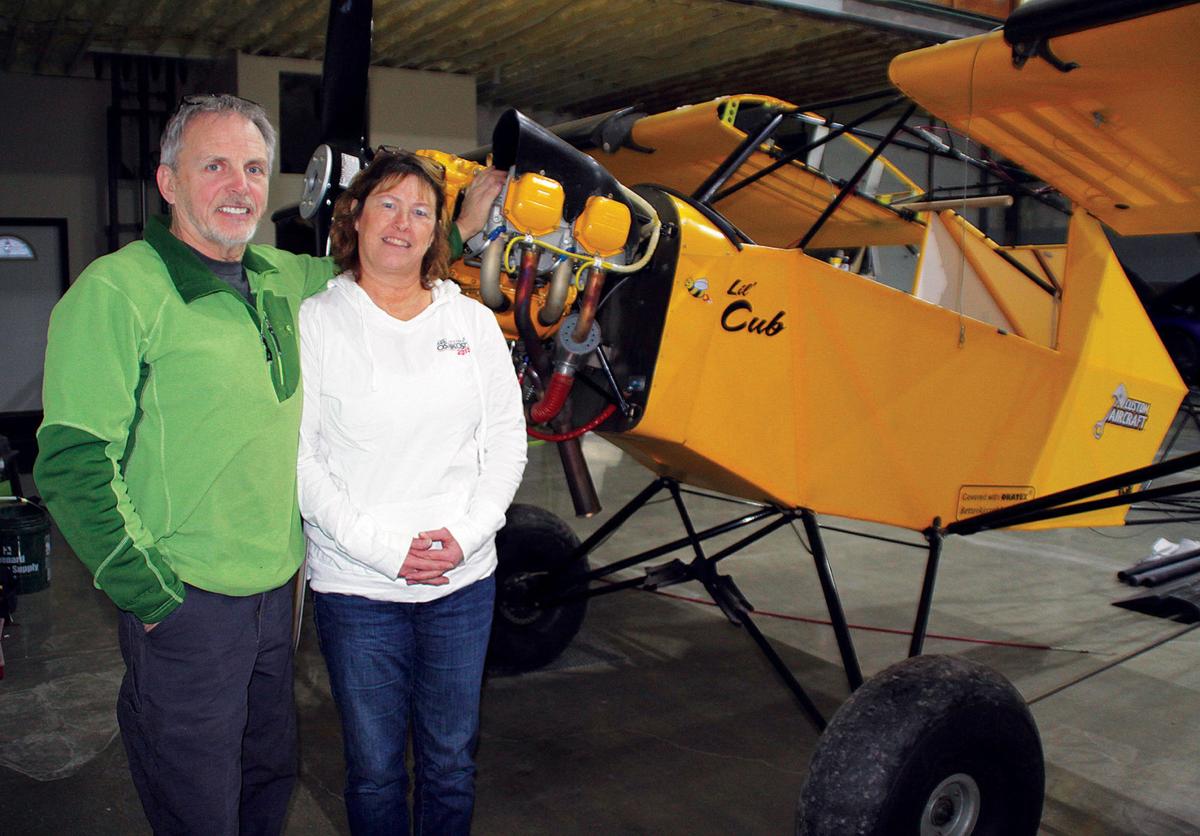 Frank and Kris Knapp pose in front of the Lil’ Cub, a modified Piper J-3, in their hangar Tuesday, Dec. 15. 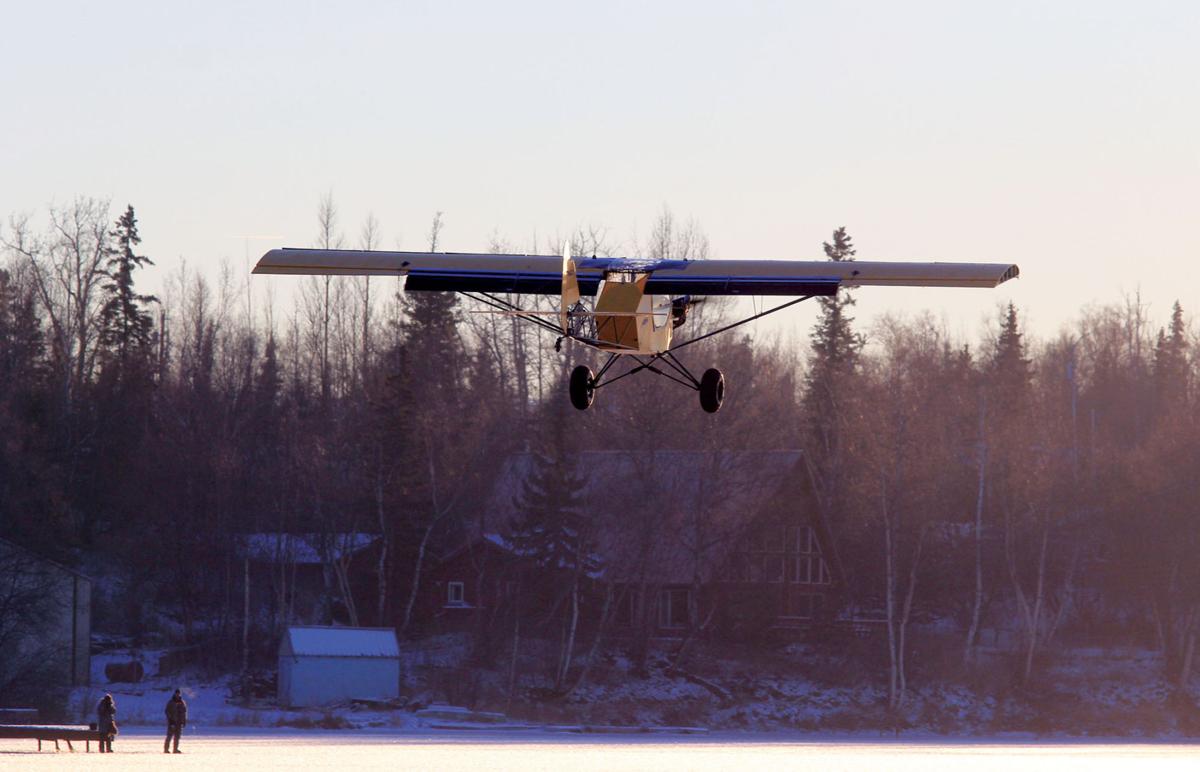 Frank Knapp hovers over Finger Lake during a flight earlier this winter while a pair of ice fishermen look skyward. 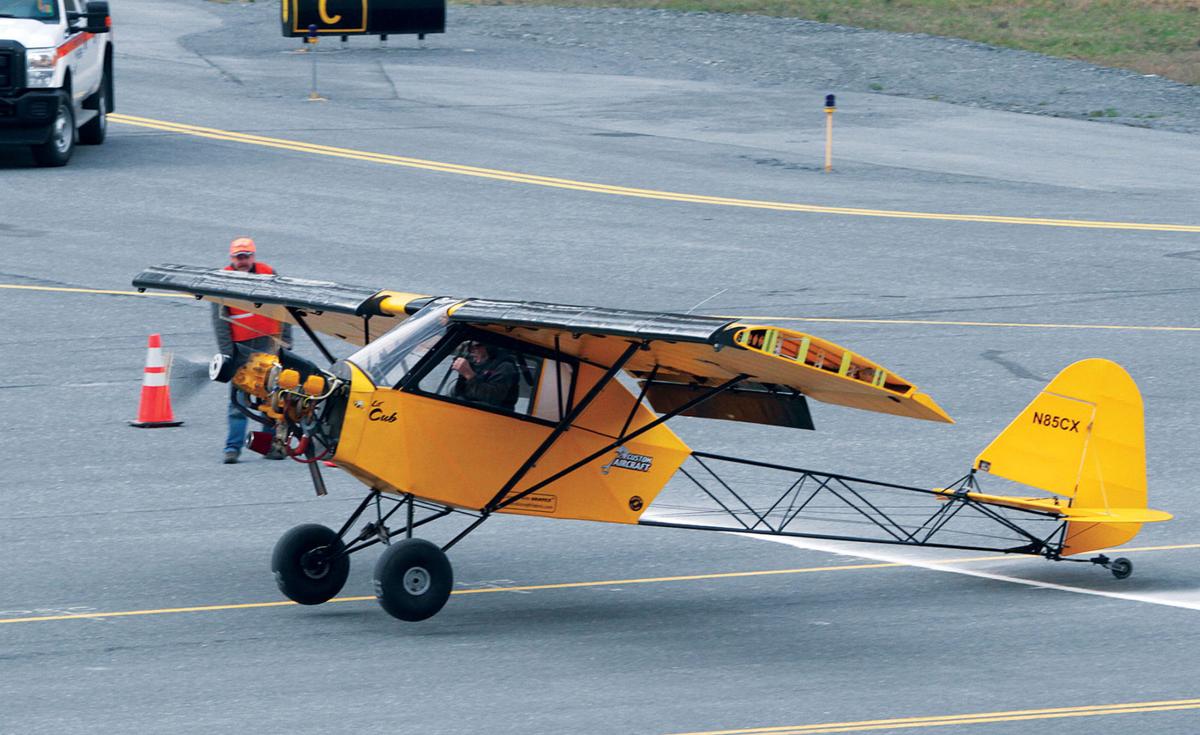 Palmer’s Frank Knapp lifts off in his experimental Lil’ Cub, a modified Piper J-3, at the 2015 Valdez Fly-in and Air Show in May. Knapp registered a takeoff length of 18 feet in the heat. 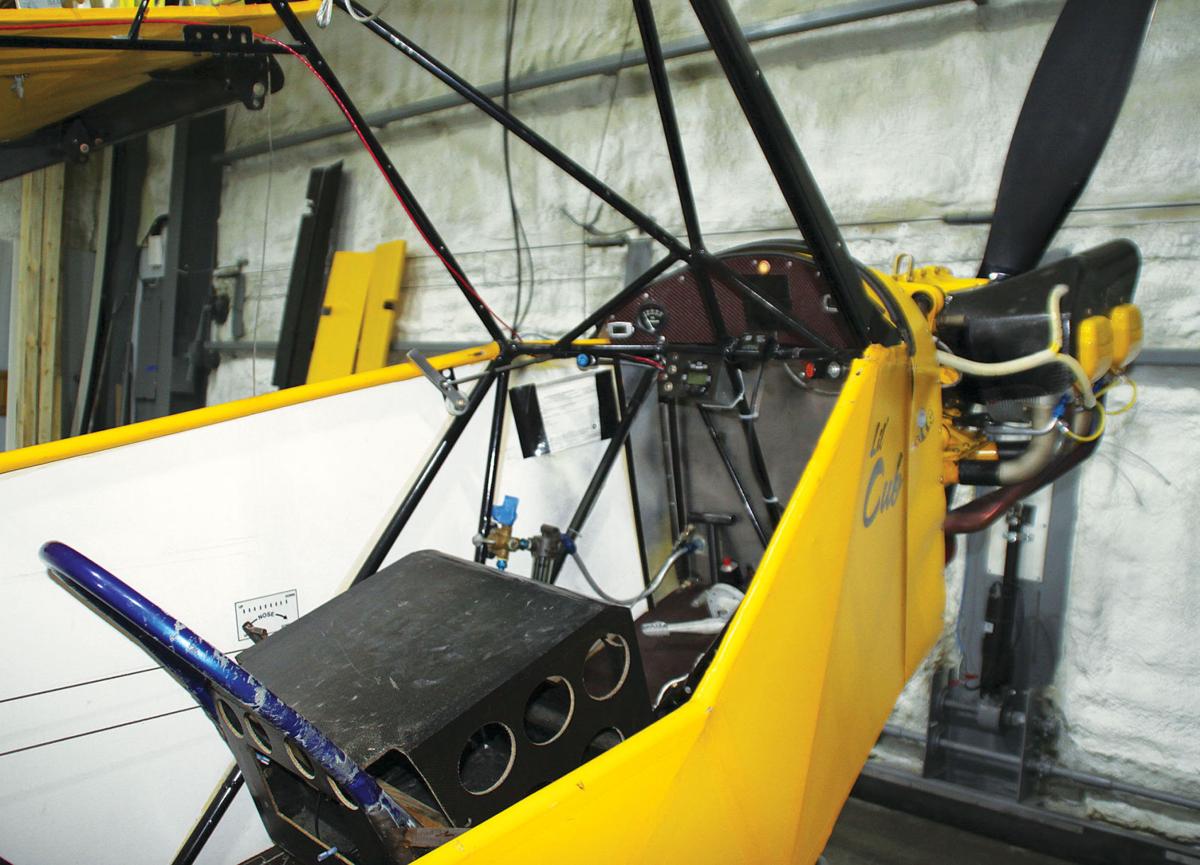 The cockpit of Frank Knapp’s Lil’ Cub, an exerimental aircraft modified from an original 1939 Piper J-3.

Palmer pilot Frank Knapp takes his plane for a spin over Finger Lake earlier this winter. Knapp is something of an all-star in the bush flying competition world, having won several competitions for shortest take-off and landing.

Frank and Kris Knapp pose in front of the Lil’ Cub, a modified Piper J-3, in their hangar Tuesday, Dec. 15.

Frank Knapp hovers over Finger Lake during a flight earlier this winter while a pair of ice fishermen look skyward.

Palmer’s Frank Knapp lifts off in his experimental Lil’ Cub, a modified Piper J-3, at the 2015 Valdez Fly-in and Air Show in May. Knapp registered a takeoff length of 18 feet in the heat.

The cockpit of Frank Knapp’s Lil’ Cub, an exerimental aircraft modified from an original 1939 Piper J-3.

PALMER — If Alaska bush flying had an all-star game, the annual Valdez Fly-in and Air Show would probably be it. And if the Alaska aviation community had all-star trading cards, Palmer’s Frank Knapp would probably have one.

While names like the Ellis family and Ultima Thule Lodge owner Paul Claus are legendary in Valdez, Knapp has become a household name in his own right in the last few years in the alternate Bush class of the fly-in, where his experimental “Lil’ Cub” — a tricked-out craft that was once a 1939 Piper J-3 — keeps pushing the envelope in the short takeoff and landing competition, or STOL.

In a STOL event, four classes of aircraft compete to determine which pilot can make the combined shortest takeoff and landing. Years ago, informal STOL competitions were held across the state, and shows like those held in Gulkana slowly faded into history before Valdez picked up the banner in 2004.

While the aerobatics, sky divers and other bush aircraft-centric events like flour bombing draw crowds nearing 2,000 each year, many come to see the STOL competition, where Knapp won overall titles in 2013 and 2014 and won the class in 2015.

Knapp, 67, said that while he had been attending STOL competitions for years, he began to see the Cub’s potential early on as he and his wife Kris worked to modify the plane.

“I have an unofficial 12 feet,” Knapp said with a grin Tuesday at his hangar, where the bright-yellow Cub sat in a somewhat stripped-down state awaiting new modifications. His said his shortest landing is 22 feet.

“It is insanely fun,” Knapp said of the low-airspeed maneuvers. “But sometimes you do look around and think you’re someplace you ought not to be.”

Indeed, for Knapp, “low and slow” takes on a whole new meaning.

“Just last month I was over at the Palmer Airport, and had a north wind between 10 to 15 that allowed me to stay solid at 12 miles-per-hour along that 6,000 feet of runway,” Knapp said. The Lil’ Cub’s cruising speed is around 70 miles-per-hour.

Along with his success at the Valdez event, Knapp also has been involved with the Experimental Aircraft Association, where he has organized — and won — a STOL event at the annual AirVenture Air Show in Oshkosh, Wisconsin.

The son of bush pilot Roy Knapp, Frank spent much of his youth in the back of a Cub before being allowed to handle the controls. In later years, he tried hang gliding and flew hot air balloons.

“I have always loved the Cub,” said Knapp, a Valley native who retired from Matanuska Telephone Association. “You can see out of all sides and really feel much more connected to what’s around you.”

The Knapps started building the Lil’ Cub in 2011. The original J-3 didn’t have flaps, so Frank went to work adding 13 feet of gear to remedy that as well as beginning the process of stripping and clipping excess weight off the plane.

“Like any other performance vehicle, it’s all about the weight,” Knapp said. “You clip things off, drill holes — every little bit counts.”

The Knapps took the plane to Arizona in early 2013 so Frank could “basically just get used to flying it” before returning for his first win in Valdez. That December, a hangar fire destroyed two planes — a Cessna 172 and another J-3 Cub the Knapps had taken on their honeymoon 35 years ago — and largely destroyed the experimental J-3.

“It was tough,” Knapp said. “I was planning the Oshkosh event and figured I wouldn’t be able to fly, but Kris was great and said, ‘Let’s just rebuild it.’”

They turned the job around in three months.

“Kris did all the fabric work and sandblasting,” Knapp said.

Filled with carbon-fiber and aluminum parts and covered with a Dacron cloth called Oratex, Knapp said the rebuilt plane weighs 700 pounds. The 180 horsepower Lycoming engine — a bigger powerplant for the rebuild — accounts for much of the weight. The rear fuselage features exposed airframe from just behind the cockpit all the way to the covered tail assembly.

But with all the weight-saving features — even the wooden prop is covered with a carbon-fiber sheath — Knapp said is most impressed with the performance of the “slats,” the aerodynamic structures affixed to the leading edge of the wings which allow the plane to fly at slower speeds.

“The slats are the single coolest thing about the wings,” Knapp said. “They give you a much higher angle of attack.”

With the plane in the hangar for the winter, Knapp is planning even more modifications to the flaps, ailerons and landing gear ahead of the May trip to Valdez. Sketches of wing diagrams were stuck to the walls. A bucket of parts pulled off the plane sat in the middle of the floor to be replaced with lighter components.

While the sight of a bush plane seemingly hovering above the ground on a landing approach or just flying at a low airspeed can get a few double-takes from those on the ground, Knapp said the sensation of suspension is thrilling, and is probably why he was drawn to hang gliding and hot air balloons.

“When you can slow things down to that point, you just feel so much more part of the air — especially in a plane like the Cub,” Knapp said. “There really is nothing like it.”

To see more of Knapp in action, click here.

Frank Knapp and others demonstrate short take-offs and landings.