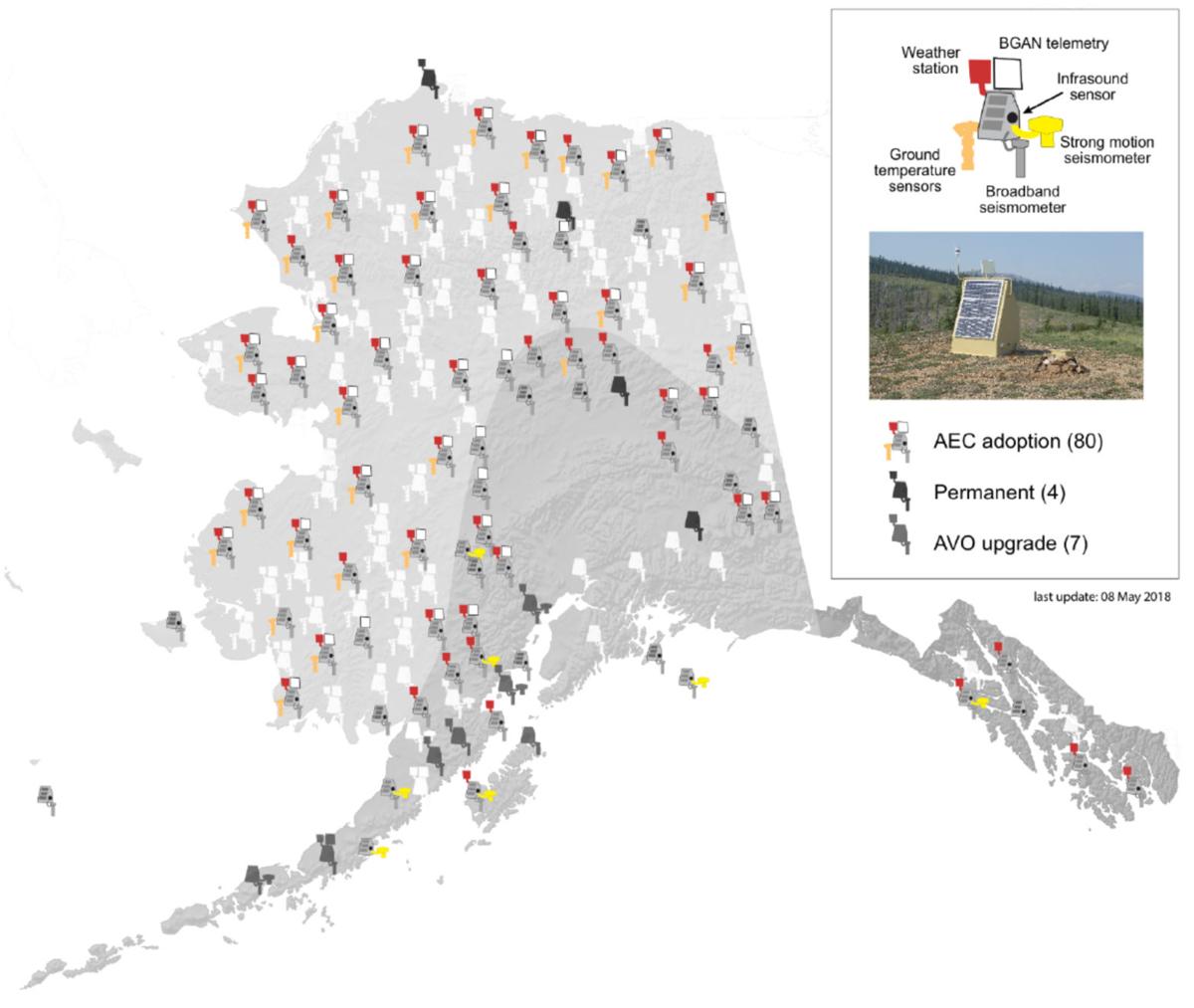 Eighty USArray stations proposed for long-term integration into the statewide monitoring network. In addition to seismic capabilities, most of these stations include auxiliary sensors to track weather, atmospheric disturbances, and downhole soil temperature. https://earthquake.alaska.edu 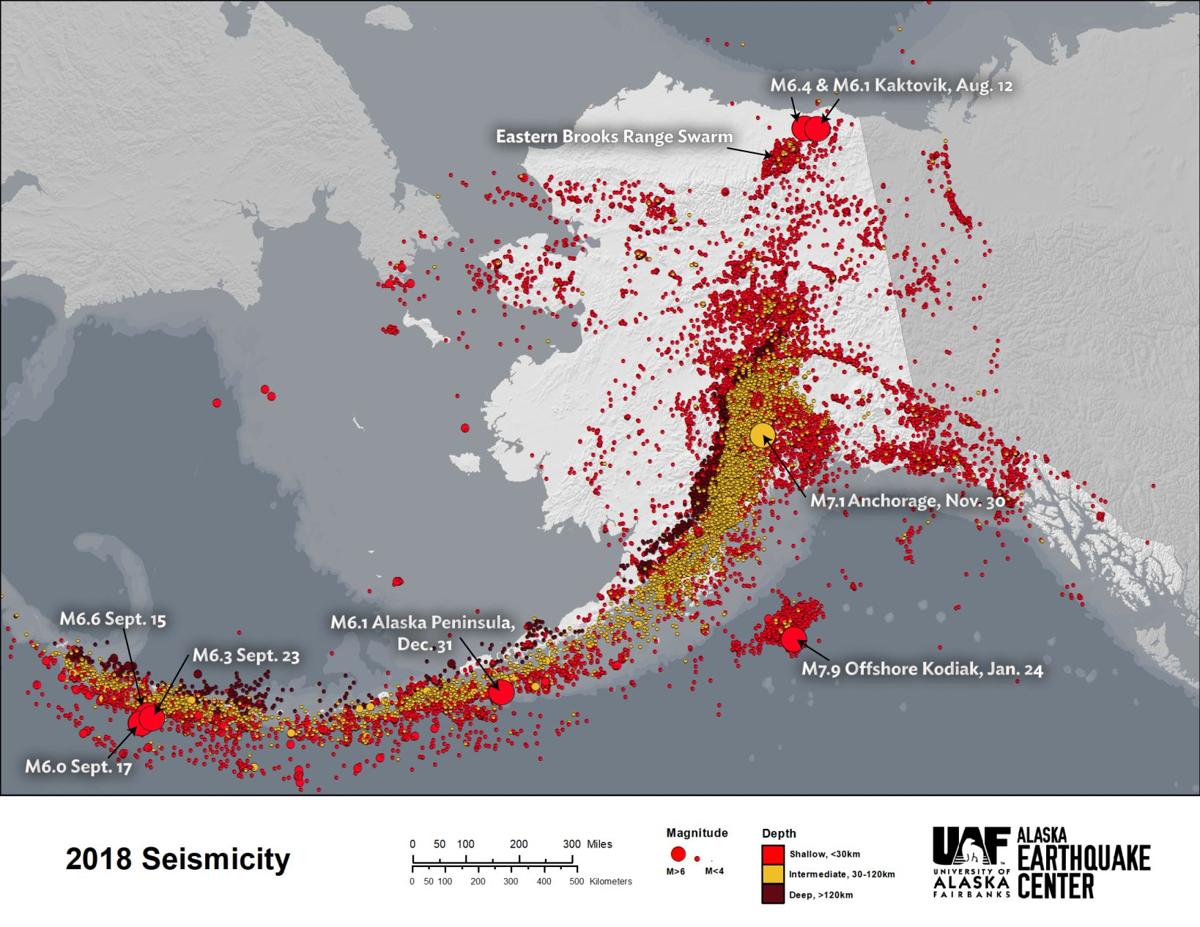 Eighty USArray stations proposed for long-term integration into the statewide monitoring network. In addition to seismic capabilities, most of these stations include auxiliary sensors to track weather, atmospheric disturbances, and downhole soil temperature. https://earthquake.alaska.edu

WASILLA — It is has been almost one year since the magnitude 7.1 earthquake that rattled Southcentral Alaska. Along with it came more than 55,000 earthquakes in Alaska. That broke the previous record set in 2017 by more than 8,000 according to the 2018 Year in Review by the Alaska Earthquake Center.

This dramatic increase is due to the large seismic events throughout last year which led to thousands of aftershocks, and partially due to more seismic stations throughout Alaska. Most of the credit for the 2017 record was due to the 157 USArray stations constructed. The USArray stations monitor seismic activity along with weather tracking, monitoring atmospheric disturbances, and recording soil temperatures.

Many of the earthquakes were aftershocks with low magnitudes. Lea Gardine, a seismologist at the AEC, defined an aftershock as an earthquake after the mainshock and within the same area. Aftershocks are smaller than and could be equal to the mainshock’s magnitude.

Gardine noted that the latter is less likely to happen, and aftershock frequency tapers off as time progresses, though earthquakes have varying aftershock sequences ranging from mild to vigorous. Gardine also said that seismically active areas like in the Southcentral can have another large earthquake in the same area and be unrelated to the mainshock.

There is a constant reality of another large shock happening regardless of any recent earthquake.

Michael West is the state seismologist at the AEC, and is one of the authors of a research article that studied the M7.1 Anchorage quake last year found that the quake did not produce “the most violent near-fault shaking” because it ruptured about 50 kilometers below the surface, twice as deep as the 1964 M9.2. In other words, the earthquake was too deep to produce bad shaking where the Pacific plate meets the North American plate.

Their report also noted the lack of seismic measurements outside of downtown Anchorage.

Gardine said that Anchorage earthquake was “right in the heart of our densest network coverage.”

Other than the 72 stations not operated by AEC, Alaska Volcano Observatory, National Tsunami Warning Center, and Canadian Hazard Information Service, USArray covers most of Alaska outside of the population center and the Yukon Territory. Part of the motivation to extend the USArray Transportable Array network to Alaska was that most of the state was inadequately monitored. USArray began their deployment of the 280 stations across Alaska in 2014 and are scheduled to be deconstructed in the summer and fall of 2020, though 43 stations in the southcentral region will transfer over to the AEC to run with funding from the United States Geological Survey.

Anthony Jones is a senior at Mat-Su Career and Technical High School and is a Frontiersman intern for the 2019-20 school year.