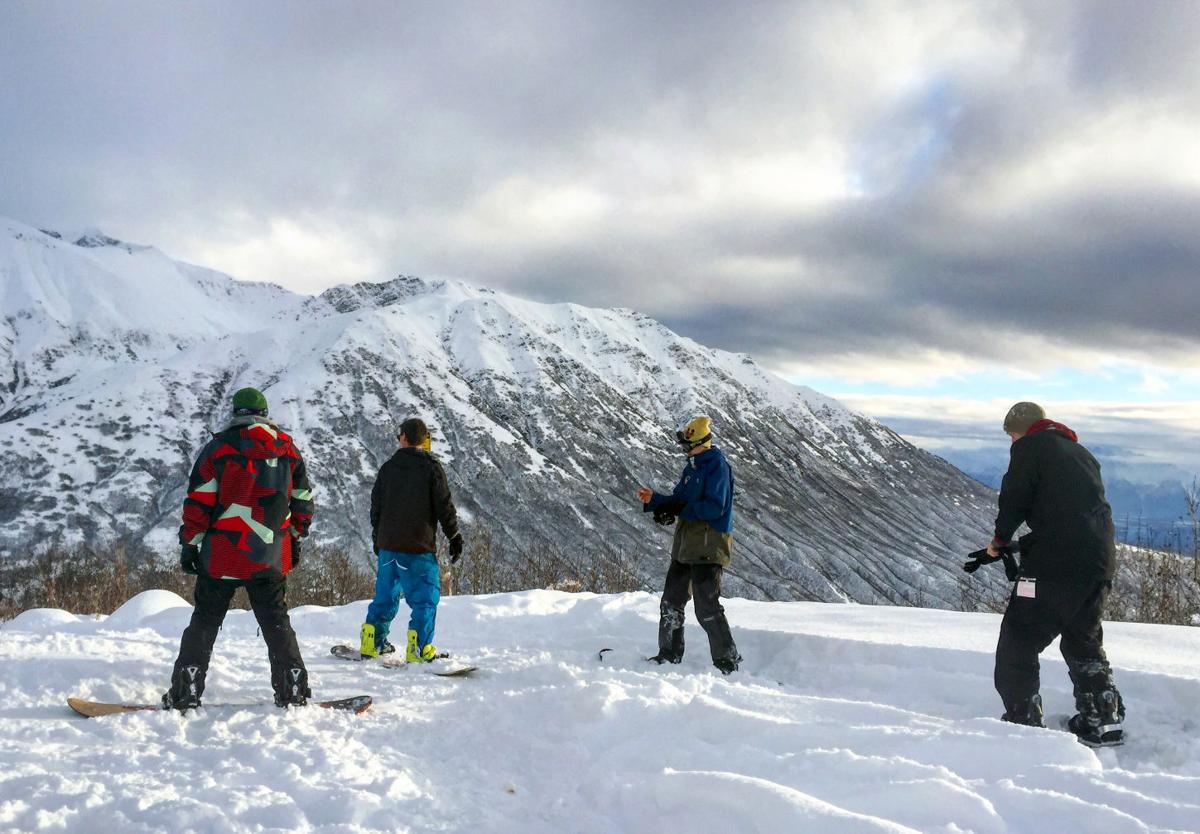 A group of snowboarders prepares to descend a slope in Hatcher Pass on Tuesday, Nov. 10, 2015. The pass is a popular destination for winter recreation, but also potentially deadly — officials say a record three people have been killed there this winter. 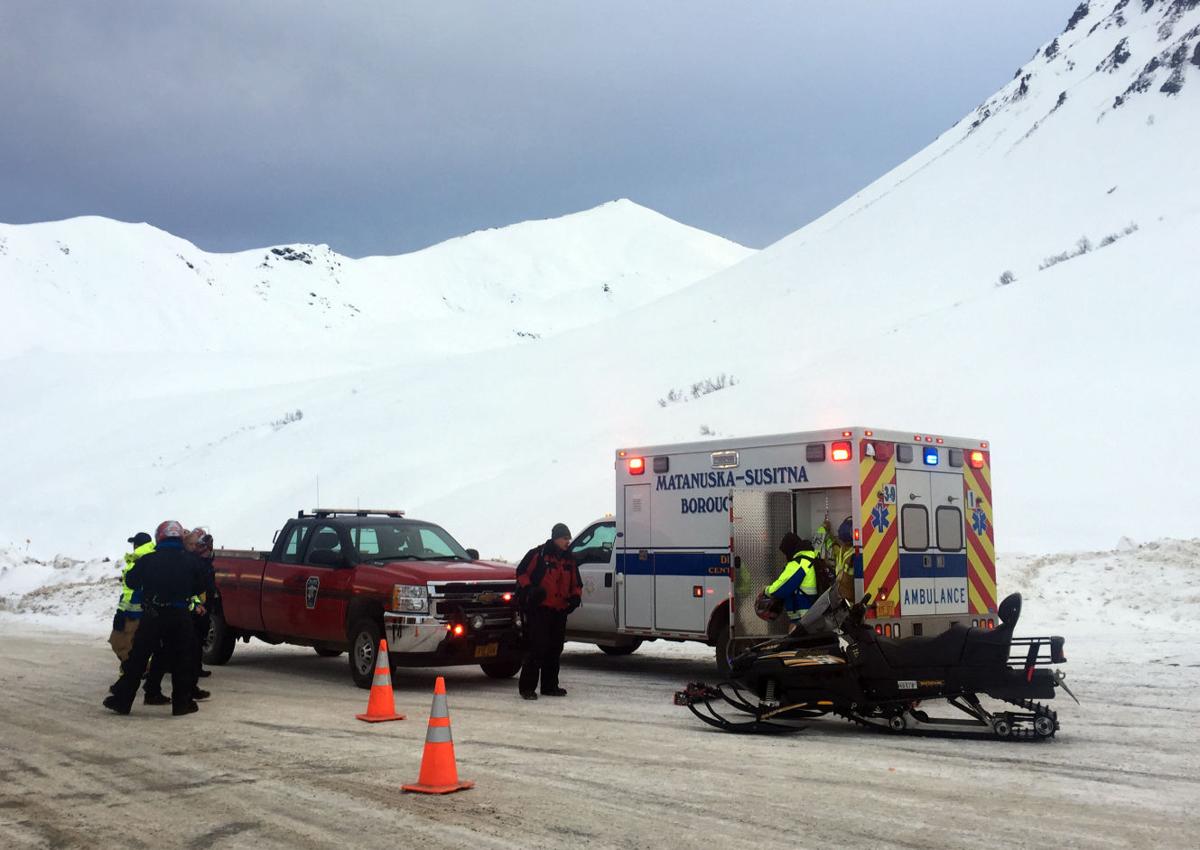 Emergency personnel wait near the Independence Mine State Recreation Area parking lot in anticipation of rescuers' arrival with an injured snowboarder on Jan. 16. The man, 25-year-old Warren Carlyle of Anchorage, was declared dead after paramedics attempted CPR. 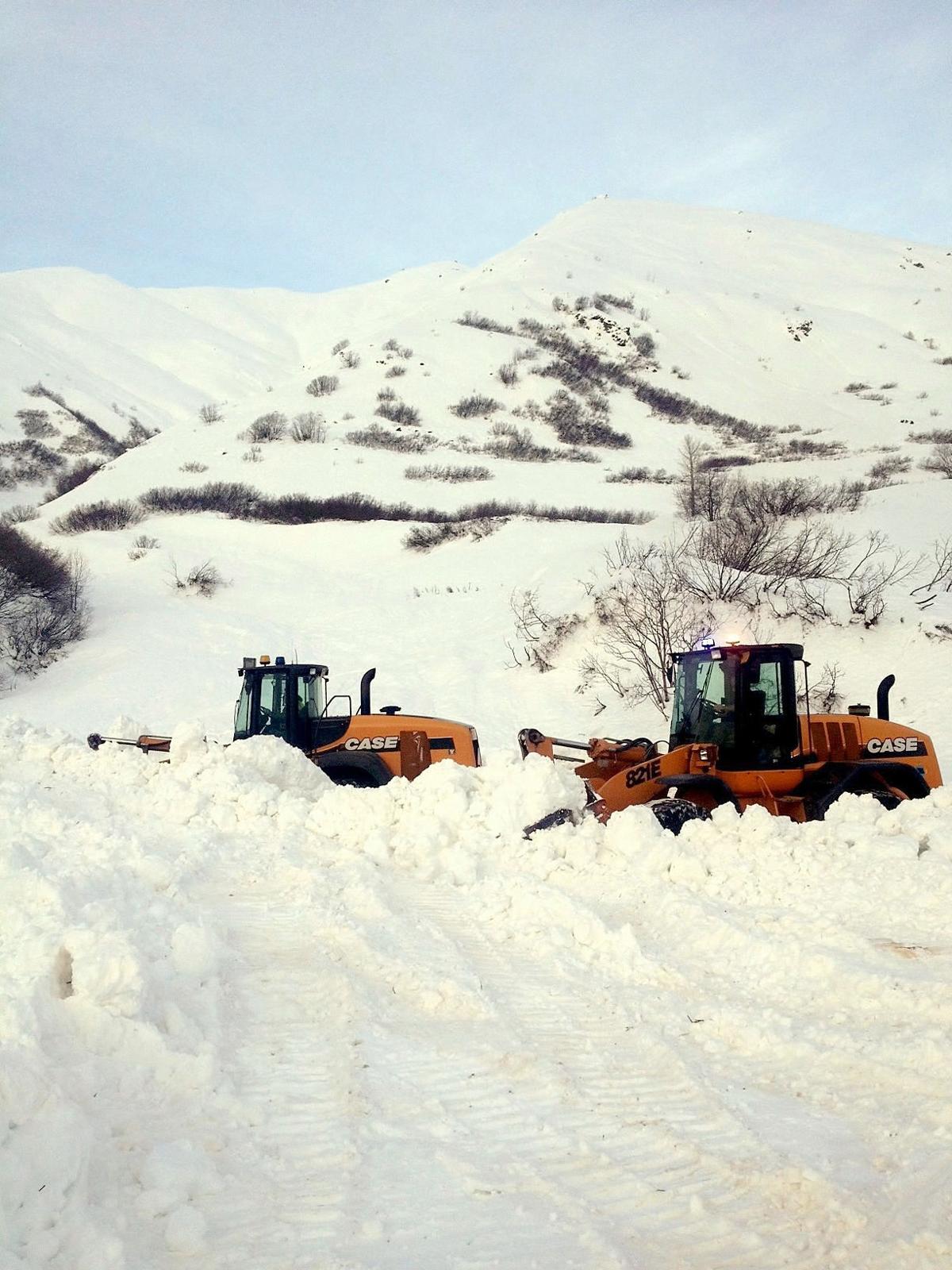 Alaska Department of Transportation crews use loaders to clear avalanche debris near Mile 15 of the Palmer-Fishhook Road in Hatcher Pass Dec. 1, 2015. 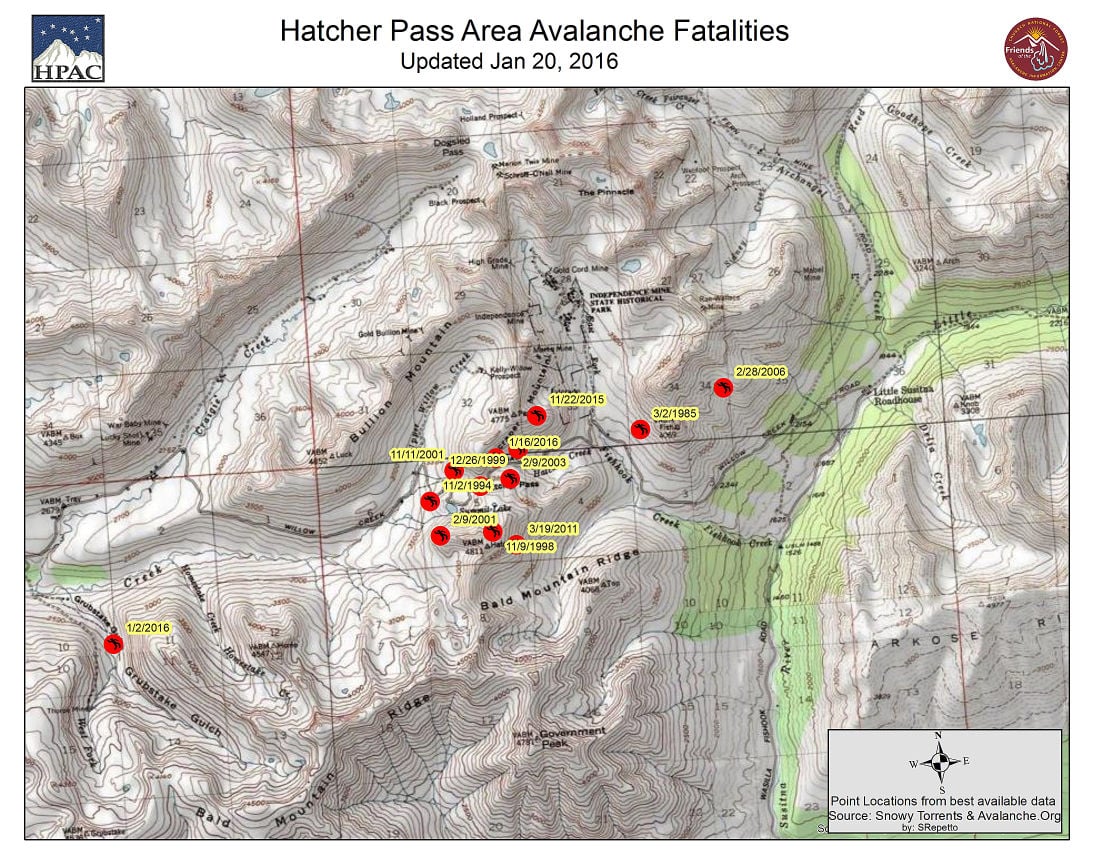 This map shows the number of avalance deaths in Hatcher Pass since 1985. Three fatalities so far this season have been the highest on record in the popular recreation area. 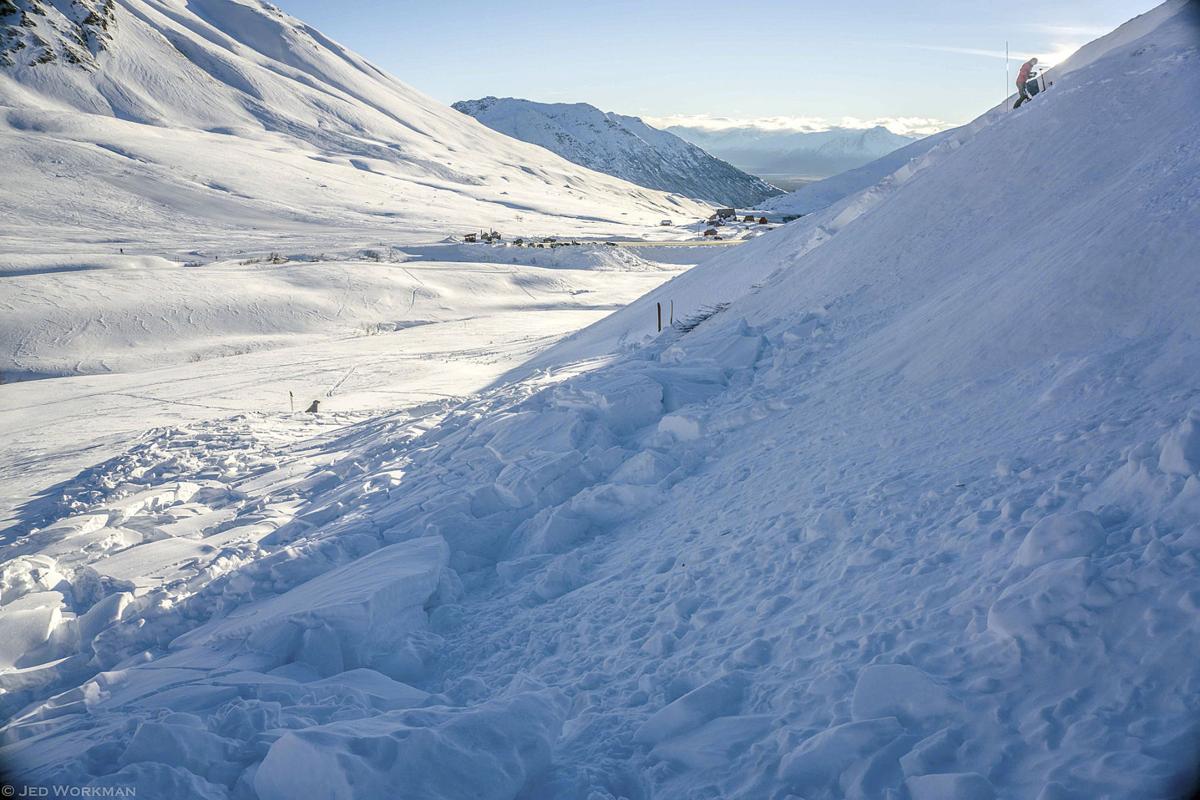 Hatcher Pass Avalanche Center observer Allie Barker, upper right, examines the remains of an avalanche near Independence Mine while her dog Dylan, lower right, looks on. Barker and Jed Workman started the center six years ago after what Barker said was a need for avalanche forecasting and safety in Hatcher Pass.

A group of snowboarders prepares to descend a slope in Hatcher Pass on Tuesday, Nov. 10, 2015. The pass is a popular destination for winter recreation, but also potentially deadly — officials say a record three people have been killed there this winter.

Emergency personnel wait near the Independence Mine State Recreation Area parking lot in anticipation of rescuers' arrival with an injured snowboarder on Jan. 16. The man, 25-year-old Warren Carlyle of Anchorage, was declared dead after paramedics attempted CPR.

Alaska Department of Transportation crews use loaders to clear avalanche debris near Mile 15 of the Palmer-Fishhook Road in Hatcher Pass Dec. 1, 2015.

This map shows the number of avalance deaths in Hatcher Pass since 1985. Three fatalities so far this season have been the highest on record in the popular recreation area.

Hatcher Pass Avalanche Center observer Allie Barker, upper right, examines the remains of an avalanche near Independence Mine while her dog Dylan, lower right, looks on. Barker and Jed Workman started the center six years ago after what Barker said was a need for avalanche forecasting and safety in Hatcher Pass.

WASILLA — It’s only January, and Hatcher Pass has already recorded its deadliest winter season on record with three suspected avalanche fatalities. And for the volunteer avalanche observers who roam some of the most accessible backcountry in Southcentral Alaska, summer is a long way off.

“It has been a record year for deaths,” Alaska State Parks Mat-Su Superintendent Wayne Biessel said Friday. “There has been a string of wind and snow loading events up there that we haven’t seen in a long time.”

Nationwide, 10 avalanche deaths have been reported this season.

Most backcountry skiers and snowmachiners are familiar with the work of the Hatcher Pass Avalanche Center — especially its website — where updates, forecasts, observations, warnings and accident reports fill page after page. What many may not know is that the center is the volunteer work of two Valley mountain guides and homesteaders working a small-scale organic farm.

Allie Barker and Jed Workman started the center six years ago after what Barker said was a need for avalanche forecasting and safety in the pass, a popular destination in both winter and summer due to its proximity to the Mat-Su and mountainous terrain. Both have worked as guides and instructors for the National Outdoor Leadership School, Alaska Mountain Guides and the Alaska Mountaineering School and both have achieved some of the highest levels of avalanche training.

For now, they rely on donations, but ultimately would like to see permanent funding for a Hatcher Pass avalanche center.

“We typically spend at least two to three days a week in Hatcher Pass,” Barker said. “And more days when conditions warrant it. We gather weather data and observations through skiing, digging pits, gathering obvious clues and gathering observations from the public.”

Barker said even though they may put out an advisory once a week, the work behind the scenes continues with maintaining the website, filing paperwork and interviewing partners from avalanche accidents.

“We easily put in 30-50 hours a week, each,” she said. “And a lot more this winter with all the avalanche accidents. Your brain can't be turned off because the mountain environment is always changing.”

Barker said the group typically starts taking snowpack observations around mid-November. Heavy snowfall a couple of weeks before Thanksgiving and the variable weather patterns that followed set the stage for hazardous conditions, she said.

“There was lots of early season snow with extreme weather changes,” she said. “Spikes and drops in temperatures, significant wind and intense precipitation. We saw all of those this November.

“Anything dramatic in the weather creates a higher likelihood for avalanche hazard,” she added.

On Nov. 21, after days of heavy snowfall and wind in Hatcher Pass, the center issued a warning for extreme avalanche danger. The next day, Sunday, experienced backcountry skier Dr. Liam Walsh, 31, of Wasilla, is thought to have headed out from the Independence Mine parking lot for a short run and never returned. The pass was later closed to backcountry as well as vehicular traffic for more than a week while countless avalanches came down from the myriad peaks found in the 300,000-acre Hatcher Pass Management Area. Walsh’s body has not been found, but his family held a funeral in his native New York in December.

On Jan. 2, Anchorage snowmachiner Dashiell Erickson, 35, was buried under six feet of snow after a wind-loaded slab broke loose in the Grubstake Gulch area on the Willow side of the pass. Erickson was described as an experienced backcountry snowmachiner who carried the proper avalanche equipment and was equipped with a locator beacon.

The most recent death occurred Jan. 16, when 25-year-old Anchorage snowboarder Warren Carlyle died after triggering an avalanche high on the slopes of Skyscraper Mountain. He was not wearing a locator beacon, and was not found for some 45 minutes.

According to figures supplied by the center, at least a dozen people have been killed in avalanches in the pass since 1985.

While each accident this winter had its own sets of circumstances and decisions that no one may ever know, Barker said the “human factor” is by far the biggest piece of the puzzle when it comes to avalanche accidents.

“It's ultimately about your ability to make smart decisions in a hazardous environment,” she said. “Often decisions are flawed by emotional factors such as a strong commitment to a plan, familiarity, getting first tracks, impressing friends, doing what we see others do and assuming others know more than we do and following them instead of making our own safety decisions.”

She added that venturing alone into the backcountry can spell disaster, as can unfamiliarity with avalanche gear.

“If you get caught in an avalanche, the best chances of survival are from the companions in your team,” Barker said. “Also, many companion rescuers of avalanche accidents at Hatcher Pass have said that they had not practiced with their rescue gear enough or recently… this contributed to a longer than necessary rescue time, which really matters when we are talking about minutes making the difference.”

Barker said both she and Workman always make an effort to educate skiers and snowmachiners on the inherent dangers the pass presents.

“It's always positive when we see backcountry users spacing out when crossing avalanche paths, skiing and riding one at a time and using appropriate safe zones,” she said. “And recognizing and communicating obvious clues of instability.”

While Barker said she and Workman grew up skiing and climbing in the mountains, both were caught in avalanches in their early 20s.

Both Barker and Biessel said the sheer number of people in Hatcher Pass continues to rise year over year — and with that increase so will the potential for avalanche incidents.

“Way more people are using Hatcher Pass and going into the backcountry than even five to 10 years ago,” Barker said. “Much of the area is avalanche terrain or in the run out of avalanche terrain.”

With the increased use has also come what Barker sees as increasingly risky behavior in the mountains.

“Risk tolerance also appears to be increasing,” she said.

Biessel echoed that sentiment, and pointed to the Jan. 16 avalanche on Skyscraper Mountain as an example. The area is near Summit Lake, a popular snowmachine thoroughfare that takes riders over Hatcher Pass. There were dozens of people in the area when the slide occurred, which he said may have contributed to a false sense of security.

“There are usually people everywhere in that area on any given weekend,” he said. “And there can be a perceived safety in numbers when you look out and see all that.”

Barker said that while the technological improvements in beacons, airbags and other avalanche safety equipment has undoubtedly saved lives, the education component isn’t keeping pace.

“People have associated technology and better equipment as a safer way to go into the backcountry and avalanche terrain, despite their skills or experience,” she said.  “We are seeing people acquire better and faster snowmachines, allowing them to get into steeper and more dangerous avalanche terrain. Unfortunately, the education component is not necessarily keeping pace with the gear, at least in Alaska.”

Barker said the three deaths thus far in the 2015-16 season highlights a demand for a well-funded avalanche center in Hatcher Pass.

“The Chugach National Forest Avalanche Information Center was born after the tragedy in 1999 when six snowmachiners were killed in an avalanche in Turnagain Pass,” Barker said.  “The state of Alaska has a statute that supports avalanche safety, however, it is unfunded. Because our avalanche center is not on Forest Service land — but instead on state land — we are on our own to show the importance, value and need from the community for the center.”

For more information on the center, visit hatcherpassavalanchecenter.org

No signs of missing Wasilla skier in Hatcher Pass

Efforts to locate Dr. Liam Walsh, 33, have been hampered by up to six feet of new snow.

Snow safety extremely important for those heading for the hills

Snow-covered mountains are one of the many reasons why we choose to live in Alaska. Their so…

Man is third to die this winter in popular winter recreation destination north of Palmer.

35-year-old Anchorage man was riding on the Willow side of the pass when the accident occurred.

Hatcher Pass State Recreation Area is a winter and springtime haven for skiers, snowboarders, snowmachine riders and others who want a taste o…

There is a reason for most all other areas and states having ski patrols and areas marked no access!
Mat Su Borough thinks they can create tourism without paying for the infrastructure for such projects

No cure for wasillabilly stupid and corrupt