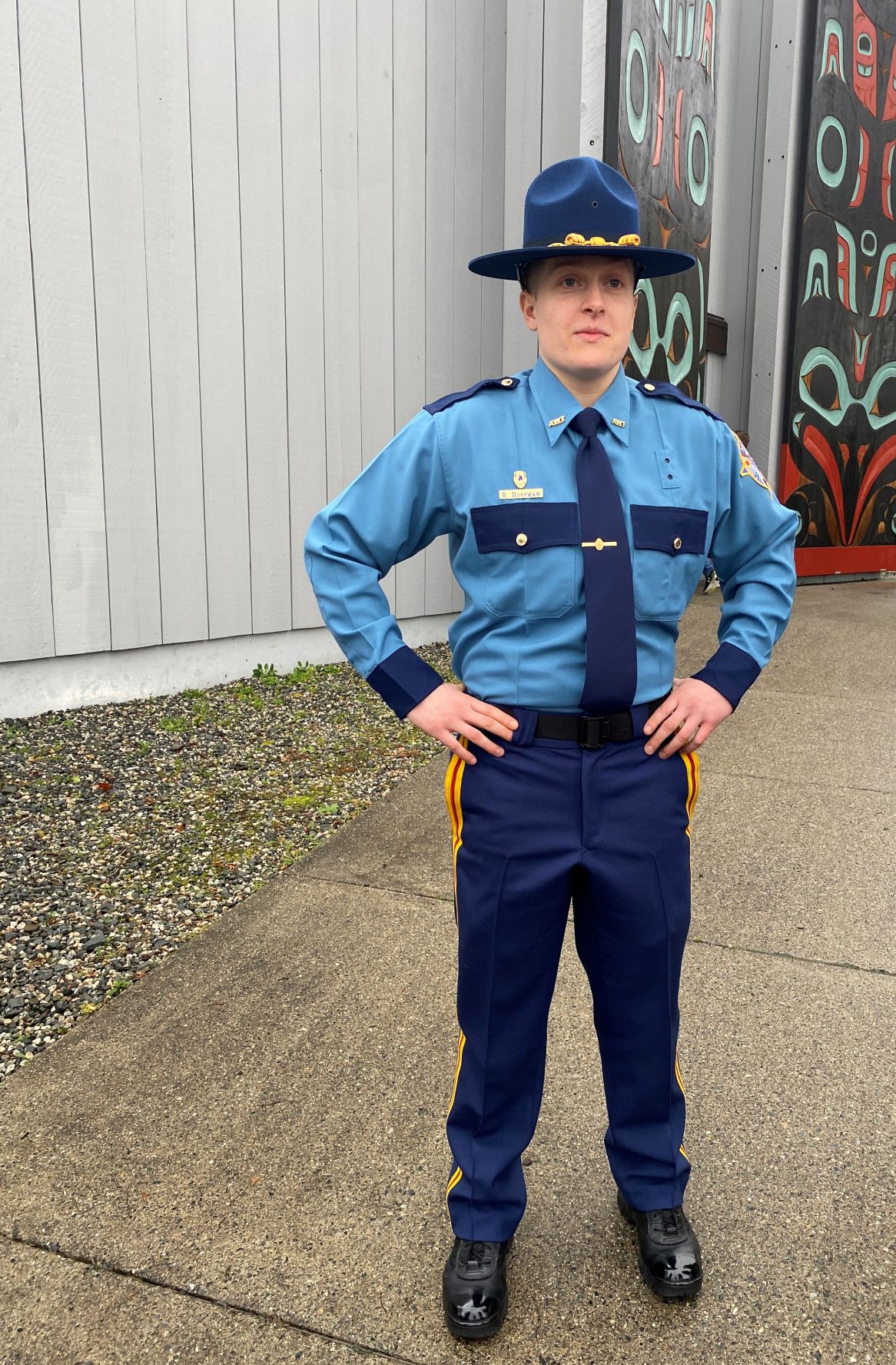 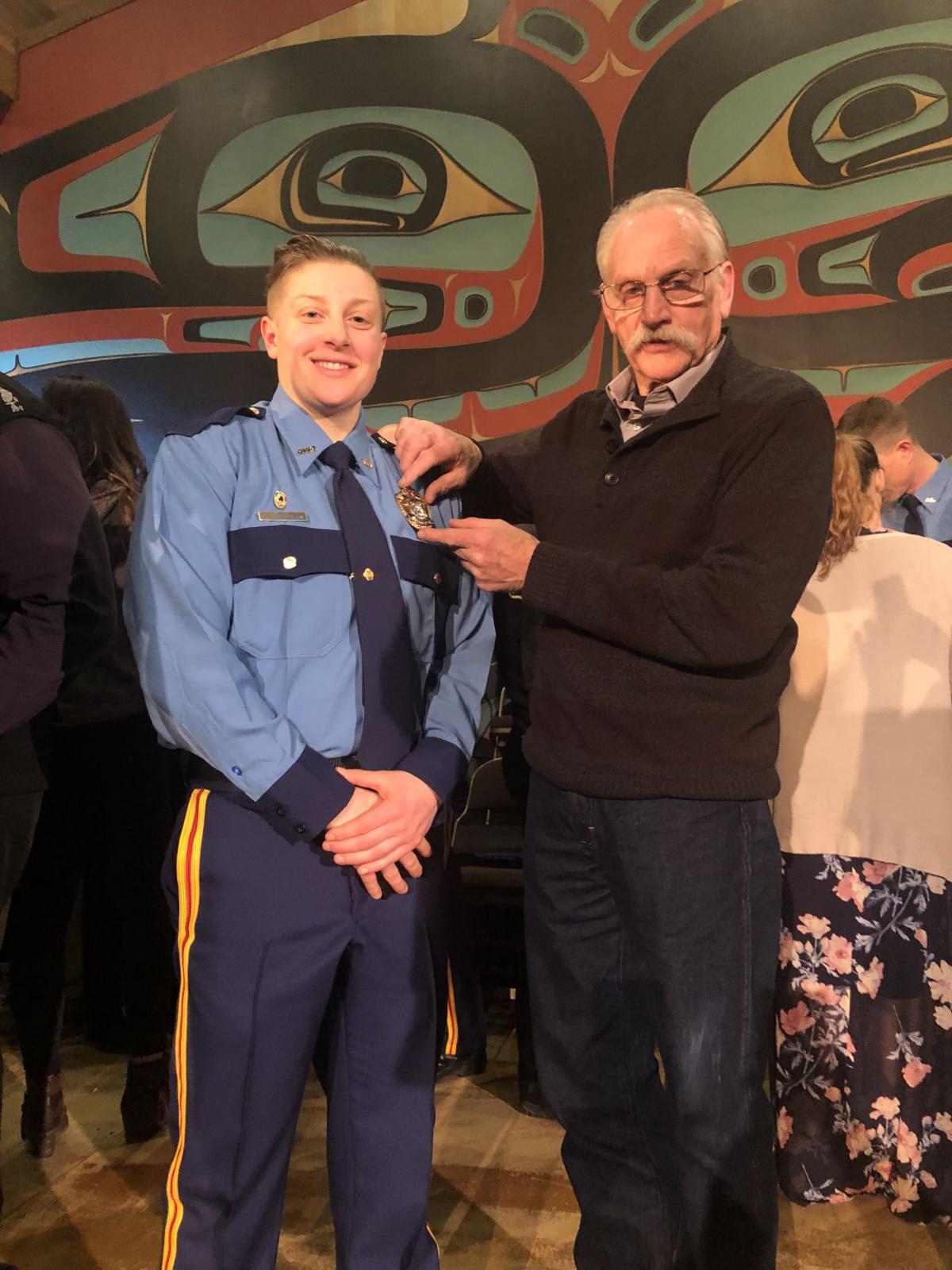 Huffman’s father Frank pins his daughter’s badge onto her uniform during the ceremony. 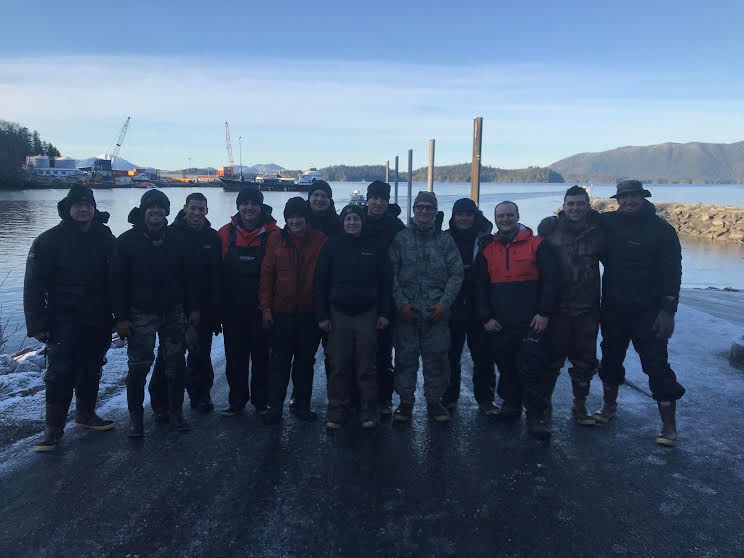 Huffman and 12 of her fellow graduates all went through a three day, two night intensive survival training on a cold, Alaskan island. They call it “Survival Island.”

Huffman’s father Frank pins his daughter’s badge onto her uniform during the ceremony.

Huffman and 12 of her fellow graduates all went through a three day, two night intensive survival training on a cold, Alaskan island. They call it “Survival Island.”

WASILLA — Rachael Huffman recently graduated from the Alaska State Trooper Academy. She’s starting her career in the Mat-Su Valley. She has aspirations to continue work as a Wildlife Trooper across the state in the coming years.

Below is a question and answer interview with Huffman, who is from the Valley, discussing her graduation, background and goals moving forward.

Q: How do you feel about graduating from the academy?

A: “It feels pretty great. It’s kind of relieving but at the same time exciting, because I’m ready to go apply everything that I just learned.”

Q: How long does it usually take?

A: “The Alaska Law Enforcement Training Academy part— that has the Troopers and the municipal officers from around the state—that is a 16 week basic course. The troopers do an extended two week. It’s called the Trooper Basic Course. We learn things that are particular to the troopers.”

Q: What are some of the unique things troopers experience that’s different from other law enforcement training?

A: “The biggest thing is the survival techniques we learned. We did two days in a classroom… with an instructor going over Alaska, what are survival techniques, simulating maybe a plane going down or a boat going down. Then we got to go out for three days. Our instructor dropped us off on an island [off the coast of Sitka] and we stayed for two nights.”

A: “It was definitely a secure environment but we stayed out there for two nights, three days. Basically we had to start fire from scratch. We were allowed to bring some necessary tools. We were allowed to pack a sandwich baggie and that was our survival emergency kit.”

A: “It was. It was a lot of fun. Being on the island was kind of miserable. It will definitely help for something like a plane going down in the middle of nowhere. It’s very unique to the Troopers because the Troopers are the state police in Alaska. They are the ones in the bush planes, in the vessels, running all over the state... It happens; where Troopers are out there for a day or two and they have to do what they can to survive.”

Q: How did it feel when you were really in that nitty gritty of the survival training?

A: “Well, the first night I don’t think it got below thirty… everything was frosted over… The second night is was down around 20. That was probably the most miserable part. I didn’t sleep the second night because I was just trying to keep the fire going.”

Q: How many people were out there?

A: “We had 13 Troopers complete basic but at second night, we ended up corroborating at my fire. We’re supposed to be in groups of two to three and we’re supposed to just go off. But, it ended up being a group effort because we were so miserable. In mean, in my opinion if I’m in a survival situation with 12 other people, I’m gonna be like, “Okay what can we do for each other to keep each other warm and safe?’… We kept it going all night.”

Q: How does it feel to cross that threshold, to make it to the other side?

A: “It feels like a rite of passage. I mean, it kind of is a right of passage. Every Trooper class that goes through this academy has to do some sort of—We call it, “Survival Island”— training. It definitely felt great when we got back to the academy. We were all definitely happy. We all took a nice hot shower. I took a nap.”

Q: I understand you’ll be stationed out here in the Valley?

Q: Have you lived here in the Valley at all?

A: “Yes. So I was actually born and raised in Palmer. I was born at the old Palmer Hospital before it became a state building.”

Q: What drew you to becoming an Alaska State Trooper?

A: “I’ve always known that I was some sort of first responder type. I had a first responder type personality… I did some time as a wildlife firefighter so I got a taste of that… It knew that I was probably heading in the direction of being a cop… It made more sense to me to be a state cop because I would get to do so much. I’d get to go around, see all kinds of people.”

Q: So what are your goals moving forward, maybe the next five, 10 years?

A: “I’d like to spend two to three years, maybe a little less than that here at the Palmer Post. I am coming in as a Wildlife Trooper which means there are so many opportunities available for me across the state. Eventually I’d like to go out to Western Alaska somewhere, where fishing is pretty big and spending some time learning that. It wouldn’t bother me if I ever went to like, the Kenai Peninsula/Soldotna area. That would be a lot of fun as a Wildlife Trooper.”

Q: It sounds like you really want to get out there and explore the state?