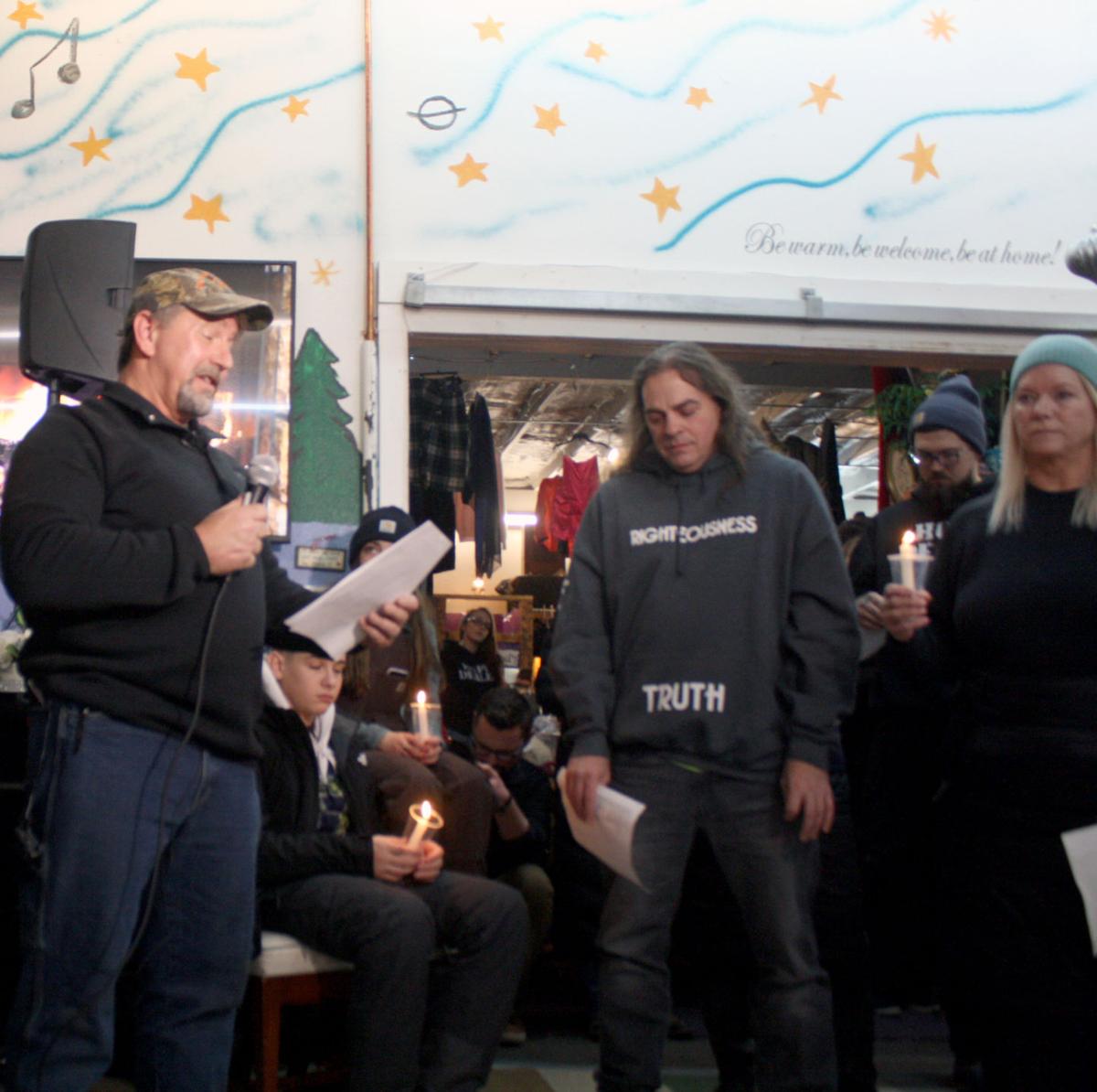 Event founder and MyHouse board member John Green reads the story of how his daughter Kellsie Green died due to heron withdrawl complications in jail. 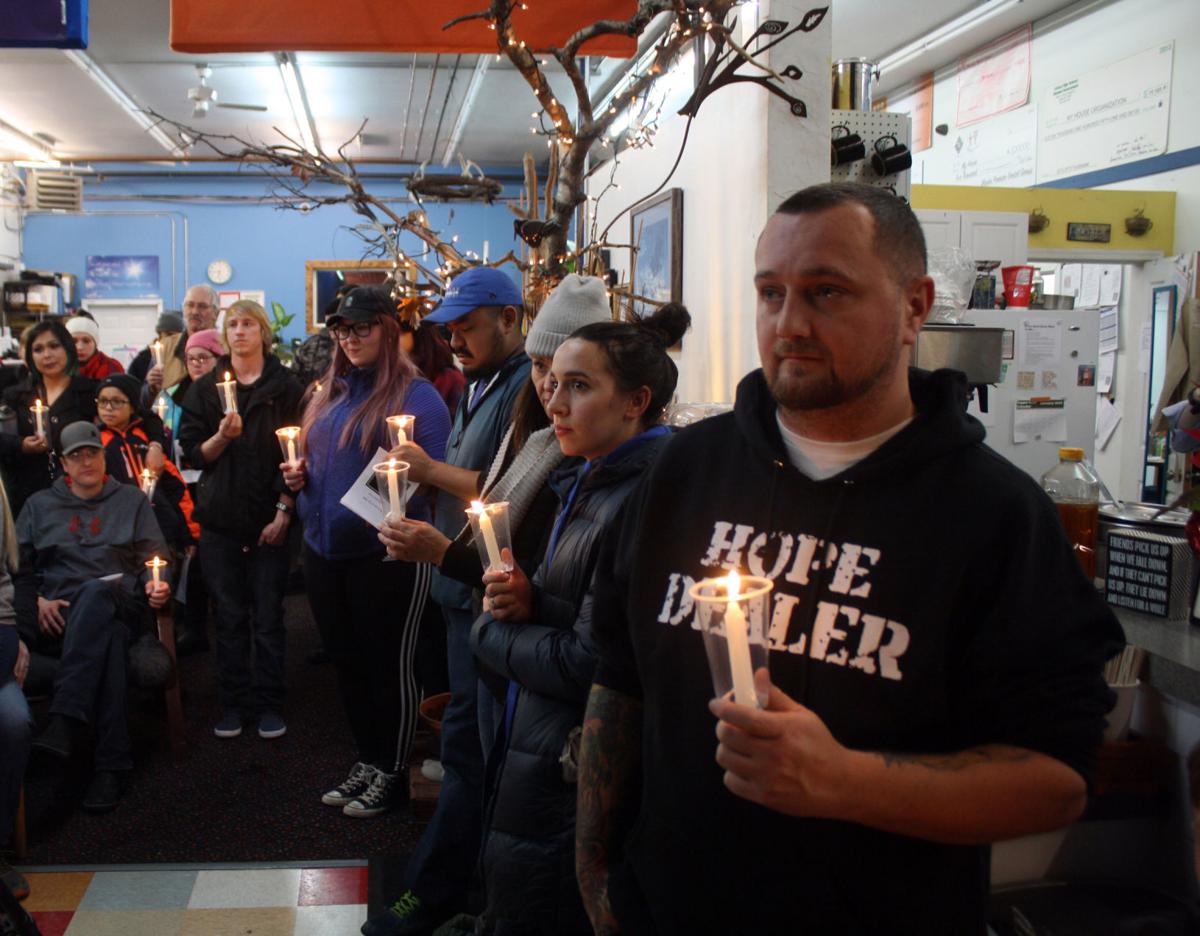 True North Recovery founder Karl Soderstrom, right, and a wave of emotional attendees hold their candles in the name of local lives lost to addiction.

Event founder and MyHouse board member John Green reads the story of how his daughter Kellsie Green died due to heron withdrawl complications in jail.

True North Recovery founder Karl Soderstrom, right, and a wave of emotional attendees hold their candles in the name of local lives lost to addiction.

WASILLA — On a dark and windy night in downtown Wasilla, the MyHouse homeless youth shelter headquarters shined extra bright against the cold winter backdrop as dozens of people held candles to honor nearly 300 local lives lost to addiction. Every name in the list was read aloud and some attendees tearfully added a few more.

“May you all rest in peace,” Founder of Real about Addiction and chair of the Anchorage Opioid Task Force Kim Whitaker said.

Despite the bitter elements, hoards of people have attended the annual Candlelight Ceremony each January since its inception four years ago.

Vice president of Fallen Up Ministries Mark Weaver opened the 2020 ceremony with a group prayer Jan. 10, the same date event founder John Green found out his daughter Kellsie Green died in prison due to health complications from heroin detox.

“We all have our journey through this grief… The truth is there’s no way of planning ahead for something like this… We did our very best with what was available to us. What we all have equally in common is the knowledge of and the memories of who- our name on this list- was and is,” Green said.

Green said the high and growing attendance shows their goal of breaking down the stigma of drug and alcohol addiction is working.

“It just shows people are feeling more opened up and comfortable to show up,” Green said.

Attendees normally gather around burn barrels and brave the cold with their candles. Due to high winds, that was different this year. The ceremony was held indoors for the first time instead of the usual spot across the street at Nunley Park, but the outcome was the same.

“We can’t control the weather in Alaska, that’s for sure,” Green said.

It was a somber and emotional evening. It was a safe and stigma-free place for families and friends who’ve lost their loved ones because of addiction. It was a place for grieving and a place for healing.

That’s exactly what Green had in mind when he started this annual tradition in memory of his late daughter Kellsie and all the other local lives lost in the throes. He said it’s been part of his healing process and hopes it helps other people heal as well.

“It’s about getting the awareness out there, creating a fellowship…” Green said.

True North Recovery founder Karl Soderstrom was one of several guest speakers present this year. Soderstrom learned first hand that recovery is possible and gatherings like these help everyone realize there’s still time to reach those who haven’t been lost yet.

“Addiction is treatable. We have solutions. The solution is in this room,” Soderstrom said.

There were plenty of teary eyes and hugs present that evening. MyHouse founder and executive director Michelle Overstreet was one of the speakers and she was visibly emotional during her talk.

“You’re going to hear a list of names that’s going to bring you to your knees… you have to understand that if love were enough to keep a person alive they would still be here with us. It doesn’t mean you didn’t love them enough. It doesn’t mean we should have done something differently or didn’t care enough… It just wasn’t meant to be and we have to be able to go on and hold that flame and hold that passion for ourselves and our community and keep going forward and saving lives,” Overstreet said.

Overstreet noted how nice it was to see several familiar faces in the recovery community who initially worried her turn into success stories and part of the solution. She said seeing so many people in long term recovery in their building was an “answered prayer.”

“There are so many people in this room that I knew when they were using and you scared me because I thought we were going to lose you, and some of you know who you are… It’s so hard to bury somebody when you see that light in them and they can’t find it. Don’t give up on people. Stay with them. Walk with them. I know it hurts sometimes but you have to hold the flame for them and believe in them until they can believe in themselves,” Overstreet said.

The speakers read off the names of nearly 300 local lives lost to addiction. The room was very still and very silent as the names listed off.

Local pastor Rick Cavens has been a staple guest speaker for this event for several years. He said that he wasn’t there to represent his church or any particular sect but he was there to represent the people affected by this disease.

Cavens recalled an anecdote from one year toward the end of the ceremony when an attendee requested they sing “Silent Night” which was past the holiday season but just in time for the true meaning of the song: family. The song was composed in an 1800’s war-ridden Europe.

“Christmas is here. Christmas is the people here. That song was really written because people were really wanting that sense of family,” Cavens said.

The whole room sang “Silent Night” together and the wind howled outside, blowing snowflakes to and fro.