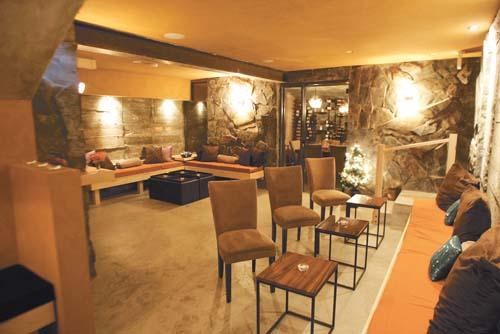 ROBERT DeBERRY/Frontiersman A converted basement reminiscent of a Napa Valley wine cellar has a warm and inviting feel. 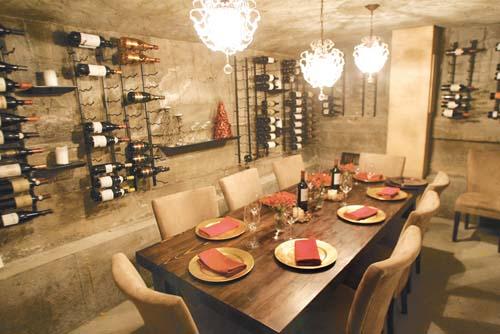 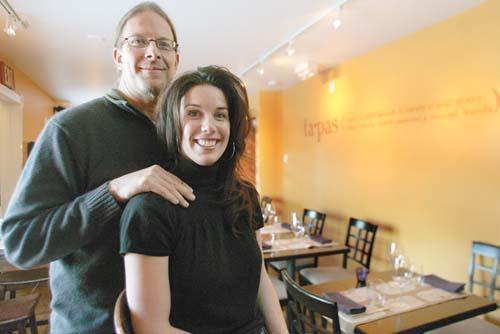 ROBERT DeBERRY/Frontiersman A converted basement reminiscent of a Napa Valley wine cellar has a warm and inviting feel.

Tapas, small plates eaten over multiple courses, “promote a kind of dining that encourages community sharing. You are sharing not only what you eat but your time as well,” co-owner Skip Hrin said.

Partner Kelci Hatcher said they wanted a communal feeling for the wine bar originally planned for the building on Boundary Street. As the menu mushroomed, tapas allowed them to keep this sentiment.

“People are talking about their wine and food together,” Hatcher said. “That’s exactly what we want.”

With rich colors, a painted fresco and a converted basement reminiscent of a Napa Valley wine cellar, this is no place to eat and run.

And the menu gives diners plenty to ruminate over.

The fare seems more suited to a culinary mecca such as San Francisco, no doubt due in part to the owners’ background in California’s Bay Area.

Tired of the congestion, the couple moved to the Mat-Su in 2001.

“The Valley is more our style than Anchorage,” Hrin said. “Plus, our trailer broke when we came to Palmer.”

Hrin soon set up shop in the mental health field, and Hatcher began working in real estate appraisals. While they both still have those jobs during the day, their hours have taken a hit ever since they started this “all-encompassing side project,” as Hrin called it.

Hatcher said The Grape Tap came about when they saw a void in the Mat-Su.

“We wanted to share the wine bar atmosphere with the Valley. It was something we felt was lacking and something the Valley was ready for,” Hatcher said.

Once they found the chef to make their appetizers, Pat Mathias, the couple said they knew they had stumbled on to something more.

“It felt like we were holding back a thoroughbred,” Hrin said. “The food is now the anchor.”

Hatcher explained that Mathias was an experienced gourmet chef who previously owned her own restaurants in the Florida Keys and Charleston, S.C. She most recently worked at the Motherlode Lodge at Hatcher Pass.

With dishes like fig and goat cheese bruschetta and seared ahi tuna, it’s clear the owners made the right decision and the menu offers a level of food sophistication not previously available in Wasilla.

But that’s not to say the menu has only gourmet offerings. For the more traditional, The Grape Tap offers pizzas and food from the grill, like pork sliders and Southwestern shrimp quesadillas.

“It’s amazing the care that (Mathias) puts into the food. Everything is made by hand in our kitchen,” Hatcher said.

The expanded menu certainly does not mean the wine and beer offerings suffered. While Mathias takes care of the food, Hatcher picks the wine and Hrin selects the beer.

“We try to stay away from larger names you can get anywhere,” Hatcher said, explaining her wine selection philosophy. “We look for something made with care. With that usually comes something made by family-owned wineries.”

From the beer menu, it’s clear Hrin has a proclivity for Belgium-style beverages.

However, he has added balance, and the menu offers six beers on tap plus a rotating selection of bottles drinkers will be hard pressed to find anywhere in the Valley.

“People who are knowledgeable about beer can do some really good pairings. But people who just like good beer will find something they enjoy,” Hrin said.

In an effort to offer something new to both first-time diners and the regulars, Hatcher said the offerings are always fresh.

“Our menu and wine and beer lists don’t get too stagnant,” Hatcher said. “We actually might change it too much for some people.”

The restaurant that opened in June has relied on word-of-mouth marketing. With the comment box full of 500 cards speaking mostly praises, Hatcher said this method has worked very well.

The Valley, which one might think would not respond too well to smaller portions of gourmet food, has embraced the philosophy offered up by The Grape Tap.

“After you eat, you are not over-stuffed and you are not taking to-go boxes home,” Hatcher said. “But, the plates are clean and diners are full.”