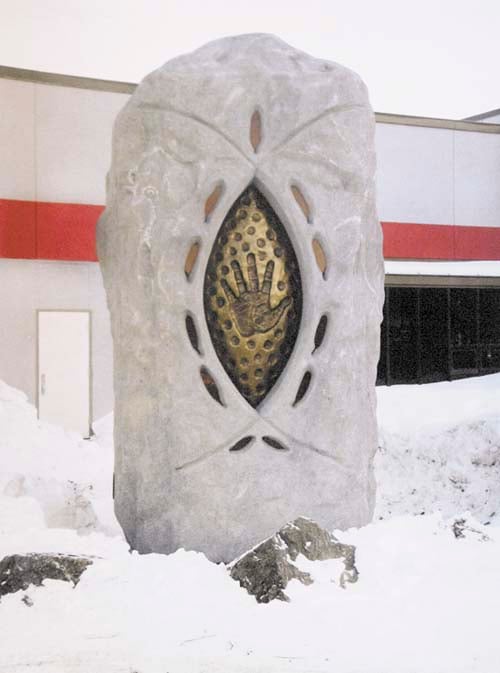 This sculpture titled ‘Warrior Within’ was installed at Wasilla High School Jan. 29, but has been covered since Feb. 1 after some students and parents complained it resembles female genitalia. 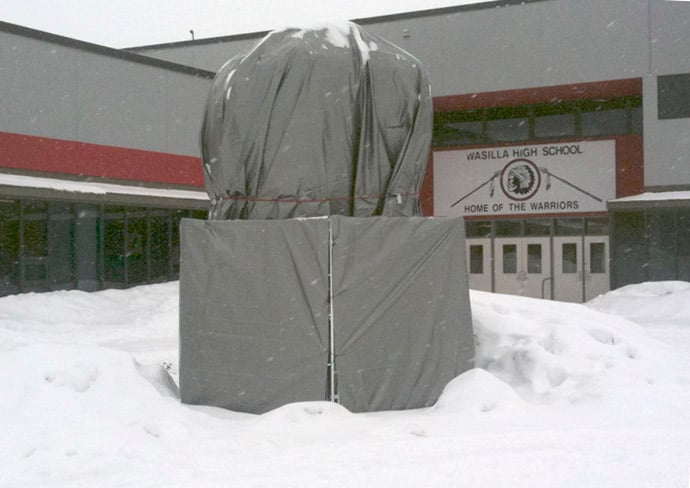 The 'Warrior Within' sculpture sits covered in front of Wasilla High School. (HEATHER A. RESZ/Frontiersman)

This sculpture titled ‘Warrior Within’ was installed at Wasilla High School Jan. 29, but has been covered since Feb. 1 after some students and parents complained it resembles female genitalia.

The 'Warrior Within' sculpture sits covered in front of Wasilla High School. (HEATHER A. RESZ/Frontiersman)

WASILLA — Jim Dault and Shala Dobson are proud to display their artwork at Wasilla High School. After all, the Meadow Lakes artists are Valley residents and have a familial connection with the school.

That’s why Jan. 29 was an exciting day, Dault said. That’s the day they installed their sculpture “Warrior Within” in front of the Mat-Su Borough School District’s largest high school. Three days later, however, the $100,000 work of art, contracted through the state’s Percent For Art Program, was covered by tarps and has remained under wraps since.

The reason? Some students think the stone and concrete sculpture that features a pair of shields surrounded by feathers resembles female genitalia. The oblong shields, one made of aluminum and another of bronze, are emblazoned with warrior symbolism, the artists say in a description of their project.

“Emerging from the powerful stone form are two warrior shields encircled by glowing feathers,” the description says, adding the art is a monument to the warrior spirit. “The bronze shield has a hand impression showing ‘good deeds.’ The aluminum shield has a flame symbol representing the ‘spark of inspiration.’ The stone form represents the strong material from which a warrior is made.”

That’s the message the artwork conveys, Dault said, and he and Dobson are now working with the school to help educate students and parents about the art and its ties to Wasilla High and its Warrior mascot.

Before installation, the work was fully vetted by a Percent For Art Program committee and approved by the school district before work began, he said. The Alaska Legislature passed the Percent for Art in Public Places statute in 1975, which created the Percent For Art Program, that requires the expenditure of 1 percent of the capital construction costs of public buildings for the acquisition and permanent installation of artwork.

“People need to slow down,” Dault said about the brouhaha. “It’s a sculpture. It needs to be experienced up close, personally, because it is in three dimensions.”

For Wasilla High School Principal Amy Spargo, she said she doesn’t view her decision to cover the sculpture as censorship. After receiving complaints from students and parents, she decided to revisit the issue of whether the art is best suited for display at a high school. Also, she said she is worried that vandals might damage the artwork.

“The hubbub started since the piece got delivered,” she said. “There was quite an outcry from parents who were hearing what kids were saying (about the sculpture). My concern was the piece would be damaged. Clearly, we needed to do some education. There was such a disconnect from the piece and the (school), I just wanted to re-engage the public process.”

That disconnect, she said, is partly because two of the main players on the committee are no longer at the school. Spargo said she plans to convene another committee that includes students, parents, staff and school administration to examine the art project. Also, the artists will give a presentation at the high school Feb. 24 to educate students about the symbolism in their art.

“I have a problem with the lack of public process,” she said. “It’s a high school, and the one-liners (poking fun at the situation) abound. We have to back up a little and be more purposeful about our conversation.”

Jocelyn Young, state curator for public art in Anchorage, stands by the public approval process used for all Percent for Art installations. Although Young’s focus is on the Anchorage area, she said she frequently helps the local school district with its Percent For Art projects. She said the committee that approved “Warrior Within” relied on feedback from students, parents and the school board.

“It was vetted and went through a process,” Young said, adding that making another committee to examine the issue won’t produce the same results the state art program intends. “A new committee will be a Wasilla High School committee and no longer a Percent For Art committee. They have chosen a route that is going to be much more difficult in terms of trying to get lots and lots of input.”

Spargo said no decisions have been made about the future of the artwork. It could be left where it is, could be moved to another location on the school’s campus or be removed entirely.

Whatever the decision, Young said she’s concerned about the precedent Wasilla High School’s actions could set.

“Warrior Within” is Dobson and Dault’s 10th work of art produced through the Percent For Art Program, and they’ve never had a problem with one of their pieces before, Dault said.

And while Spargo says she doesn’t view covering up the sculpture and making another committee to examine the artwork as censorship, the Palmer Arts Council disagrees, said Howard Bess, a Valley community activist and PAC board member.

The council’s board of directors convened an emergency meeting to discuss the Wasilla High art issue Wednesday, Bess said, and the PAC wants to meet with Spargo before taking any formal action. The council’s message to the principal will be clear, he said.

“We do not believe that there are any circumstances that justify the covering of a piece of public art,” he says in an email sent following Wednesday’s meeting. “It is unfortunate that this particular piece of public art was covered, no matter what the motives might have been.”

Prior to that meeting, Bess said he’s also concerned about Spargo’s leadership and handling of the controversy.

“If I were in that position of hearing threats that people would deface art, I would never be intimidated by a threat,” he said. “If it was a student and I knew who the student was, that student would be immediately suspended. I would never bow to any kind of threat from a student. Society cannot tolerate threats, you can’t.”

Spargo said she welcomes all opinions to the debate, but those who cry censorship “never had to run a school before. This is my judgment on how to move forward. The artists have been delightful people, they’re wonderful professionals, they delivered what the contract says. … But the (negative) response was large, and it was pretty consistent that there wasn’t a lot of appreciation; however, I don’t think there was any prep work on my part to prepare the student body for it. It’s a great concept about thinking about what it really means to be a warrior.”

As artists, Dobson and Dault say they have a fondness for the Percent For Art program, Dault said. Dobson also has been a teacher for 24 years.

“We poured our heart and soul into that piece, worked on it for nine months,” he said. “We are proud, and I think there needs to be some time spent with it, as with any piece of art.”