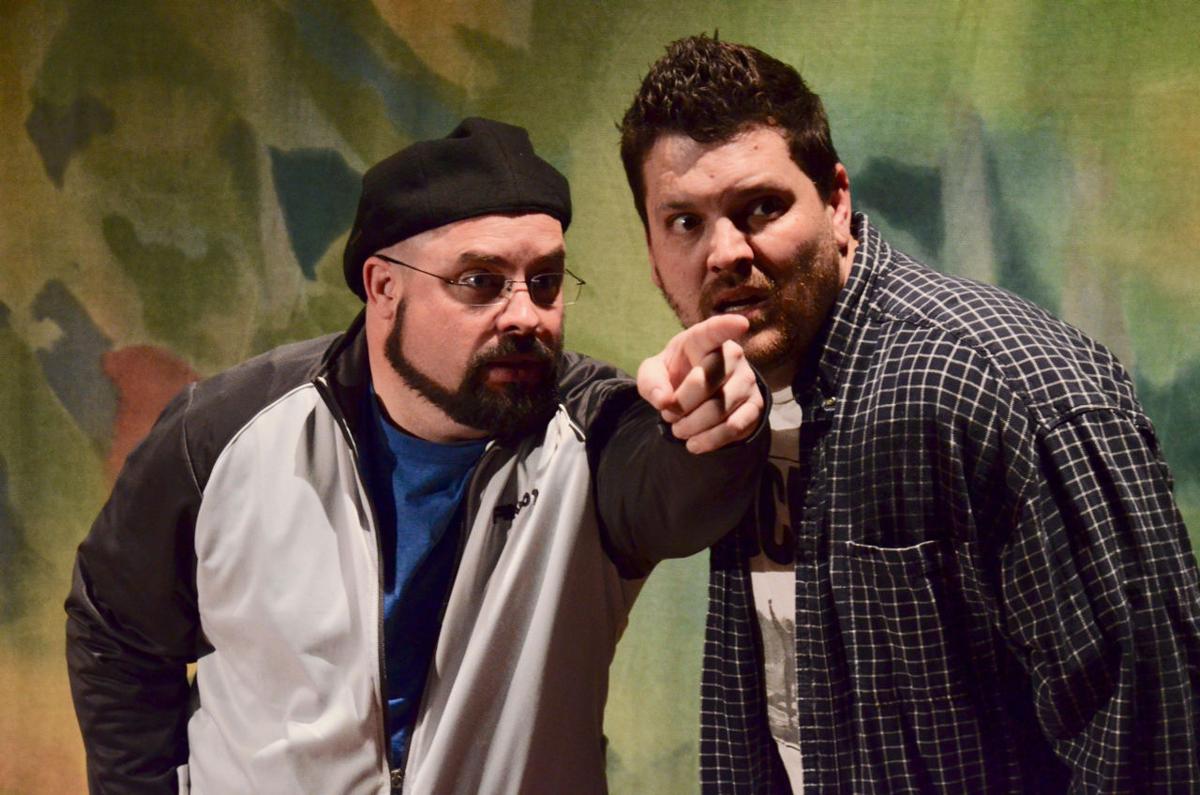 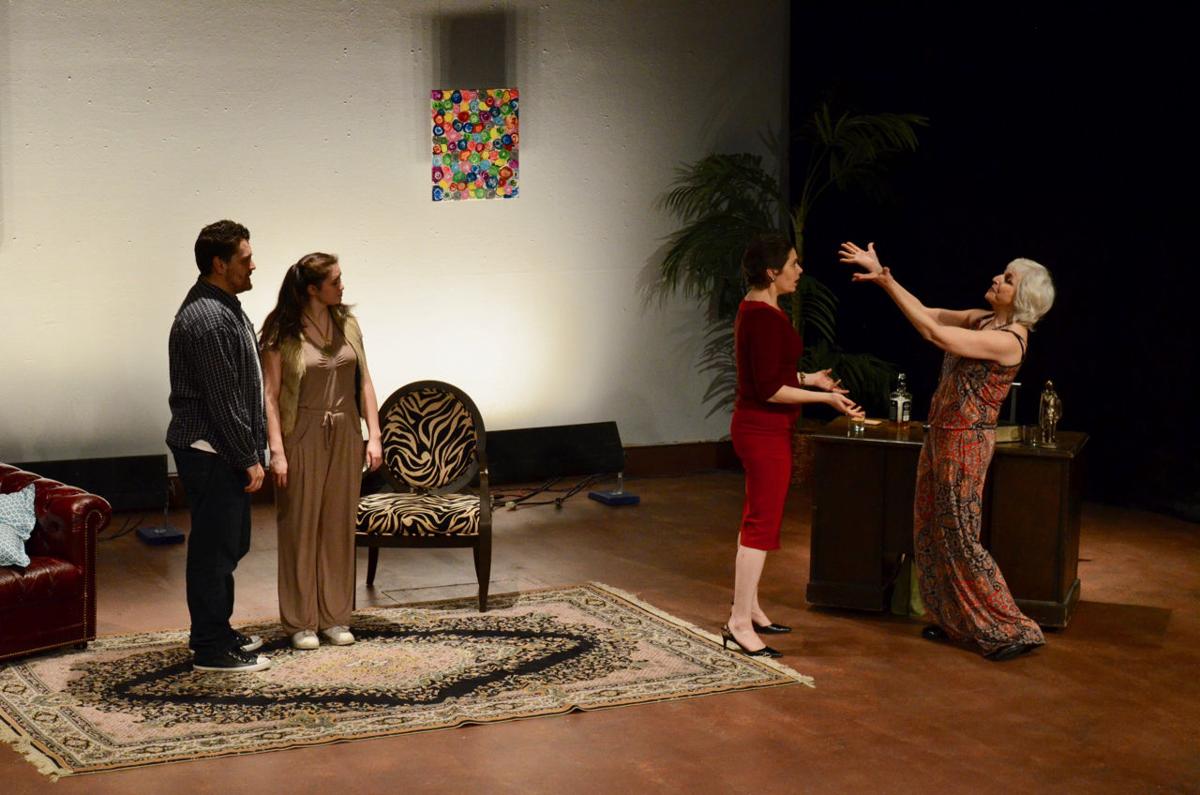 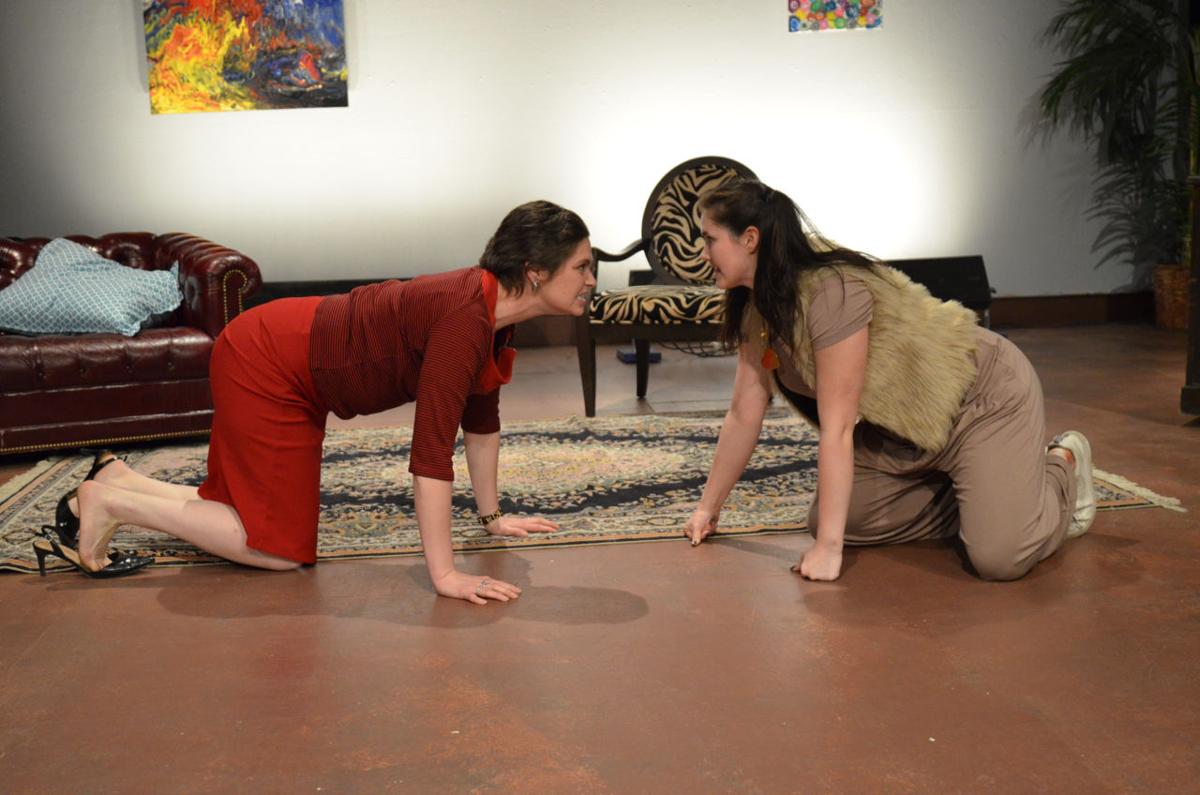 WASILLA— The Valley Performing Arts had a successful opening weekend for their take on the classic comedy, “Sylvia,” a love story gone to the dogs. Directed by VPA veteran, Grant Olson, Sylvia should leave audiences in stitches as they watch a family sanctum disputed by a furry guest.

“This is about a good of comedy that you’re a you’re going to get at VPA,” Olson said.

This is Blackwell’s third time acting with VPA. The intrepid teen turned 18 and managed to squeeze in prom between shows in the season finale for the Wasilla-based theater company.

The starring actors include Blackwell as Sylvia, D.J. Rotach as Greg, Tracy Jones as Kate, Clint White as Tom, Cynthia Lee as Phyllis and Deborah Patrick as Leslie.

The play follows the story of a married couple, Greg and Kate, who are moving to Manhattan after 22 years of raising children in the suburbs. The couple’s careers are at opposing crossroads, with Greg’s work as a financial trader winding down while Kate is finding more opportunities as an English teacher. One day, Greg brings home a dog he found, or, rather “that has found him.”

The streetwise Labrador and Poodle mix came to Greg with the name Sylvia on her name tag. Kate is not thrilled with Greg’s hairy companion. Her jealousy exuberantly festers and grows through the course of the play, plainly evident to the audience, thanks in no small part to Jones’ performance, according to Olson. Jones thrived in more somber plays like “Jane Eyre” and “Who’s Afraid of Virginia Woolf?” Olson said that she took her skills over to a comedy beautify, playing emotional driven scenes with prowess.

“She was really nervous about doing a comedy but she’s really good at it,” Olson said.

Rotach’s chemistry fed into Jones’ performance with streamlined potently, packing that comedic punch and familiar resonance according to Olson. The dog proves to be this man’s best friend while proving to be a martial wedge and comedic source of tension.  A dog’s “unconditional love” is put to the test in this funny, yet thought-provoking play.

“I’ve actually used my Miniature Schnauzer as a consultant for this show,” Olson laughed.

The story shines a light on a strained marriage and emotional journey that ensues between them and the dog in between them, serving as angst and jealousy for one and therapy and companionship for the other.

“Sylvia is the cause of [Greg’s] problems but also relieves his stress,” Olson said.

Olson admitted that he is in the twilight of his career in theater. Since 1980, he’s acted and directed in dozens of plays in the Valley, Anchorage and beyond after getting his M.A. in theater from the San Francisco State University in his younger and more vulnerable years.

“I’ve slowed down a bit. It’s been a while since I last acted,” Olson said.

Olson noted that after his longtime friend collaborator, Larry Bottjen retired after the massive, record-breaking release of Mary Poppins at the Glenn Massay Theater, he wanted to work on an almost “antithesis” of the huge, brightly colored musical, producing a minimalistic, yet poignant play at the home base.

“I was always picking plays I liked,” Olson said.

Olson said that he and Bottjen have a mutual respect for each other, in spite of some creative and stylistic differences.

“I really like Larry and he’s been nice to me,” Olson said.

They have collaborated with several projects over the years. Olson marveled at his ability to pull in hefty crowds.

“Larry shot the moon with Beauty and the Beast…” Olson said.

With Bottjen retired from VPA, Olson remains as one of the longest standing members. He directed the VPA’s rendition of ‘Fiddler on the Roof’, one of the smash hits of their lengthy history. His first VPA play was “God’s Favorite” by one his favorite writers, Neil Simon.

“That’s when we had a real dinky theater,” Olson said.

Olson’s theater obsession began when he was a Cub Scout, performing original skits for the den. He debuted into acting as Tom Sawyer in his sixth grade musical. He looked back on his formative times with the VPA community theater, even before they built their Wasilla venue. He said that he tried to keep his “hand in everything” around the stage. “The paint was drying when the audience came in,” Olson revered.

“I’m not a youngster anymore so I want to make sure I end up doing things I really like. I just like really good theater,” Olson said.

Olson has been involved with over six dozen plays in his lifetime. He’s even met several big name celebrities along the way. On top of acting and directing several local plays, Olson wrote numerous originals that he either directed or gave the reins to another VPA veteran. He isn’t done writing. He’s finishing the last pages of his dystopian novel.

“Gosh, they’ve done a lot of plays, haven’t they?” Olson said, as he peered through the VPA’s overarching production timeline.

He hopes to leave the Valley audience with a lasting impression, long after they watch it.

“We have little flashes moments in time, where people remember what they saw on the stage,” Olson said.