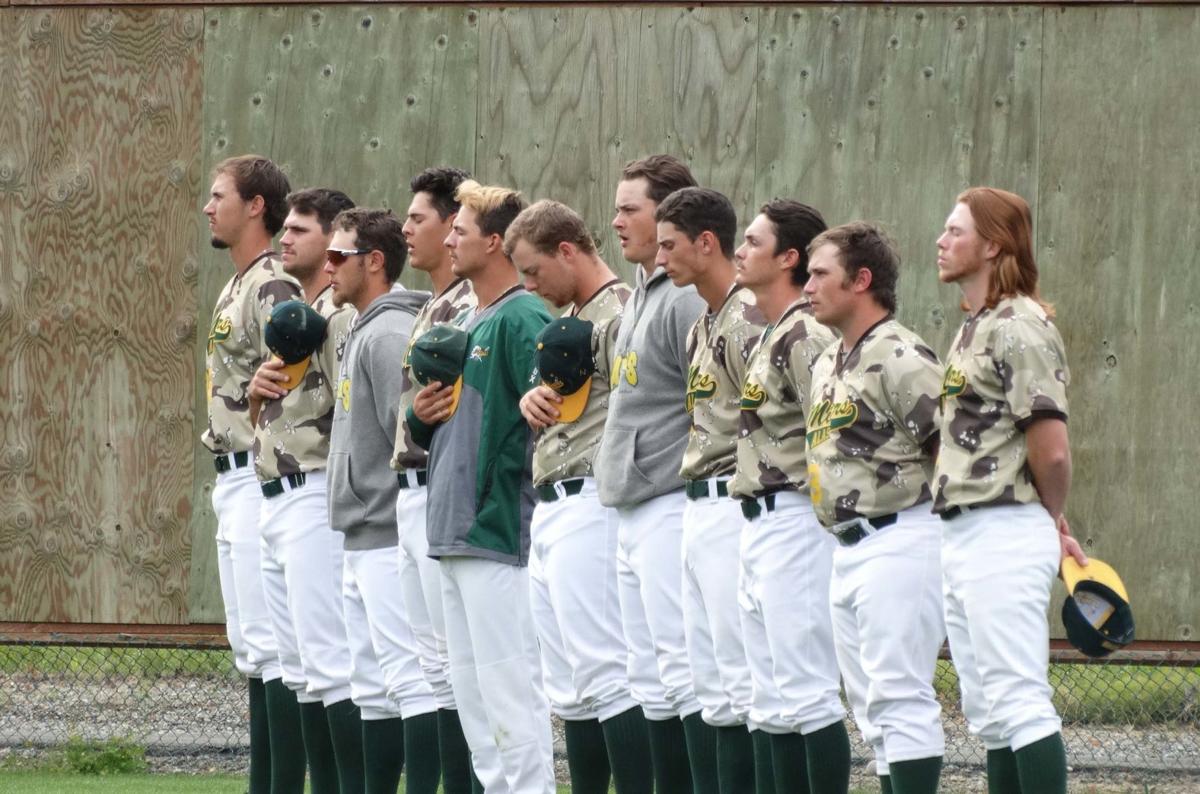 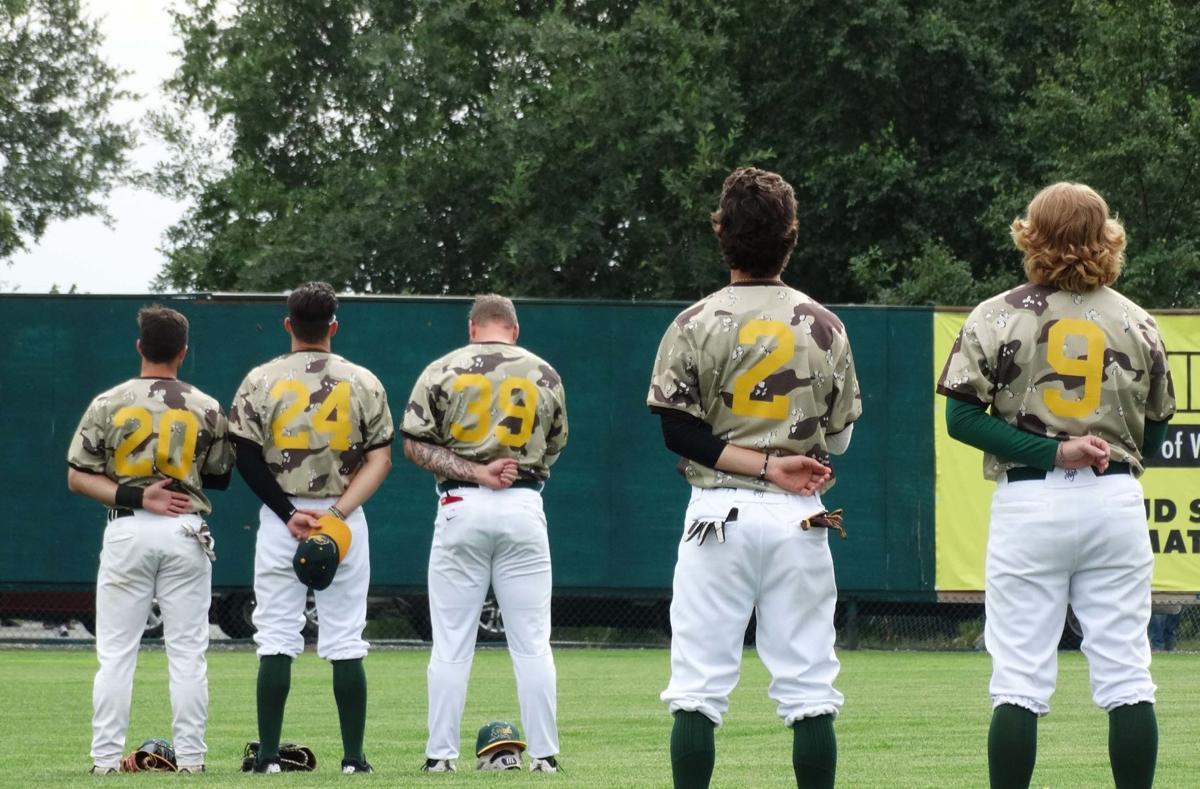 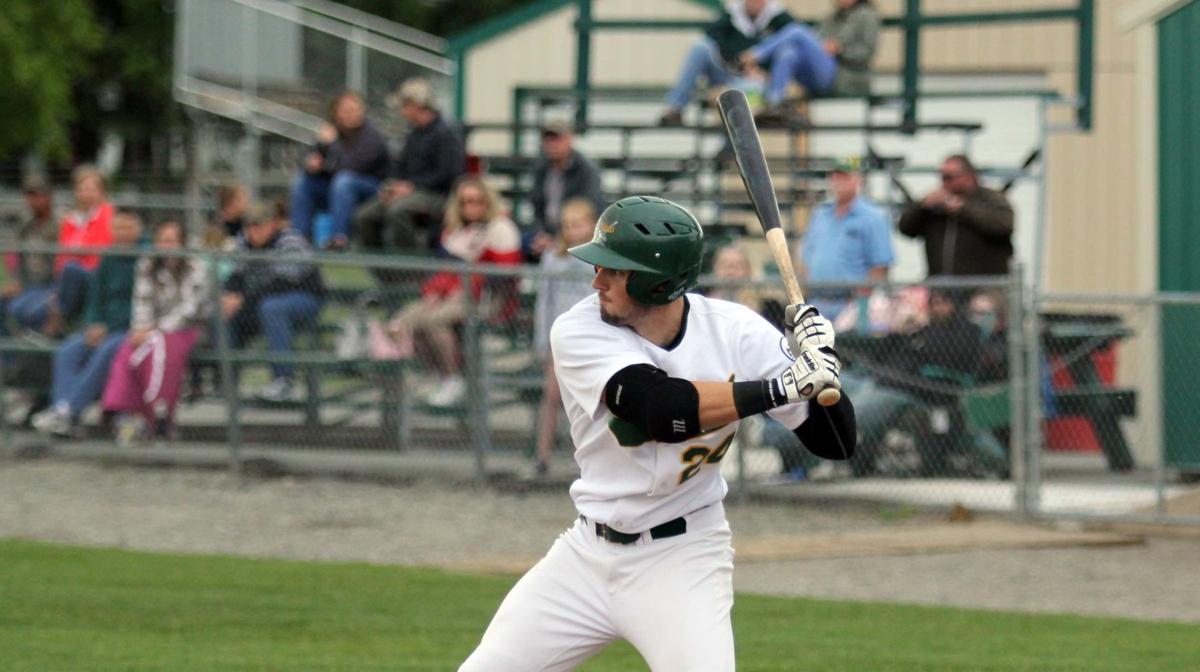 Mat-Su Miners outfielder Kona Quiggle, seen here during a game against Chugiak, hit a single and a home run during a 17-1 win over the Peninsula Oilers Tuesday at Hermon Brothers Field in Palmer. 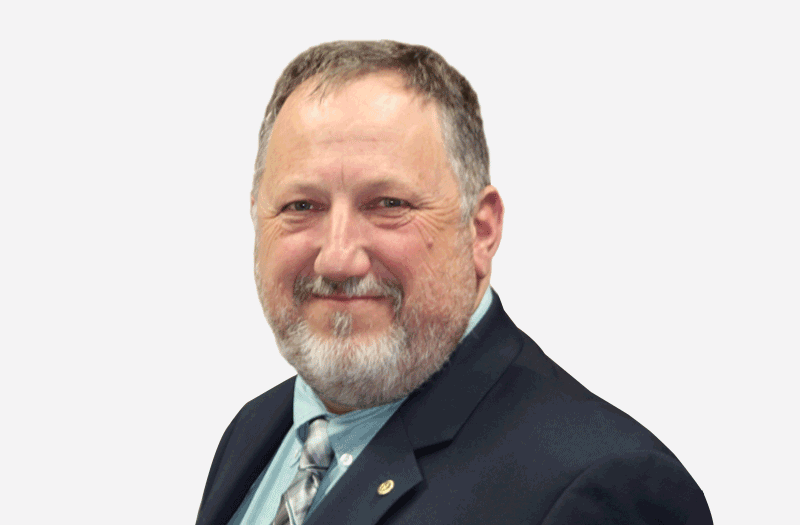 Mat-Su Miners outfielder Kona Quiggle, seen here during a game against Chugiak, hit a single and a home run during a 17-1 win over the Peninsula Oilers Tuesday at Hermon Brothers Field in Palmer.

Laurie Vandenberg and her mother attended the Mat-Su Miners game Saturday in Chugiak.

As the National Anthem was played they became offended that Kona Quiggle, a standout player for the Miners, didn’t place his right hand over his heart. After the anthem was played they approached Miners General Manager Pete Christopher and Terry Johnson, the Vice President of the Mat-Su Miners Board of Directors. Vandenberg’s mother told the duo that she lost a relative in Vietnam and honoring our flag was something personal with her. Johnson empathized and shared with her that he also served in Vietnam and lost many friends over there. But he relayed to her that he didn’t see anything wrong with how the Miners players presented themselves during the anthem. Later a second and more-lengthy conversation ensued. Johnson explained to her that at times he doesn’t place his hand over his heart because he was taught during his service that when military personnel are out of uniform they are to stand at the position of attention or parade rest.

“The daughter told me, you don’t have a problem with the way he (Quiggle) honors the flag. I told her, no I don’t. She then said, well, we’ll see what Facebook has to say about that,” Johnson said.

Vandenberg that night posted the incident on the Facebook page Mat-Su Valley News. It drew more than 300 comments some in support of Vandenberg’s position drawing comparisons to the NFL players kneeling during the National Anthem. Others discussed proper etiquette.

Later when Quiggle left the dugout for a restroom break Vandenberg confronted him.

“She came at me kind of strong and said, You don’t know how to put your hand over your heart?” Quiggle recalled in our interview.

“Sure I do”, he replied to Vandenberg.

“Obviously you don’t during the anthem.” she retorted.

“She compared me to the NFL and how they kneel and brought up what Donald Trump said about the players.” Quiggle said.

Quiggle told Vandenberg that his dad was a Marine and that this is the way he was taught. He asked his dad how he should stand during the anthem, but Quiggle had an experience in high school that is the reasoning behind why he stands during the National Anthem as he does.

Quiggle was standing at parade rest as he has done every time since he played in a baseball game at Greenway High School in Phoenix, Arizona. This particular night during his senior year his team honored a former Greenway student and baseball player, Tyler Prewitt. Prewitt was killed in Iraq on September 28, 2004, while serving as a medic in the U.S. Army.

“His mom came out and we had this big thing for him. That night which was called Tyler Prewitt night, they (members of the US Army who attended the ceremony) taught us that we don’t put our hand over our hearts. They said to stand at attention with your hands behind your back,” Quiggle said.

Quiggle has fond memories of that night. The team had a batter’s helmet they decorated for Prewitt. The leadoff hitter used it and hit his first home run.

“It was pretty cool. There’s a Facebook video of it,” Quiggle recalled with a smile on his face. “So yeah that’s what they taught us that night and I’ve been doing it ever since.”

Quiggle doesn’t believe there is a controversy.

I asked Quiggle some pointed questions that he gave direct answers to. I asked him if he was protesting anything?

Do you love this country?

Are you grateful for everything this country has provided for you?

“Of course” he said.

For Mat-Su Miners head coach Ben Taylor there is no controversy. I asked him if he has an expectation for his players during the National Anthem.

“Yeah, our guys are to be standing at attention, standing straight and standing still like they do every night.” Taylor said.

As far as policy the players do what they do at their schools.

“Like the (Texas) A&M guys they put their thumb up on their back, but no the rule is that they are to stand straight and honor the song and honor the flag,” Taylor said.

Quiggle comes to the Miners from Grand Canyon University.

“Yeah he comes from Grand Canyon University which is a private Christian university. He’s a fantastic player. He’s one of the best players in the league for us. He’s awesome.” Taylor stated. Quiggle is on the Major League Baseball’s radar as a draft prospect. In 2016 Kona Quiggle made MLB.com’s most unique names to say in the draft list. Taylor doesn’t believe this controversy will affect his draft status.

“I don’t think so, that was more of a case of someone expressing their views.” Taylor said.

But for the Miners it’s a little bit different.

“I think anytime you put an organization that is community involved and community based around positivity and you shine a dark or negative light on it, I think it hurts. Because you don’t want bad attention drawn to something that is so good,” the sixth-year head coach said.

For Terry Johnson the controversy touches a raw emotional nerve. When he returned from his tour in Vietnam and walked through the San Francisco airport he heard all the negative comments and was spat on for his service. For Johnson this incident has brought back memories of those days. He feels as though he is being accused of not honoring the flag because he doesn’t always put his hand over his heart.

“It bothered me the first night and I was hoping it was over but she posted another article so today has not been a very good day for me,” Johnson said.

Vandenberg went back to the same thread from which she posted before and attached a photo of the Miners players all standing at parade rest the next night after the original incident. They all stood as Quiggle did as a sign of unity for their teammate.

After returning from Vietnam, Johnson was assigned a TDY (Temporary Duty) on burial detail as a military escort. He escorted the remains of soldiers killed in action in Vietnam all over the country.

“Everybody that was shipped back had to have an escort. I attended quite a few funerals of guys that were killed in Vietnam. I spent many days after the funerals with the families. I still get Christmas cards from some of the families that I visited with during that time,” Johnson said.

Johnson was medically retired from the Army after he was a victim of a hit and run accident on the base he was assigned to while he was riding a motorcycle. He spent eight months in traction after suffering many broken bones and other injuries.

“I will say one thing. I lived in Minnesota and South Dakota most my life. I moved to Alaska in 2000. In those 18 years of living in Alaska I have had more people thank me for my military service than anywhere else I’ve lived. The people in Alaska have been very courteous to me and have thanked me. I have had numerous people thank me for my service and that has been a refreshing thing for me.” Johnson stated.

Miners General Manager Pete Christopher feels the whole thing was blown out of proportion by the Facebook post and comments.

“First off this women has no idea what the proper etiquette is for the National Anthem. I was Captain of the Fire Department Color Guard for 11 years when I was in New Jersey. No one has to tell me what is respectful and not respectful. This poor kid he was… he didn’t do anything wrong and she singled him out,” He emphatically stated. “We’re going to go about our business and let the chips fall where they may.”

Christopher said referring to any sponsorship issues. He doesn’t believe there will be.

“He’s a great kid and a hell a ball player.” Christopher said of Quiggle.

“I always ask the coaches of the kids we bring up if they are good kids or good citizens. I don’t need any knuckleheads and you may get one or two. We have never had a problem and if a kid took a knee during the National Anthem here. He would be on the next flight out,” Christopher said.