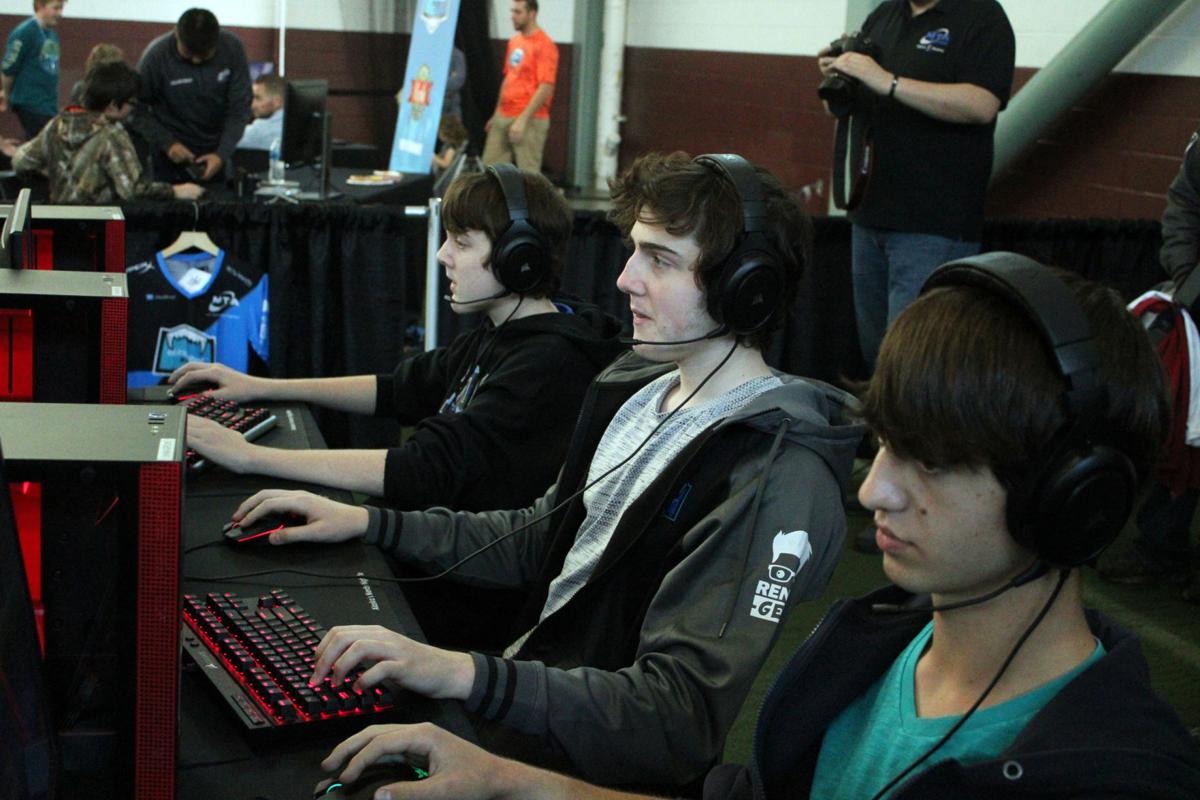 Jesse Hushower, Tobin Hushower and Sam Vanderweele compete for the Palmer High team during an esports event sponsored by MTA in October. 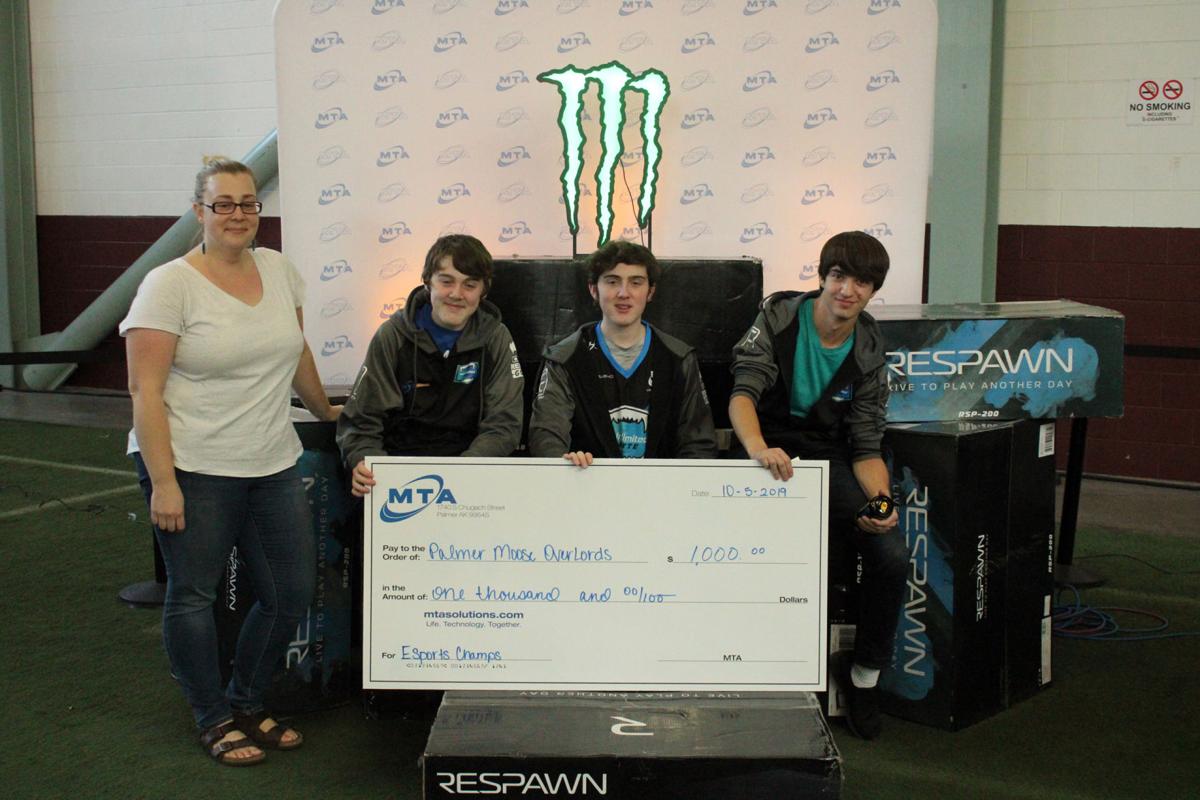 Jesse Hushower, Tobin Hushower and Sam Vanderweele compete for the Palmer High team during an esports event sponsored by MTA in October.

Nearly 500 gamers from far and wide came to participate in the largest gaming gathering in the state for bragging rights, prizes, and in the case of the Palmer Moose Rocket League team, $1,000 toward their school’s esports team. The event brought hundreds of screens, consoles and controllers to the MTA turf at the Menard Center and raged on from 10 a.m. until 6 p.m. MTA raised $2,500 for its foundation on Saturday alone through hooded sweatshirt sales form the event. MTA also hosted the first mid-season tournament for Mat-Su Borough School District Rocket League teams, reigniting a rivalry that dates back to last season.

“It makes me feel really happy because last year we came so close to winning. It makes me happy to see that we won this season,” said Tobin Hushower of Palmer.

During the 2018 eSports season, MTA and MSBSD partnered to offer esports through the Electronic Gaming Federation. Though esports was not yet sanctioned through the Alaska School Activities Association, Valley gamers got to compete on a national level through EGF. The Colony Knights won the state championship in Rocket League last year, a game where players control remote control cars as a soccer team, attempting to score on the opponent’s goal.

At the eUnlimited Gaming Tournament on Saturday, the Moose were able to even the score with a four-game sweep of the Knights. The Palmer team won $1,000 to go toward their esports team and both finalists received free jerseys from MTA.

“I think this event falls into the category of actions speaking louder than words,” said Palmer head coach Nichelle Henry. “This event was just one more way that they’ve shown that they care about the field of esports and care about students having an opportunity to engage with it.”

Gamers camped out all day in front of computers and televisions, some older than the gamers themselves. The Tekken competition was played on older model televisions because the original console iteration of Tekken features controls that are not accessible on newer models. Brackets were set out on the various games and platforms and finalists got to play on the final stage with a crowd of gamers watching and reacting to their every move.

“It’s like really cool to see like real money go into something new like esports, whereas usually Alaska is usually a few years behind in most things that come out but this is the one thing that we’re really pioneering which is cool,” said Jacob Marsh of Colony.

When ASAA chose Play Vs. as the company they would sanction esports through this year, Overwatch was removed as a game available for high school esports. Overwatch was offered at the eUnlimited Gaming Tournament, and the Palmer team showed that they had not acquired any rust over the summer. The Palmer Overlords took second place to a team called “Everybody’s an Admin.” The team that defeated Palmer in the finals features 2012 Palmer grad Jared Straight. Straight and his teammates that had assembled from all over the state were impressed with the Palmer gamers.

“One of the nice things about esports is there’s really good camaraderie among all of the schools and even in our Overwatch tournament today, they played against the UAA team and they were amazing sports. They really modeled what we hope to see in our students,” said Henry.

Brandon Meiners was on scene helping the army of volunteers coordinate brackets and execute the event. Meiners is the only Alaskan whose full time job is to coordinate esports events. Meiners grew up in Duluth, Minnesota, playing Mario and Kirby games and only played his first competitive tournament in 2013.

“Seeing the fire that people have for it, that’s what really compelled me from being a casual gamer just in my own home playing for fun to I want to be growing, learning improving, and actually involved in a competitive scene,” said Meiners.

MTA partnered with Warehouse 49, the UAA esports club and Alaska Gamers, who live streamed the event. The American Video Game League was also involved, and Meiners noted the success of the event by the amount of work it took to organize. Meiners’ favorite part of the entire event was the high school Rocket League championship.

“I remember growing up and being told by authority figures in school that gaming is not a valid thing to be following, it’s not something to pursue. Being able to have that growth happen within our events is something that’s extremely close and important to me because I feel very powerfully that there are opportunities,” said Meiners.

MTA public relations manager Jessica Gilbert grew up without live online gameplay. Gilbert honed her skills at Crash Bandicoot in Nome and hopes to bring back the classics to the event in future iterations.

All of the proceeds from the event help to fund MTA’s charitable foundation. Gilbert and Meiners were already hatching ideas for next year’s tournament, hoping to offer another opportunity for the Alaskan gaming community to come together.

“We took multiple different niche groups and communities that never interact with one another and we brought them here and they’re interacting all day and having a lot of fun and to me that’s most powerful,” said Gilbert.

Meiners said that the event may grow into a multi-day event, and that MTA will explore options for the best location to hold the largest gaming event in the state.

Jamie Hushower silently watched as his sons Jesse and Tobin and their teammate Sam Vanderweele dominated the Knights during the Rocket League series. Hushower has developed some knowledge of the games his sons play competitively and figured out when to get excited for his sons’ team. While both Tobin and Jesse play conventional sports, Jamie sees no difference in the pride he feels seeing his sons succeed.

“Whatever it is that they do whether it’s games, and in fact they both do play sports, they happen to be a heck of a lot better at video games than at sports but it’s the same level of pride either way,” said Jamie Hushower.