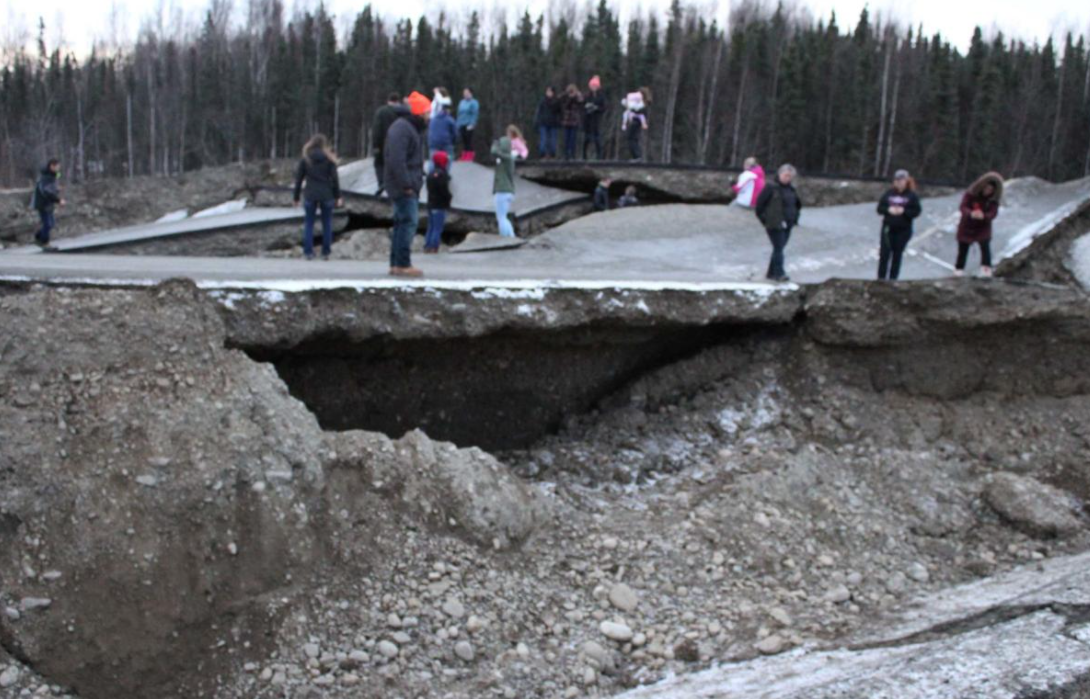 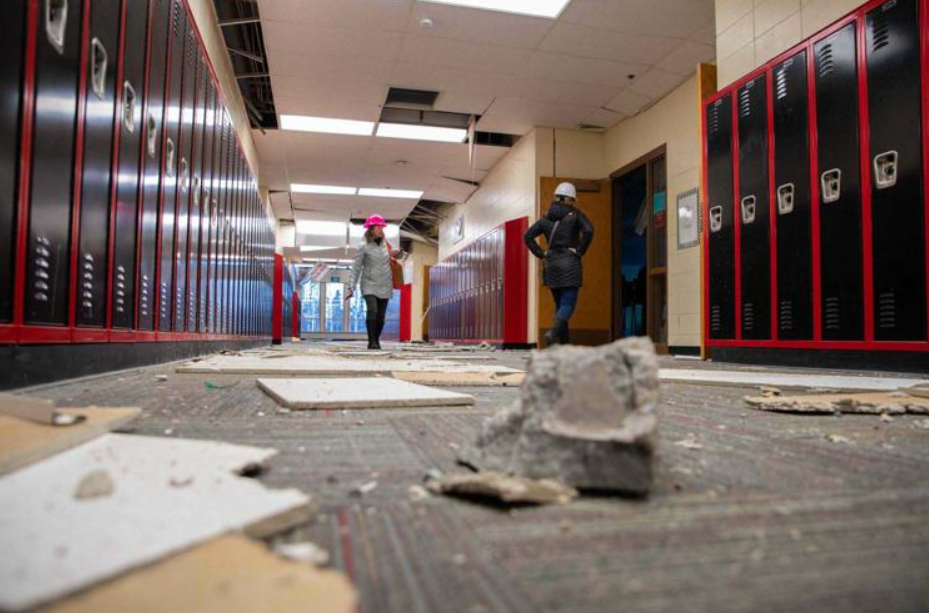 Houston Middle School has not housed students since the Magnitude 7.1 earthquake on Nov. 30, 2018.

Houston Middle School has not housed students since the Magnitude 7.1 earthquake on Nov. 30, 2018.

HOUSTON — At 8:29 a.m. Nov.30, 2018, Mat-Su Borough School District (MSBSD) Deputy Superintendent of Business and Operations Luke Fulp was driving from the MSBSD headquarters to the nutrition services along Chugach Street in Palmer when he noticed the light poles were shaking. Fulp glanced into nearby Palmer Junior Middle School to see that through the windows, office staff were taking shelter under their desks. The nearly 30 seconds it took for a magnitude 7.1 earthquake to shake southcentral Alaska did damage that still has not been completely repaired as Houston Middle School still sits idle, condemned by the Mat-Su Borough Assembly this fall to allow for a complete demolition and replacement of the building most heavily damaged by the massive quake two years ago.

“There was a level of effort that went into preparing for that type of incident. During the earthquake, we saw schools respond appropriately. We had no major injuries for any students or staff within our buildings,” said Fulp. “We saw school leaders do what they need to do to protect students and staff in that situation, so in some schools where there was more damage as a result of the false ceilings or light fixtures we saw evacuations take place. In other schools they sheltered in place.”

For nearly 30 seconds, over 18,000 students across 47 MSBSD schools shook within the buildings, and not a single major injury was reported at any of the buildings. Staff at MSBSD schools participate in quarterly trainings with the district for emergency events and yearly Alaska Shield training on a statewide level. Despite the training in place, the school district has worked to improve its ability to respond appropriately in the event of a disaster over the last two years.

“That weekend we were ordering as much ceiling tile as we could possibly get our hands on in the state to repair and replace any damaged false ceilings in our schools, light ballasts, you name it. So we were really making efforts to try to get schools into a spot where we could have students reoccupy them sooner rather than later,” said Fulp. “Since then we’ve actually taken it upon ourselves to train our facility staff in house on what needs to be included in that initial screening. That’s an AT20 screening and then the structural engineer will come in and provide a more thorough screening afterwards but at least that gives us that initial evaluation and safety assessment for the facility, so that was a lesson learned.”

As the first earthquake of many aftershocks to follow rattled southcentral Alaska, middle and high school students were in their buildings and many elementary school students were still on buses headed to school buildings. In an effort to prevent delivering children to possibly dangerous situations due to earthquake damage, each student had to be reunited with their parents at the school buildings. After noticing a problem with emergency operation plans, MSBSD emergency preparedness staff trained school staff on emergency shutoff valve protocols. Since the earthquake two years ago, MSBSD has continued training staff on how to assess damage to schools after a major earthquake event. Less than 12 hours after the earthquake in 2018, all 47 schools had been assessed by staff. Fulp also said that the necessity for more two-way radios at school sites was determined, allowing a ratio of about one radio per 25 students.

“I think it’s something that we’ll always remember,” said Fulp. “What became eerie was that we could sense an aftershock before we could feel it, so when we could hear it coming that was what I think I did not expect.”

Among the improvements to school preparedness still ongoing is advisory approval for grant funds up to $1.6 million for seismic shutoff valves that would automatically stop gas flowing to schools in the event of a major seismic event. In addition to the seismic shutoff valves that will begin being installed next summer, 12 elementary schools will replace suspended lay in ceiling tile and flexible sprinkler heads. Among the disasters that the Nov. 30 earthquake helped prepare the school district for, Fulp did not suspect that a pandemic would be one of them.

“Had we not had that earthquake, had we not had to rely on one another and figure out how to make things work and solve problems on the spot, it just put us in a better position to respond quickly this past spring,” said Fulp.

In the days following the quake, school buildings were put into color coded categories based on the damage, which has also been an informational format utilized by MSBSD in dealing with COVID-19. As the MSBSD and Mat-Su Borough worked to reorganize 13 portable classrooms throughout the district at Houston, meals were delivered to displaced students, another service that was provided by the school district at the start of the pandemic.

The MSBSD School Board will review the 95% design development of the Houston Middle School design. Now that the assembly has condemned the building to be completely demolished and rebuilt, the gymnasium was redesigned. While the gymnasium was not previously slated to be demolished and only repaired, the new gym will be rotated and expanded to allow for 1,600 spectators in the bleachers. The HMS building that has not housed students since the morning of Nov. 30, 2018, is set to be demolished later this winter.

“We lived through it, so it’s an experience that we all have together,” said Fulp. “Those types of situations bring our community closer together and they, at the school district from my perspective in the support services side, it made us very connected to the students, the schools, the mission of the district because we worked very quickly to try to bring services up and running as quickly as possible and take care of students.”