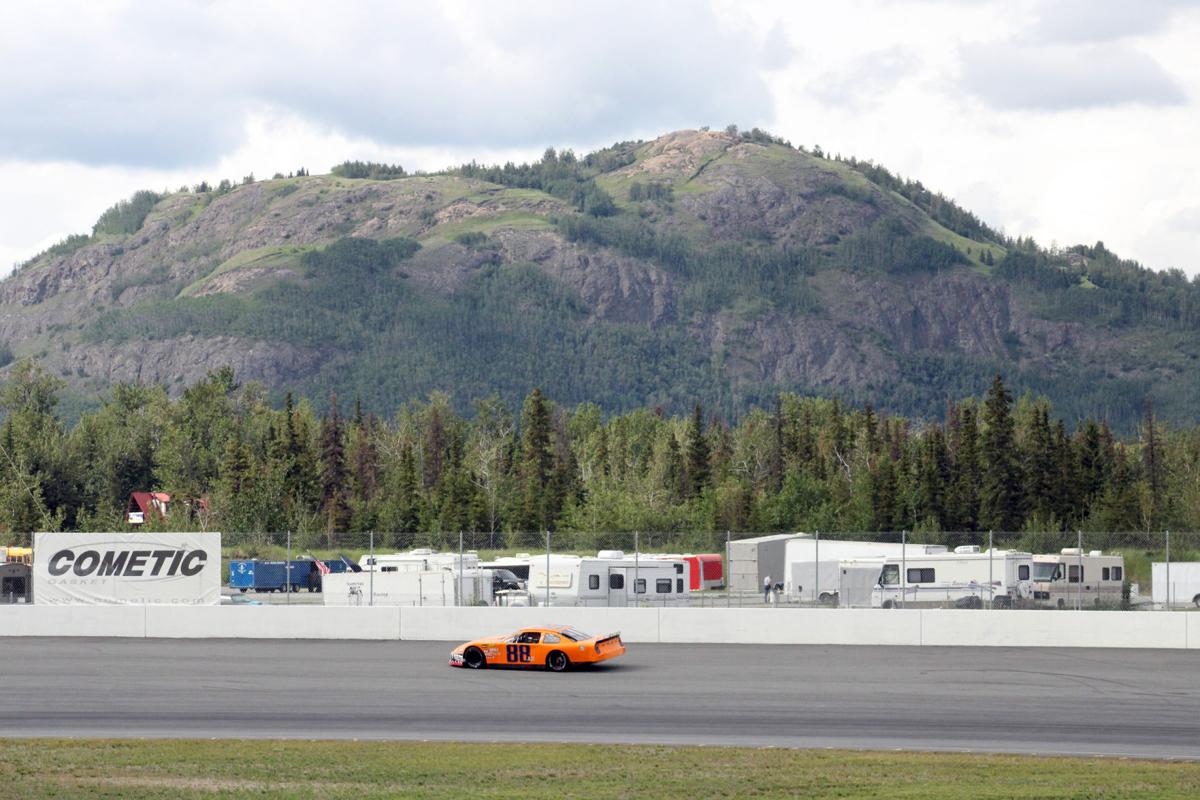 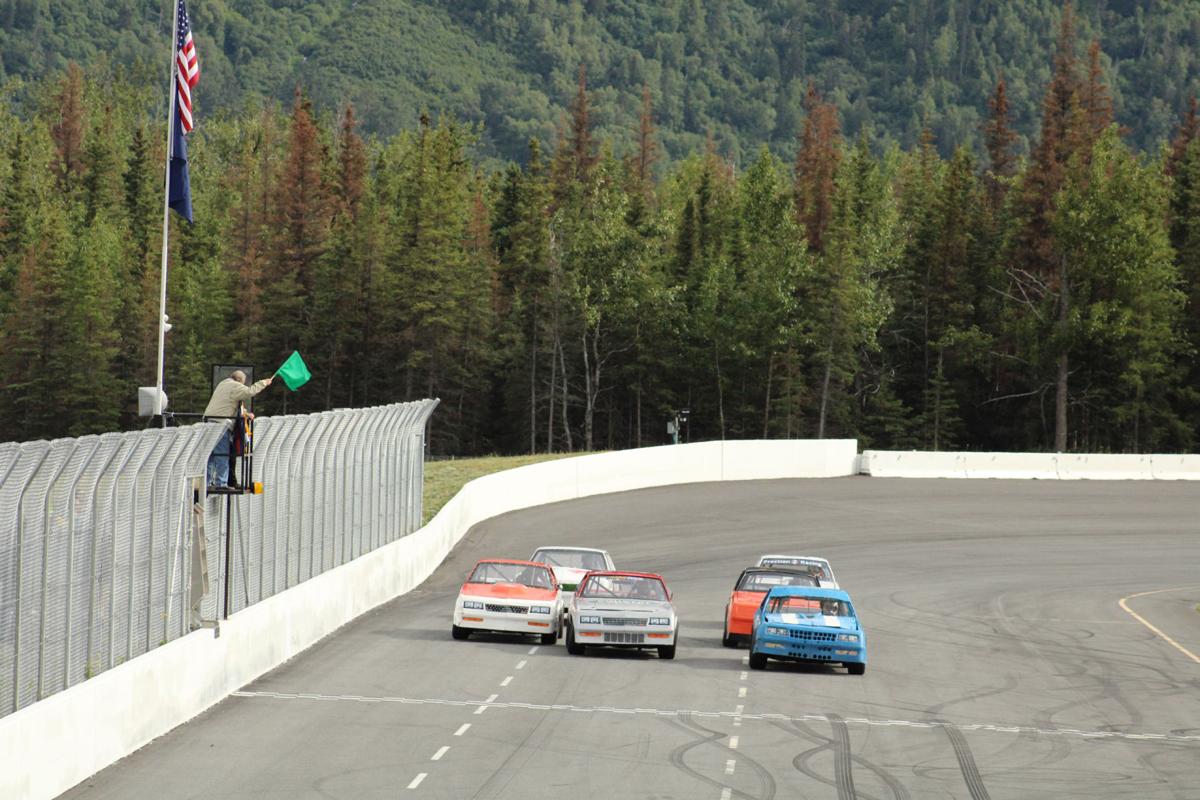 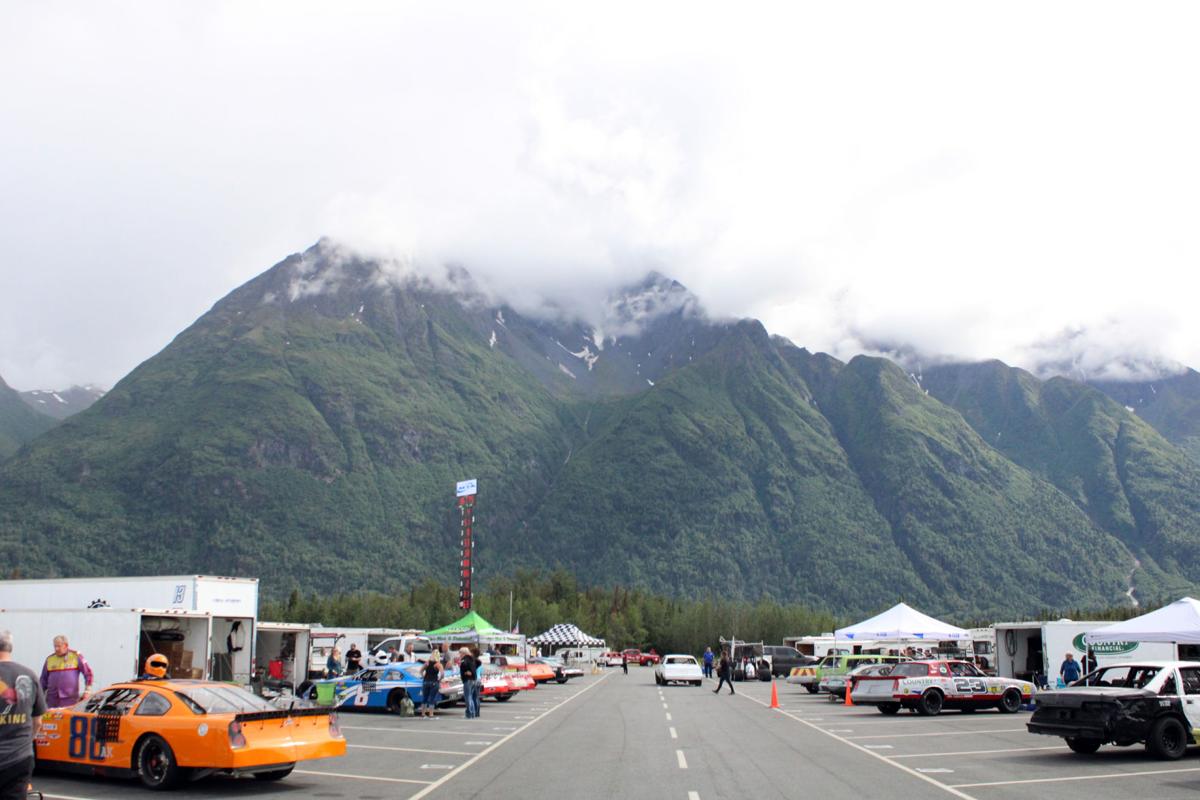 Drivers work on their cars on pit road in between races at Alaska Raceway Park on Saturday. 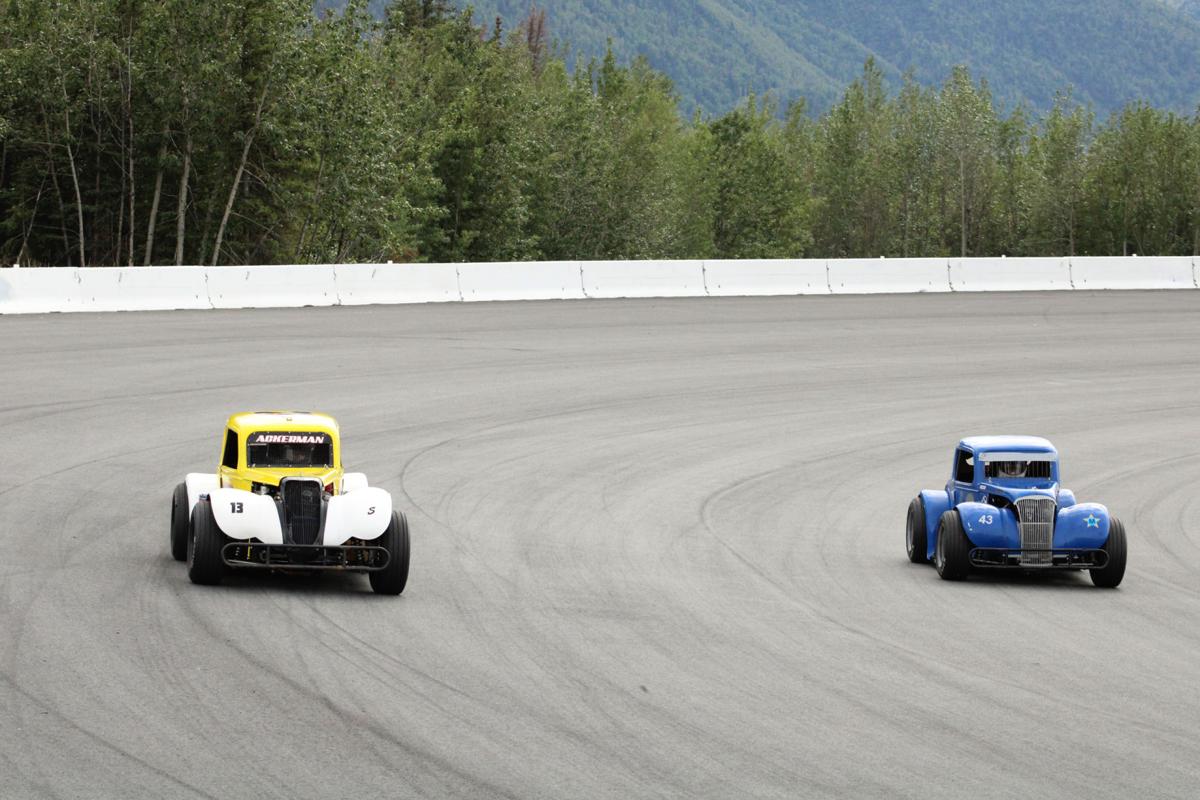 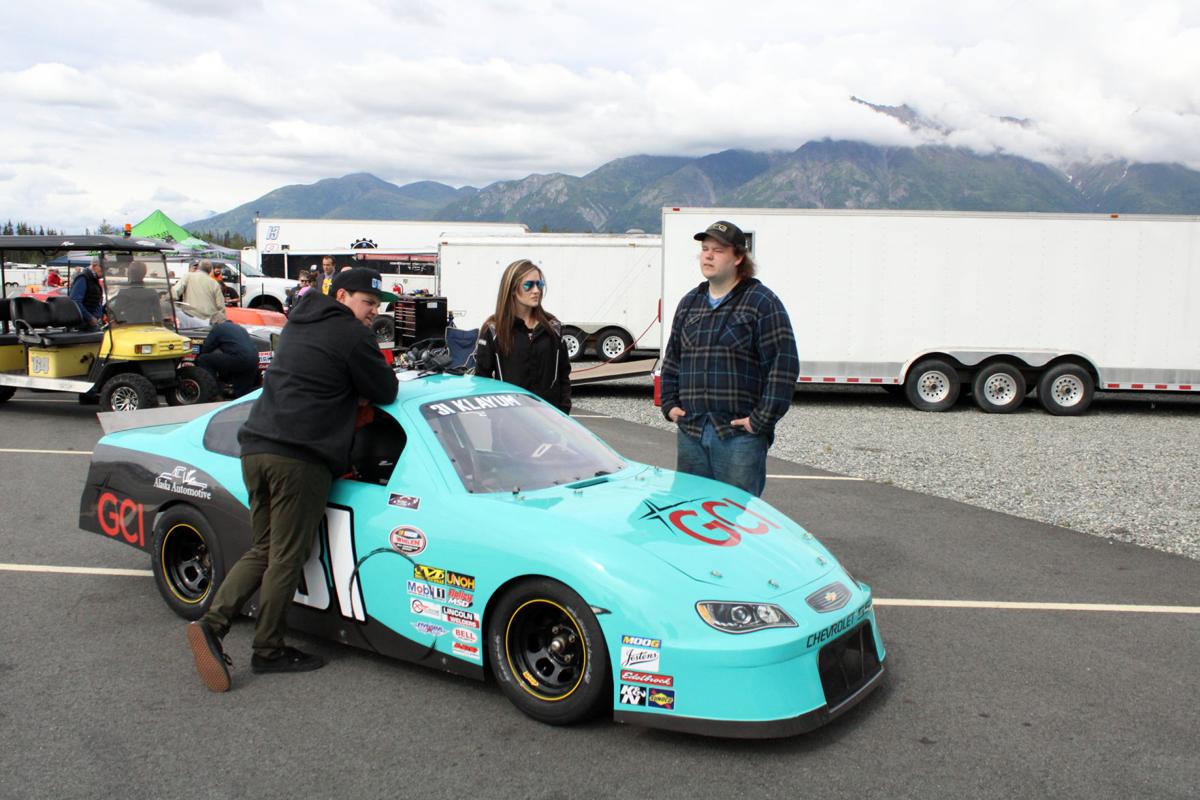 Tonya Klayum and her family relax on her #31 Baby Grand car. 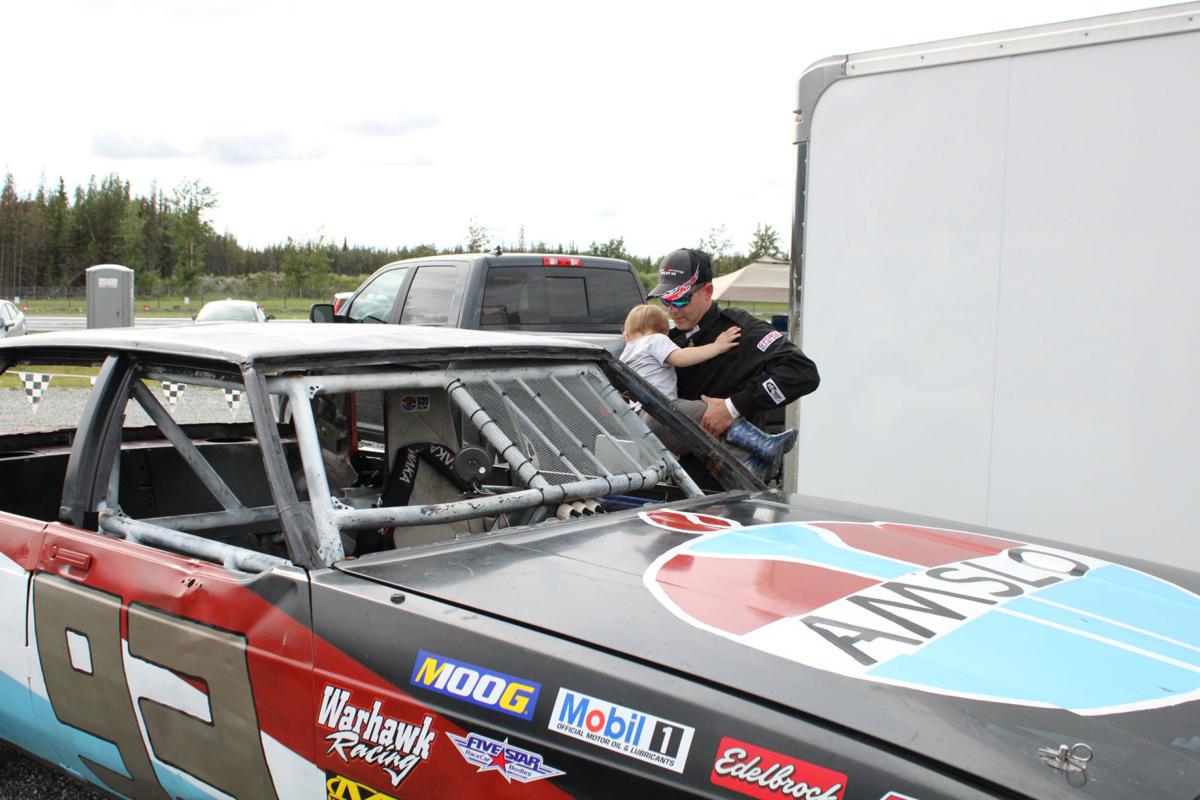 Alfred Smith puts his two-year-old son Paxson in the seat of the #93 bomber stock race car. 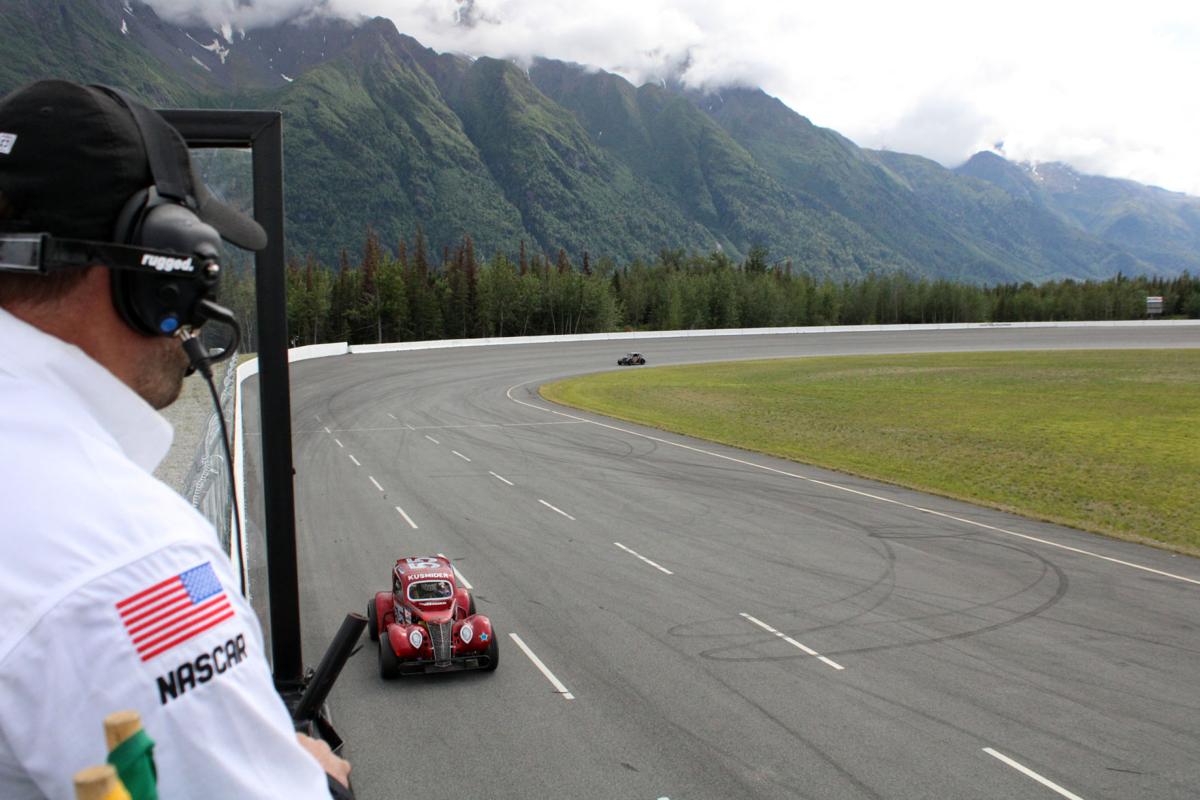 Dave Kusmider drives his #55 car in the legends race. 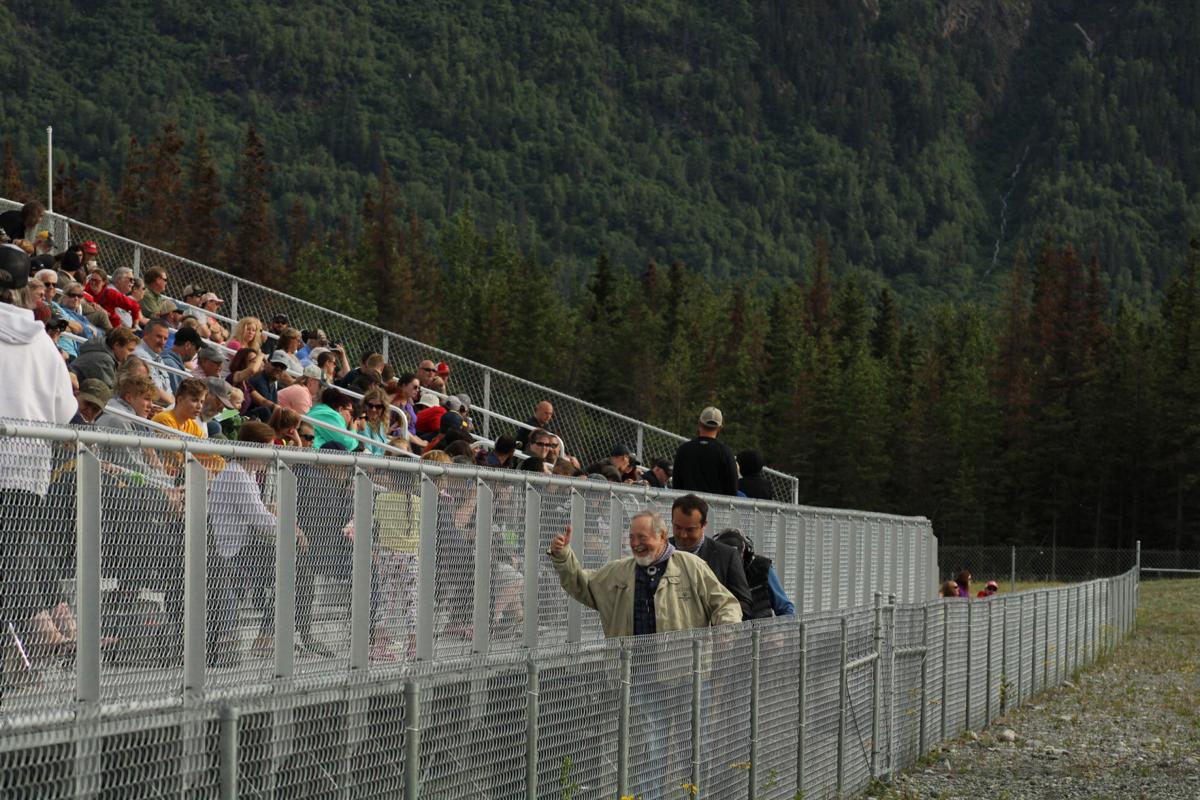 Drivers work on their cars on pit road in between races at Alaska Raceway Park on Saturday.

Tonya Klayum and her family relax on her #31 Baby Grand car.

Alfred Smith puts his two-year-old son Paxson in the seat of the #93 bomber stock race car.

Dave Kusmider drives his #55 car in the legends race.

Hundreds took seats in the grandstand and watched as cars in five different classes took laps around the track. With the COVID-19 pandemic present in Alaska, some race families got a late start preparing for the summer at the track. Alaska Raceway Park owner Michelle Lackey Maynor’s father Earl turned 80 in February. Earl and Karen Lackey are still part owners of ARP and Earl has taken on a new role maintaining the track while his daughter Michelle runs operations on race day. Earl Lackey showed Congressman Don Young around pit row and the race track as Alaska’s only Congressman waved the green flag to start for finals on Saturday and the checkered flag at the finish.

“On Saturday he got to be Don’s tour guide around the track and give him a ride in the pace car and stuff and so for me you know, being able to be here on Father’s Day and to be helping my parents do this, that’s just what we’ve done,” said Lackey Maynor. “There’s a lot of the racers whose kids are, they’re our family too. They’re not biological but it’s just a lot of family and so it’s really neat to be able to spend Father’s Day with a lot of fathers that are passing on this tradition to their kids and there’s even second and third generations that are out there racing.”

Tonya Klayum of Palmer drove her No. 31 baby grand to first place in the points standings on Saturday. Last year, ARP began letting kids on pit row. After some fast laps around the oval, Tonya’s 5-year-old son Jase hung out with his mom on pit row. Klayum has been racing on the oval at ARP since it opened in 2014 and has two championships in the baby grand division and also set the sprint car track record last season. Klayum said that the coronavirus pandemic brought uncertainty around sponsors with the season left undetermined until recently. All of Klayum’s seven-member pit crew is made up of her family members, and her father races in the late model series.

“My grandpa brought these baby grands up in 1997,” said Klayum. “It’s been in the family for a really long time.”

Klayum holds the lead after two weeks of races in the baby grand division with 115 points. Tim Workman, who at 25 years old has been racing for 13 years, holds first place in the late model series with 76 points.

“I started racing when I was 12 years old and I remember Mike Thomas, the No. 5 in the legend, him being the race car hero you know. So my biggest thing is to try to get younger kids into this sport like I was and enjoy it in the stands and just try to bring young people into it,” said Workman. “It’s all the adrenaline. It’s pretty crazy hopping out of the car after you race and your hands are shaking. It’s pretty intense.”

While the age for a learner’s permit is still 14 years old in the state of Alaska, 16-year-old Mady Stichal has been behind the wheel of a race car for three years. Stichal took second last season in her A stock sprint car series and won a dirt track race on the Kenai Peninsula. Stichal does not have any free time on weekends, racing with her family at the track.

“I don’t really think anything of it, I just gun it,” said Stichal.

Stichal said that she loves the speed of being behind the wheel of a race car and providing a good role model for her adoring young fans. Stichal looks up to one of the fastest drivers at the oval track on Saturday, Tonya Klayum. After Mady finished driving around the track, her father Ray continued tweaking her sprint car on pit row.

“I’m just nervous as hell, that’s the only feeling I have the whole time. Yeah, heart’s beating out of my chest, big time pride, but you know what I like more than anything is seeing other people love her and cheering for her,” said Ray Stichal. “Her doing what she’s doing is just beyond awesome.”

Alfred Smith from Ninilchik rented Ryne Friederick’s No. 93 car that Freiderick had built over the winter. The race car rental was a Father’s Day present from Smith’s wife, Amber. Smith got to drive on the oval pavement track in a race car for the first time ever, with his two-year-old son Paxson in the stands. Smith has raced on dirt tracks in the past, but got behind the wheel for the first time in the bomberstock race.

“It’s more the adrenaline rush of getting on the track and just going fast because you know you only get to go 70 miles per hour on the road and being able to actually push cars to the limit versus like hey, you’ve got to go the speed limit,” said Smith about the appeal of racing.

Friederick rebuilt eight cars over the winter and ran four of them in the bomberstock class on Saturday, renting two cars out each week to drivers who want a chance behind the wheel of a race car. Friederick paints his Warhawk cars in color schemes from classic NASCAR drivers to allow the fans to connect with racing history while watching cars at Alaska Raceway Park. Friederick’s #42 car is a 1989 Pontiac Safari station wagon dubbed ‘throwin rodsout,’ which he bought as the ‘something blue’ in an online auction on his wedding day while waiting for his wife to get dressed. Friederick gave two dads the opportunity to race for the first time on Saturday in front of their children and loves the atmosphere at the race track.

“I love it. I like seeing this real grass roots base of car racing because that’s a lot more personal to people in the crowd,” said Friederick. “What little kid doesn’t like watching race cars and it’s cool to see your dad racing so what better thing to do.”

Lackey-Maynor said that the massive crowd that showed up on Saturday to feel the rumble of race cars was both humbling and overwhelming, and admitted to getting emotional during the races after seeing the support for Alaska Raceway Park. Lackey-Maynor said that next week, the retro rockabilly Flag Drags event will take place on the drag strip. On July 18 and 19, kids will be able to race electric power cars on both the drag strip and oval track. Lackey-Maynor was disappointed not to be able to spend Mother’s Day at the race track, but cherished her opportunity to enjoy the races with her family last weekend. While putting on oval track races is an enormous amount of work, Lackey Maynor is grateful that Alaska still has the opportunity to race.

“I was kind of teared up a couple times this weekend because it was just really really cool to see that many people out there having a good time and it’s just really an honor to be able to do that and I feel blessed,” said Lackey Maynor. “I have a lot of track operator friends in the United States and there’s a lot of race tracks that aren’t open yet and that are not going to open and it is really an honor and a blessing to be able to be doing the sport that we love with all of these people that we love.”