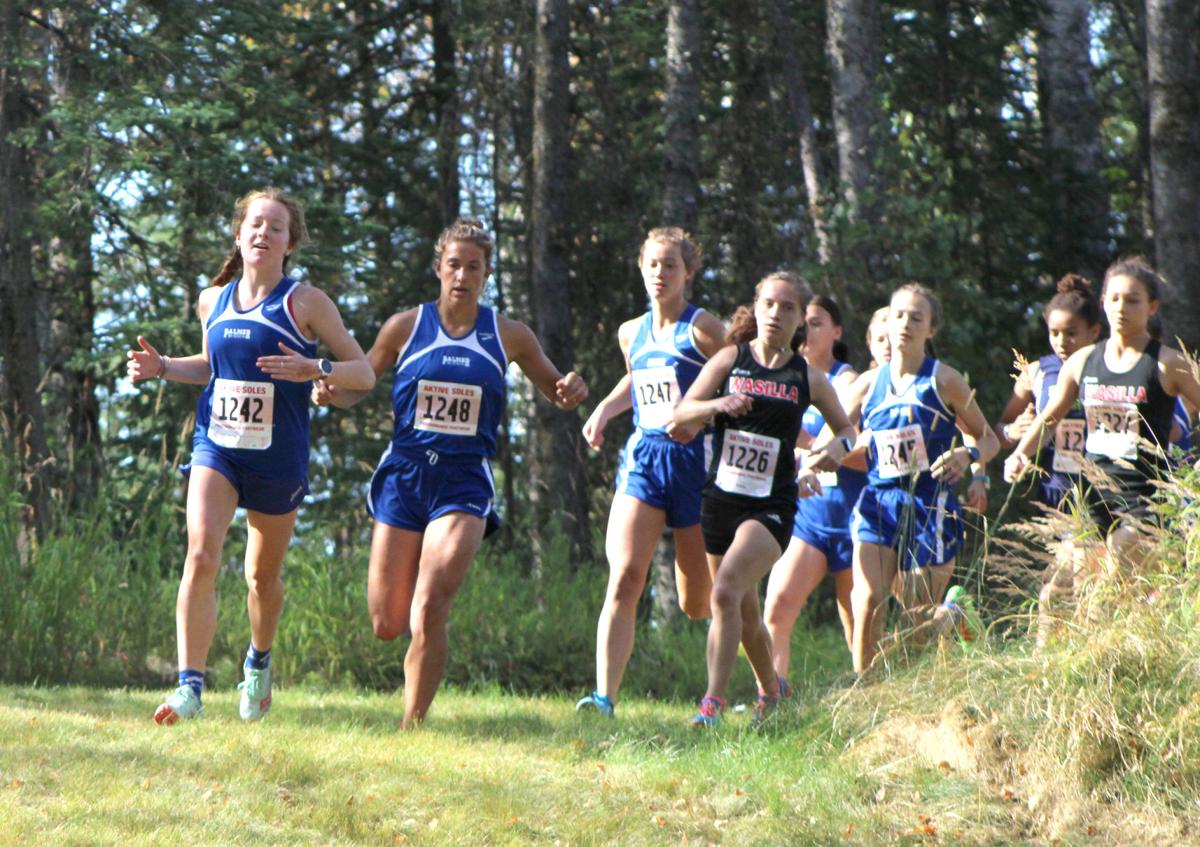 Palmer sophomore Katey Houser leads a pack of runners during the varsity girls race of the Redington Invitational. 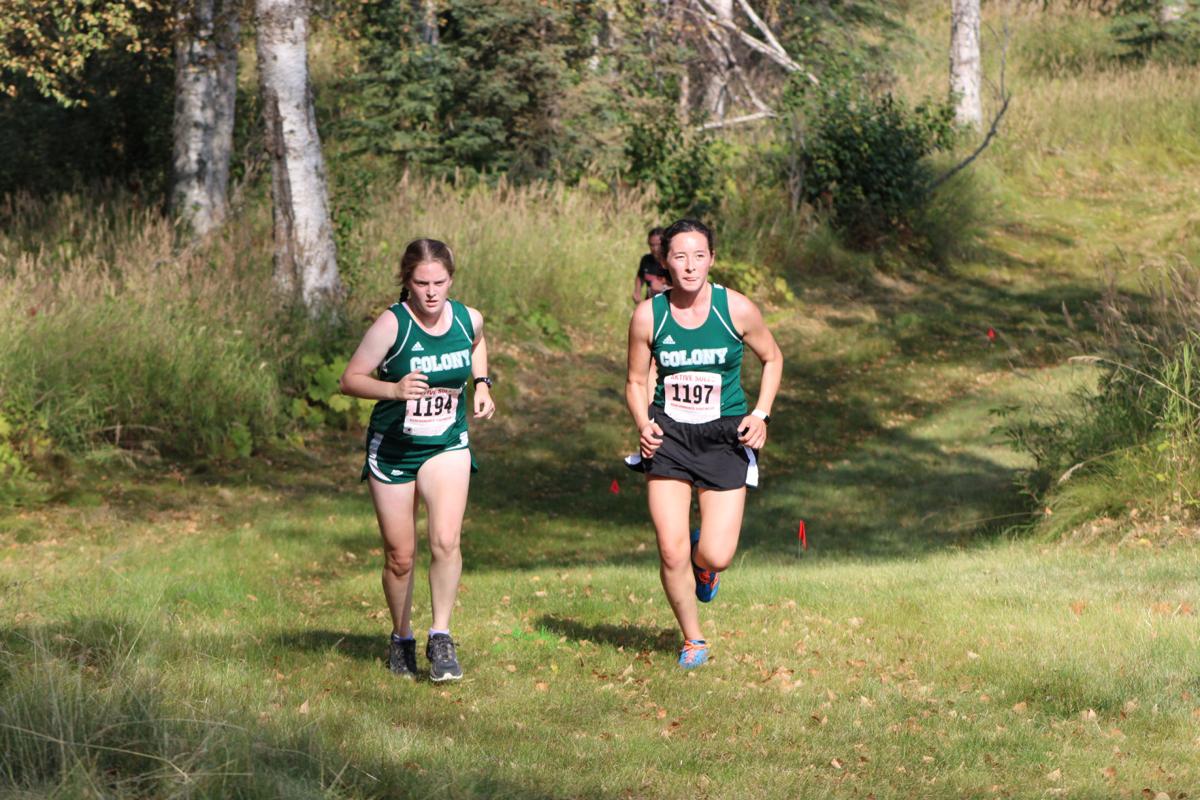 A pair of Colony runners work their way up an incline during the Redington Invitational.

Palmer sophomore Katey Houser leads a pack of runners during the varsity girls race of the Redington Invitational.

A pair of Colony runners work their way up an incline during the Redington Invitational.

But that has changed.

Valley runners converged at Redington on Saturday in the birthplace of the Iditarod for the first cross-country meet hosted by RJSH. In the first race at Redington, Colony junior Garrett Streit ran the 5-kilometer course in 19:52 for the win.

“It feels pretty good,” said Streit of winning the first race ever held at Redington.

Streit led the first group to ever have to climb the impossibly long hill along the back side of the Redington campus. Streit has run cross-country courses around the state, including at Tsalteshi Trails in Soldotna that features a similarly daunting hill. Streit had an immediate take on which hill was worse.

In the varsity races, Palmer junior Noble Gurney secured the win with a time of 18:40, winning by more than 30 seconds over Wasilla sophomore Landon Hayes.

“All I’m going to take from this is I need to work harder,” said Gurney. “Landon Hayes in second, he had a knee brace, I am so proud of that guy. He did amazing.”

Palmer placed two more in the top 10 with Gurney, but took third place in the team standings for the boys. Colony won the boys race, filling up half of the top 10 list with Knight runners. Colony senior Jake Waterhouse took fourth, trailed by freshmen Jayden Rice and Zachary Daniel who finished within 20 seconds of Waterhouse. The Wasilla Warriors took second place in the boys race with Hayes and Brennan Lackey finishing in the top three. Hayes ran a 19:11 and Lackey was just four seconds behind Hayes. Gurney joined almost all of his running mates in awe of the massive hill along the backside of Redington’s course.

“Especially that one big one about 2K, it’s so long it’s gradual and then it comes and bites you halfway through and goes vertical,” said Gurney. “It can be one of the best courses and I’m definitely excited that the Valley is getting more courses.”

Palmer sophomore Katey Houser left off right where she finished the 2018 running season, leading the pack. Houser won by more than 30 seconds, clocking a 21:26 and finishing ahead of Moose teammate Sophie Wright. With the top two finishers and four runners in the top 10, Palmer won the girls race. Colony freshman Shea Lucy led the Knights with a 22:57 finish, just steps ahead of Knight senior Sofija Spaic at 22:59. The Knights placed four in the top 10 for a second place finish. Wasilla senior Abbi Boucher took third at 22:38 and the Warriors took third. Redington assistant principal Matt Swalling said that Saturday’s inaugural meet was not the first time he’s heard doubts about how long and steep the Huskies’ hill is.

“They said well is this going to be too long a hill or too steep and we said well we want a challenge,” said Swalling. “We needed to be able to train here and get the experience they need right on site so that was another reason we wanted real competitive a hard course.”

Though the trail has existed since the school opened, putting together a cross-country meet is no easy task. Huskies head coach Francisco Campbell said that it was a bit nerve racking, but he had valuable experience and help from parents and the community. Campbell is working to establish a formidable team at Redington to rival the sled dogs in the surrounding neighborhood. Campbell said that his top runner is Anna Stephan, who also competes in the junior Iditarod. Though he did not have a hand in designing the course, Campbell is proud of the trails his team calls home.

“This is the first course in the valley that’s actually a 5K,” said Campbell. “The hills, I love the hills. I mean they’re not like super steep, but they’re long and it’s a good workout and I’m really happy that we have hills just to train our kids because it’s going to make them much better.”

Campbell said that he not only loves the challenge of the course, but the breathtaking mountain views along the trail down Knik-Goose Bay Road. Though he’s spent a short time as head coach, Campbell is already impressing spectators of Husky running.

“He’s tireless, for one. He’s usually one of the first people here and he stays late and he is encouraging his kids. He’s one of the most motivational coaches,” said Swalling. “My boy just started running for him and simply just because coach Campbell came up and said hey, I think you should run you’d be a good runner. He’s got that charisma to draw the kids in so I see success for him in the future and we’re already starting to see it.”

The response of both the running community and the mushing community toward Redington has been overwhelmingly positive. Swalling said that the grandson of the school’s namesake Ray Redington let the school borrow a sled last winter out of the kindness of his heart. Colony allowed the Huskies to borrow a groomer last winter in an effort to use the trails for cross-country skiing in the winter.

“When they were designing this school they did some community input stuff and over and over the response was they wanted a community facility, not just a school. So these resources are here. We encourage people to use the trails, responsibly of course,” said Swalling.