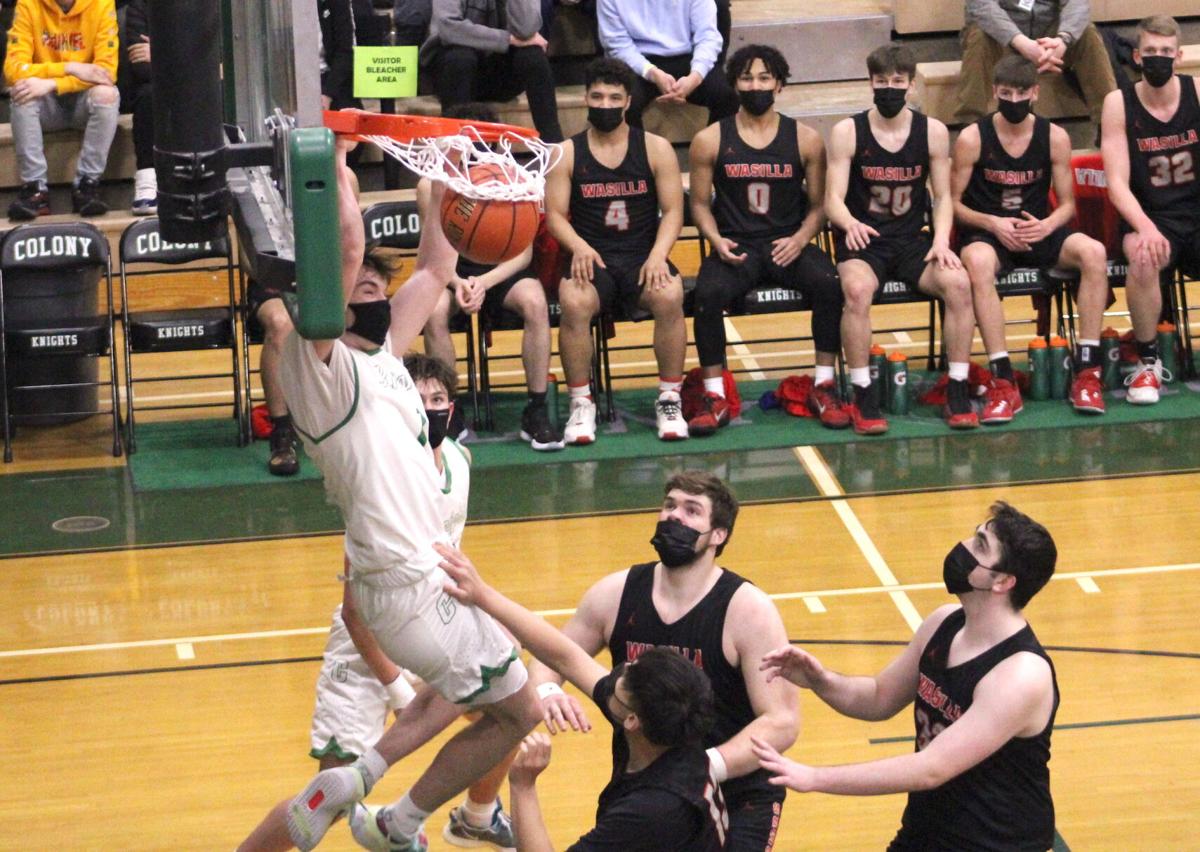 Colony's Patrick McMahon dunks during a win over Wasilla in the Northern Lights Conference title game. 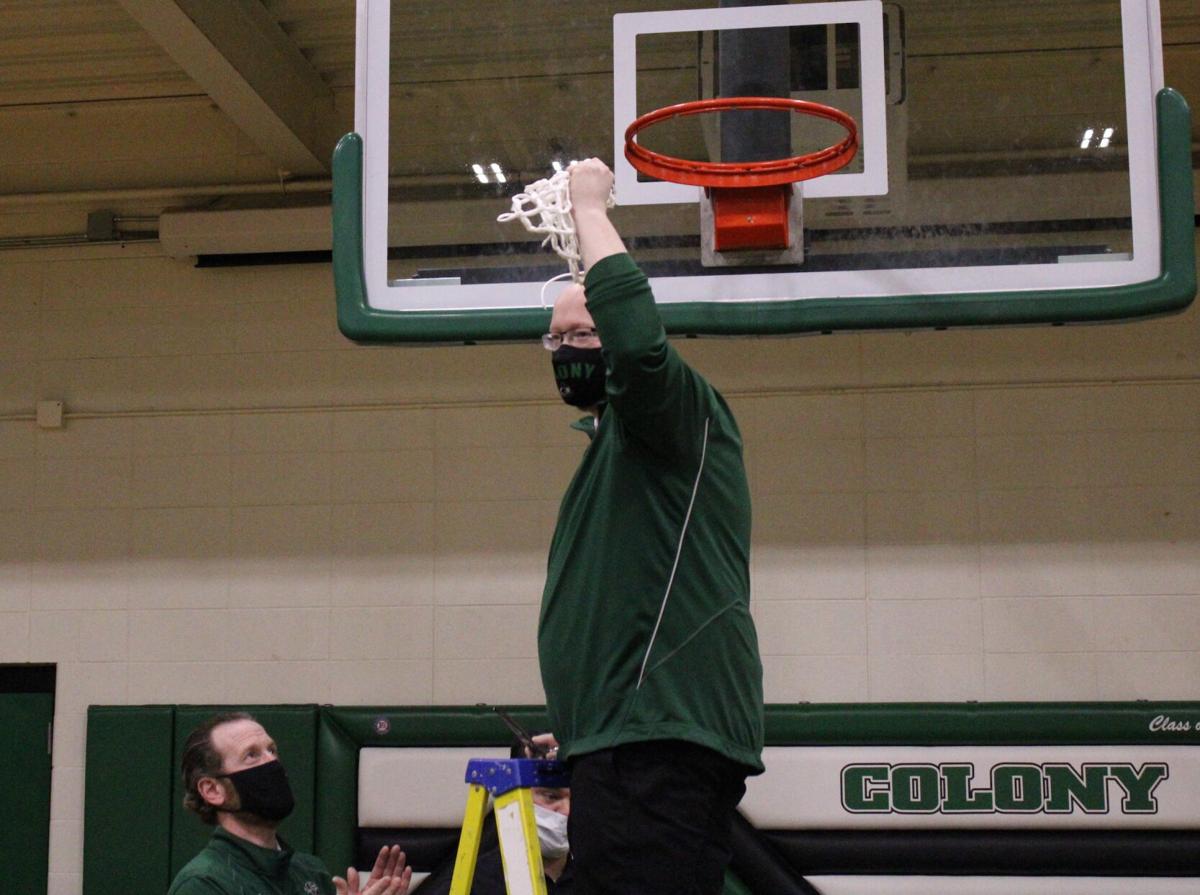 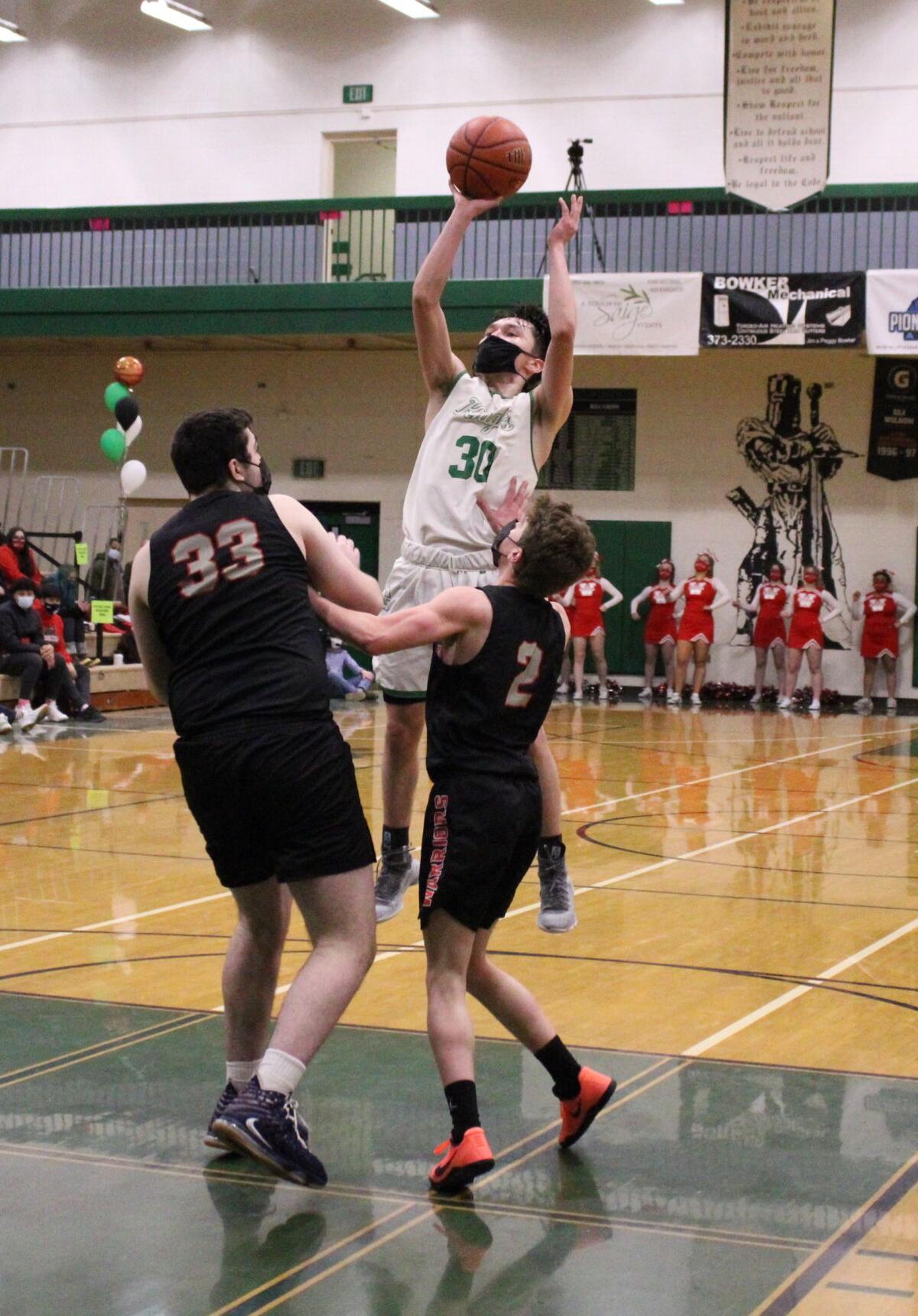 Colony's Jeremiah Hersrud pulls up for a jumper during a win over Wasilla.

Colony's Patrick McMahon dunks during a win over Wasilla in the Northern Lights Conference title game.

Colony's Jeremiah Hersrud pulls up for a jumper during a win over Wasilla.

PALMER — The Colony Knights boys basketball team never trailed in their Northern Lights Conference Championship victory over the Wasilla Warriors, winning by a score of 59-36 on Saturday night at Colony High School.

The game was a matchup of defensive strategies with Wasilla opening up in a zone defense and Colony starting the game in a full-court press. McMahon benefitted from trap defense to start the game, scoring four of the first five baskets for the Knights. An alley-oop slam from McMahon put the Knights up 10-0 in the first quarter. Just over five minutes into the game, Colony backed off from their full-court press defense.

“They beat us last time we played so we came with a chip on our shoulder. Honestly we were all ready to go,” said McMahon. “That’s the first net I’ve ever cut down so it was a great feeling. I’m hella excited right now.”

Colony scored the first 13 points of the game and the Knights suffocating defense held Wasilla to just one made basket in the first quarter.

During the first quarter, shifty senior guard Jeremiah “Shish” Hersrud picked off a pair of Warrior passes, turning them into points on the offensive end for Colony. Near the end of the first quarter, Hersrud leapt for a layup and fell hard to the floor over the Wasilla defender attempting to take a charge. After an injury timeout, Hersrud returned from the bench to rally the Colony offense, directing the ball around Wasilla’s zone defense.

Warrior wing Arthur Adams hit three straight three-pointers in the second quarter and Colony took a 33-15 lead into halftime. McMahon alone had 19 points at halftime, and scored the first bucket of the second half.

Each of the four forwards starting the game stood over 6-foot-6. Colony’s Luke Reaves chipped in nine points. Wasilla was led by Payson White with 12 points and Andrew Devine added four points.

Adams finished with 11 points for Wasilla.

Hersrud scored 10 of his 13 points in the second half, and the Knights were helped by Jayce Underwood, who hit two three-pointers and played tenacious defense on the perimeter. McMahon took the ball on a breakaway to start the fourth quarter and a hush came over the crowd at Colony, anxiously awaiting the aerial acrobatics from the high-flying forward, but instead McMahon drew a foul on his shot. Later in the fourth quarter, Hersrud tossed a no-look alley-oop pass that McMahon jammed through the hoop to give Colony a lead of more than 20 points.

“I was happy. We played hard, we played with energy tonight, we were able to make a few shots,” said Berg.

Gathered around the net that Knights players and coaches cut down to commemorate their victory, the cheers rang out loudest Berg, who promptly began victoriously wearing the net as a necklace.

“It really means everything because he’s the one that’s always up at 6 a.m. getting ready for practice and on the weekends and always having dinner at his house. Lately he just does everything. He’s as committed as us,” said Hersrud of Berg.

The 2020 Colony Knight team was primed to make a deep run at the state tournament that never was held due to the start of the coronavirus pandemic. Berg applauded the effort from basketball players around the Valley over the course of the tumultuous season.

“We had almost nine weeks of our preseason shut down. We started the season, then we had the season shut down for 14 days and then it was just trying to get games in so we could get to this moment. The level, and this is true of my team this is true of all the teams we’re playing in the Valley, the level of adversity and perseverance that every one of these athletes has shown from no mask to shut down to now we’ve got to try to get back in shape but still wear these, no season have we asked a group of kids to do that so unbelievably resilient for those guys,” said Berg. “I hope we continue and we want to peak when we get to state.”

Palmer earned a third-place finish in the NLC with a 53-44 win over Kodiak Saturday at Colony High.