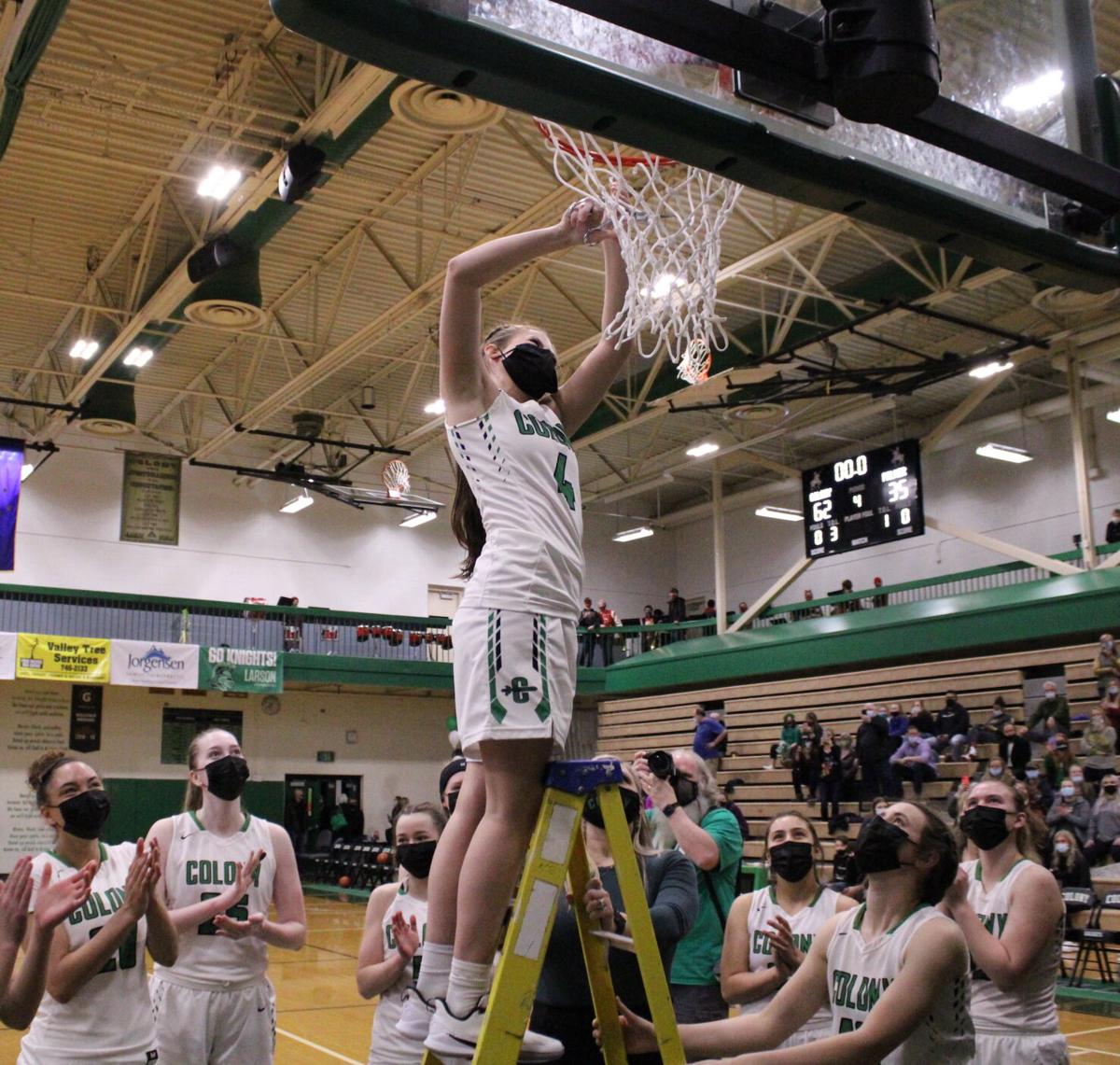 Colony's Hannah Duguid cuts a piece of the net as the Knights celebrate their win in the Northern Lights Conference Championships title game. 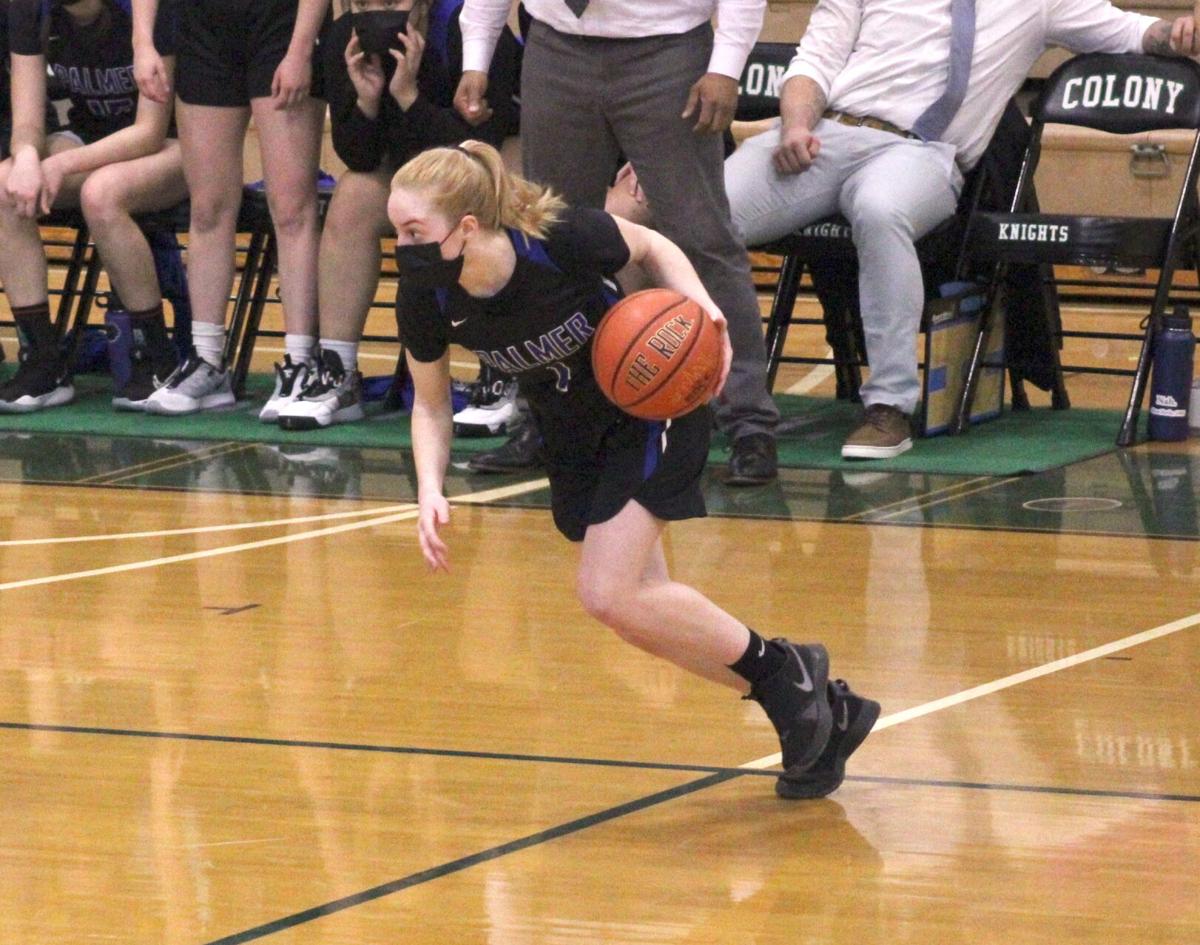 Palmer's Livia Solis drives the ball up the floor during a loss to Colony in the Northern Lights Conference title game.

Colony's Hannah Duguid cuts a piece of the net as the Knights celebrate their win in the Northern Lights Conference Championships title game.

Palmer's Livia Solis drives the ball up the floor during a loss to Colony in the Northern Lights Conference title game.

PALMER — The Colony Knights girls basketball team took home the Northern Lights Conference title in a matchup against Palmer on Saturday night with a 62-35 win over the Moose.

Colony opened up a lead in the second quarter thanks to their tough defensive play and never looked back. Junior forward Indiya Clarke was named NLC MVP and Palmer head coach Keith Williams earned Coach of the Year honors.

“It’s what you work for from the beginning of the season. We put two dates on the calendar, March 20 and March 27. This is the first one,” said Colony head coach Jeff Bowker. “We talked about perseverance all season and they persevered throughout the season and you kind of go through the lulls, you go through being sick and then you get to this point and we were just talking about that being our goal and they kept improving and the chemistry was there and they executed and played terrific.”

The Knights took a nine-point lead early in the first quarter after an Adrian Alley three-pointer, but Palmer’s Kinzey Hutchings hit two straight layups to bring the Moose within one. That was as close as Palmer would get. Knights guard Maggie Spencer hit two of her game-high four three-pointers during the second quarter and the Knights ran away with the conference crown.

“It was our defensive effort. We knew it had to come down to defense creating extra opportunities,” said Bowker. “We got extra opportunities because of our defense. I think Palmer’s a terrific team. They shoot really well and so if you don’t guard them they will light you up and we were able to guard and give ourselves second chances and that definitely was a big thing.”

The Knights were paced by Spencer, who scored 24 points for Colony. Indiya Clarke scored 10 of her 13 points in the second half, and Tori Schwantes scored seven points.

Palmer struggled to move the ball inside the paint around Colony’s speedy guards on defense.

“They executed and had phenomenal defensive pressure by the girls and just great shooting,” said Palmer head coach Keith Williams.

“We’re blessed and grateful to be going to state,” said Williams. “It’s incredible. That’s been our goal, especially for our senior. Catherine is the epitome of what Palmer Moose basketball is. She was a starter for four years, a captain for three and we just kind of gravitated to doing it for her.”

Williams was honored as Coach of the Year and credited his players with putting in work doing training during the offseason, despite shutdowns and schedule changes along the way.

“In the summer coming in, working out, open gyms, 6 a.m. shootarounds, all those things. We kind of had a cultural shift right and then in the beginning of the season we had to work through some things and we had some hurdles that we had to jump over,” said Williams. “For me it’s them, it’s my coaching staff, it’s the community, it’s the administrators, it’s the parents, it’s the board, it’s all that combined. It’s a program award and I’m just blessed to be the shepherd of the program.”

The Wasilla Warriors used a late run to get past Soldotna 53-45 in the NLC girls third-place game Saturday.

Wasilla outscored SoHi 24-9 in the fourth. Megan Alley scored seven of her 10 points in the fourth. Bella Hays added six of her 16 points during the final quarter.

Colony’s Indiya Clarke was named the player of the year. Colony’s Maggie Spencer, Palmer’s Catherine Uschmann, and Wasilla’s Bella Hays and Sheridan Green were also named to the first team.