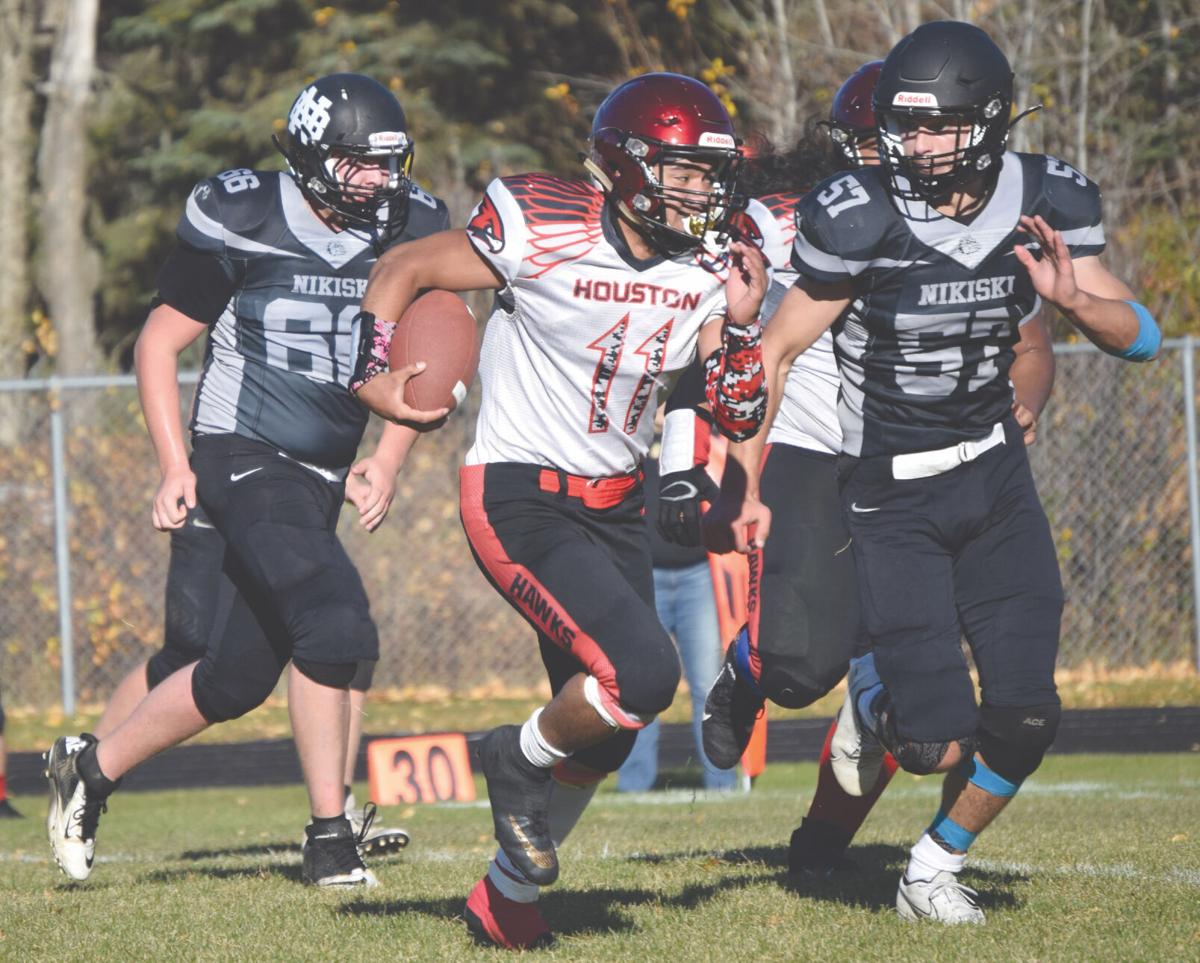 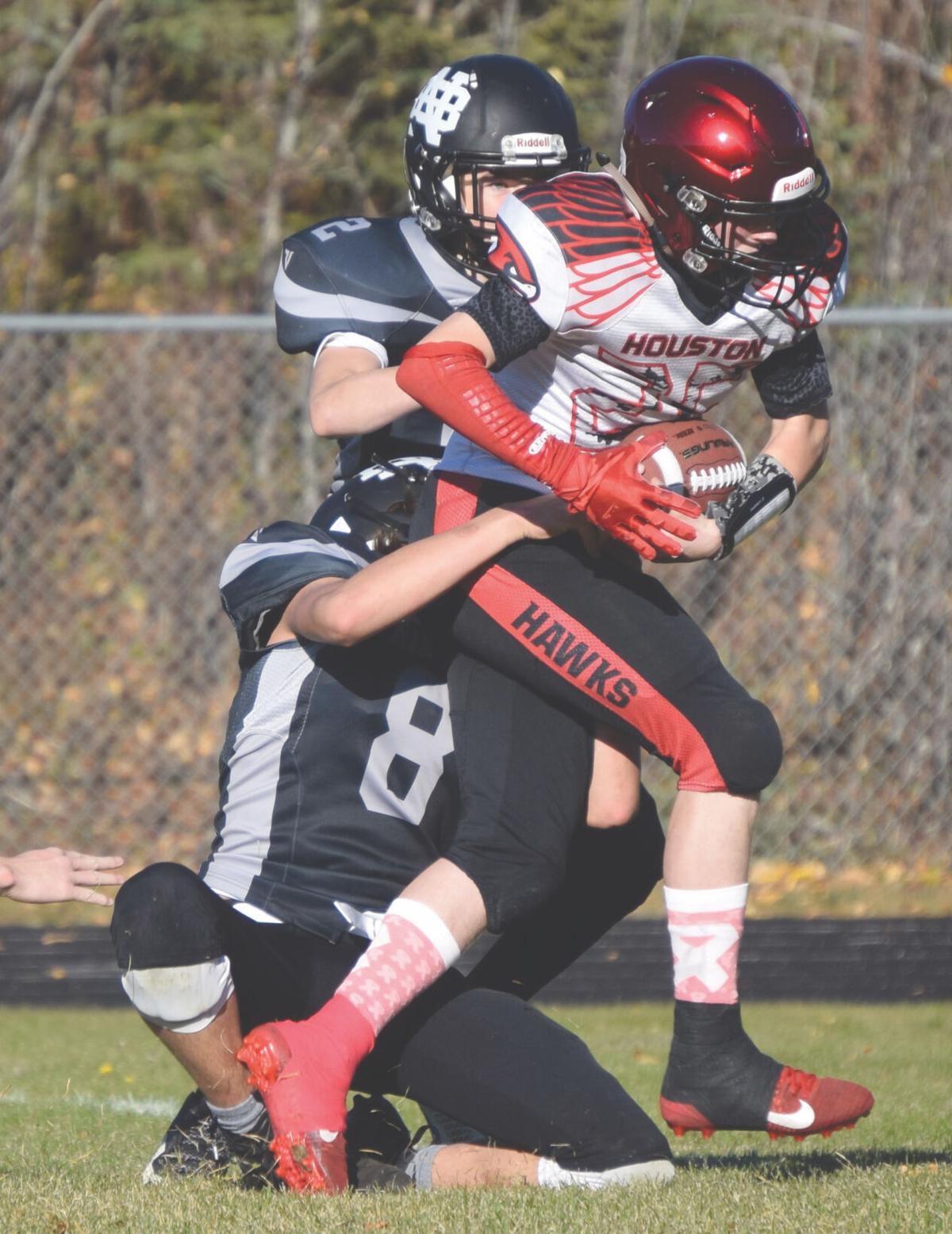 Nikiski's Simon Grenier and Holden Warnke stop Houston's Gordon Ratcliffe just short of the end zone with no time left in the first half Saturday, Oct. 10, 2020, at Nikiski High School in Nikiski.

Nikiski's Simon Grenier and Holden Warnke stop Houston's Gordon Ratcliffe just short of the end zone with no time left in the first half Saturday, Oct. 10, 2020, at Nikiski High School in Nikiski.

The host Nikiski football team hung in for a half before succumbing to Houston 36-6 on Saturday in a Division III quarterfinal.

Houston, which last year won the first state title in school history, moves to 3-4 overall and sets up a Friday semifinal clash on the road with Monroe Catholic. Nikiski ends its season at 1-3.

“A lot of times big boys can’t move, but they’re athletic. We hung in there.”

The Hawks got off to a quick start, with Gordon Ratcliffe recovering a fumble on Nikiski’s third play from scrimmage.

It took Houston just two plays to get into the end zone, with Colton Bunn finding Eric Preboski for a 36-yard gain. Bunn then scored on a 1-yard quarterback sneak.

That started an efficient game for the junior quarterback. He finished 6 of 7 for 144 yards.

Even with that type of quarterbacking, the Houston offense had trouble moving due to mistakes and a gritty Nikiski defense.

The Hawks lost a pair of fumbles in the first half, with Truit McCaughey and Timmy Goodnight recovering for Nikiski, and also rolled up 75 of their 111 penalty yards. Some of the penalties brought back big gains and touchdowns.

“We were not clean and crisp,” Houston head coach Glenn Nelson said. “It was our first away game. We were on the bus at 6 a.m., but that’s no excuse. We’ll look at the film and clean it up.”

Glenn Nelson said that may have made his team overconfident.

“Playing Wasilla, as big as they are, and Colony, as fast as they are, and Palmer is solid,” Glenn Nelson said. “These guys got ahead of themselves because they’re playing a team of their own size.

“They learned you have to show up when the whistle blows.”

Houston would take a 15-0 lead into half when Bunn scored on another 1-yard run with 48 seconds left in the first half.

While Nikiski’s defense was firm in the first half, the Bulldogs’ offense had trouble moving and holding on to the ball most of the game. The Bulldogs finished with 164 yards of offense and lost four fumbles and an interception.

“For us to be down 14 or 15 to nothing at the end of the first half was a win for us,” Paul Nelson said. “The goal was to hang around in the first half.”

In the third quarter, Houston’s size began to assert itself as multiple Nikiski players had to spend a few plays in the sideline after hard hits. Paul Nelson said most of the injuries were temporary. The one Nelson is not sure of was a knee injury to Gavin White, who left to get checked out at the hospital.

“When we woke up and started pounding the rock inside with the big guys, we were able to get it going,” Glenn Nelson said.

Glenn Nelson said left tackle Kiderro Fono had a great game blocking. The coach called him a next level talent.

Paul Nelson gave credit to his players for sticking around through a tough season. The coach said that resilience showed again in the fourth quarter.

That hard work paid off when senior Koleman McCaughey had a 73-yard touchdown run with 4:07 to play. McCaughey is one of the players who took a few plays on the sideline after a hard hit.

“I told the seniors to leave everything out there and I 100% believe they did that,” Paul Nelson said.