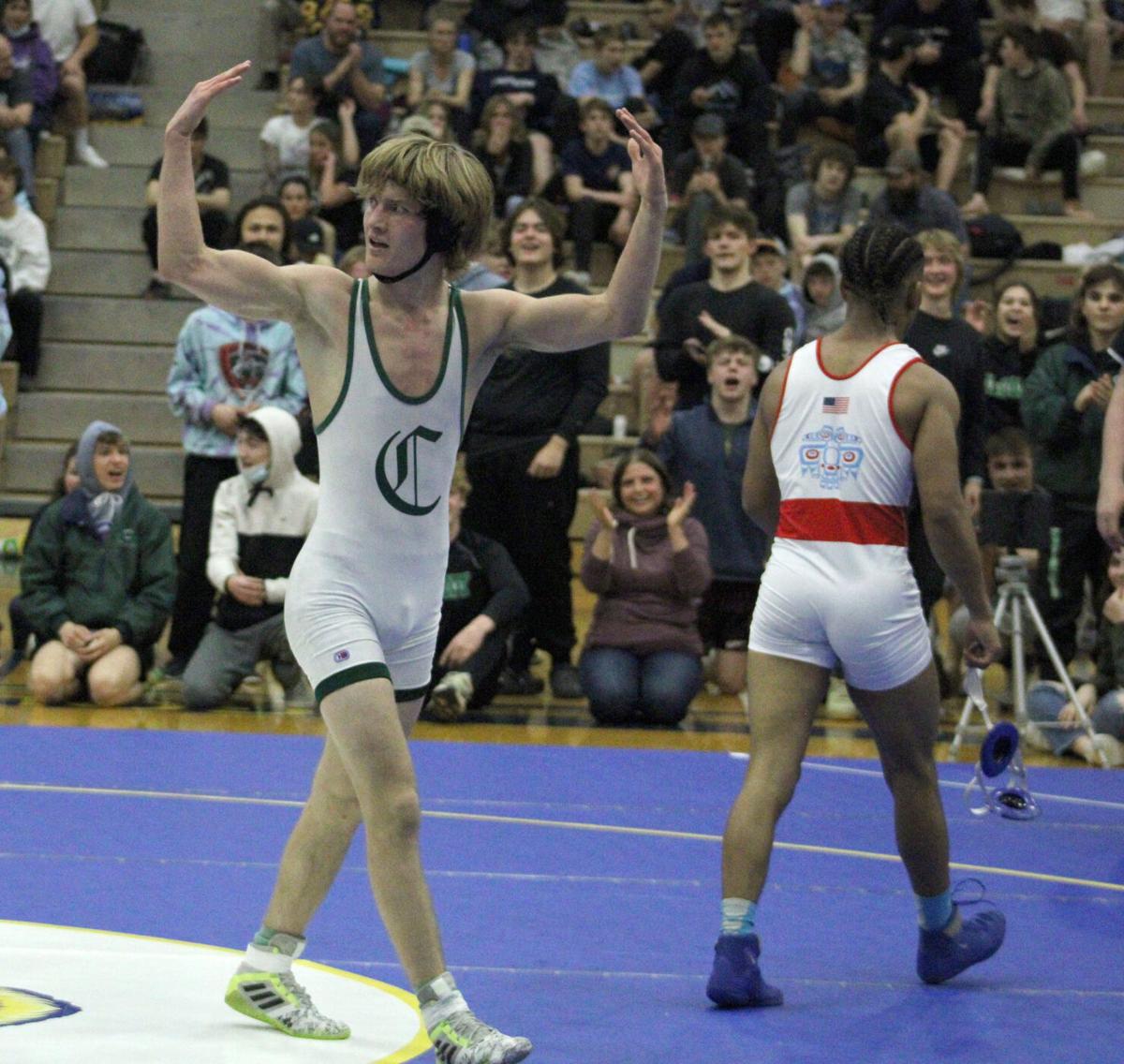 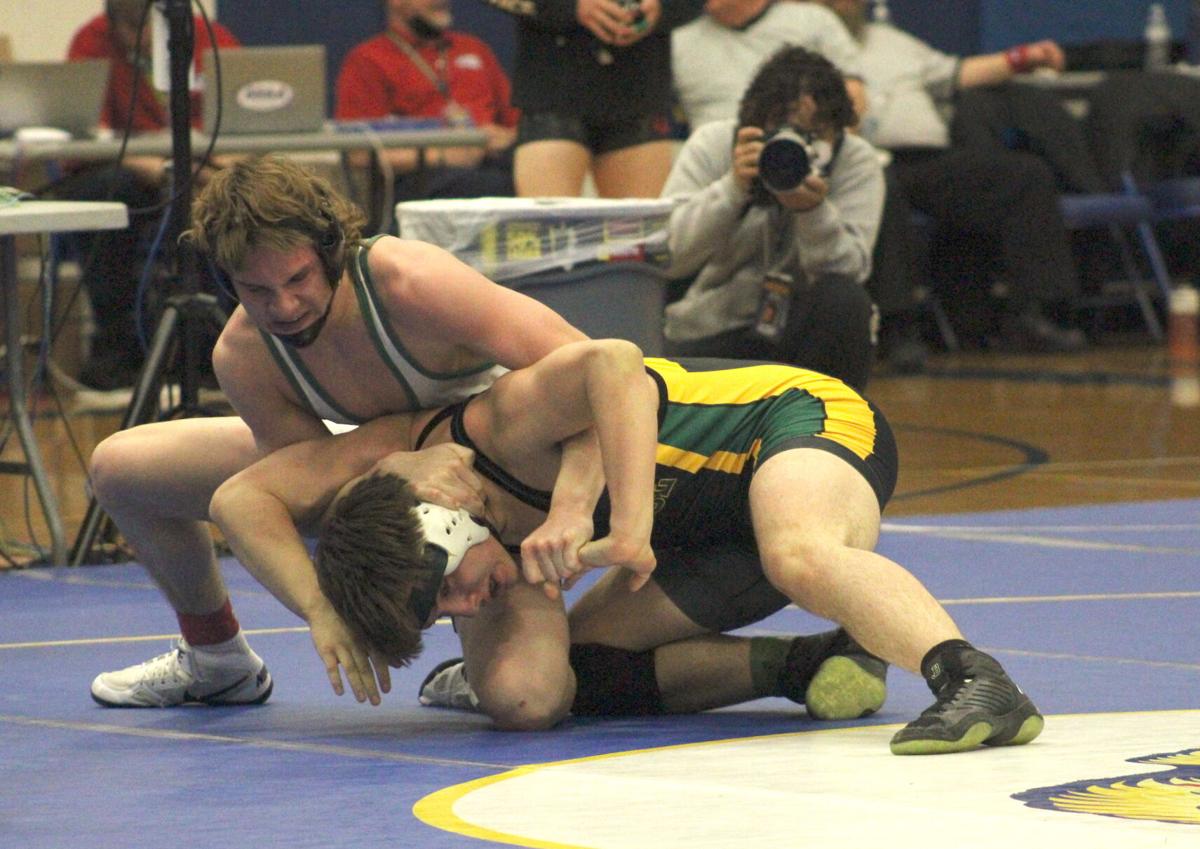 In the final round on Saturday at Bartlett, Jerzy Ritz took the 3-1 win over DeShawn Barbee of East Anchorage High School for the 103-pound title.

“We were just trying to get dominant position on our feet so someone could take the other person down. I think we were just both too quick. It was hard for us to take each other down,” said Ritz.

Ritz held on after scoring early in the match to win his first state title. Ritz said that his experience is what made the difference in the match.

“Thirteen years of wrestling. I mean you’re a senior at 103, you’re probably going to win,” said Ritz. “First time I’ve been a state champion. It feels good. We have really good coaches and they push us to work hard every day, go hard on the mat.”

Carter Silva was the first Knight to be crowned champion with a 4-1 victory over Caleb Martin of Chugiak at 125. Kayden Payne followed Martin with a masterful comeback victory at 145.

“I think Kayden Payne shocked the world. He’s a very cool customer, ice in his veins and that was a big turning point,” said Hopkins. “The momentum kind of took over and then Kayden kept it going and then it just kept going.”

Payne was trailing Octavius McClesky of East by as many as five points late in the second round. With an undefeated season coming into the match, Payne fought back to tie the match using a takedown with less than 10 seconds remaining at 10 points.

Payne wrestled his way to tie the match at 10 and forced an overtime period with McClesky.

“At that point obviously I was feeling good. I had just scored like six points to his one the last two minutes. At that point I don’t know what everybody else was thinking but I was thinking that it was my match to lose. I had this if I wrestled what I was capable of doing. All I had to do is wrestle how I wrestle and I knew I was going to win,” said Payne.

Wasting little time during the overtime period, Payne took down McClesky and capped his undefeated season with his first state title at 145 lbs.

“I thought I was going to be mentally prepared for it,” said Payne. “This is going to be pretty cliche but it was just indescribable. I could not even control, I wasn’t in control of myself after it all. I was just so happy, so hype. I’ve been wrestling since kindergarten and this was basically the main goal. I finally achieved it,” said Payne.

Senior Jared Hopkins won his second state title with not only his father in his corner, but each of his older brothers who are Division 1 wrestlers offering him tips throughout the course of the tournament.

“After all my matches and before that one, Caleb and my brothers were showing me a couple of tricks that they thought might help me so it’s super cool and just my dad being at every practice and always in my corner is super awesome,” said Jared Hopkins.

Hopkins competed in an all-Valley final, defeating Antonio Woodfork of Palmer 11-7. Like Payne before him, Hopkins trailed early in the match and was able to overtake Woodfork and win his second state title. After coaching three sons that have won state wrestling titles, Todd Hopkins soaked in the moment of watching his son wrestle for the last time as his coach.

“This morning I got choked up because we were driving to the last weigh in that I would be driving my kids to and it’s been a long time, a lot of Fridays and Saturdays doing that and this was the last one for my boys,” said Todd Hopkins.

Each of the five Colony boys that wrestled in the finals took home a state title, but none was more dominant than Aidan Ehmann at 171. Ehmann pinned his way through the tournament, including Andrew Green of Service High School in the finals for his second state title.

“It felt good to finally get back to it. I won it sophomore year, lost it last year so good to get that feeling again and know that all the work that I put in over the past 10 or 11 years has paid off in the end,” said Ehmann.

Ehmann thanked his coaches and enjoyed his time wrestling for Colony. Ehmann said that the Knight coaches focus on the basics of wrestling to get the job done.

“I’ve used the same moves all four seasons, every match this season to pin everyone. I’ve pinned every single kid with the same move for the most part so just persistence,” said Ehmann. “We don’t work on anything but the basics and I know everyone gets sick of it in the room but it’s worked for us since I’ve been here. It’s not the most exciting, we’re not the most exciting team to watch but we get the job done.”

Despite the high school wrestling season getting pushed back from the winter to the spring due to COVID-19, Hopkins was thankful that his wrestlers had the opportunity to compete against the best in the state.

“It was awesome even just to have a season you know our school district, the school board had to put things in place to make things work. Our school nurses, countless hours contact tracing and making sure everyone is safe and ASAA deciding to put it on. It’s a lot of things had to come into play to make it work. A lot of people dedicated a lot of time,” said Todd Hopkins.

Colony’s first-place team score was 265 points, followed by Lathrop in second place with 257. Palmer finished in sixth and Wasilla finished in seventh. The Knights have not finished outside of the top two spots since 2013 and continue to prove to be one of the best wrestling teams in the state. Hopkins credited that success to the families around Colony wrestling.

“I think for us it’s a community effort. We’ve had a club team with you know eight or 10 dads that have been coaching since these kids were five, moms that are super involved with the clubs as well. They just care about their kids,” said Hopkins.

Three other Valley wrestlers competed in the finals on Saturday at Bartlett. Wasilla’s Colton Lindquist faced Soldotna’s Sean Babbitt in a state title rematch and was pinned after a back-and-forth match with the eventual Most Outstanding Wrestler of the tournament in Babbitt. Palmer’s Owen Manley fell to Lathrop’s Jeremy Bockert at 135 and Wasilla’s Niles Williams fell 8-3 to South’s Niko Mayo at 152.