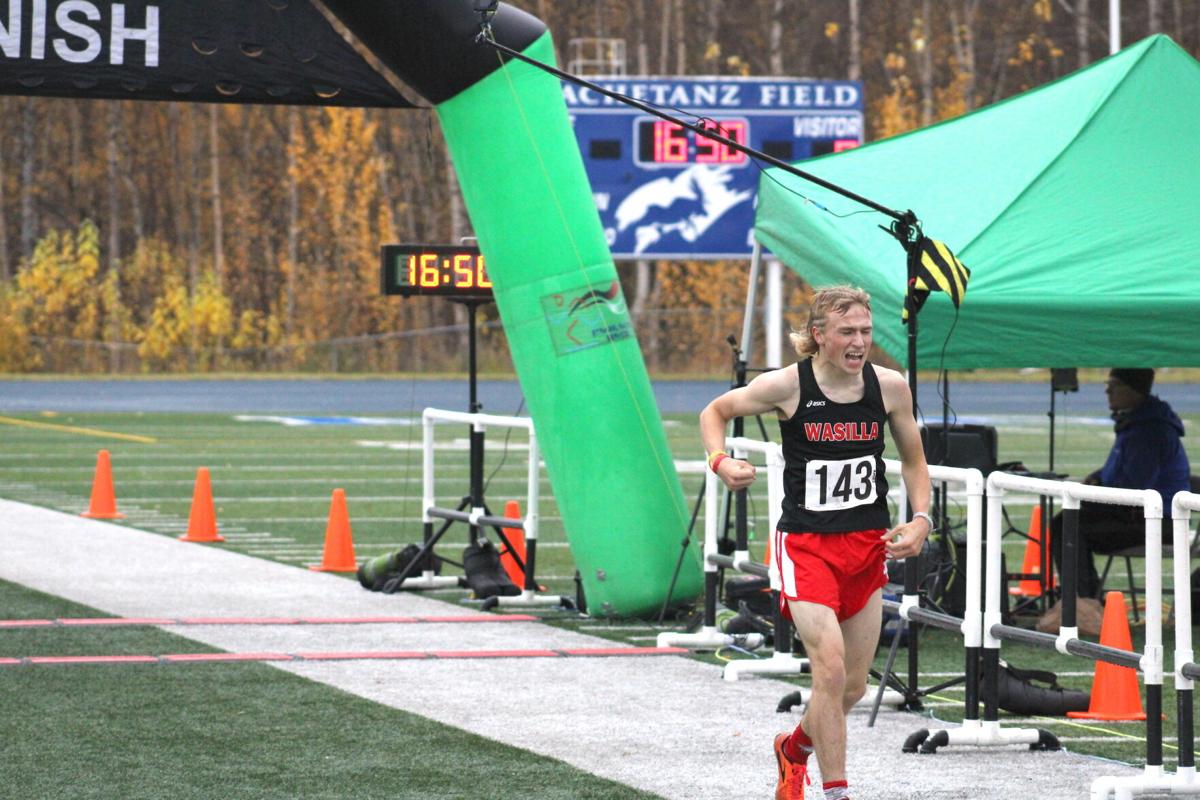 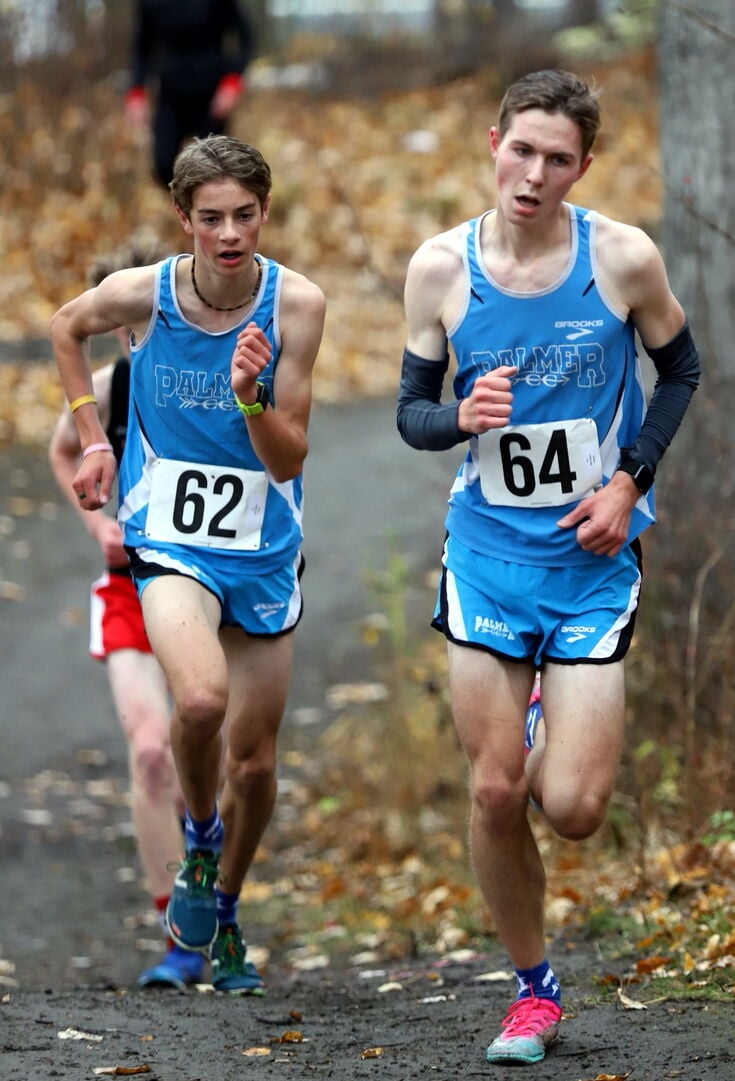 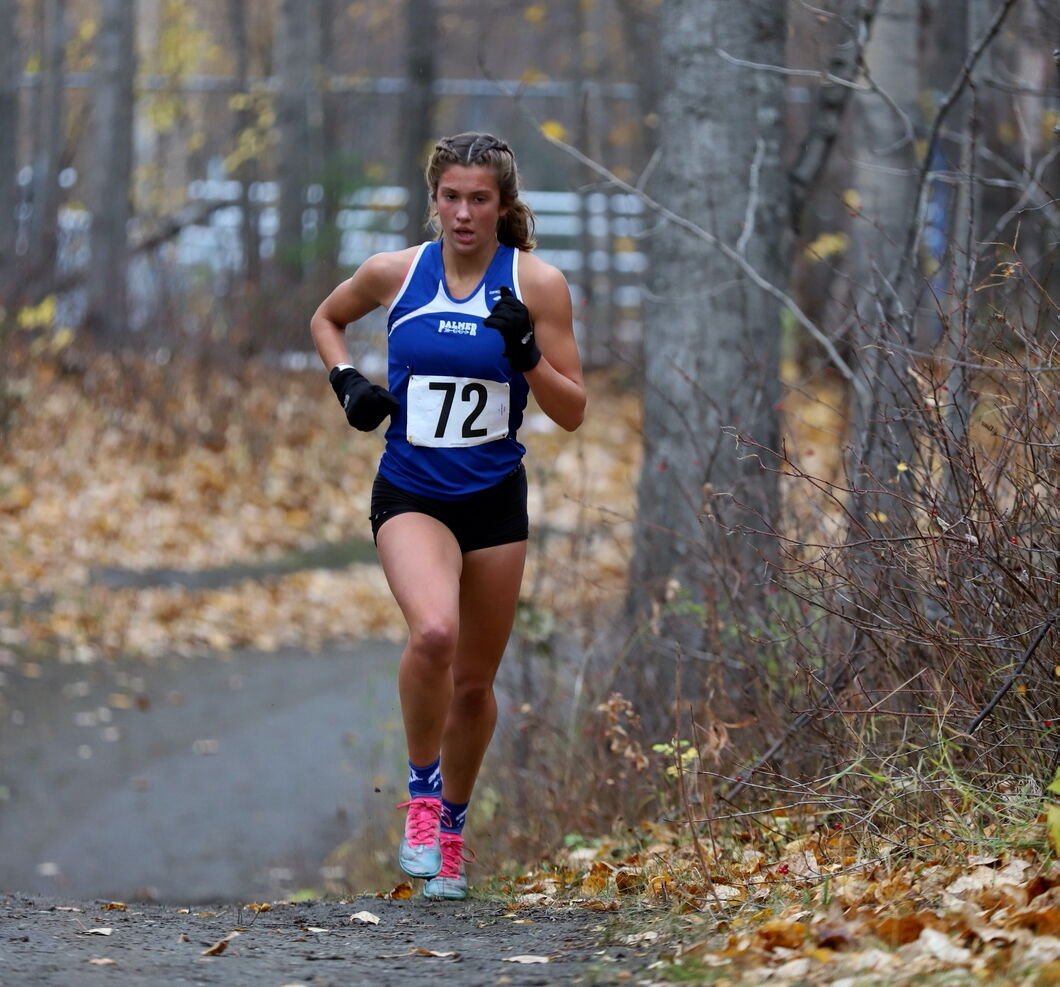 Palmer senior Sophie Wright runs toward a Region III title in the Division I girls race. 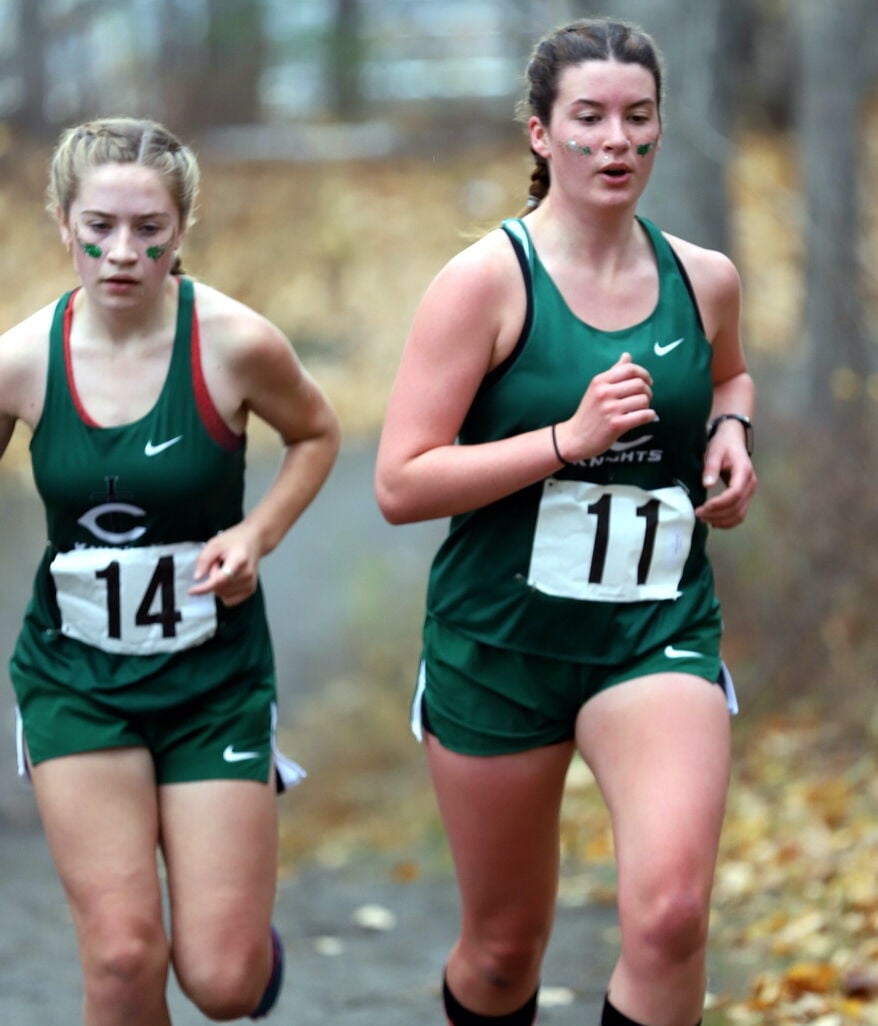 Colony's Lydia Bushey and Lucy Shea compete in the Division I girls race of the Region III Championships.

Palmer senior Sophie Wright runs toward a Region III title in the Division I girls race.

Colony's Lydia Bushey and Lucy Shea compete in the Division I girls race of the Region III Championships.

PALMER — Wasilla High School’s Landon Hayes had been waiting for this moment.

On Saturday at the Region 3 Cross-Country Championships at Palmer High School, Hayes finally won the individual region title with a time of 16:47.39.

Hayes finished third in the region meet last year and entered this season with a target on his back from other runners as the fastest cross-country runner in the Valley. As Hayes crossed the finish line two seconds ahead of his nearest competitor, he let himself feel his emotions, letting out a guttural yell and pumping his fists in the air, realizing that he had achieved his goal.

“When he can pull it all together and when we can give him all the tools that he needs to not only be successful here but to kind of carry on through any other goals and challenges he has, that’s such a highlight,” said Wasilla cross-country coach Leslie Varys.

Hayes hung with the lead pack of runners that emerged from the back field at Palmer High School as the group of 21 Division 1 boys racers entered the trail behind Machetanz Field. At the halfway point of the first lap, Hayes had put himself in the front of the pack. Hayes fended off Palmer senior Mike Reem and a fast pack of Colony underclassmen for three laps, winning his first region title.

“It means a lot because I started this whole season working my butt off and nothing was coming out, and then finally the last race where I wanted it to come out it came out,” said Hayes. “Since at the beginning of the season since I was the top Valley runner last year I had Noble [Gurney] come up and tell me he was going to beat me at the beginning of last season. Everyone was working their whole season saying they’re going to beat me and they did. And then the last race I decided to come back.”

“I’m just thankful that we get another race. Every single race, every single day that we’ve been allowed just really puts things into perspective,” said Varys.

Palmer freshman Fischer Adams came in two seconds behind Hayes and Colony sophomore Zac Cheyette led the Knights with a third-palace finish in 16:58. Cheyette was joined in the top 10 by teammates Tobias Buchanan in fourth, also a freshman, Garrett Streit in fifth and Zachary Daniel in 10th. Adams led the Moose with an impressive finish and was joined in the top 10 by another Palmer freshman, Tobin Miller in sixth, less than one tenth of a second ahead of Palmer senior Mike Reem in seventh. Miller finished in 17:06.72 and Reem clocked a 17:06.84. Junior Ryan Owens finished in ninth for the Moose.

The top eight finishers for the boys earn an opportunity to compete at the ASAA/First National Bank State Cross-Country Championships at Kincaid Park in Anchorage Oct. 10, with Owens and Daniel serving as alternates.

Colony won Saturday’s team title with 33 points. Palmer came in second and Wasilla came in third. When asked what Saturday’s win meant to him, Hayes had a simple answer.

“Everything,” said Hayes. “It’s everything. Next to state, regions is the race I’ve always wanted to win so I’m just happy I finally got it.”

During the Division 1 girls 5k race, Palmer senior Sophie Wright won by nearly 30 seconds over the next closest competitor, clocking a time of 20:13.23. Wright was joined in the top 10 by teammates Madeline Ortiz in fourth and Monroe Swain in 10th.

Of Colony’s seven top 10 finishers, four were underclassmen. The Knights were led by freshman Mariella Belliston in second with a time of 20:38, followed closely by Colony senior She Alaniva in third at 20:41. Lydia Bushey finished in fifth for the Knights, narrowly ahead of Lucy Shea in sixth, followed by Monica Bustillow, Abby Novak and Emma Hopkins. Wright and Ortiz will compete in the state meet next week for Palmer. Colony will be represented by Belliston, Alaniva, Bushey and Shea and Knight teammates Monica Bustillos and Abby Novak will serve as alternates. Wasilla freshman Ashley Palaniuk finished in 14th with a time of 23:36.

In the Division 2 boys 5-K race, Anchorage Christian School senior Tristian Merchant made history with the fastest 5K recorded by a high schooler in Alaskan history with a time of 14:41.32. Merchant set the course record at Palmer High last year as a junior in a time of 15:04. His time of 14:41.32 is the third fastest high school time in the nation this year and the second fastest time in Alaskan 5K history. Merchant is a two time Division 2 state champ. Grace Christian School’s David Sliwinski, Cole Fritzel and Preston Wethington followed Merchant and all clocked times under 17 minutes. Samuel Stapley finished 13th for Houston in 19:02 and teammate Daniel Spencer finished in 15th place with a time of 19:20. Redington freshman Myles Campbell led the Huskies with a time of 20:18 and was followed by freshman teammate Landon Lovely in 18th. The Division 2 boys race was the largest race of the afternoon with 22 runners.

In the Division 2 girls race, 17 runners competed. Valley athletes were led by Redington freshman Mya Campbell in second place with a time of 20:07. Campbell’s Husky teammate senior Anna Stephan finished in 11th at 23:06. Campbell will be the only Valley athlete competing in the state meet next weekend in the Division 2 state championships.