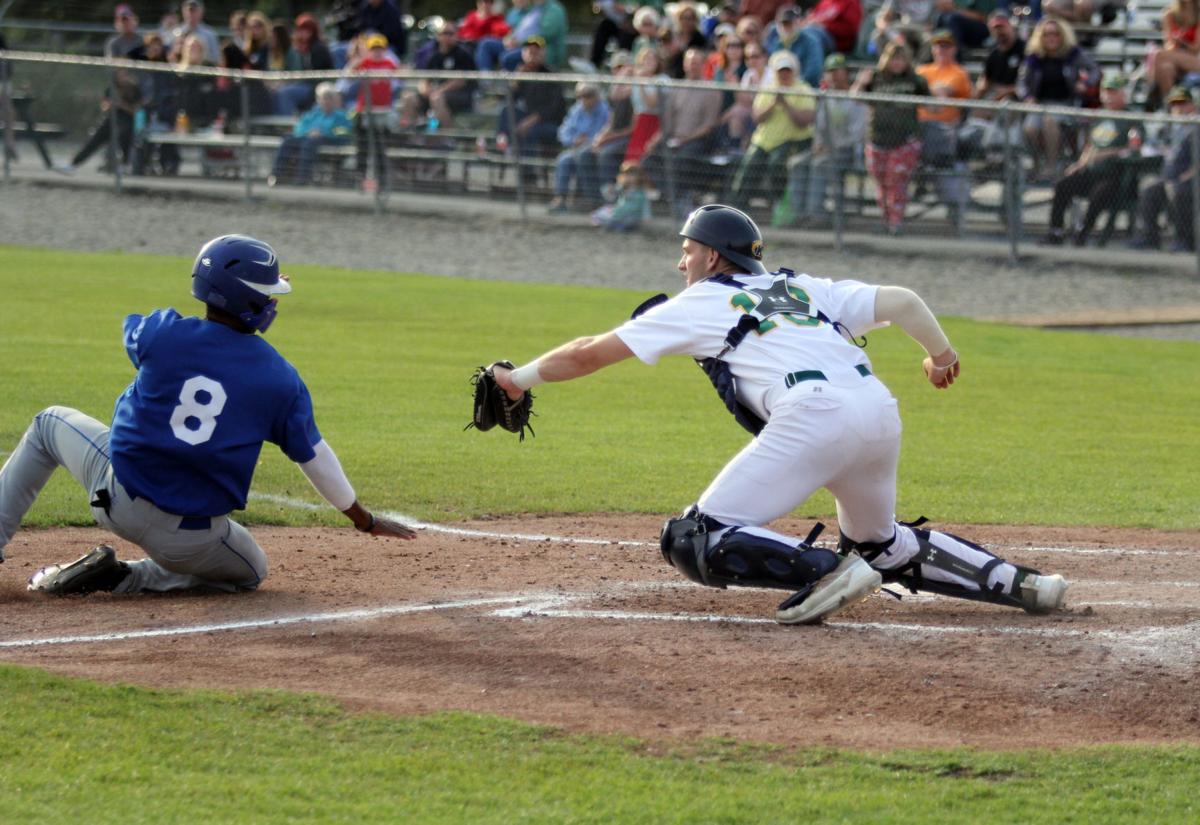 Sam Thompson works to make a play at the plate for the Mat-Su Miners during the 2019 season.

Aaron Walters makes a catch for the Mat-Su Miners during the 2019 season.

Sam Thompson works to make a play at the plate for the Mat-Su Miners during the 2019 season.

Aaron Walters makes a catch for the Mat-Su Miners during the 2019 season.

After a summer season was lost to the COVD-19 pandemic in 2020, the Alaska Baseball League is back and the Mat-Su Miners have returned to Hermon Brothers Field.

The Miners, who open the season Saturday against the Anchorage Bucs at 7 p.m. in Palmer, practiced this week for the first time since 2019.

“It was good to get them onto the field to work out. Let them hit, let them throw,” Miners head coach Tyler LeBrun said Wednesday evening. “I think this is going to be a good one for us this year. It’s good to see what we have so far.”

Miners general manager Pete Christopher said recruiting during the offseason had its challenges. The league’s five teams were unsure if there would even be a 2021 ABL season until early April. Three of the teams — the Anchorage Bucs, Anchorage Glacier Pilots and Chugiak Chinooks — had to wait until the Municipality of Anchorage eased COVD-19 mandate restrictions to know if they could host games. The Miners are also requiring that each player on the roster has received their COVID-19 vaccine. But overall, both Christopher and LeBrun are excited about the group they’ve assembled for the 2021 summer season.

“We’ve got a lot more Division II guys than we’ve ever had before, which is not a bad thing at all,” LeBrun said.

The Miners will have to wait for a handful of them. Five players on the roster are on teams competing in the NCAA Division II College World Series.

“It’s a double-edged sword,” LeBrun said. These Division II guys we have coming are in great programs, but they are all off in the World Series. It’s a bummer we don’t get to see them for a little bit, but it’s awesome for them to go experience that.”

Three of the players on the roster are returning to the Valley for another summer. Kent State catcher Sam Thompson and West Florida pitcher Evan Floyd are starting their second season with the Miners Angelo State infielder Aaron Walters will be with the Miners for the third time.

“I think this will be his best,” LeBrun said. “He’s really thrived this year at Angelo State.”

Walters was named a Division II All-American and helped Angelo State advance to the Division II World Series. He also brings versatility to the Miners. He can be used in right or left field, catcher, first base and designated hitter.

“That’s something that’s really good for us,” LeBrun said. “It always helps when you have a guy like Wally who can play multiple spots.”

Floyd and Thompson both played for the Miners in 2019.

“Evan Floyd is fun to watch. As a starting pitcher (this year) he was dominating,” LeBrun said.

LeBrun said the Miners expect to have Floyd in the bullpen this summer, and could be the closer. LeBrun said he is looking forward to seeing what Thompson can do behind the plate.

“I expect Sam Thompson to come in and be our starting catcher, and really excel and develop,” Thompson said.

“It’s always nice to have local kids,” LeBrun said. “They grew up seeing us play at Hermon Brothers Field.”

Mat-Su currently has 15 pitchers on the roster. A dozen of them are right-handers.

“I’m interested to see how our pitching does,” LeBrun said. “I think it’s going to be more of a pitching staff team effort.”

The Miners also have two catchers, five outfielders and nine infielders. LeBrun and Christopher both said they are excited about their hitters.

“I think we’re going to have more power, more pop,” LeBrun said. “It’s something I’m really looking forward to seeing. That’s something we haven’t had in the last couple of summers.”

LeBrun said the Miners will be a bit shorthanded early in the season. In addition to the group in the Division II World Series, Mat-Su also has players currently on teams in the Division I postseason.

“We’ll plug and play. That’s what we do,” LeBrun said. “It’s a next man up atmosphere and mentality.”

For the complete schedule, see matsuminers.org.