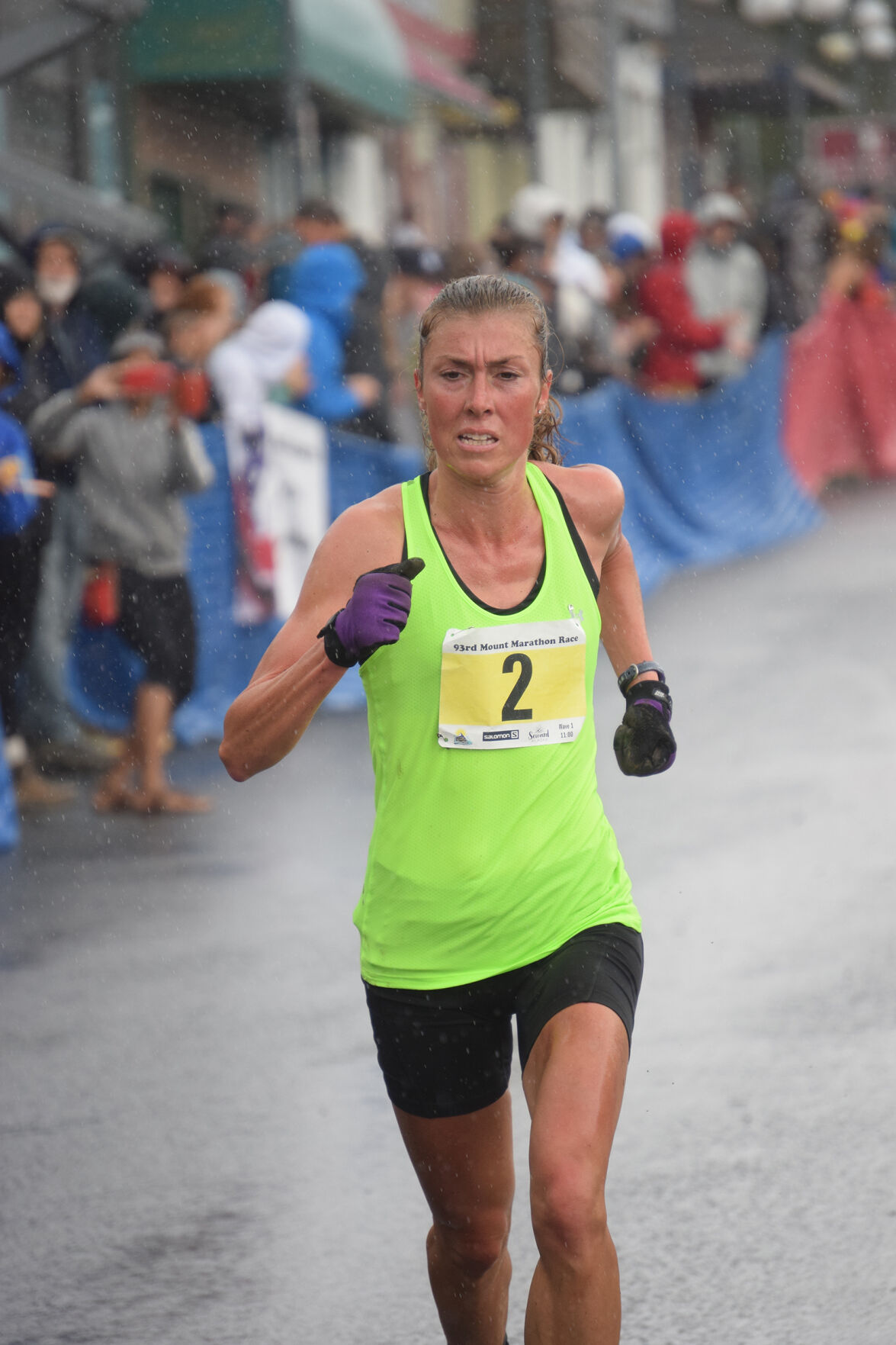 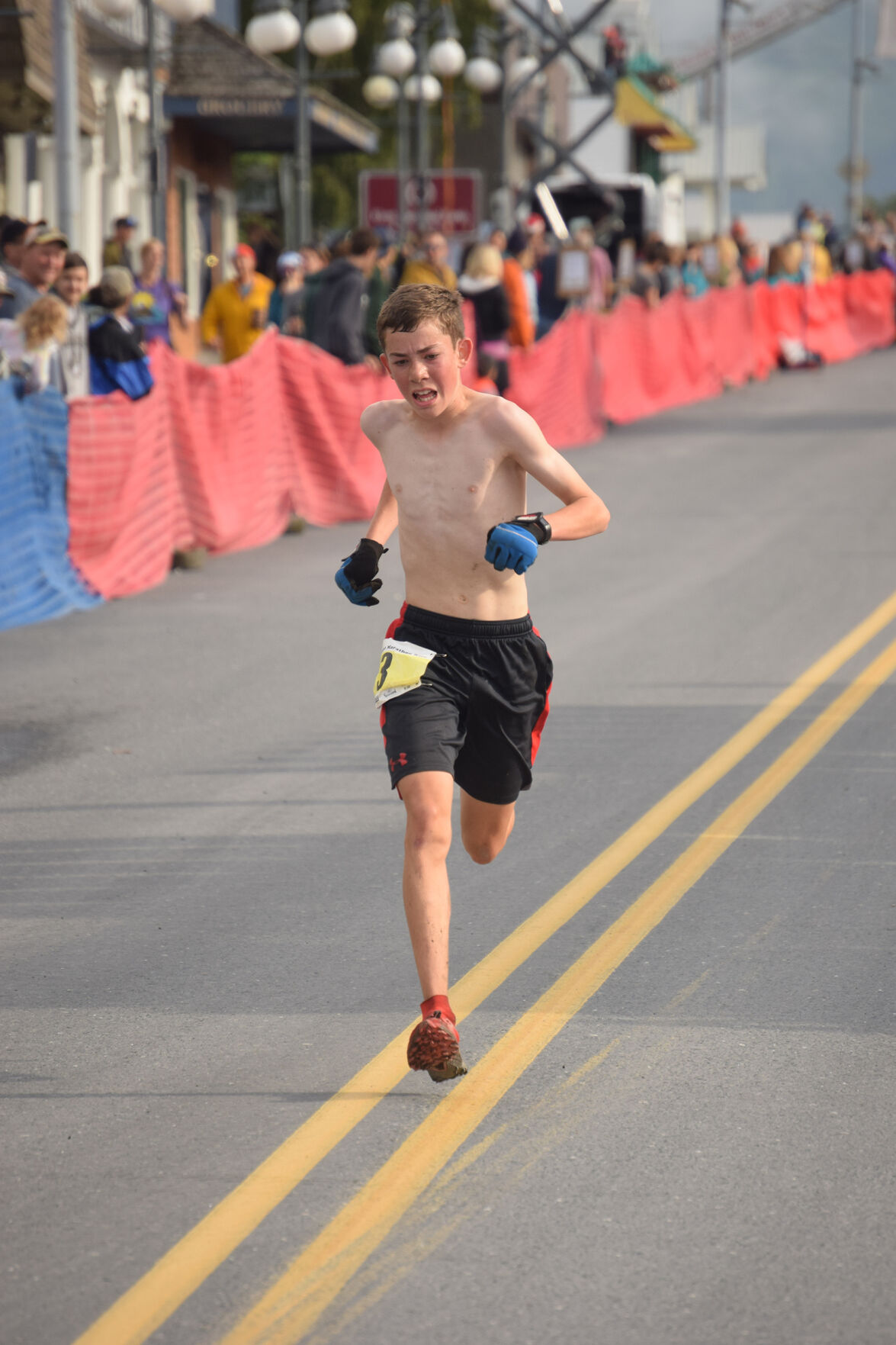 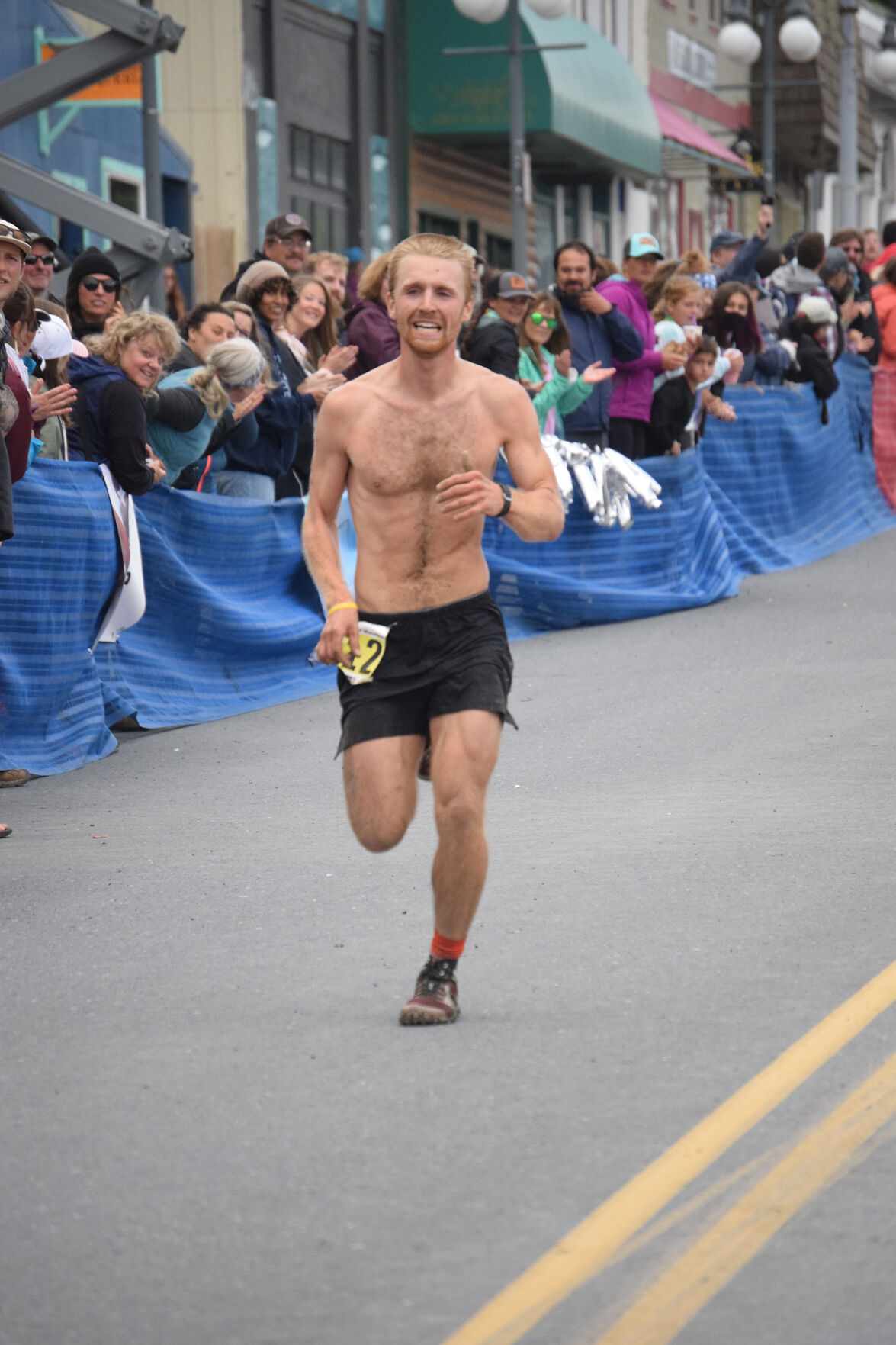 The Mount Marathon Race is back. And so are Hannah Lafleur and David Norris.

Seward’s Lafleur defended her title in the women’s race, while Norris won the men’s race for the third time in three tries, as the 3.1-mile scramble up and scream down the mountain of about 3,000 feet returned to Seward after a pandemic-forced pause in 2020.

The 93rd running came with a wrinkle. Out was the traditional date of July 4 in favor of a midweek, nonholiday July 7. The goal was to keep a lid on the traditional party atmosphere because, as race director Matias Saari told racers in an email, “COVID isn’t over.”

The new date slimmed down the crowd, but didn’t keep away most who love the race, which was first held in 1915.

“These are the true fans,” said Pyper Dixon, 30, of Seward after finishing 10th in the men’s race. “It was a good atmosphere. It felt just as good to me.”

Added Palmer’s Christy Marvin, 40, after finishing third in the women’s race: “I feel like Matias has done an amazing job of keeping the race on, but also keeping it safe for both the volunteers and the racers themselves.”

Lafleur said Olivia Amber, a Salomon-sponsored runner from California who finished 10th, raved about the event at the starting line.

“She was like, ‘This feels electric,’” Lafleur said. “And I was just like, ‘Yea, that’s Marathon. It’s Seward’s favorite day of the year.”

In 2019, when Lafleur became the first local senior champion since 2010, the victory thrilled the town and surprised many in the state, but it didn’t bear all the marks of repeatability.

Lafleur’s winning time of 53 minutes, 24 seconds, was the slowest since 2009 and 34th on the all-time list of women’s times heading into the race.

The effort left Lafleur visibly shaking at the finish line and unable to walk due to damaging her feet on the downhill.

Wednesday, Lafleur was walking just fine after running 51:24, ninth on the all-time list.

“From fluke to freak” was the way the tightknit Seward trail-running community was billing the effort.

“She’s laser-focused out there,” said Johnson, a frequent training partner with Lafleur. “Her brain is her biggest asset. She just takes off and it doesn’t matter what her body feels like.”

“I knew she would be strong on the downhill, but I honestly didn’t know she had one quite that fast in her,” Marvin said.

The race was led to the top by Rosie Frankowski, 29, of Anchorage. Frankowski finished 21st in the 30-kilometer classic ski at the 2018 Winter Olympics.

In 2018, Frankowski also led the race to the top but fell to seventh on the downhill so as not to risk injury and endanger her primary sport. A similar plan had Frankowski falling to fourth Wednesday.

“I had to tell myself before the race just to let Rosie do her thing,” Lafleur said. “She’s such a phenomenal athlete and has such an engine going uphill.

“If I tried to keep up with her, I would have blown up.”

But it wasn’t just Frankowski with her feet in the clouds as Lafleur and Marvin worked together on the uphill.

Ruby Lindquist, a 2018 graduate of Seward High School, was putting the fitness on display that allowed her to set the Black Hills State record in the 1,500-meter run this season as a junior.

Lindquist was seventh in 1:00:20 in 2019 for her previous best performance in the race. She also had only been up the mountain four times in training this year, so she was surprised to hold second all the way to the top of the mountain.

“My collegiate training has been going super well with high mileage,” Lindquist said. “I’ve been focusing on that in the last year and, honestly, it just translated really well.”

But as Lafleur climbed, to loosely quote Bob Dylan, she could smell something cooking, and could tell there was going to be a feast.

“I knew today was going to be the day to open up on the downhill because it’s been wet the past few days,” Lafleur said. “It’s really soft scree. As soon as I got to the top, I was like, ‘Let’s go. It’s time.’”

Lindquist finished second with a massive PR of 51:38, while Marvin ran 52:21 to set the new 40-49 age group record. The two-time champ has now finished in the top three in all eight of her MMR appearances. Frankowski was fourth in 52:56.

Rain visited Seward the night before the race and during the women’s race. While the women said the footing on the muddy lower half of the mountain was OK, the juniors and men said the showers came at the wrong time for them.

“I felt like I was a Ferrari in a mud pit,” Johnson said. “I couldn’t do anything. My heart rate was soaring and I couldn’t get any traction.”

No problem for Norris. As an elite Nordic skier — he bagged two top-20 finishes at the world championships in Germany in March — Norris is used to adjusting to sticky or unsticky conditions on the fly.

“I just started turning my wheels,” Norris said of the lower mountain. “I was like, ‘I should just settle in and save myself for when I get out of the trees.’”

It all comes as Norris looks to come back from a positive COVID-19 diagnosis in November 2020 to make his first Olympics this winter. Norris took the first half of the ski season off this winter to recover.

“I think I’m in a good place with how last winter worked out,” Norris said. “I kind of finished the ski season not fried so I was able to jump into training in April.”

Norris’ path to Beijing is tougher because, despite his impressive results in World Cup distance events, he once again won’t be a funded member of the U.S. Ski Team.

With so much on the line, why risk Mount Marathon?

“This is a big race,” he said. “It’s nice in the summer to touch into that. It’s good practice to throw down when it counts.

“And then it’s just awesome to be part of this great event with all the guys out here. It makes me happy and it’s something to train for early in the summer.”

Johnson, who lost his hold on the 40- to 49-year-old age group when Palmer’s Ben Marvin finished eighth, said he likes the out-of-state Salomon competition, joking that he’ll only continue to like it “as long as I stay in the top 10.”

“Dakota was ahead of me at the halfway point, so I head incentive to try and get him,” Johnson said. “I ran hard, and maybe ever harder than I might have.”

For Dixon, the 10th-place finish was vindication after finishing 23rd at the Robert Spurr Memorial Hill Climb on Bird Ridge in Anchorage on June 20.

Dixon said he has been good about restructuring his life for the past few years to train for Mount Marathon, but this May and June he worked long hours at jobs in Anchorage and Seward.

After the Spurr Climb, Dixon took 10 days off to tame his exhaustion.

“To come back from Bird Ridge and feel strong today is the best feeling,” Dixon said.

The junior races were not held in 2019 due to wildfire smoke and 2020 due to the pandemic, so it was no surprise two new champs were crowned.

Papillon said mud made the uphill tough, but even more concerning was the way Marvin made up ground on the downhill.

“I heard the wave of cheers behind me as someone was coming down,” Papillon said.

That turned out to be Marvin. Christy, Coby’s mother, said Coby was disappointed Papillon had gained about 10 seconds taking a different route down the cliffs at the base of the mountain.

But mother knows best. Christy said she’s familiar with the spot and would rather have her son take the safer way down.

“The way that I showed you is the way I want you to take,” Christy said. “I don’t care if you beat me there.”

Papillon has one year left in the junior race for a rematch. Papillon said he will take aim at Bill Spencer’s 1973 record of 24:30.

The girls race went to Anchorage’s Lucy Young, a 17-year-old graduate of South. Young normally spends her summers in Port Alsworth, so this was the first time she did the race.

Young said she thought the race got off to a slow start — normally a good sign when you are running a race.

“It didn’t seem slow to me,” Boonstra said.

Young took control of the race early and was never challenged.

Boonstra also was doing the race for the first time, having hiked the mountain just once to prepare. She will have two more shots to match the junior title of her sister, Riana. Jayna’s father is Todd Boonstra, the four-time men’s Mount Marathon champ.

Ellyn Brown of Anchorage extended her women’s record of consecutive finishes by taking 91st in 1:14:31. Anchorage’s Chad Resari, 85, became the oldest finisher by taking 253rd in 2:29:23.