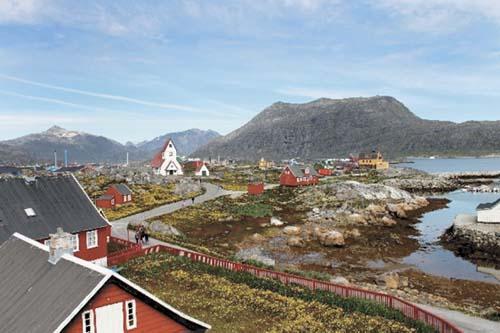 Photo courtesy Katie Eberhart Nanortalik, Greenland, one of the stops on the Students on Ice Arctic expedition. 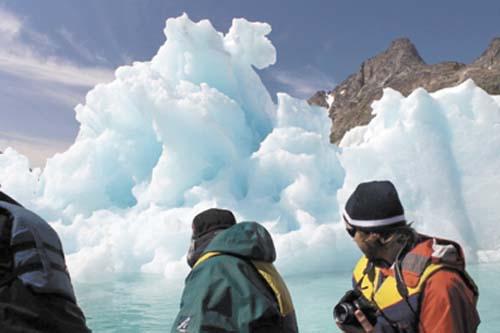 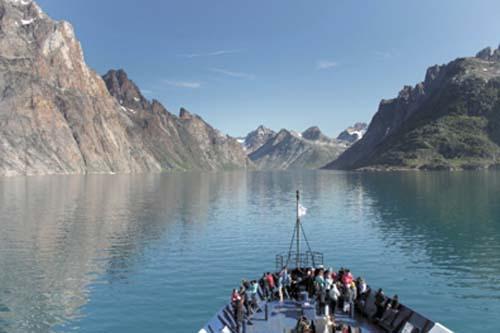 Photo courtesy Katie Eberhart Nanortalik, Greenland, one of the stops on the Students on Ice Arctic expedition.

“Blue whales on starboard” coming from the loudspeakers brought everyone hurrying on deck.

The ship slowed and turned, and we watched the whales’ leathery-looking fins and thick backs slide above the gray-green water. Now and then, spouts like small geysers marked the location of the mom and its calf. All of us on the Students on Ice Arctic expedition had just seen the largest mammal that has lived since the dinosaurs.

I have been interested in the Arctic for quite some time and this summer traveled to Iceland, Greenland, Labrador and Nunavik with Students on Ice, a Canadian organization that has been teaching high school students about the Arctic for more than 10 years. The expedition had 75 students from 16 countries, including Canada, the U.S., Iceland, Greenland and as far away as China, Hong Kong and Vietnam. We also had a staff of 45 scientists, artists, educators, historians, writers, Inuit elders and polar experts.

With an introduction from Lt. Gov. Mead Treadwell to Geoff Greene, director of SOI, and having sent my resumé and a letter of application, I received an invitation to join the SOI expedition as an economist and writer. While traveling with SOI, I worked with students on techniques of writing about their experiences and assisted with structuring and implementing a mock Arctic Council exercise where students discussed formally — using Arctic Council rules — serious issues facing the Arctic today. An especially heated discussion concerned the need for healthy economies in the Arctic and resource development versus tourism.

On July 23, the Students on Ice expedition departed on a red-eye flight from Toronto, Canada, to Iceland, arriving the following morning fatigued but excited to begin a 16-day Arctic trip by soaking in a geothermal pool. The Blue Lagoon near Reykjavik was both touristy and spa-like, and the water, frothed by wind and rain into white-capped waves, was more invigorating than soothing. By the afternoon though, we were walking beneath a sunny sky on Parliament Plains, the site of the oldest parliament (founded in 930) that still exists today. It is also a region of tremendous geologic force where the Eurasian and North American continental plates are splitting apart. For several days we toured Iceland by bus, with landscapes of lush pastures and hay fields reminded me of the Matanuska Valley. There were also huge waterfalls, ancient craters and geysers that spouted in steamy columns.

Traveling to a place you have never been, you learn new things. We learned from Ari Trausti Guðmundsson, our guide who had gray hair and patiently answered each question, about history and geology, and that the only wildlife on and around Iceland is Arctic fox, mice, whales, birds, reindeer and rats. Missing from the list were large predators like bears and wolves, which helped explain the many sheep we saw on unfenced mountainsides. But it was polar bears that everyone hoped to see, and after several days in Iceland we boarded the ship Clipper Adventurer to sail to Greenland.

The 100-meter-long vessel seemed like a large ship to me, but it wasn’t large enough to avoid a near epidemic of seasickness as we crossed the Denmark Strait where the ship climbed each swell then tipped into the trough with a huge crash and a gigantic V-shaped splash. From inside the main lounge (our education and presentation room with computers, a projector and large screen), it sounded as if the ship was breaking. After a couple days of much on-ship misery, nearing Greenland the ocean became quite flat, the seasickness abated and we encountered ice that had been carried by ocean currents from high in the Arctic.

The captain brought the ship to the edge of the ice (both floes and bergs) that blocked access to the fjord that had been our destination. Instead, we sailed around Cape Farewell, the southern tip of Greenland, to try again to enter a fjord along the southwestern coast. The next morning, we all waited anxiously to see whether the fog would lift and, indeed, by midmorning our vessel had entered a fjord that linked Prince Christian Sound from the west. Everyone came on deck, mesmerized by the high mountains of sheer and mineral-streaked rocks. We were traveling up Nûp Kangerdlua, a fjord that had been covered by glacial ice less than 50 years ago. Within this stark landscape, scattered clumps of bright pink dwarf fireweed seemed especially startling.

The ship anchored near the end of the fjord and the Zodiacs were launched. Seated on the inflated side of a Zodiac, you could hear a constant hissing and crackling of air escaping from melting pieces of ice (called bergy bits), but then also the thunderous booming of ice cleaving from the face of the massive tidewater glacier. The young people on our Zodiac fished bergy bits from the water, inspecting and even tasting the chunks of transparent and slippery ice. In Southcentral Alaska over just a few decades, I’ve seen how glaciers like the Matanuska, Portage and Columbia have shrunk, and now I’ve also seen that it’s no different in Iceland, Greenland and Labrador.

Our final stop in Greenland was Nanortalik, a town located near ancient Viking ruins with a name meaning “place of the polar bears.” Descending the gangplank, we were enthusiastically met with high fives from a group of young boys and walking into town, everyone smiled and nodded greetings. Nanortalik depends on fishing, seal hunting and tourism, and what you notice is older apartment buildings in drab colors, but also brightly painted steep-roofed houses that stand out all the more because of the low, treeless hills. Several icebergs floating in the bay seemed curious on the warm August afternoon. Our group clustered with townspeople on a grassy hill overlooking a calm inlet.

After official greetings and a short speech by Geoff Greene (translated between English and Greenlandic, or maybe Danish), two Nanortalik men launched kayaks and demonstrated maneuvers, finishing by rolling the kayaks seven times in unison. Use of the woman’s boat was demonstrated by several women, children and an old man who wore traditional Inuit sealskin garments. The high-sided umiak was pushed into the bay and the silhouette against the water made you think about how life might have been in a much earlier time. From our group, several educators and students performed Inuit drum dancing, songs and throat singing, which is an evocative way two women tell traditional stories of life and the environment.

Nearing the end of the expedition, we sailed through the short Arctic night across the Davis Strait for Labrador, arriving the next day at the Torngat Mountains Base Camp and Research Station. At the camp, we met Canadian park officials, researchers and Inuit elders and youth, and shared a picnic dinner that was country food (including Arctic char and caribou) and salads, hot dishes and hamburgers served on the beach by the ship’s staff.

The Torngat Mountains is habitat for polar bears and black bears, and always the first Zodiac to land carried people armed with rifles or shotguns who spread out up the hills to search and keep watch for bears. One afternoon in a Torngat Mountains fjord we saw polar bears, females with cubs — one of which hid with her young in a large patch of alders, poking her head out from among the leaves to watch the Zodiacs cruise along the shore.

Coming from Alaska and traveling with Students on Ice, I saw much that was familiar in aspects of the mountains, the long summer days, alpine plants and wildlife. On this expedition I expanded my knowledge of remote Arctic places and it was a privilege to travel with young people who ask hard questions about the Arctic and the future. Only some questions could be answered by expedition staff; other questions had no answers, and those questions were the most troubling.

More information about Students on Ice can be found at studentsonice.com.