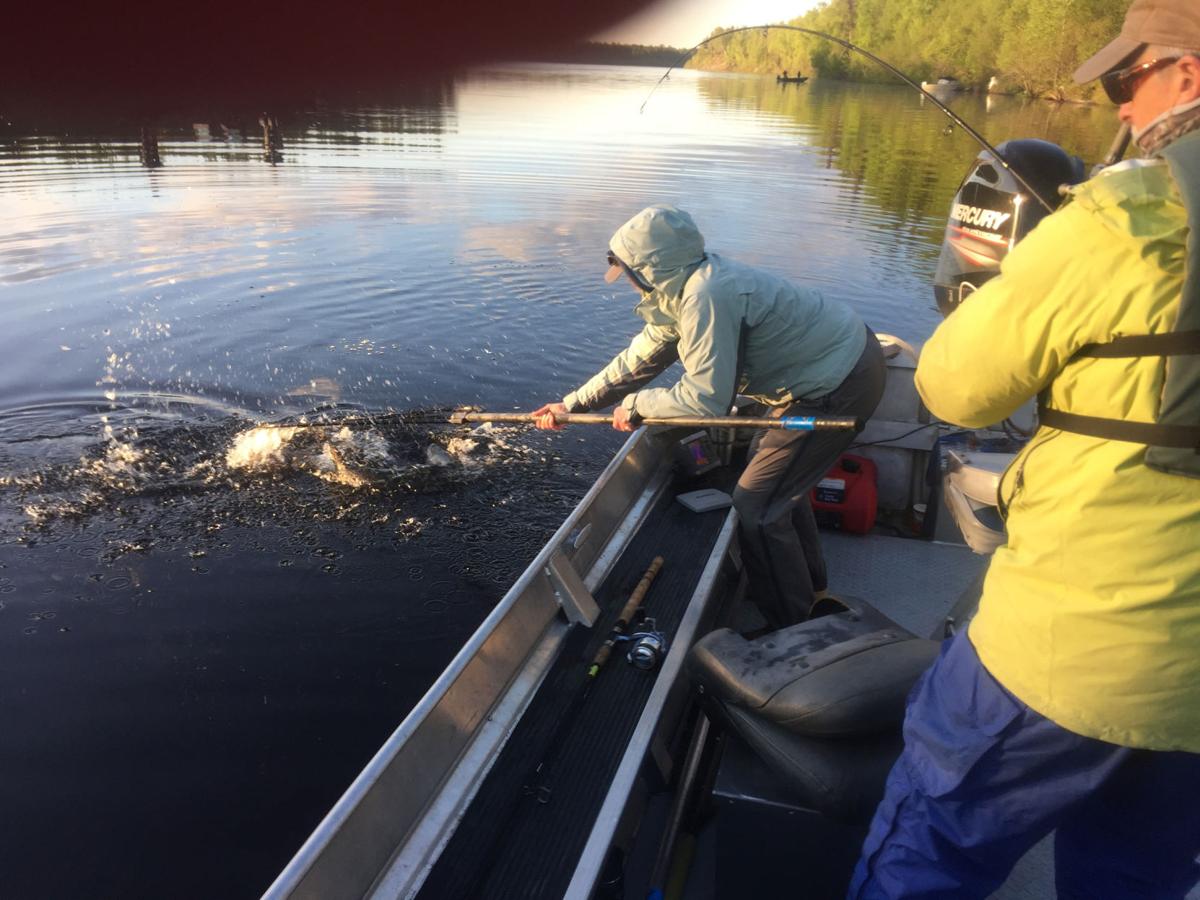 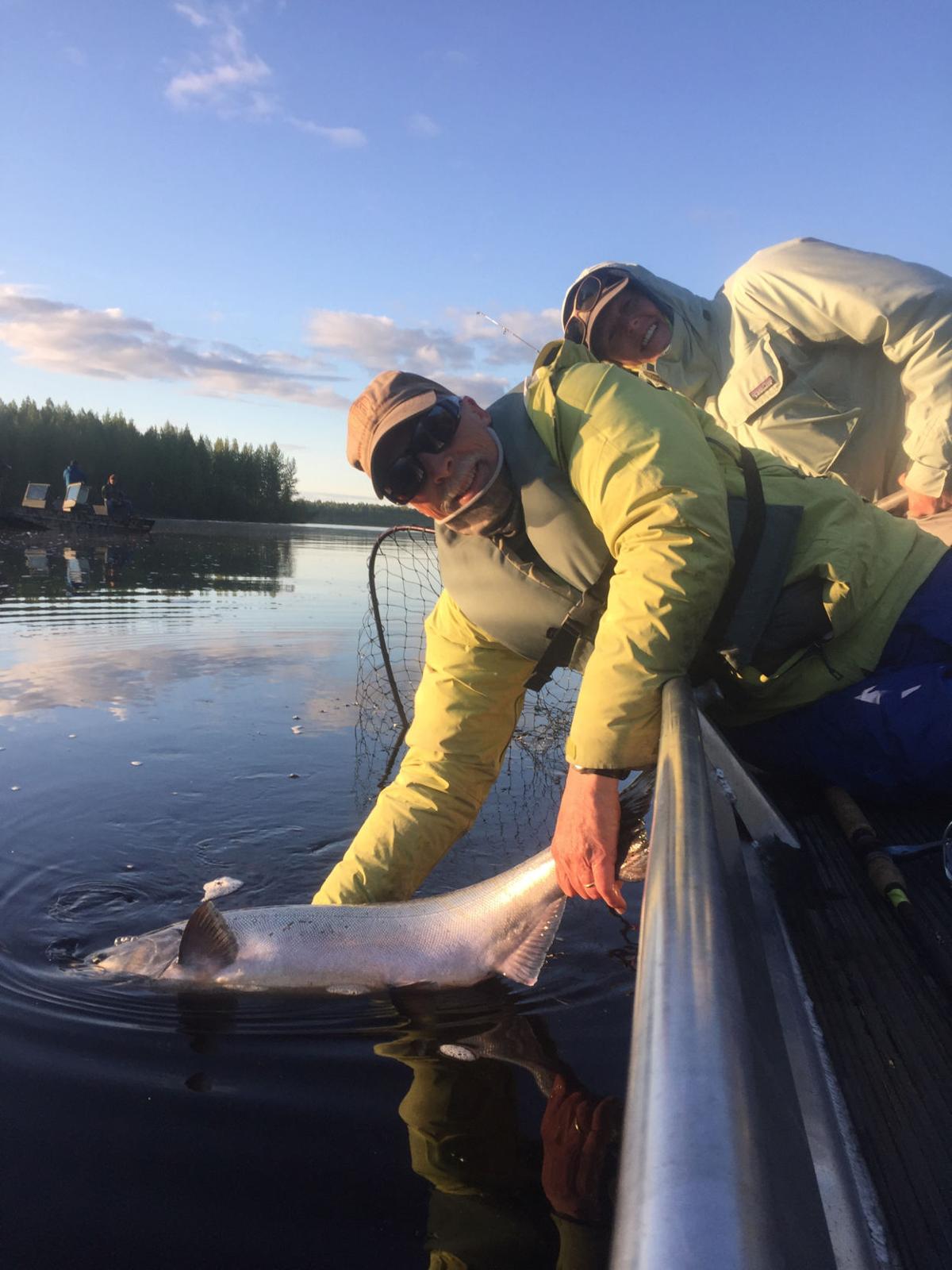 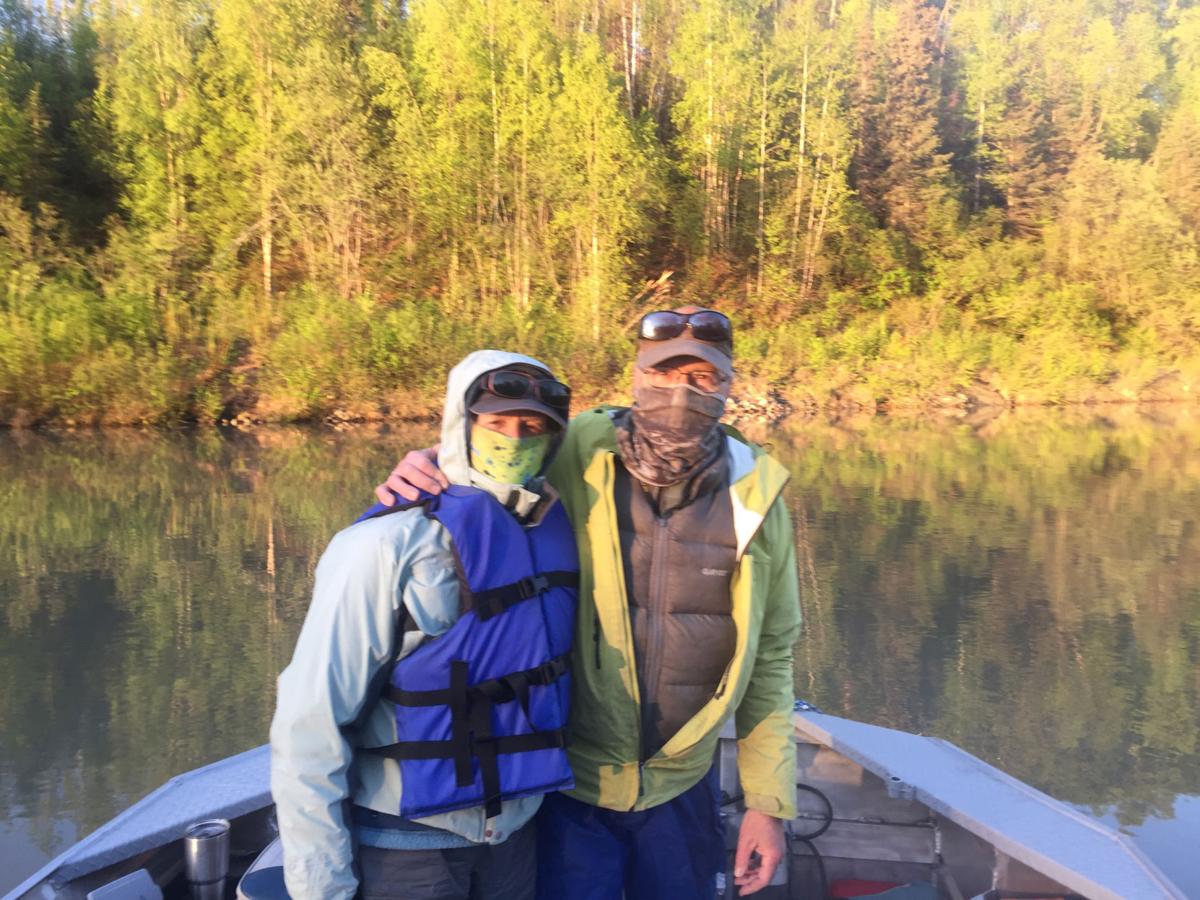 This week I heard of king salmon being caught over Memorial Day weekend at Deshka River, Little Susitna River, and Eklutna Tailrace/Knik River. These are what will likely be the most popular Mat-Su Valley sport king salmon fisheries at least through most if not the entire month of June. Fishing was slow at each of these locations, and hampered by high water at Deshka River and Little Susitna River, while Eklutna Tailrace/Knik River was likely partially hampered by low water.

Mike Hudson, with 3 Rivers Fly and Tackle in Wasilla, told me of the most fish being taken over the weekend at Deshka River, Mike estimated he had heard of somewhere between 15 to 20 king salmon caught at Deshka over the weekend. Everyone I talked to mentioned that fishing pressure was light at the Deshka, especially for a big holiday weekend. That is not surprising considering Deshka River is much higher than normal, the fishery is restricted to single-hook artificial lures, and any king salmon caught must be released immediately without removing it from the water. Next factor in the large number of visitors that have avoided coming to Alaska in light of the 14-day quarantine in place mandate. As a result I know of zero Mat-Su guide services with very many king salmon fishing reservations for the 2020 season.

I consider Deshka the very best opportunity to catch king salmon at this time. Even though the water is high and faster flowing than normal for late May, kings are being caught near the Deshka River confluence with the Susitna River. I fished the Deshka on Wednesday morning the week with Dan Suprak and his wife Cilla. Preparing to leave Deshka Landing at 5:45 a.m. was strange to say the least in that the whole time we were in the launch lagoon we did not see a single other boater, vehicle or boat. We arrived at the mouth of Deshka River just a few minutes before 6 a.m., and with only two other boats at that location there was plenty of room for us to find out own prime water to fish. At 6 a.m. we started casting and retrieving spinners, and on his third cast Dan Suprak was the first one to hook up. There is nothing like hooking onto an ocean-fresh king early in the season, and Dan’s fish provided a great fight, even surfacing a couple times where we could see it was a larger than average Deshka River king salmon. Dan’s steady give and take pressure eventually tired the fish, and he was able to lead it toward the boat, where Cilla scooped the approximately 20 pound chrome king with the landing net. With the fish in the water and Cilla holding the rod and net, Dan was able to unhook the single hook, cradling the fish in the water briefly for a quick photo as it recovered from the fight, and then releasing it to swim off in the cold water. We saw a few king salmon surface, and I felt a salmon grab my spinner next. The fight did not last as long, but the fish was not as big. Just as chrome as the first king, he looked to weigh between 10 to 12 pounds to me. We repeated the unhook, cradle, snap a picture and release. We casted near more surfacing salmon, and watched a couple more boats arrive and start fishing. Anglers in a boat just below us caught a couple king salmon, and then aside from seeing some surfacing fish, the action for the most part seemed to be over. After a while we pulled anchor and trolled up to another casting spot. We had observed king salmon surfacing at this spot, but had to boat a ways to get into casting distance. I felt a strong grab on one of my presentations, however, this time the single hook did not grab hold. Repeated casts to the same location could not draw another strike. Next we moved about half a mile upriver, where we once again saw salmon surfacing within casting range, but we failed to draw a single strike.

Changing activities we took a boat tour to the Alaska Department of Fish and Game (ADF&G) weir site. Cruising up the river we saw multiple bald eagles flying or perched along the river. The water was so high and swift at the ADF&G salmon counting weir site, that staff had not even begun to install the weir in the river. Talking with a department spokesman at the Palmer ADF&G office this week I learned the Department was hopeful the higher and swifter Deshka River water flows would subside enough that the staff could install the weir sometime in early June. It seems entirely likely some undetermined number of king salmon will swim past the weir site without being counted before weir installation. The hope that Deshka River may open to king salmon harvest sometime in mid or later June, is based on ADF&G counting enough king salmon passing the weir to ensure the Deshka River king salmon spawning escapement goal may be achieved. For that reason, many Deshka anglers are hopeful weir installation may occur as soon as possible. At the same time ADF&G staff need favorable enough water conditions to ensure safe weir installation.

Mike Hudson heard a report of at least a couple king salmon being taken from this fishery over the holiday weekend. As mentioned in previous column this is the only Mat-Su Valley location where sport anglers are allowed to harvest king salmon at this time, but there is only a limited area where legal king salmon fishing is allowed. Fishing will likely be slow, but catch numbers should continue to rise during the first week of June. This it the only Mat-Su Valley stream fishery for ocean-run king salmon where multiple hooks, bait, and 24-hour per day fishing is allowed. Plan on seeing other participants at this fishery, likely in fairly confined quarters, but remember to practice appropriate social distancing. There are multiple trash containers at this location, so please help maintain the beauty of this location for all participants by properly disposing of trash. Note: free daily parking and public use is available at this site, lets do our best to keep it that way.

ADF&G’s Little Susitna River salmon counting weir has been installed since May 12. With high water, strong stream flow, and limited visibility in the water it was a difficult install, so I would like to publicly thank ADF&G area management biologist Sam Ivey for the department’s efforts to get this weir installed early enough to ensure the most accurate possible count of king salmon during the 2020 season. The natural water flow pattern at Little Susitna River facilitates earlier installation at Little Susitna River compared to Deshka River, and the department focuses on this effort at both locations each year these important projects are conducted. Since installation the first 3 king salmon have been counted past Little Susitna River weir through Tuesday May 26. Stream flow is high and darker colored with less in water visibility at this location compared to Deshka River.

I fished Little Susitna River on Monday with my friend Lloyd McDaniels and my nephew Daniel Warta. We fished holes for approximately 13 miles below the weir sanctuary sign for 10 1/2 hours and were only able to catch a single rainbow trout. That trout was the only solid bite our group had, and during the time we were fishing we only saw three other groups of boaters on the water. People in one of those boats told us they had caught a king salmon. Fishing conditions are tough at this location, however, my friend, nephew, and I would not have continued to fish for 10 1/2 hours if we did not believe there was a reasonable chance of catching a king salmon. With rain over the holiday weekend the water has been rising since we fished the lower river out of Little Susitna River Public Use Facility Campground and Boat Launch. Note: Fees are required to launch boats, camp, or park at this location, but it is also one of my favorite Mat-Su Valley locations to fish for salmon. Although we did not hook any king salmon, we saw several moose, bald eagles, and waterfowl along the river during our trip on Monday. Experienced Little Susitna River anglers will likely catch some king salmon at this location during this coming weekend and first week of June, however, fishing conditions are challenging so knowledge of how and where to fish the high water flows are often a key to success.

For those who live to fish for king salmon, conditions may be challenging, but the freshwater season only last a short time each year. Good luck and Fish On!