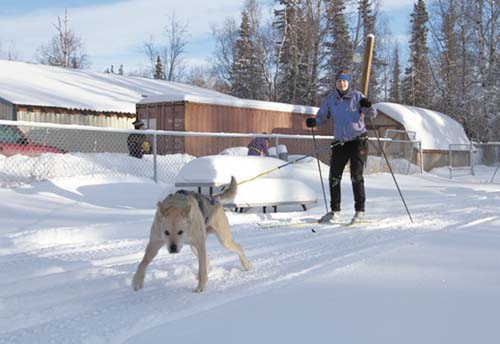 Instructor Kirsten Ballard shows students how she and her 11-year-old sled dog, Indy, skijor around a short loop at The Better Companion Feb. 5. Ballard served as instructor for a North American Skijoring and Ski Pulk Association beginning skijor clinic. 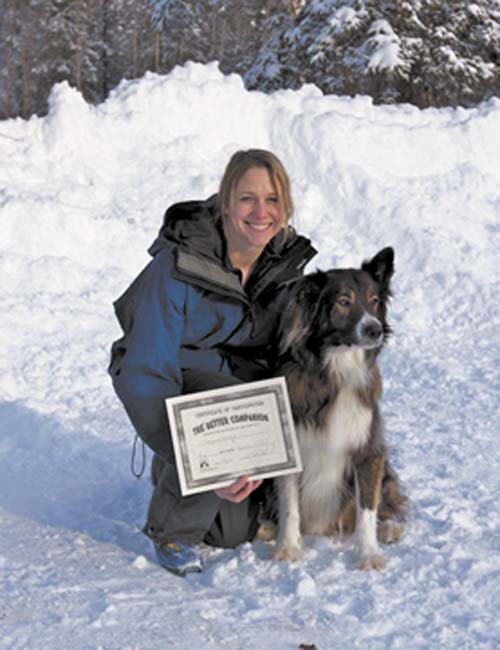 Palmer resident Becky O’Neal holds up a certificate she and her dog, Max, received Sunday during a skijor clinic at The Better Companion. O’Neal said before the clinic Max prefers staying in the car to getting on the trail.

Instructor Kirsten Ballard shows students how she and her 11-year-old sled dog, Indy, skijor around a short loop at The Better Companion Feb. 5. Ballard served as instructor for a North American Skijoring and Ski Pulk Association beginning skijor clinic.

Palmer resident Becky O’Neal holds up a certificate she and her dog, Max, received Sunday during a skijor clinic at The Better Companion. O’Neal said before the clinic Max prefers staying in the car to getting on the trail.

The winter sport of skijoring — it comes from a Norwegian word that means “ski driving” — hooks a person on skis to a dog wearing a sled-dog harness by way of an elastic tugline that connects the dog’s harness to a wide belt around the person’s waist.

Max belongs to Palmer resident Becky O’Neal, a speech pathologist with the Mat-Su Borough School District who tried to skijor with her dog a few times but found he hated it.

“He thinks he’s too beautiful to work,” O’Neal said. “We also call him Fabio.”

And that’s why she found herself spending the morning of Super Bowl Sunday at a skijor clinic held at The Better Companion dog training facility on Fairview Loop Road. Claudia Sihler, a veterinarian and dog trainer, and her dog musher husband, Frank, run classes at the facility.

Frank Sihler was on hand last Sunday, but it was instructor Kirsten Ballard who put the dogs and their people through their skijor paces at the North American Skijoring and Ski Pulk Association beginning skijor clinic.

Ballard is the only woman to have competed in the Iditasport Extreme Skijor Race, a 350-mile winter wilderness endurance test. She competed internationally on a skijor team and competes in sprint-racing events with her trail-tested canines.

Enthusiasm is the single most important quality to share with your dog if you’re learning to skijor, Ballard told the class.

“Attitude is everything,” she said. “This has got to be the funnest, greatest thing they’re going to do. Don’t even feel frustrated.”

• Use treats or some other reward often at first, even if the outing only lasts a few minutes and you travel only 100 yards.

• Train your dog with commands: “gee” for “right” and “haw” for “left; “on by” to keep your dog from stopping if another dog or distraction appears; and the all-important “whoa” to get them to stop.

• Get good gear, including a belt at least 3 inches wide or a quick-release line for less experienced skiers or skijorers.

Margaret Volz, a Wasilla resident, came to the class with her trained therapy dog, Jackson. Volz said she wants to be able to ski with the 3-year-old black Lab mix around Anchorage, where she works at Alaska CARES.

“I love to ski and would like to be able to go on more trails, whether he’s pulling or we’re just skiing together, just to keep him closer,” she said.

After an hour or so, the group moved outside, clicked into their bindings and clipped into their dogs’ harnesses. Despite her obvious skills, Ballard had her hands full with the chaos that resulted when the four novice skijor students — and their equally green canine companions — hooked up and hit the snowy loop trails outside.

Dogs stopped to eat snow or get acquainted in that way dogs have. They veered off trail to sniff class observers. Skiers stumbled as they adjusted to the tricky balancing act of keeping on their feet with a dog attached to their waists.

Things improved quickly as Ballard yelled instruction — “Keep going!” — and called dogs to make sure they stayed on track. A 10-year-old German shepherd, Pepper, proved to be one of the best pullers of the bunch. Therapy dog Jackson started getting over his fear of getting run over.

O’Neal and Max did slow loops around the property. It didn’t look like Max was pulling much at all. But he was moving, he was in front, and he looked happy.

“Good boy,” O’Neal told him, making use of Ballard’s enthusiasm tip. “Look at you trotting!”