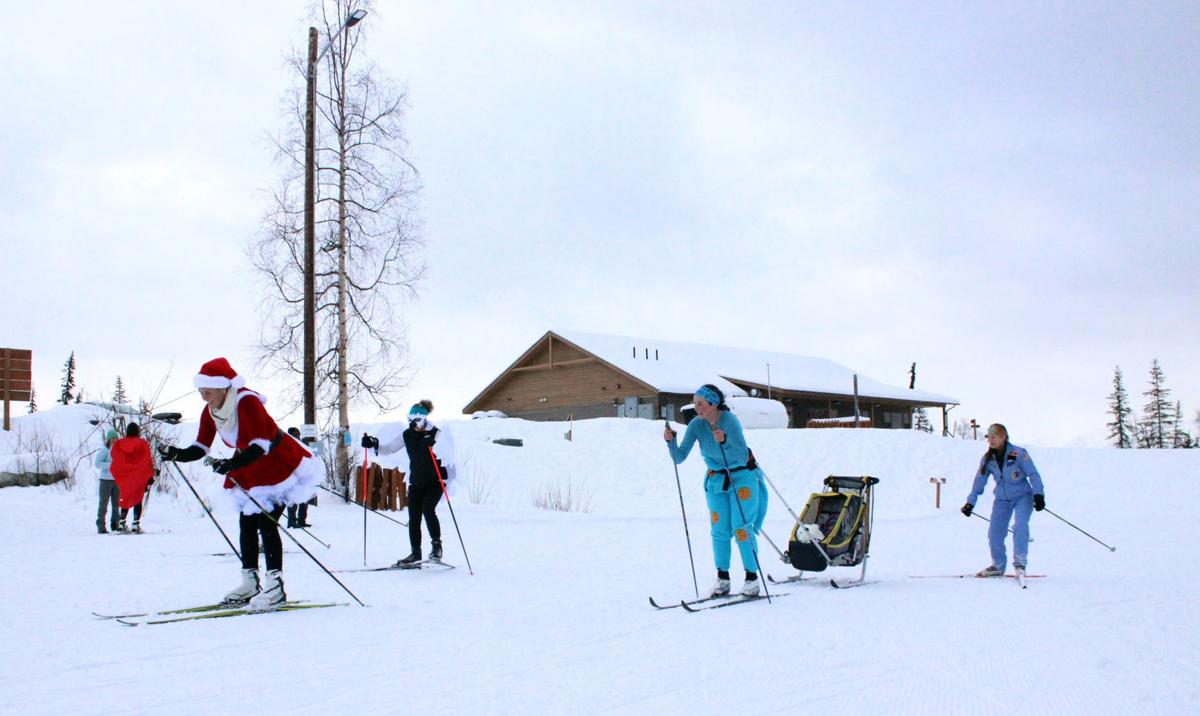 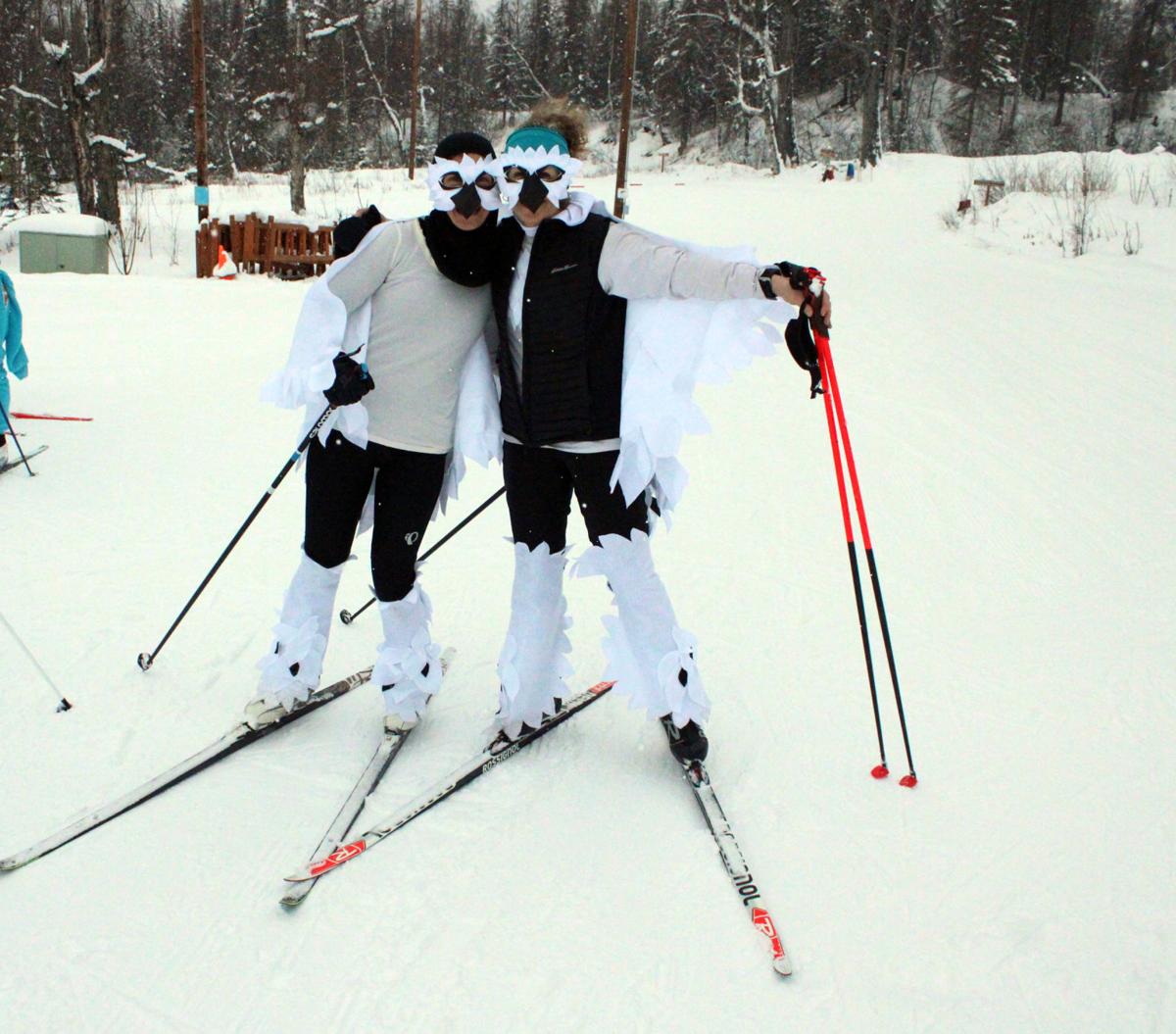 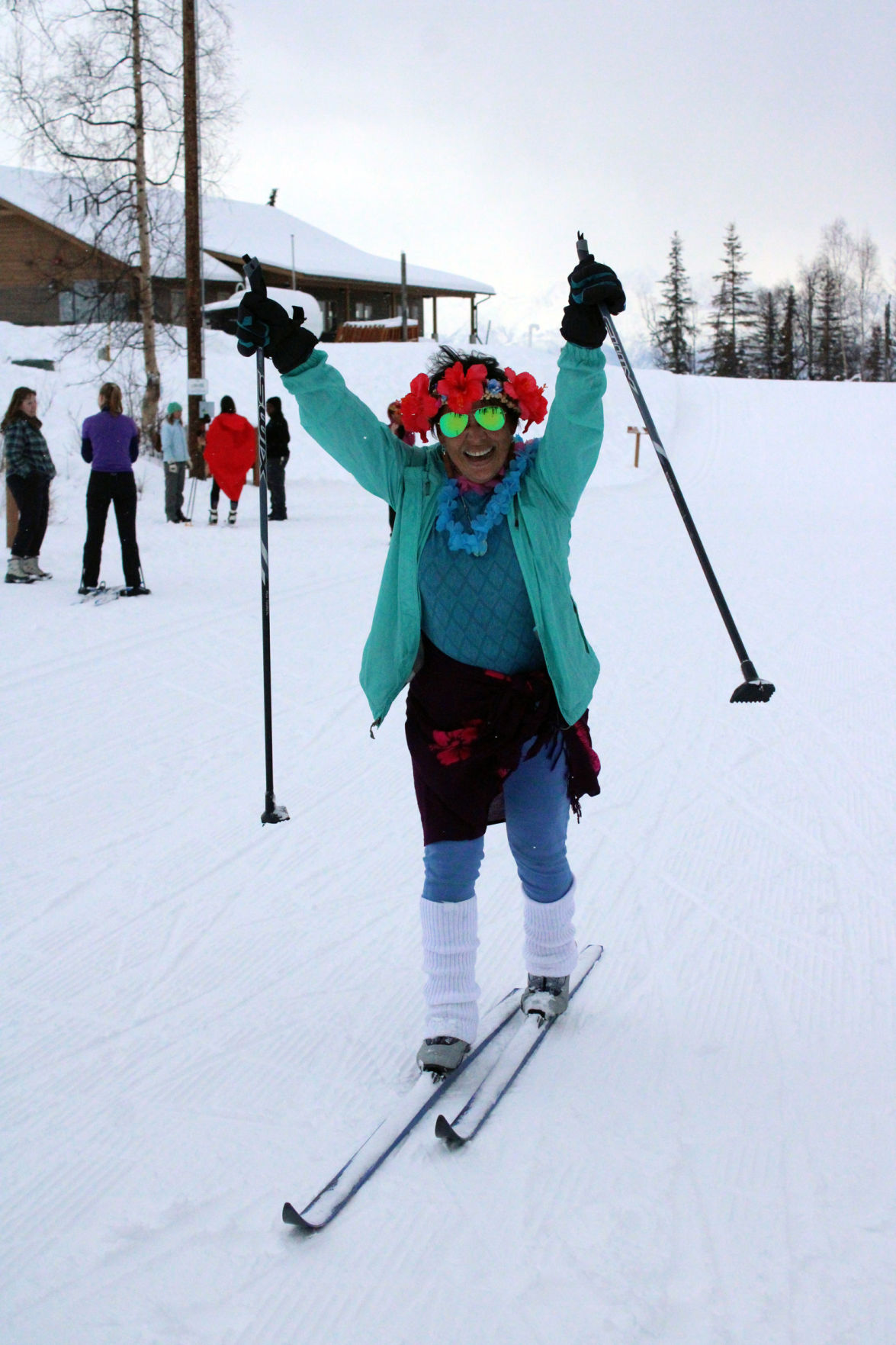 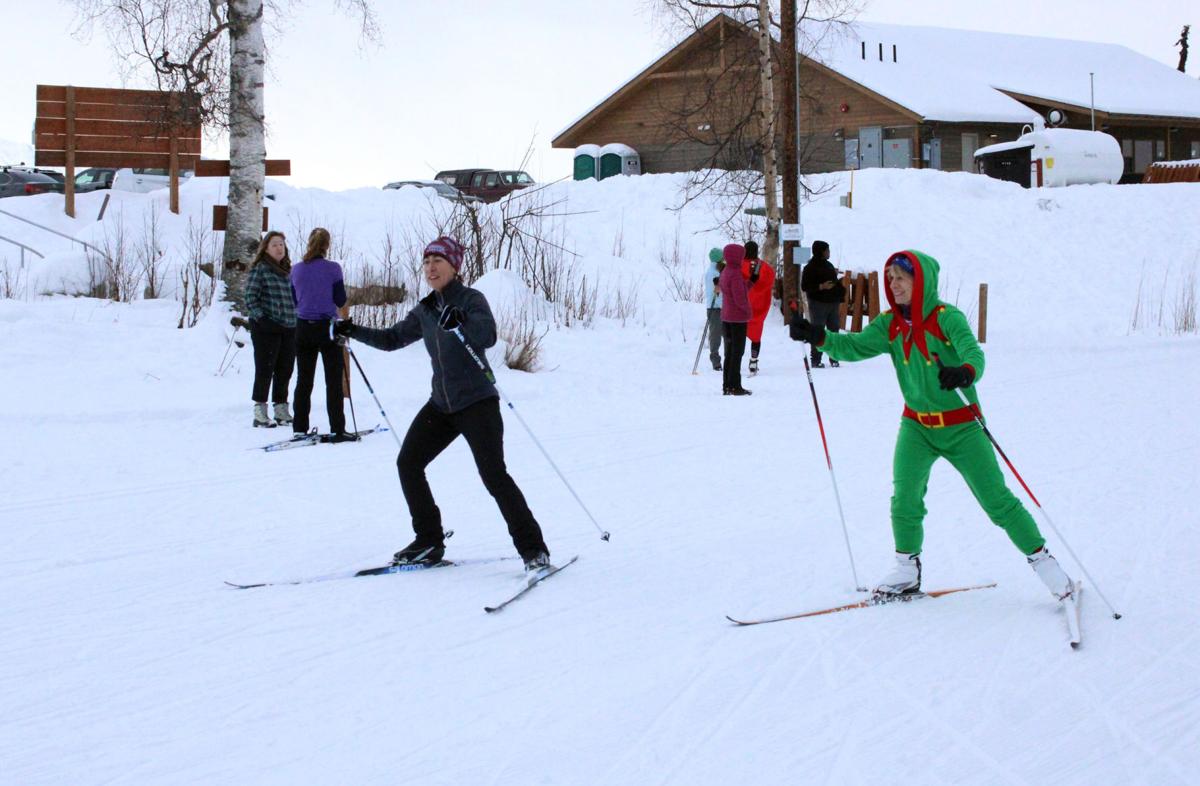 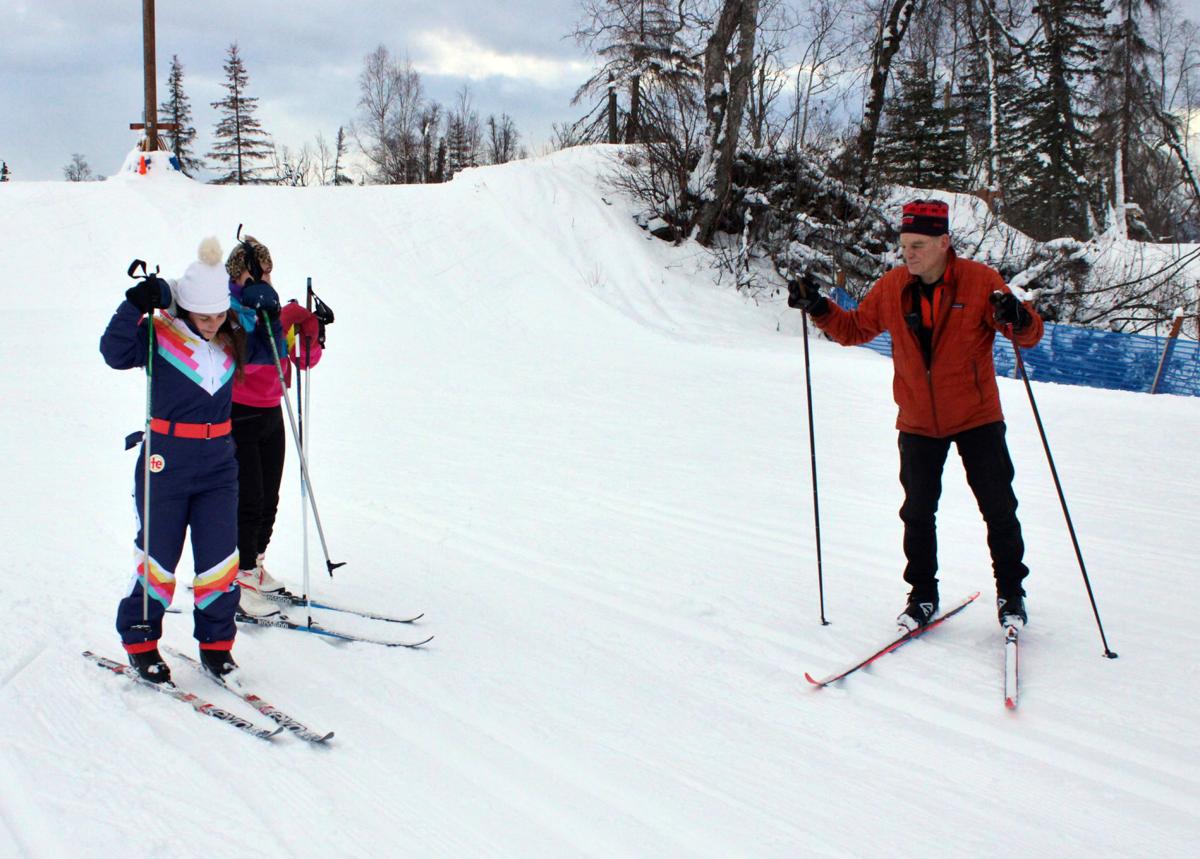 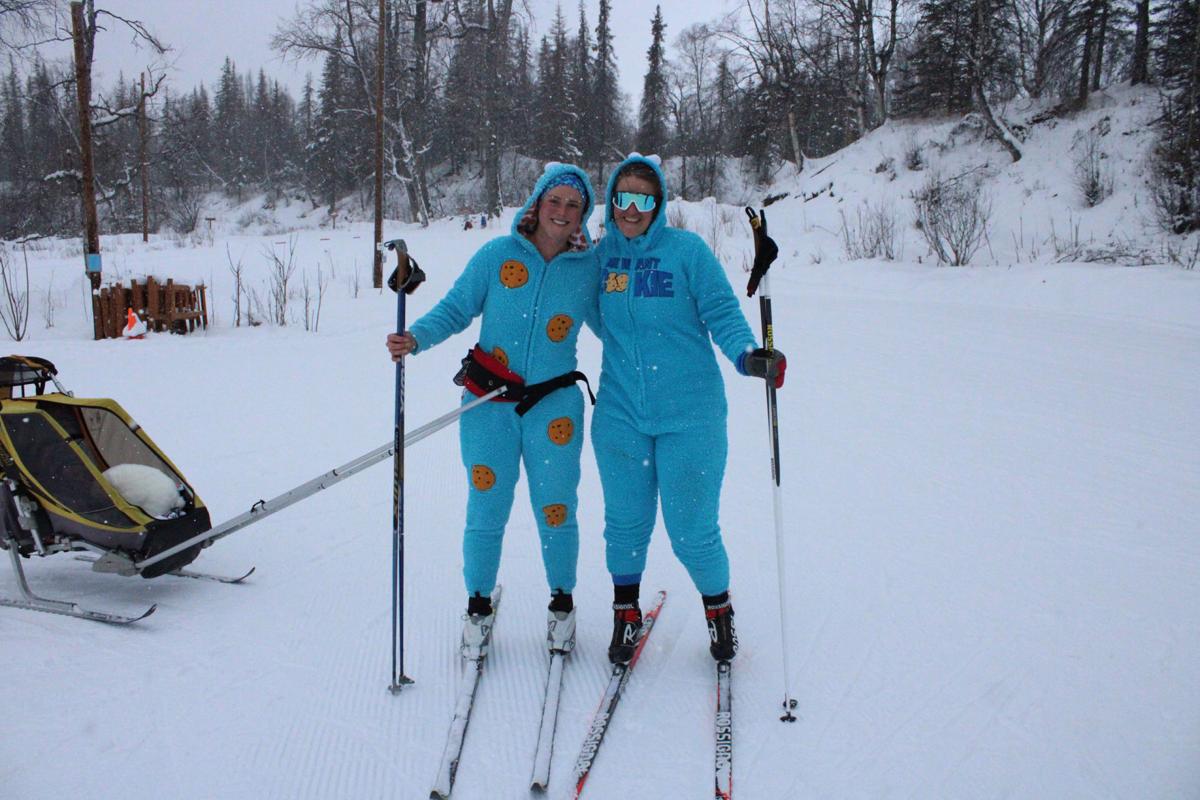 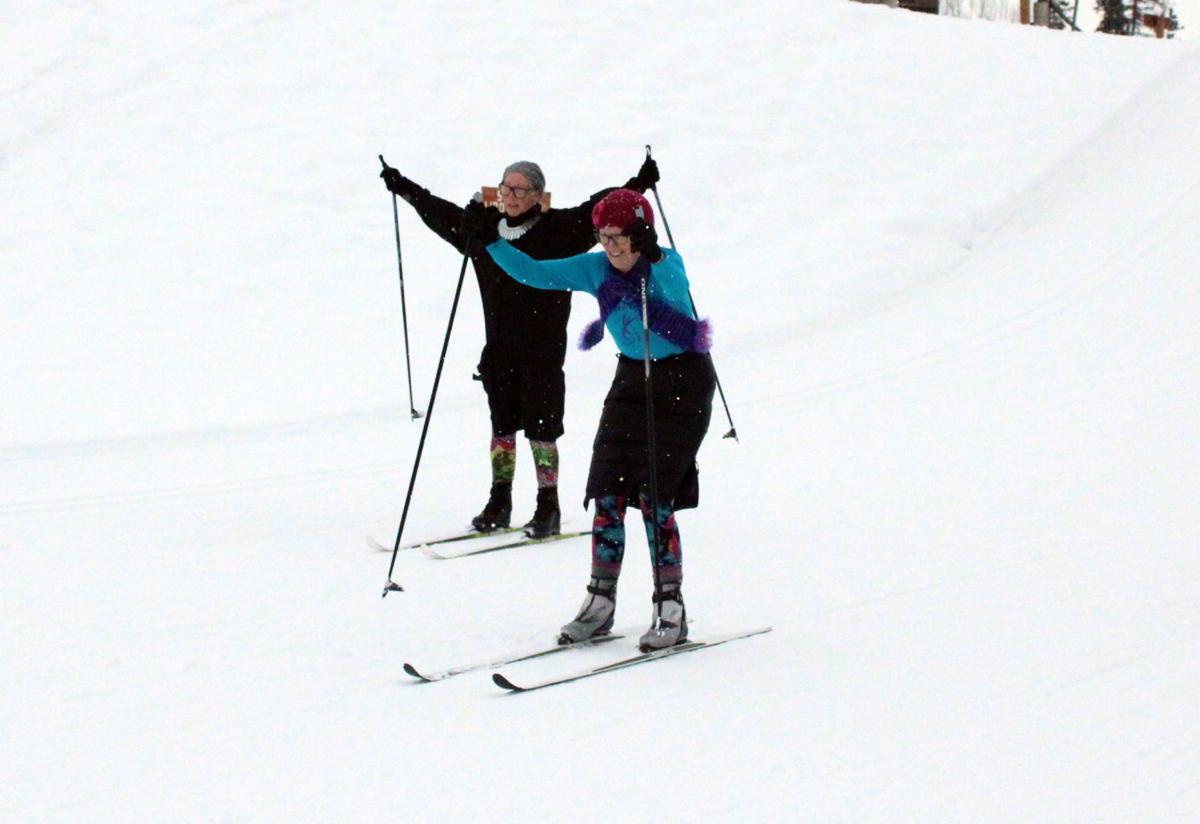 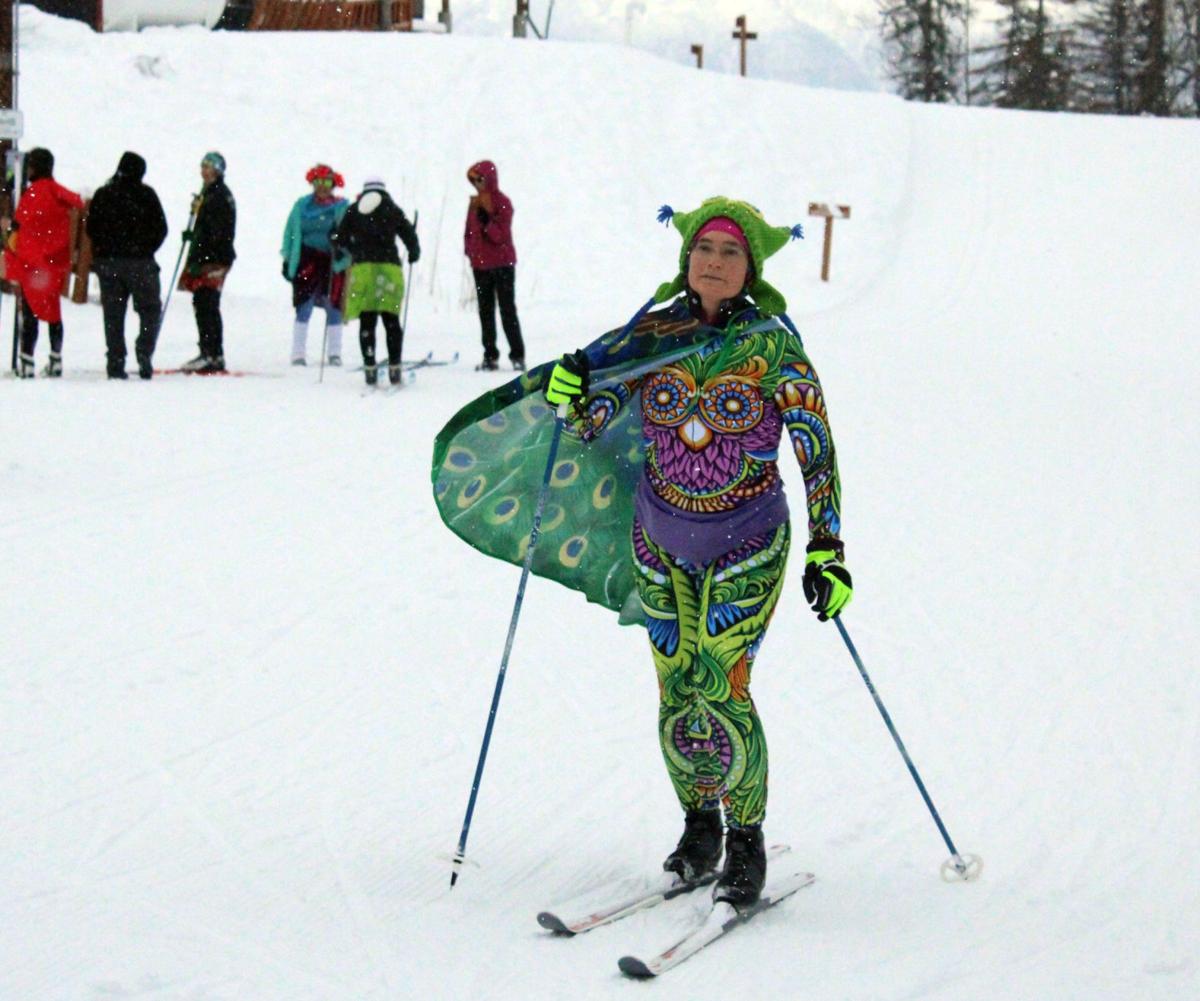 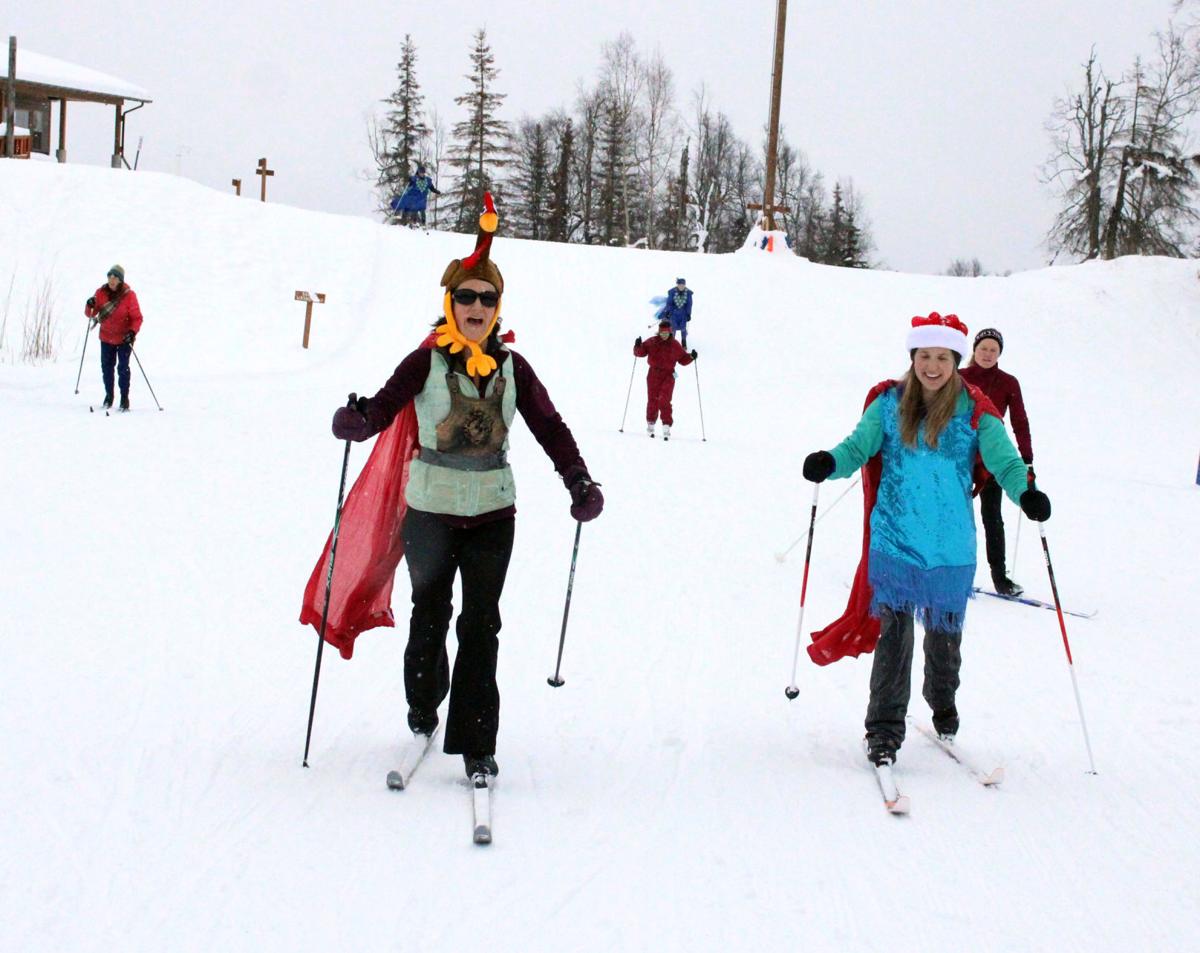 HATCHER PASS — Nearly 100 women, men, and children clicked into their skis and participated in the Ski for Women at Government Peak Recreation Area on Sunday.

The event has become a popular movement at ski courses statewide and celebrated its sixth consecutive year at GPRA on Sunday. Skiers donned their most elaborate costumes and skied either the 4 kilometer or the 1 km loop. Following the ski was a potluck and raffle of donated prizes and all donations went to support Alaska Family Services. As a junior nordic ski coach, Sydney Thileke does not often get time to ski on her own. In an estimated time of 23 minutes, Thielke crossed the finish line first in her cookie monster costume.

“It’s a cause that touches everybody and being out here with especially the young women who need to see being active, being strong, taking on challenges, I think that’s an amazing thing to be showing kids who are out here and it seems like every year there’s more and more kids that come and participate and out here, families, moms and young men. It’s a good thing. I think that’s the message and I think that’s why people turn out all over the state,” said Thielke.

Brandon Thielke came in just behind Sydney and former Palmer High Ski Coach Sue Skvorc came in third wearing a floral dress. Prior to the Ski for Women on Sunday, Skvorc brough brochures to her classroom to hand out. Jill and Shelly Warner took home the coveted Golden Pole award for best costumes with their elaborate coordinated peacock outfits.

“In 1979 following Alaska’s first state conference on the status of women, a group of women here in Mat-Su were inspired to create a safe house for women who’d experienced domestic violence and sexual assault and their children,” said AFS President and CEO Desiré Shepler.

“AFS continues to offer safety, education and advocacy to those women and their children who are impacted by trauma and violence. Last year AFS offered programs or provided programming to over 10,000 community members here in the Mat-Su.”

Shepler took over as President and CEO in June and attended her first Mat-Su Ski for Women on Sunday. AFS offers over 20 diverse programs including behavioral health, Women in Crisis, child care assistance and parenting classes. Jeannine Milne noted that getting the word out about AFS and spreading awareness of domestic violence and sexual assault is a main goal of the Ski for Women. Alaska still ranks number one in domestic violence and sexual assault.

“I think it has a lot to do with the event in and of itself. People love to ski it’s kind of made a name for itself. People wait for it,” said Milne. “It’s become a family event. That’s huge.”

Victoria Kinson skied with her sons, seven-year-old Landon and five-year-old Asher in their first Mat-Su Ski for Women. Kinson had participated in the Ski for Women in Anchorage in the past, but with her sons competing in the Mat-Su Junior Nordic program, Kinson wanted her family to be more active in the ski community. Mia Kirk wore a red angry bird costume and also skied in her first Ski for Women at GPRA. Kirk said that she was skiing for women in crisis.

“I think it’s such a terrible problem in the Mat-Su that one out of two women here have experienced sexual assault and that statistic needs to get better. I think that anything that anyone can do to support women, especially in a place where domestic violence and sexual assault is so high,” said Annika Gagnon.

Gagnon skied with the words No More written across her cheeks in glitter. Gagnon’s mother, Janel spoke at the subsequent potluck about how No More Mat-Su formed six years ago in conjunction with the Wasilla Sunrise Rotary. No More Mat-Su will host the third annual Rock the Resilience at the Glenn Massay Theater on February 26 from 6 to 9 p.m. While all of the participants in the Ski for Women helped support AFS and women in crisis, many did so with smiles on their faces while enjoying the outdoors.

“All my friends are on the couch and I’m in line. I’m going out there to get some exercise,” said 80-year-old Betty Brickel.

Brickel departed the start with Ed Strabel, who stuck around after most of the skiers had gone to help stragglers deal with equipment issues and give a crash course in cross-country skiing. Strabel was part of a somewhat large contingency of men skiing to support women. Second place finisher Brandon Thielke said that he skis by himself all week but came out to GPRA on Sunday to support AFS.

“I think the Mat-Su Ski Club has done an amazing job of tapping into that desire that still lives in our community for women to come together to build community,” said Shepler. “Seeing so many of you that I know in so many other ways, this is the original founding values of AFS in action.”

“What brings women out here is community and the opportunity to get together and just come together as a community,” said Mat-Su Ski Club President Lucas Parker.

While conditions were warm compared to the dreaded cold winter temperatures of January, snow flurried furiously for 30 minutes near the tail end of the race. While the statistics on domestic violence and sexual assault in Alaska are glum, the faces of skiers crossing the finish line were stricken with smiles as skiers enjoyed cameradirie and costumes Gail Volt finished the Ski for Women in Supreme Court Justice Ruth Bader Ginsburg costume.

“She is an amazing woman. I hope she lives for another 100 years and I wish she would run for president,” said Volt. “It’s such a good cause and it also gets women in the outdoors that normally wouldn’t. I mean there’s a lot of women out here that this is the first time they’ve skied this winter and it’s so great to see them out here and the money goes to an awesome cause.”

Following the final skier crossing the finish line, AFS hosted a potluck in conjunction with the Mat-Su Ski Club. Donated prizes were given out through a drawing and the Golden Pole award was given out to the most creative costume. After Shepler spoke about the work AFS does, Gagnon spoke about No More Mat-Su and the upcoming Rock the Resilience event. No More Mat-Su is the local chapter of the national No More movement and has been taken over by youth leaders including Career-Tech High School Sophomore Gloria Shomer who reluctantly spoke about Rock the Resilience in front of the large crowd of skiers. Shomer said that she joined No More Mat-Su because she wanted to become more involved in the community. Rock the Resilience is entering its third year with student performances at the Glenn Massay Theater. In the first year, performances centered around consent and the theme last year was to answer the question what is love. At the Rock the Resilience event on February 26, this year’s theme will be R-E-S-P-E-C-T. AFS began in 1979 and is celebrating their 40th year serving women and children in the Valley and the AFS 24-hour crisis line can be reached toll-free at 1 (866) 746-4080.