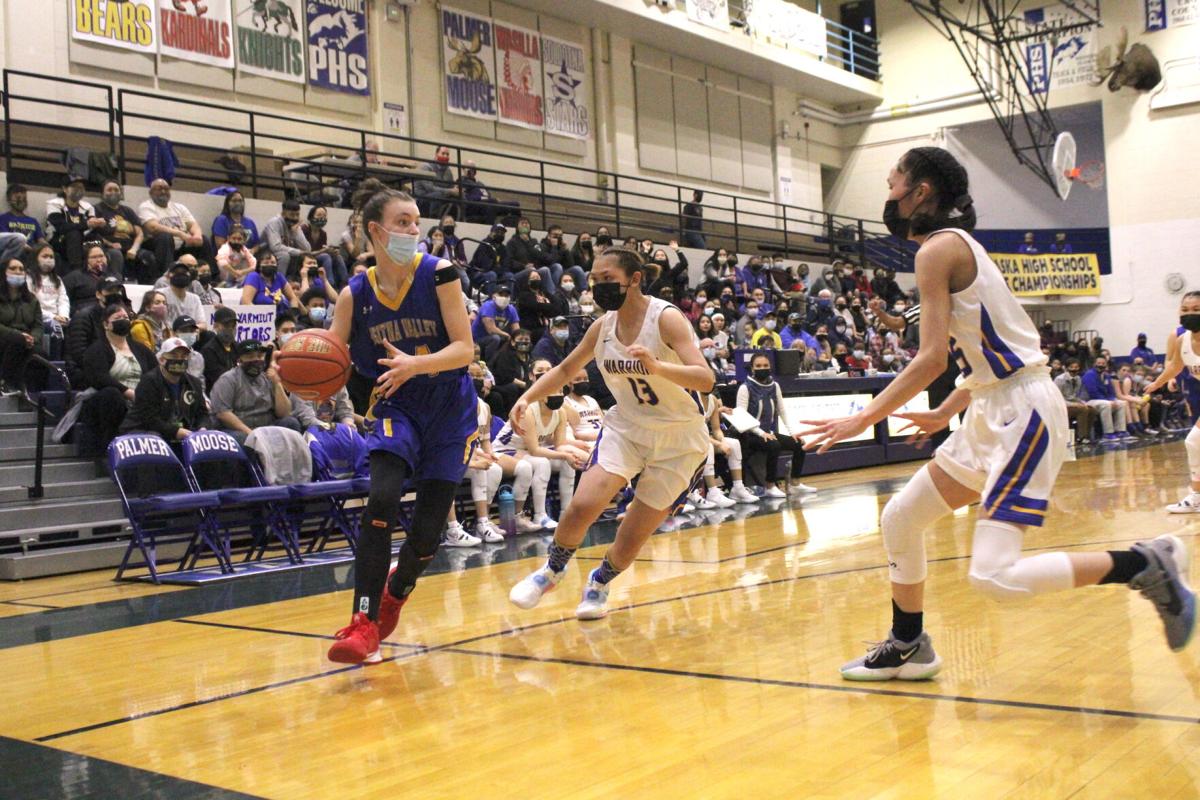 Susitna Valley's Cori Gossett drives the base line during a loss to Hooper Bay in the 2A girls state title game. 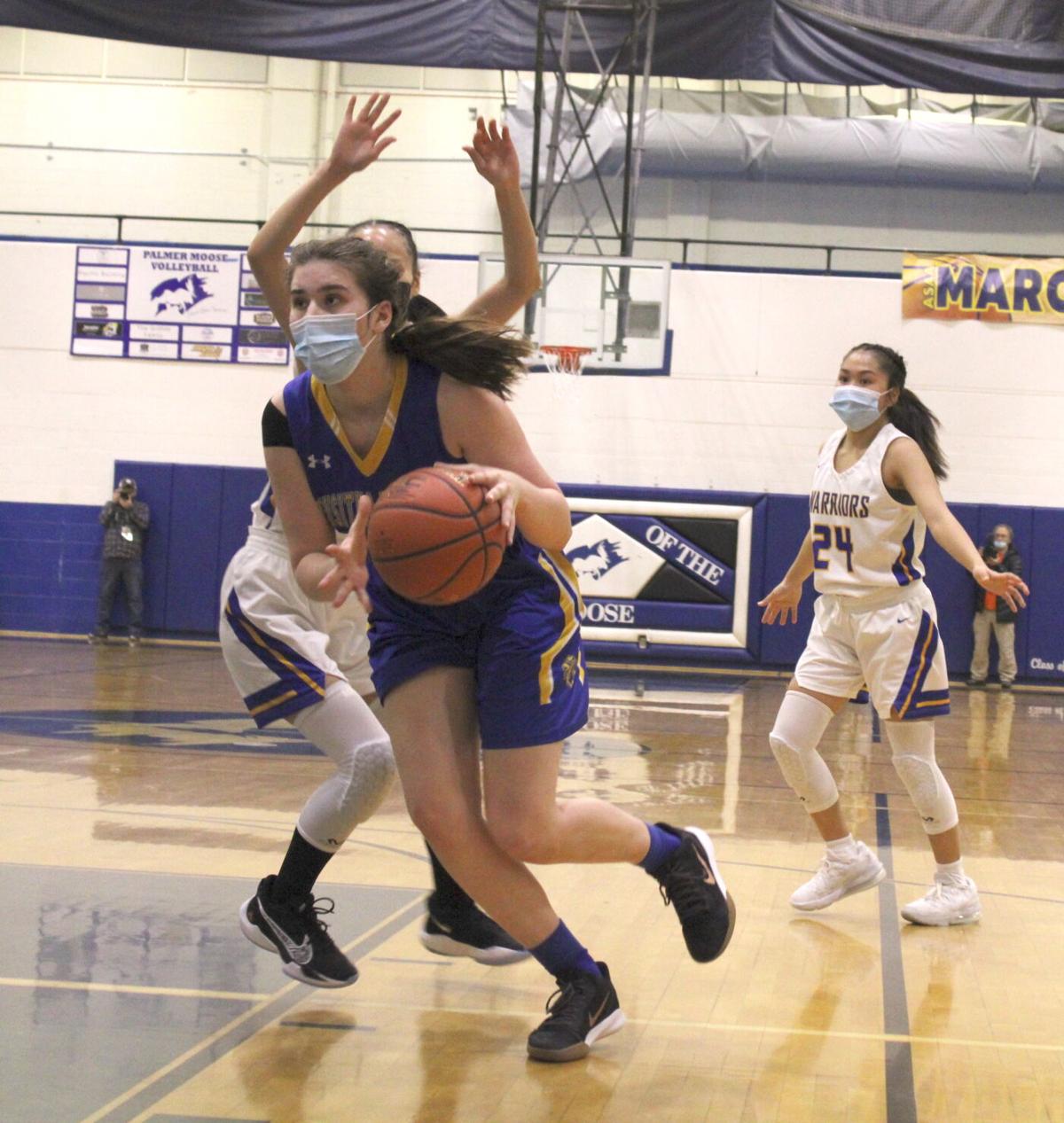 Susitna Valley's Kenna Grenier drives to the basket during a loss to Hooper Bay in the 2A girls state title game. 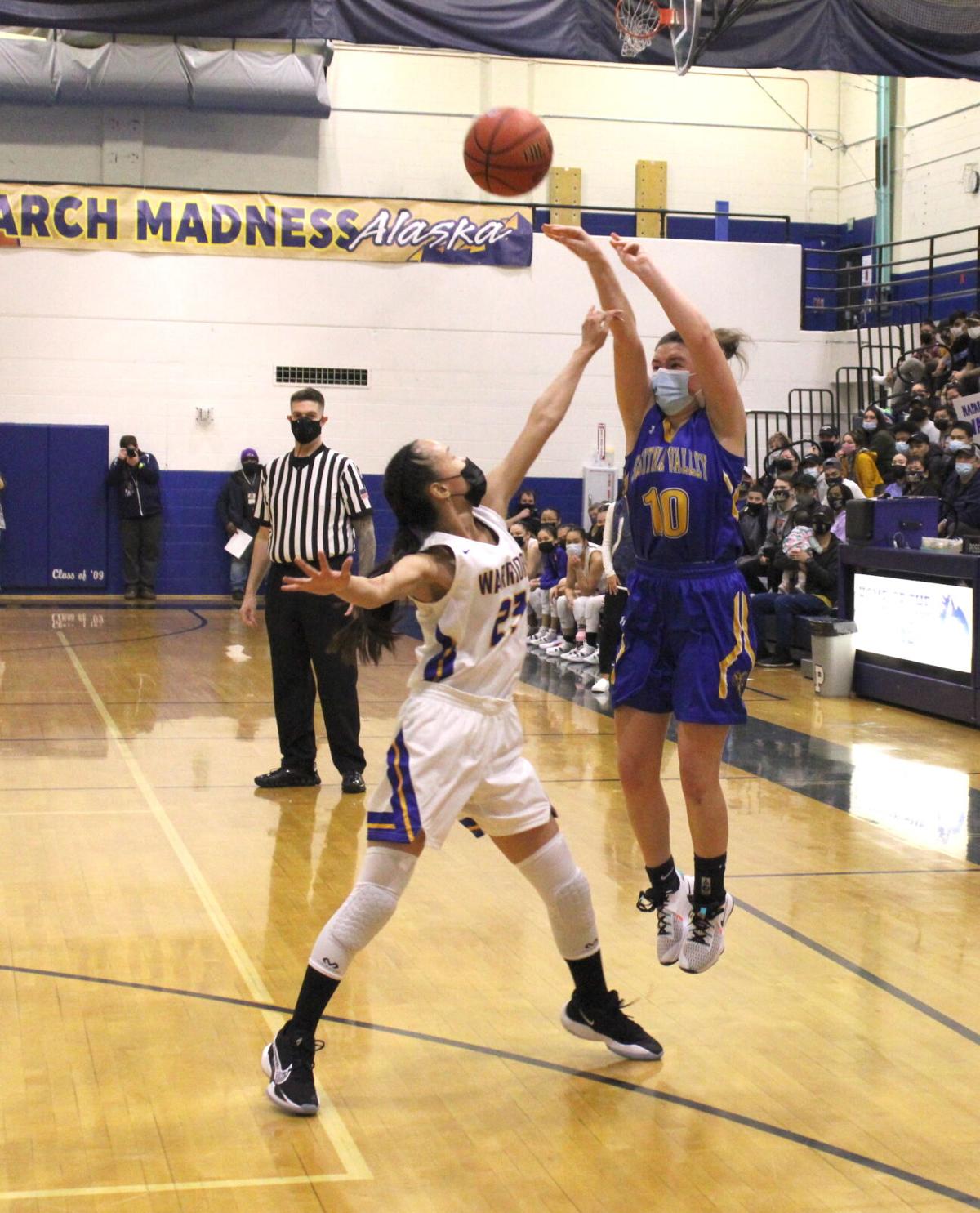 Susitna Valley's India Roderick fires a three-pointer during a loss to Hooper Bay in the 2A girls state title game.

Susitna Valley's Cori Gossett drives the base line during a loss to Hooper Bay in the 2A girls state title game.

Susitna Valley's Kenna Grenier drives to the basket during a loss to Hooper Bay in the 2A girls state title game.

Susitna Valley's India Roderick fires a three-pointer during a loss to Hooper Bay in the 2A girls state title game.

PALMER — The Susitna Valley High School girls basketball team made history as the first SVHS girls basketball team to ever play in the 2A state championship on Saturday night. The Rams fell just short in their first appearance in the state tournament in over 30 years with a 36-32 loss to Hooper Bay in what was a thrilling, competitive game from start to finish.

“I’m so proud of the girls, not just tonight but all season. Tonight they worked really hard. Yes, we could’ve played better but we also were playing a really good team,” said Su Valley head coach Jimmy Sickler. “I could not be prouder of them. I’m thankful for them, I’m also thankful for our fans that showed out big time tonight for us in the championship game and the support that our community gave us. We were overwhelmed with the support that we’ve received from our friends and family and that was really awesome for us and for the kids.”

“Our goal was to not hold for last shot because our goal was just to look for our best shot opportunity in that moment and to get the lead, but to be really patient and work the clock,” said Sickler.

As the game heated up in the fourth quarter, the Palmer High School gym became incredibly loud. Nearly the entire section of bleachers on the east portion of the PHS gym was full of Hooper Bay fans who erupted with every Warriors made basket. A smaller contingent of mostly high school students from Talkeetna countered the Hooper Bay fans with cheers and jeers of their own. Su Valley had the ball with 1:04 left on the clock as the game was tied at 32 after Grenier’s layup, but were unable to create a good shot opportunity at the basket. Following the rebound by Hooper Bay, sophomore Emma Kehoe sneakily made her way behind the ballhandler and stole the ball. With 11.2 seconds remaining, Su Valley took possession and took a timeout with one last chance to tie or win the game on their final possession.

“It was really India Roderick our captain and Kenna Grenier our other captain who’s a junior and Kenna who’s a senior that really led us all season long. When they were in the game we were more confident. Everything that they do kind of fuels us and gives us that confidence to be aggressive and to have success,” said Sickler. “We had some big defensive plays from the player of the game Bethany Kehoe and then her sister Emma Kehoe also.”

Su Valley’s forwards Kenna Grenier, Alana Barron and Cori Gossett caused trouble for Hooper Bay players hoping to get clean looks at the hoop from inside the paint, stretching their arms over the shorter players on the other team. However, Su Valley made just one three-pointer while Hooper Bay sank four from long range.

“It was tough on the players, but our kids, our girls are so resilient. They never complained about any of that stuff and it was kind of weird the stop and go part of the season,” said Sickler. “We were worried about our conditioning and things like that but everybody else is dealing with the same things that we were dealing with. It was awesome for our kids to be able to even have a season. We were thankful for every single day that we were able to play basketball so we didn’t even know if this day would come, so mostly thankful.”

Barron, Grenier and India Roderick all were selected to the All-Tournament team for Su Valley.